Accessibility links
As Bush Campaign Goes Down, The Knives Come Out A fundraiser for the pro-Bush superPAC Right to Rise USA blasted the campaign strategy in an NPR interview. Now, he's accused of having an ax to grind against Bush's campaign manager.

As Bush Campaign Goes Down, The Knives Come Out

As Bush Campaign Goes Down, The Knives Come Out 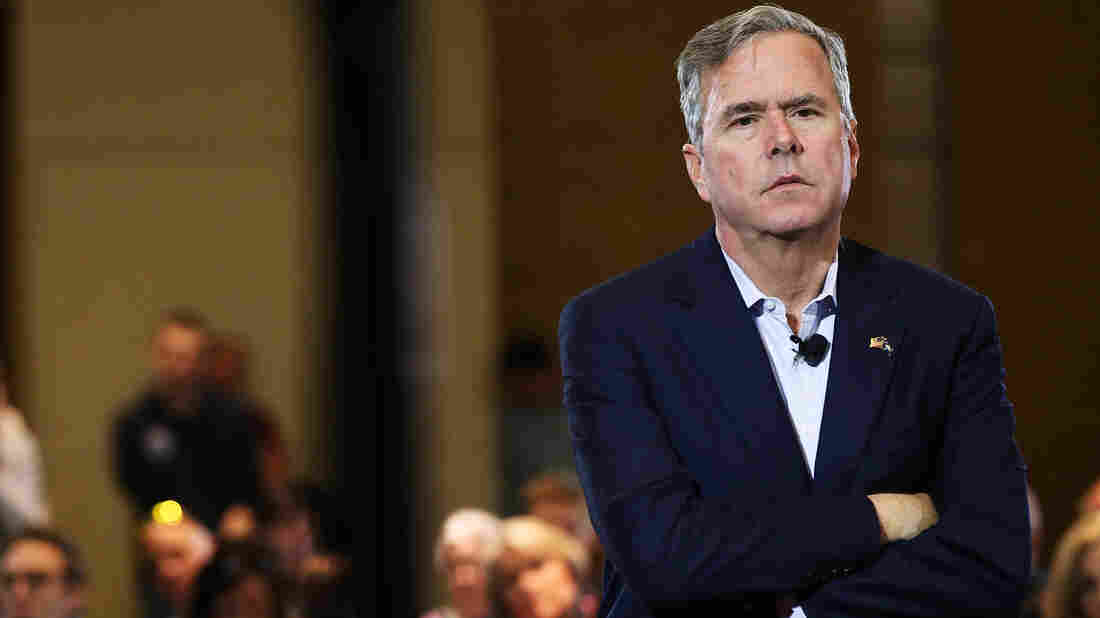 Jeb Bush speaks to an audience of voters on Feb. 18 in Columbia, S.C. Bush dropped out of the GOP presidential race two days later, after finishing a distant fourth in the state's primary. Spencer Platt/Getty Images hide caption 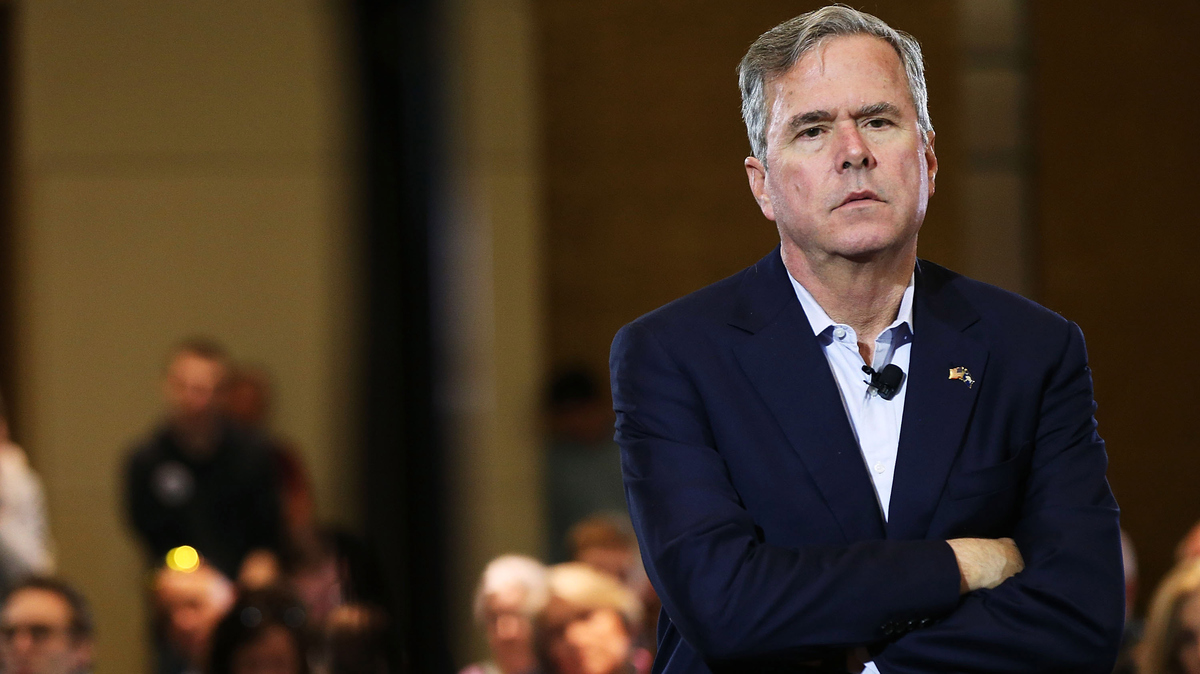 Jeb Bush speaks to an audience of voters on Feb. 18 in Columbia, S.C. Bush dropped out of the GOP presidential race two days later, after finishing a distant fourth in the state's primary.

With Bush Out Of the Race, A Massive War Chest Is Up For Grabs

With Bush Out Of the Race, A Massive War Chest Is Up For Grabs

It's never clear what the truth is when a campaign ends, but it gets ugly.

Major fundraisers are among the people who are key in creating a campaign. And when campaigns fold, they talk sometimes — usually in blind quotes.

But one of the funders, who helped raise millions of dollars for a superPAC supporting Jeb Bush, talked on the record with NPR's Morning Edition -- and gave his version of what he felt went wrong.

"I think the campaign was winnable, and we lost," Jamie Wareham, a Washington, D.C., lawyer, told NPR's Steve Inskeep on Tuesday. Wareham donated more than $40,000 to Right to Rise USA and helped the group rake in cash from other donors.

Questions abound about whether it was the campaign, the superPAC or, as is usually the case, the candidate himself who was to blame. Bush has been criticized for being too slow to respond to a campaign that was different from the one he — and almost everyone else — expected. No one foresaw the political force Donald Trump would be, and Bush — and every other candidate, for that matter — had difficulty knocking the seemingly underqualified Trump off stride.

Above all, Bush seemed to be the victim of a Republican Party that may be fundamentally changed from the one that elected his father and brother president. But Wareham still felt, maybe wished, the campaign could have done something, anything to change the dynamic.

"I hoped there would be a change at the top when in the early, midsummer it was clear we had the wrong people leading the campaign," Wareham said, referring to when Trump began his rise.

Wareham put the onus on campaign manager Danny Diaz, who joined as campaign manager in the summer of 2015. "He lacked the temperament," Wareham charged. "His major accomplishment prior to being hired was losing the Ken Cuccinelli campaign in Virginia. So he had no successful experience. Though he did have experience."

Cuccinelli was the unsuccessful Republican nominee for governor of Virginia in 2013. Diaz, a veteran hand of four presidential campaigns and a former Republican National Committee communications director, certainly has more experience than one failed race.

Though he has never run a presidential campaign, and only a few have run successful ones, he helped elect Republican Govs. Doug Ducey of Arizona and Susana Martinez of New Mexico. He also became known as a "fixer" on Senate campaigns, helping elect Sen. Mark Kirk of Illinois.

A former campaign operative familiar with the situation accused Wareham of having an ax to grind. "Within the campaign, James Wareham was well-known as a malcontent who routinely sowed problems and required significant levels of handholding," the former operative said.

The operative added that Wareham "became largely intolerable when his personal friend — the campaign's previous chief operations officer — was dismissed for subpar performance. Wareham represents everything that's wrong with politics, someone whose self-anointed importance drives their every action and decision."

NPR reached out to Wareham for response.

"Sadly, this type of sophomoric, self-possessed intemperance is illustrative of the atmosphere Mr. Diaz created inside what was supposed to be a joyful campaign," Wareham said in an email. "My views are anything but personal. Indeed, they are shared by dozens and dozens of loyal Jeb supporters who for many months held their tongues out of concern they might possibly harm Gov. Bush. Mr. Diaz always seemed to think the campaign was somehow about him. In the end, it largely was because the candidate who is, by far, the most qualified person to run this country in such hazardous times is no longer in the race, in large measure, because of Mr. Diaz's incompetence."

Other veteran Republican operatives are coming to Diaz's defense.

"Danny Diaz did the best he could do in a very tough environment," Matt Rhoades, who ran Mitt Romney's 2012 presidential campaign, told NPR. "While Jeb Bush did not win the nomination, Diaz stayed loyal to his principal to the end, and that speaks volumes of his character."

Brian Jones, a former senior aide to the Chris Christie presidential campaign, said, "Danny is a gifted political strategist and manager, pretty much without peer in the Republican Party. Gov. Bush was lucky to have Danny at the helm of his campaign, just like the last three GOP presidential nominees were fortunate enough to have him working on their presidential bids.

"It's always unfortunate and a little sad to see people lash out at the conclusion of a campaign, particularly when they were removed from what was happening on a day-to-day basis."

As Bush and his team laid plans for the 2016 Republican primaries, they set out to have the best-financed superPAC ever. And for a time, they did. Right to Rise USA, where Wareham's money was actually going, raised $118 million, and spent $87 million on advertising, even as Bush never came close to winning a primary. That's almost triple the campaign's budget.

The superPAC's advertising and messaging strategy has had its critics. The fundraising strategy was audacious: Pull in millions of dollars in unlimited contributions before Bush even became a candidate. That way he could hit up donors himself, something that the law would prohibit once he announced.

The campaign strategy was audacious, too. Jeb! 2016, the official campaign committee, essentially outsourced its media operation to the supposedly independent superPAC. This was more responsibility than any other presidential superPAC had, either this cycle or in 2012, the first presidential election after federal courts sanctioned superPACs.

It was an arrangement with "the candidate sort of doing a lot of the groundwork, and visiting and talking with people, but the superPAC doing a lot of the media," said Michael Franz, a political scientist at Bowdoin College in Brunswick, Maine, and co-director of the Wesleyan Media Project, which tracks TV advertising in the presidential campaign.

He added, "That model doesn't seem to be one that will likely be replicated."

That's because it backfired. "The sort of nimbleness is lost when you're doing the division of labor," Franz said in an interview. "Even though there's a lot of money coming into the superPAC and it's unconstrained, that doesn't necessarily mean the messaging is going to be effective."

It also meant less money going to the campaign, which lagged behind the official fundraising of several other GOP campaigns, to the point that Diaz, the campaign manager, went unpaid since October.

The superPAC's biggest failure: It took months to figure out how to deal with Trump's precedent-breaking candidacy. Other candidates were equally slow on the uptake. In the Bush operation, the result was that as Trump grabbed all the media attention, Right to Rise USA was spending its TV budget on soft-sell biography spots when it could have been attacking front-runner Trump.

"You look back and think about how some of that money could have been used to educate people on Trump's real position on a lot of issues, as opposed to effectively ignoring him and expecting it would go away," Brian Walsh, a Republican consultant and strategist, told NPR.

"In hindsight, obviously, that turned out to be a strategic error."

Ironically, one of the lessons of the 2012 presidential campaign was that Romney never took hold of his biography with early positive ads — and that left it to opponents to define him. Bush's team and supporters weren't going to make that same mistake with their candidate, who, similarly, was an early clear front-runner with a big potential problem — his last name.

But all of this doesn't mean superPACs don't or can't work — or that big money isn't important anymore.

For example, Florida Sen. Marco Rubio, who is still in the race, has both a superPAC and a tax-exempt "social welfare" organization supporting him. (The social welfare group isn't required to disclose its donors.)

And Right to Rise USA didn't act as if it was hurting for cash — at least not until this month. An NPR analysis of federal data shows the superPAC's TV spending peaked last October at $18 million, then again last month at $29 million. In February, TV spending fell to barely $5 million.

"It still comes down to a handful of wealthy people," said Kent Cooper, a founder of the website Political Money Line, which compiles campaign-finance data. "It's just a huge impact on the presidential race, as opposed to the millions of voters around the country."

Many have asked whether any amount of money, though, could have helped Bush do better in the current political climate.

"If spent well, it could have made a huge difference," Wareham told Morning Edition in defense of the former candidate. "And he did everything that a candidate could possibly do. This concept that he was low energy is despicable. Nobody in this race had more time commitment, more energy than Jeb Bush."

As of Jan. 31, Right to Rise USA reported $24 million cash on hand. Since then, it has disclosed $22 million in expenditures on political messages, mostly in New Hampshire, South Carolina and Nevada. Its report of money raised in February isn't due until March 20.

There are costs to closing down a superPAC, mostly bills from lawyers and accountants. But there are no rules about what to do with leftover cash.

Right to Rise USA treasurer Charles Spies told NPR that no decision has been made about excess cash.

As for a donor like Wareham, he still wants to beat Trump. After ticking through the candidates left in the race, he said, "You are kind of left with two folks that have solid records and are possibilities for everyone in a similar situation to me — they are John Kasich and Marco Rubio."

The Ohio governor and Florida senator are drawing support from many mainstream Republicans. What about Trump?

"I don't see him playing well in many states coming forward," Wareham said, perhaps more hopeful than anything else, as polls in upcoming GOP primary states give Trump an early edge in many states.