Accessibility links
Revived Streetcars May Be On Track For Disappointment New York City plans to add streetcars to connect its isolated areas, but critics are wary. Streetcars in other cities have few riders, and Washington, D.C.'s streetcar opening was delayed for years. 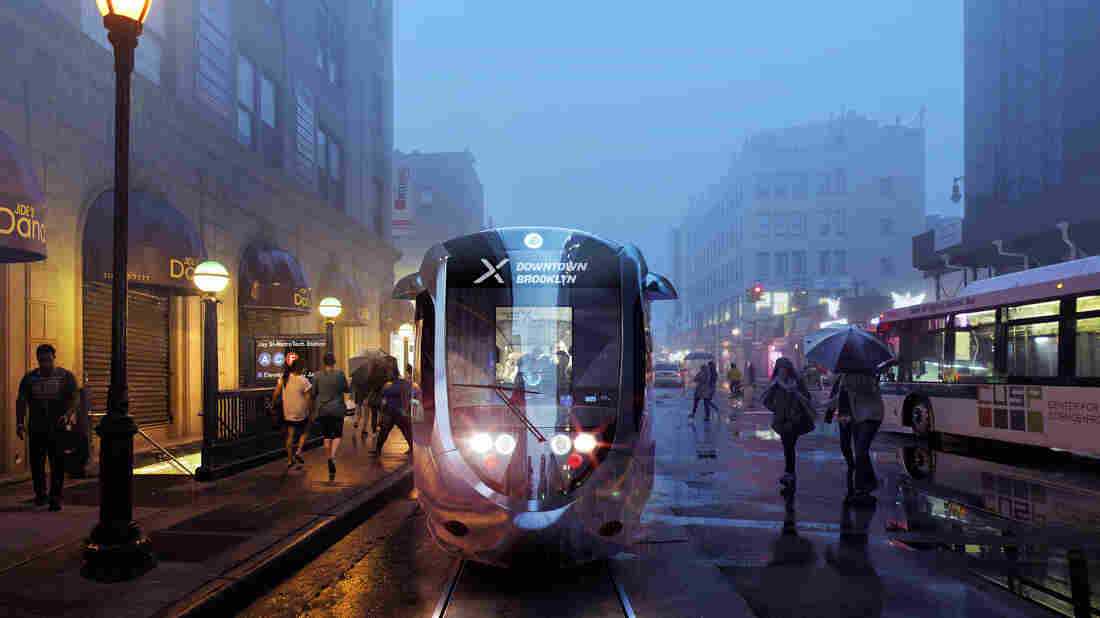 New York Mayor Bill de Blasio recently unveiled details of his plan to build a streetcar connecting Brooklyn and Queens. Above is a rendering of the proposed streetcar line. Friends of Brooklyn Queens Connector hide caption 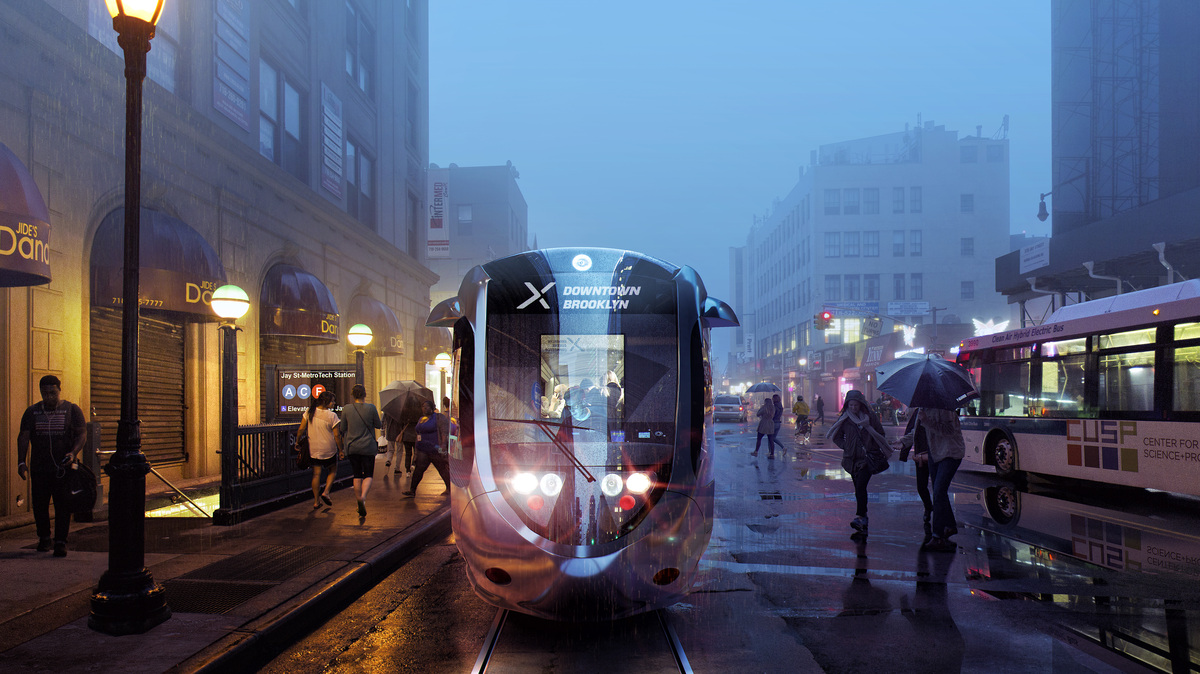 New York Mayor Bill de Blasio recently unveiled details of his plan to build a streetcar connecting Brooklyn and Queens. Above is a rendering of the proposed streetcar line.

Streetcars are rumbling back to life in cities across the country from Portland to Salt Lake City and Atlanta, with New York becoming the latest city to hop on the bandwagon. But as these new streetcars run into unexpected roadblocks, critics say this mode of transportation might not be the answer to great public transit.

New York City has an ambitious, multibillion-dollar plan to connect Brooklyn and Queens with a streetcar. It would bring convenience to residents from Red Hook, an isolated area cut off from the rest of Brooklyn by water and a major highway.

"There's only really one way into Red Hook, and that's it," says Jackie Soto, who lives in one of several big public housing developments in the neighborhood. "We only have the buses that come in and out." 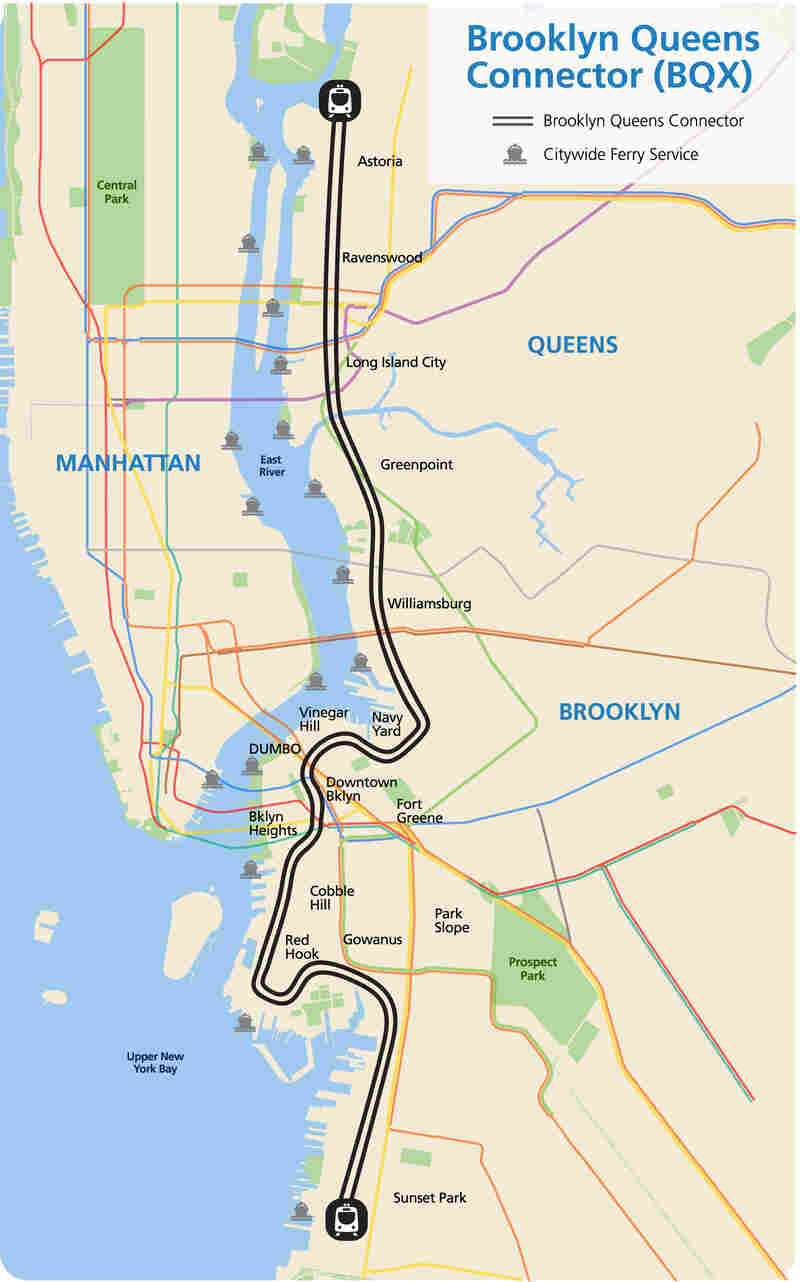 The Brooklyn-Queens Connector is a 16-mile-long streetcar line that will cost $2.5 billion to build. City of New York hide caption

Soto says it's a long walk to the nearest subway station and the buses are slow. Another resident, Nicholas Aviles, says he'd rather walk to his job than take the bus. He says he would love to see more public transit options to connect Red Hook with the rest of the city.

"It is a good idea ... right now I'm walking to work all the way over there," he says. "I could be taking that to work."

That's exactly what New York Mayor Bill de Blasio has in mind. This month, the mayor unveiled some details of his plan to build a 16-mile streetcar connecting waterfront neighborhoods in Brooklyn and Queens, including some of the fastest-growing parts of the city.

"This will create connections between many neighborhoods, it will connect them all to each other in a way that's never been true before," he says. "Every time we give people more options, it not only makes their lives better, it gives them more access to jobs, it makes their commute shorter."

The $2.5 billion plan has the backing of some public transit advocates and some prominent real estate developers whose property values will rise if the streetcar gets built. But not everyone is on board.

"This isn't really a mobility enhancing technology," says Marc Scribner, a research fellow at the Competitive Enterprise Institute in Washington, D.C. "This is a government subsidy to property developers."

He points to other streetcar systems around the nation that never got up to speed — including the D.C. Streetcar, which is set to begin carrying passengers this weekend after years of delays. For months, empty cars have been rolling up and down H Street in an extended safety test. Scribner blames the troubled rollout on poor planning by the city.

He says streetcars are hard to maneuver in traffic. Any streetcar that has to share the road with cars and buses is inevitably going to be slow and unreliable. He points to Atlanta's streetcar as an example. 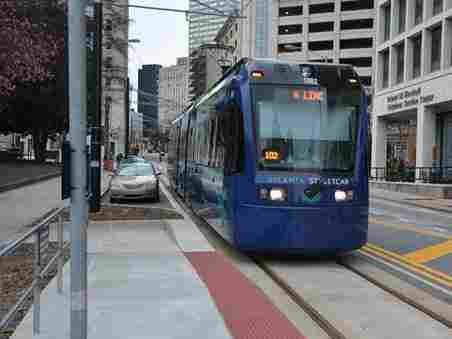 A streetcar approaches Edgewood Avenue in downtown Atlanta. Atlanta's streetcar system opened in 2014. Ridership has been disappointing, and the system is seen as too slow to be useful. Samuel Whitehead hide caption 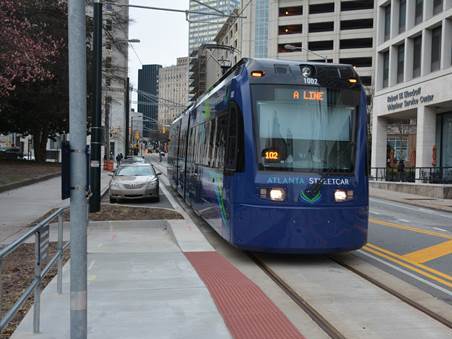 A streetcar approaches Edgewood Avenue in downtown Atlanta. Atlanta's streetcar system opened in 2014. Ridership has been disappointing, and the system is seen as too slow to be useful.

That system opened in 2014. Ridership has been disappointing, especially since it started collecting a fare earlier this year. Some riders complain the streetcar is just too slow to be useful.

"Sometimes it is a little quicker to walk," says Atlanta resident Amber McQueen. She commutes on the streetcar anyway, but she is surprised at how few other riders she sees.

"I'm really trying to figure in my mind how are they able to operate it with so little traffic? It's not a lot of people who use it," McQueen says.

Even public transit advocates are having their doubts. Jarrett Walker, a transportation consultant in Portland, Ore., says while the city's streetcar spurred major investments downtown, it has not lived up to the hype. Portland is widely credited with launching the streetcar revival more than a decade ago.

"Streetcar is one of those really problematic words because the real estate industry loves it. But more and more, transit advocates are looking at what's been built in the name of streetcar revival and saying no, this isn't durable, long-term, great public transit," he says.

Transit officials in New York say they have learned from problems in other cities. They say the proposed streetcar in Brooklyn and Queens will have its own dedicated lane for much of its length. If it doesn't, skeptics warn that New York may be starting down a road to disappointment.

Previous audio and Web versions of this story incorrectly said that Jarrett Walker supports a light rail system for New York City. In fact, he has not taken a position on the city's proposed streetcar.