Accessibility links
#FreeKesha Puts A Legal Battle In A Public Spotlight The pop singer claims she was sexually abused by her producer and wants out of her contract with him and her record label. On Friday, a judge said no — and set off a storm of responses online. 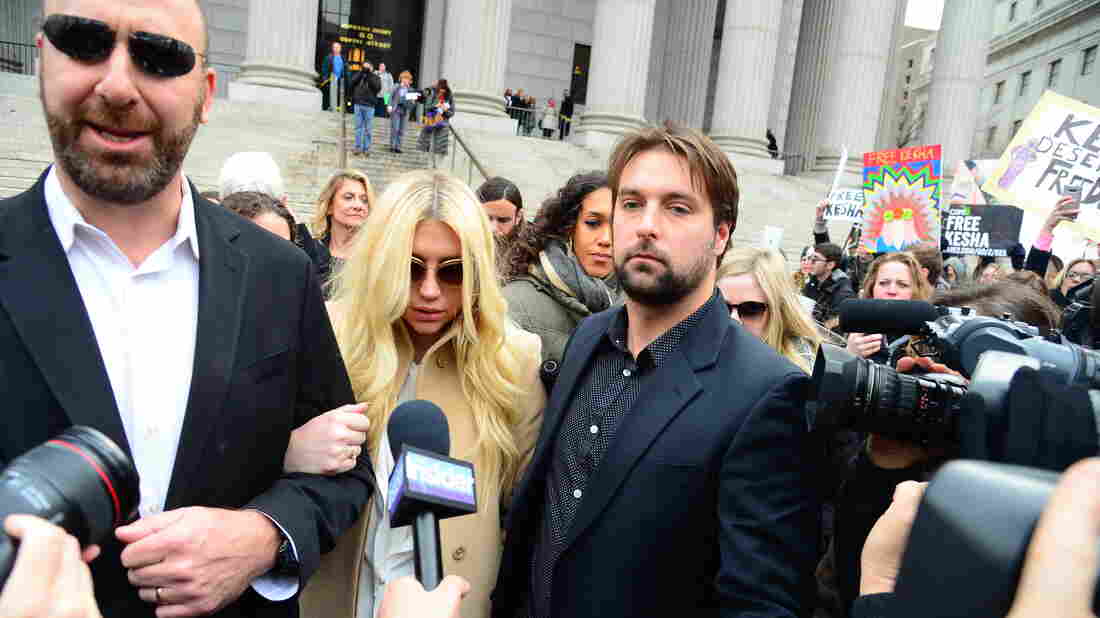 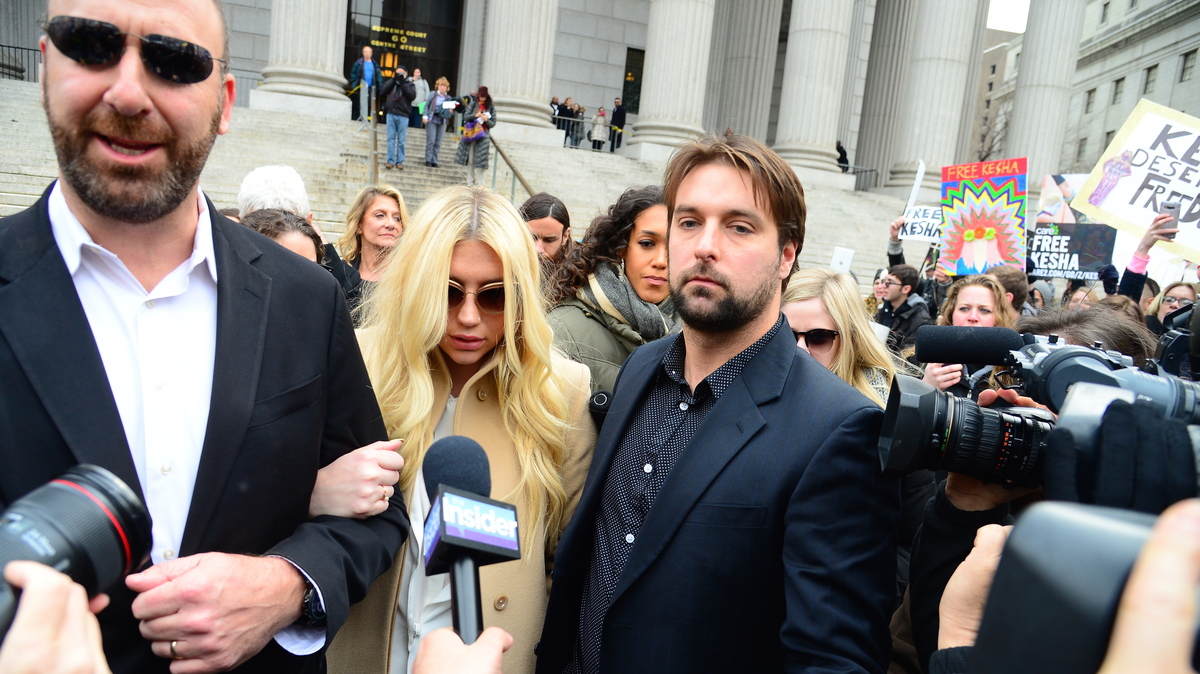 The Twitter hashtag "#FreeKesha" has gone viral. The pop singer is not actually imprisoned, but she is trapped in a recording contract with Sony. It's not an unheard of battle in the history of music. But the reason Kesha wants out is different: She says she was sexually abused by her producer for years.

When a judge said no, Kesha's fans made their opinions heard.

Supporters chanted in front of the courthouse. Taylor Swift sent the singer a check for $250,000. Lady Gaga, Miley Cyrus and Kelly Clarkson voiced their support on social media. MTV announced that it "stands with" Kesha.

There are people all over the world who love you @KeshaRose. And I can say truly I am in awe of your bravery.

Trying 2 not say anything since I can't say anything nice about a person... so this is me not talking about Dr. Luke https://t.co/lLhtUHbmgG

We stand with @iiswhoiis. Learn more at mtv.com/news. #FreeKesha

Lena Dunham wrote in her newsletter that the case "highlights the way that the American legal system continues to hurt women by failing to protect them from the men they identify as their abusers."

This is an old story in show business. A young artist signs a contract. They have some success; they might even get famous. Then, they want out of that contract.

Kesha signed a six-album deal with Sony. She has already delivered two albums to that label; according to her contract, she owes them four more albums. A pop album typically takes somewhere between one and three years to make, so the 28-year-old could be tied to Sony for somewhere between four and ten — or more — years ahead.

"I think it's interesting because it shows the general public a peek behind the curtain," says Julian Petty, head of the entertainment practice at the law firm Nixon Peabody. He says what's different about this case is how publicly the battle has played out.

"I don't think, for the most part, the public knows just what goes on with recording agreements," he says. "Just how sophisticated they are, what is involved in creating a star, what sort of resources are put into creating a star, and the lengths at which a company will go to keep that star because they've invested quite heavily in them."

Kesha Rose Sebert has been under contract with Sony for a decade. She told NPR in 2012 that she was committed to a career in music. She'd never considered doing anything else.

"I've never really believed in having a fallback plan," she said in the interview, "I always knew this was what I was going to do."

Until 2014, that commitment seemed to be working. Kesha had a string of hits, including "Tik Tok," a song that celebrated a party-all-the-time lifestyle.

The lawsuit paints a very different picture: "For the past ten years, Dr. Luke has sexually, physically, verbally and emotionally abused Ms. Sebert," it reads, in part. Kesha asked the court to let her out of her contract and end her relationship with Sony. Sony said it would allow Kesha to record without Dr. Luke present, but Kesha wants to end relationship completely.

While that lawsuit was in progress, Dr. Luke countersued the artist (and her mother) for defamation and breach of contract. A New York judge has sided with Sony and Dr. Luke for now.

But Julian Petty says the #FreeKesha movement could have an impact — the publicity might make Sony more willing to come to a settlement outside of the courtroom — but it probably won't do much to convince the label to drop the contract completely.

"If that is undercut, that pretty much destroys the foundation of the music industry." he says. "Because why would anyone invest all this capital if they can lose all these rights in an act?"

Dr. Luke's lawyers said in a statement that Sony Music has already spent over $11 million promoting Kesha, and that they are "committed to continuing to promote her work."

In a series of tweets, Dr. Luke defended himself against Kesha's allegations and commented on the support she has received.

"Until now I haven't commented on the lawsuits," he posted, "which should be resolved in court not here on Twitter."

I understand why people without all the information are speaking out. I can appreciate their compassion.

But lives can get ruined when there’s a rush to judgment before all the facts come out. Look what happened at UVA, Duke etc.

"It's sad that she would turn a contract negotiation into something so horrendous and untrue," he continued, "But I feel confident when this is over the lies will be exposed and the truth will prevail."

Kesha's lawyers declined to speak to NPR for this story. The judge in the case is waiting to hear more evidence before ruling further.

Previous audio and Web versions of this story did not make clear that Kesha does not want to record with Dr. Luke's label Kemosabe, which is a subsidiary of Sony.