Accessibility links
The 10 States Where Millennials Could Sway The Election Young people don't vote, right? Political campaigns often dismiss young folks, but a new index suggests they could tilt the balance of power in key states this election.

The 10 States Where Millennials Could Sway The Election

The 10 States Where Millennials Could Sway The Election 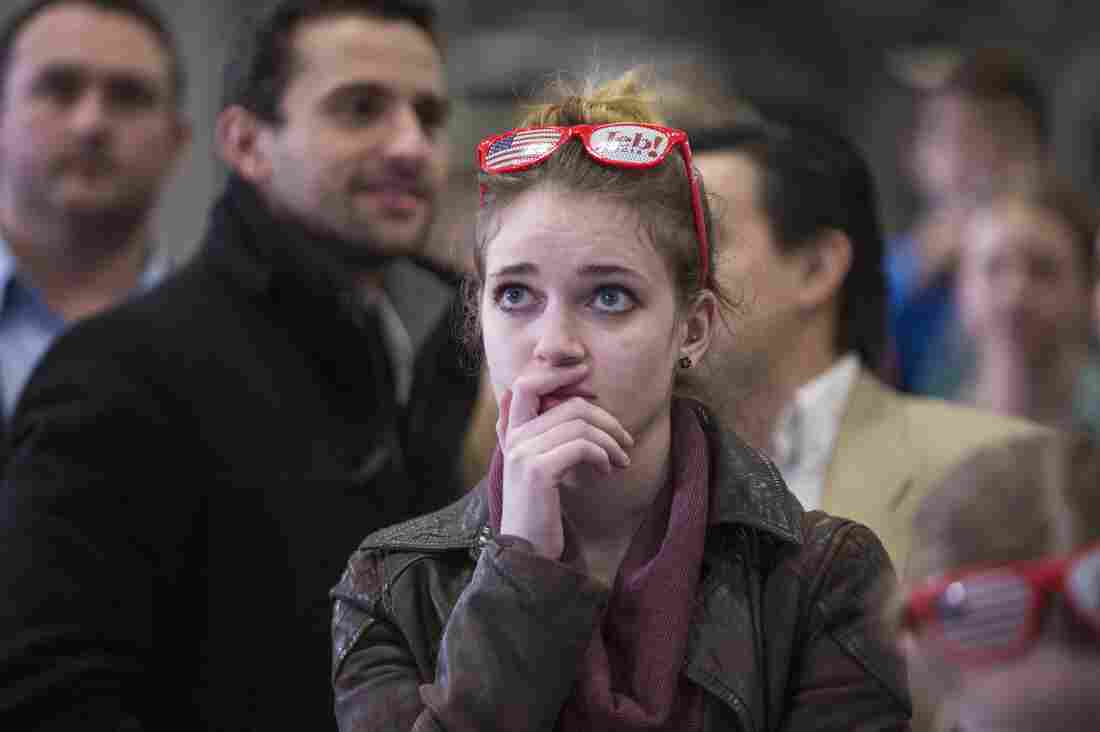 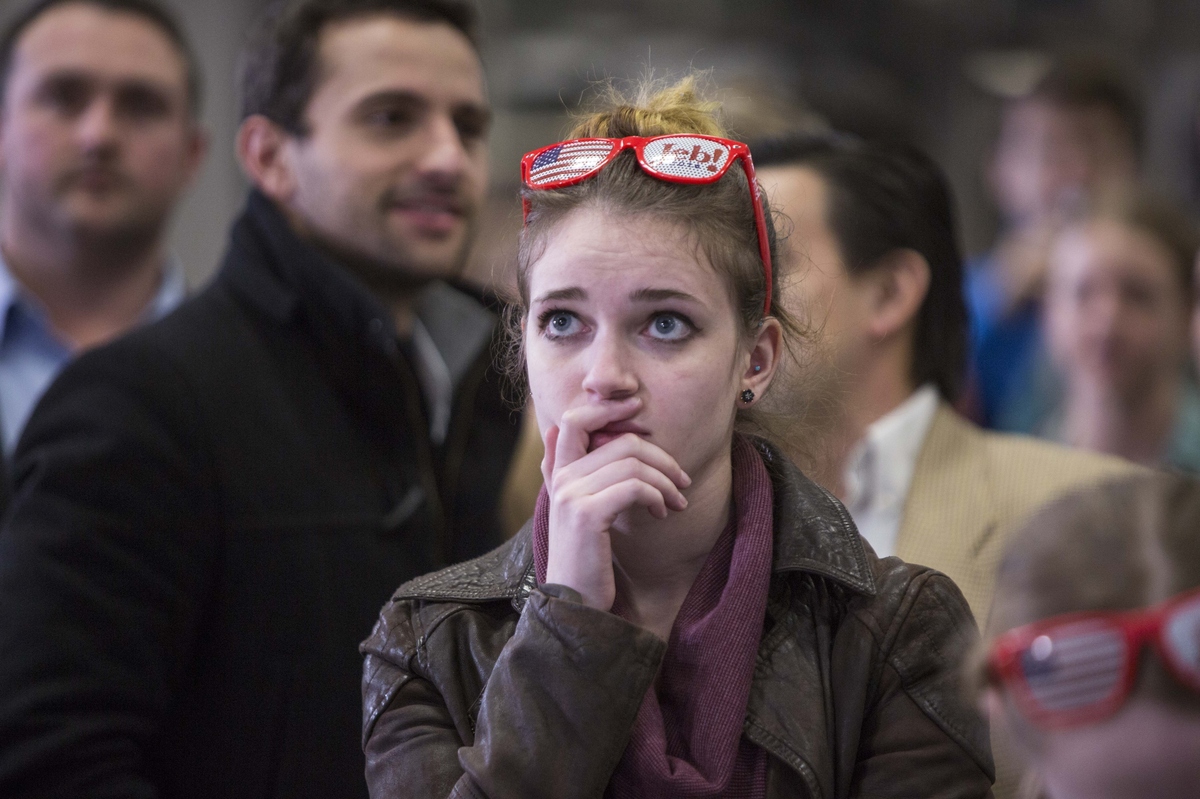 As the presidential race shifted to Nevada with Democratic caucuses last week and Republican caucuses Tuesday night, more young voters had a chance to chime in to the political process. Nevada is a state with a huge young, diverse population.

But there is the perennial question: Do young people matter in politics?

Millennials (born between 1982 and 2000, according to the Census definition) are the largest generation in the country. With an estimated population of 83.1 million, they now outnumber baby boomers. But, in the last election, they had the lowest voter turnout of any age group.

That's partly because political campaigns aren't tapping into the potential power of young voters, according to Kei Kawashima-Ginsberg, the director of CIRCLE, the Center for Information and Research on Civic Learning and Engagement, at Tufts University.

Kawashima-Ginsberg and her colleagues are eager to increase youth participation — CIRCLE was founded in 2001 as a result of declining youth turnout in the 1990s. This election cycle, they've methodically studied every state to create an empirical index that analyzes where the youth vote could potentially sway the outcome of the presidential election. (See the bottom of this post for more on the methodology.)

They gave states bonus points for implementing election laws that are designed to facilitate voter turnout, such as same-day registration, online registration and preregistration, which allows voters who will be 18 by election day to sign up to vote before they turn 18.

Once the index was computed, CIRCLE then looked at the size of the youth vote relative to the margin of victory in 2012.

The main conclusion for Kawashima-Ginsberg was that young people, when they're actually targeted, can help win elections — especially in these 10 states, ordered from least important to most important in terms of youth vote.

In Nevada, the margin of victory in the general election is expected to be small, compared to the size of the youth population.

Still, Nevada has struggled with low youth turnout in recent elections, so turning potential into reality is an uphill climb.

Nevada is both racially and educationally diverse. In fact, Census data suggest Nevada will be the next state to flip majority-minority in the country; currently, about 31 percent of the under-30 population is Latino.

Nevada also has a large non-college-educated population, which suggests the youth vote is far more multifaceted than in other states.

"Nevada's young voters ... are more and more likely to register as unaffiliated or independent," said Kawashima-Ginsberg. That may mean fewer young Nevadans will participate in the caucuses, but it also means they're more likely up for grabs in the general election.

North Carolina was famously known for its high youth voter turnout in 2008, which swung the state in Barack Obama's favor.

Since then, the state has rolled back a couple of election procedures that are designed to ease the voting process — both same-day registration and preregistration.

Still, the CIRCLE index ranks North Carolina high because the young population has shown it votes differently than the older population. In 2008, for example, exit polls show 76 percent of 18- to 29-year-olds voted for Obama. Every other age group preferred John McCain.

The other defining characteristic is race — 23 percent of the youth population is black. In recent elections, young African-Americans have had the highest voter turnout.

Of course, the high turnout in the African-American community was likely linked to the historic election of the country's first black president, and without Barack Obama at the top of the ticket it's unclear whether black voters will participate at equally enthusiastic rates this year.

"It may be counterintuitive to have Florida in the top 10, because as a whole the population in Florida is rather old," said Kawashima-Ginsberg. The state's average age is 41.8.

But she said the Sunshine State scored high on the "election law" index — with preregistration for 16- and 17-year-olds and now online registration.

"Preregistration has been found to have a long-term impact on young people's voter turnout, even after they turn 18 or 30," said Kawashima-Ginsberg.

The other unique factor in Florida is that the state is home to more than 400 higher education institutions; university campuses are critical for voter mobilization, since people who are college-educated tend to vote at higher rates.

Virginia has a sizable youth voting population — 1.2 million, which is 21.3 percent of the state's population.

Kawashima-Ginsberg says Virginia's relatively high, consistent turnout may be a result of the state's competitiveness in a general election contest.

"People who are young are actually hearing from campaigns over the phones, or they may even get door-knocking at their homes, which is not the case in other non-battleground states," she explained.

During presidential election years, a large percentage of young people in Wisconsin tend to vote. In fact, according to average Census figures from the last three elections, turnout hovered around 60 percent.

Kawashima-Ginsberg says that strong participation is partly because young folks in Wisconsin have characteristics that correlate to high turnout — they're overwhelmingly white, employed and living above the poverty rate.

But, she cautions, Wisconsin's population is aging, and it's being replaced by a more racially diverse population. It's unclear whether these new minority voters will participate at the same rates.

Colorado's youth demographic is also the fastest-growing age group in the state. It also appears that youth voter turnout has been rising, as opposed to declining — the opposite of the national trend.

Ohio has a large number of colleges — 385 institutions of higher education, according to CIRCLE research.

But Kawashima-Ginsberg says Ohio's under-30 population is unique — many have children (26 percent). In fact, of all these 10 states, Ohio has the highest ratio of young people with kids.

As a result, Kawashima-Ginsberg says, the issues that matter to young voters in Ohio may be more diverse — encompassing not only college affordability and jobs, but also health care and early childhood education.

"That might mean there are different places where young people who could vote could be reached out to," said Kawashima-Ginsberg.

She says that's particularly important in Ohio because the election is likely to be tight.

"It's one of the top states when it comes to how small the margin of victory was relative to the youth vote," she said.

CIRCLE's analysis shows that in 2012, the youth vote was about 5.6 times as large as the margin of victory.

There are a few disparate factors that make Pennsylvania's youth vote unique.

This presidential election cycle, Pennsylvania is introducing online registration, which may make it easier for first-time voters to sign up

Like Florida, the state has more than 400 institutions of higher education.

And, in recent cycles, young voters in Pennsylvania have tilted far more to the left than older folks.

The state also has a sizable black youth population (15 percent) and, in recent elections, young black people have voted at a higher rate than any other race. But, similar to North Carolina, where young black voters were key in 2008, it's unclear if black turnout in Pennsylvania will match previous levels this year.

Young voters have a disproportionately high impact in New Hampshire, and Kawashima-Ginsberg says that's because they've had a high turnout in recent elections.

She attributes the strong turnout to two main factors:

"[New Hampshire] has a specific style of candidate outreach, which gets [candidates] into the community, in people's homes ... so these young people are very likely to have direct contact with presidential candidates," said Kawashima-Ginsberg. "Those things can really enhance the sense of efficacy that young people's votes matter."

The reason the two are so similar is likely because they both benefit from enthusiasm generated during the primary season. Since Iowa is home to the first nominating contest in the country, it's almost inevitable that young people either meet candidates in person or hear about them through TV advertisements.

"Throughout the state, there's just a lot of resources going to outreach," said Kawashima-Ginsberg, and, like in New Hampshire, the side-effects of that outreach linger into the November general election. On average, Census data show that about 60 percent of 18- to 29-year-olds voted in the past three presidential elections in both states. Nationally, about 45 percent of young people voted in the past three elections, and about 35 percent for the two elections before that.

Methodology: CIRCLE used a variety of metrics, including, but not limited to: the percentage of the population under 30, the percentage of 18- to 29-year-olds currently enrolled in college, youth turnout in past presidential elections and the predicted competitiveness of the 2016 race. The index also accounted for the economic health of a state's youth population, since education and wealth tend to predict voter participation.