Accessibility links
Review: Loretta Lynn, 'Full Circle' What commands the spotlight on Full Circle isn't so much what the archetypal, proudly Appalachian-identified country songwriter has to say as how she says it. 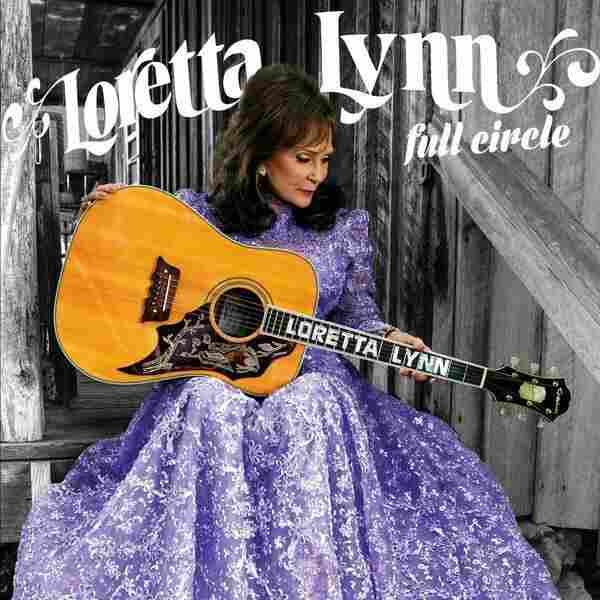 At this point in Loretta Lynn's career, each new album is more than an album — it's also a tweaking of her legacy. She's been recording for more than half a century now, along the way collecting virtually every conceivable honor for contemporary and lifetime achievements, from CMA Entertainer of the Year trophies to the Presidential Medal of Freedom and induction into the Country Music Hall of Fame. On 2004's Van Lear Rose, Jack White gave Lynn's music a canny, bracing garage-rock treatment, framing her down-home authenticity in a way that any indie-rock fan could appreciate. The multi-artist Coal Miner's Daughter tribute album, which appeared half a dozen years later, underscored the genre- and generation-spanning breadth of her appeal. It's just about the only imaginable musical context in which a lineup that includes Reba McEntire and The White Stripes, Gretchen Wilson and Paramore could make sense.

Among the producers who worked on the latter project were Lynn's daughter Patsy Lynn Russell, who had a country-singing sister duo in the late '90s, and John Carter Cash. He was babysat backstage by Lynn in his youth, he steered the final studio recordings by his own mom June Carter Cash in the aughts, and he saw up close the profound, and circumscribing, effect that a series of stark, folk-gothic, late-in-life albums had on his dad Johnny Cash's enduring image; younger listeners have remembered the Man in Black mostly for his darker side ever since. Russell and the younger Cash produced Full Circle, too. They know Lynn's body of work as well as anyone, the aspects of it that get the bulk of the attention — like the feisty messages in her songs — and the aspects that have been overlooked or forgotten.

What commands the spotlight on Full Circle isn't so much what the archetypal, proudly Appalachian-identified country songwriter has to say as how she says it. These 14 tracks retrace Lynn's remarkable mountains-to-mansion musical development. Taken chronologically, rather than the order in which they were sequenced, the story starts with brisk string-band updates of the traditional storytelling ballads "Black Jack David" and "I Never Will Marry," which soundtracked her hardscrabble Butcher Holler childhood long before Lynn gave serious thought to making music. Then there's the sweet, pining waltz "Whispering Sea," apparently the first song she wrote once she began putting herself out there as a performer. It's introduced by a charming, one-minute spoken exchange that serves as a reminder of how little she and her husband Oliver "Doolittle" Lynn knew about the business they were trying to break her into. With a little prompting, she regales her audience of studio collaborators with her recollections: "I had to get all these songs wrote in two days. ... I said, 'How many goes on an album?' I didn't even know. And they said, '12.' And I said, 'Well, I'll write 'em.'"

Also on the album are new versions of a few songs Loretta Lynn recorded after learning, and expertly bending, the rules of a modernizing 1960s country-music industry in Nashville. Her honky-tonk classic "Fist City" is by far the most familiar in the bunch, and the one that best showcases the spunky anticipation and directness of her phrasing. (It has a more rueful counterpart in the recently composed, Elvis Costello-aided "Everything It Takes.") But the smooth, sentimental pop number "Secret Love," another tune she'd cut back in the day, serves as a reminder that Lynn could, and still does, have the ability to shift gears in her singing, to soften her enunciation and luxuriate in her vibrato when the material and the finessed countrypolitan production call for it. She makes fine use of those expressive chops in the country-pop chestnut "Always On My Mind," as well, before returning to the harder, countrier vocal attack she employs in the pleading country ballad "Wine Into Water" (a new one borrowed from the catalog of countrified soul-pop singer T. Graham Brown) and the country-gospel romp "Everybody Wants To Go To Heaven" (an oldie from her '60s repertoire).

Several years ago, Lynn explained to an interviewer how one mode of singing differed from another in her mind: "Pop music is the easiest music there is to sing. I don't know why, but it's nothing for me to sing; the only thing I have to watch is how to say my words. A little ol' country song is the hardest thing there is to sing." It's not at all surprising that Lynn would pledge her allegiance to "little ol' country songs"; staying earthy and rooted has been central to her identity and made her beloved to her fans. But an album like this, handled with care by its producers, has the potential to remind people that there's art and craft, professionalism and depth to Lynn's sturdy simplicity, to help us better appreciate her as an artist who's both of her time and beyond it. Four songs in, the 83-year-old legend sings, "Who's gonna miss me when I'm gone?" The answer is, of course, everybody.