Accessibility links
Here Are 5 Texas-Sized Things To Watch When Republicans Debate Tonight Trump's successes endanger both Cruz and Rubio. Will this be the debate where they stop fighting each other and take on Trump? 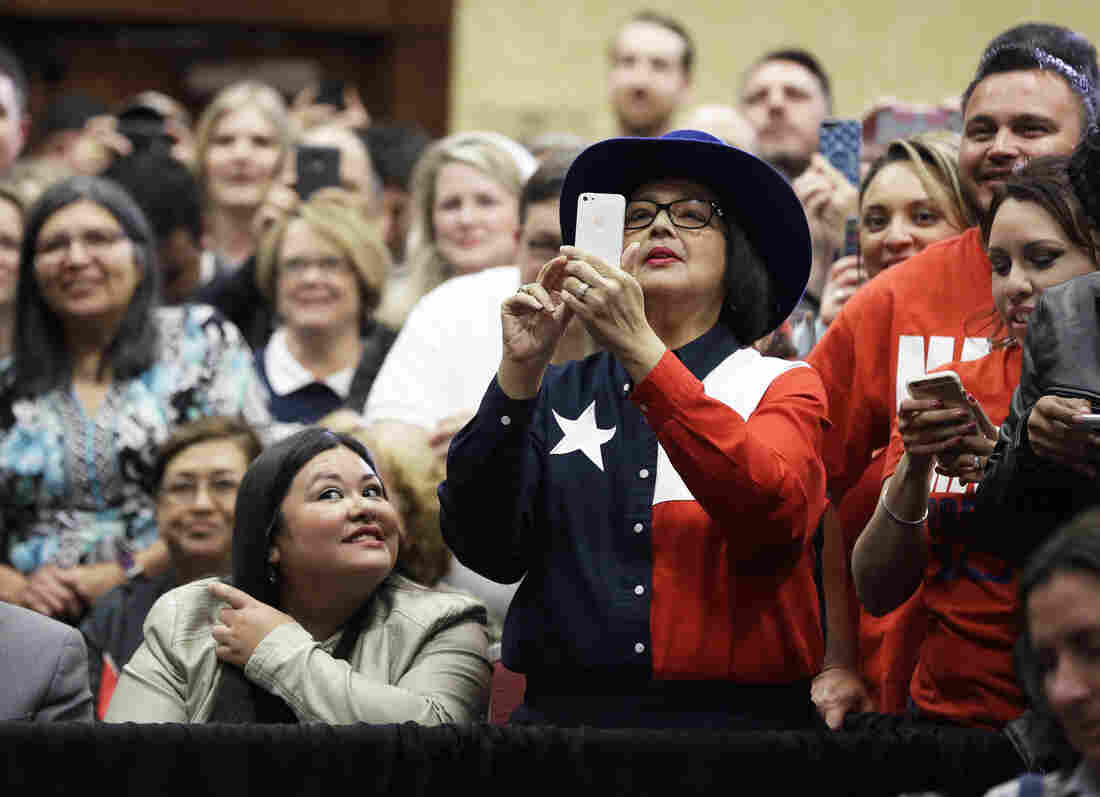 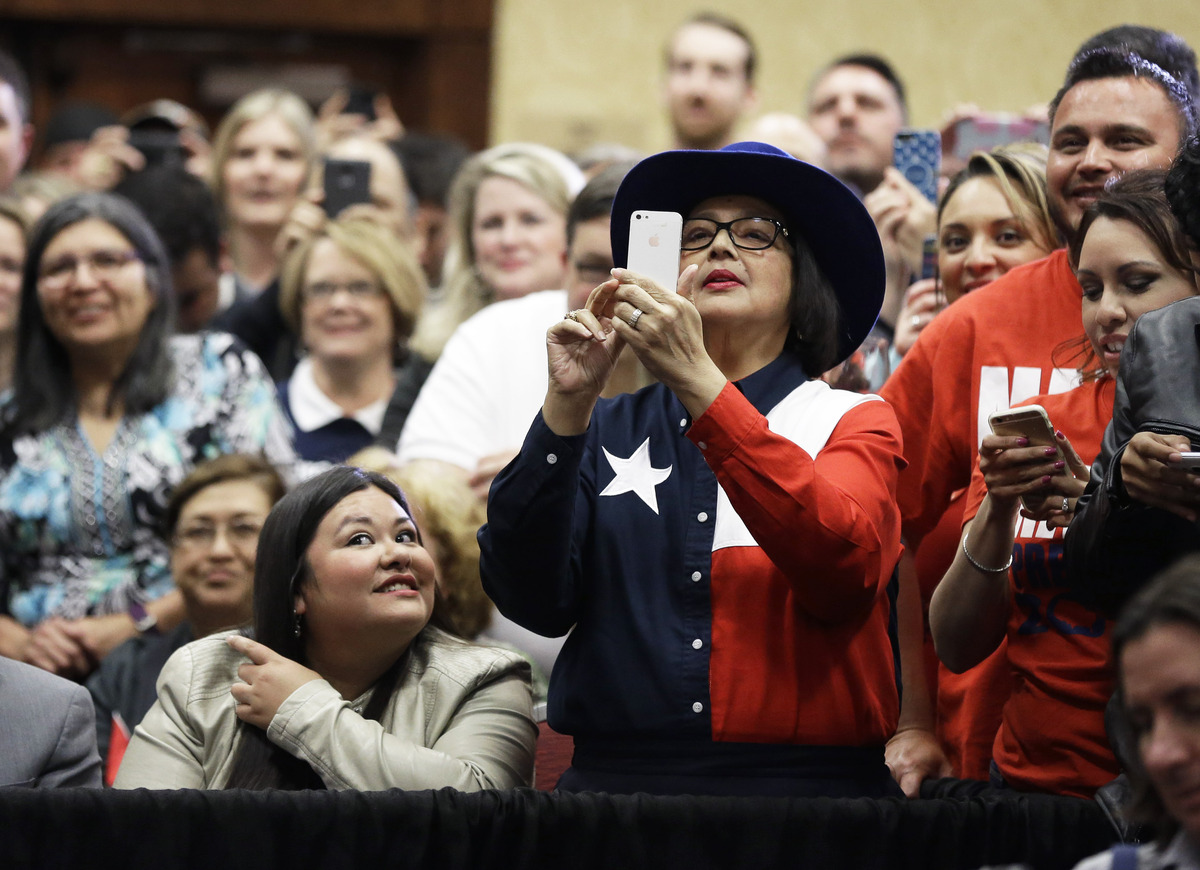 A supporter takes a photo of Republican presidential candidate, Sen. Marco Rubio, on Wednesday in Houston.

The five remaining candidates for the Republican presidential nomination meet tonight in Houston, Texas, the biggest city in the biggest state holding a primary on March 1, which is Super Tuesday, which is the biggest voting day so far in 2016 – and the biggest all year besides election day in November.

Whoever prevails tonight gets a long leg up toward being the biggest vote-getter on Tuesday. And whoever sits on top after Tuesday is going to be increasingly hard to deny.

So there is more on the line now than in any of the previous Republican debates stretching back to August. There will be a lot for viewers to watch for. Here are five suggestions for a prime-time checklist.

1. Which Ted Cruz will show up in his home state?

Texas Sen. Ted Cruz has modeled several personae in recent weeks. He has mostly stuck with his practiced role as the hardest of hardline conservatives, doctrinaire on every issue from social policy to economics to national security. But of late he has also mixed in a softer side at times. He was widely reported to have been courtly and gracious to Senate colleagues and fellow former Supreme Court clerks at the funeral for Justice Antonin Scalia, for example. He has also striven to repair his relationship with rivals such as Dr. Ben Carson. Will this be the face the first-term Tea Party senator shows to defend his home turf? Or will he be the embattled and all-but-martyred conservative champion, pushed to the brink of elimination by Donald Trump and the mindless way the news media have celebrated him?

2. Assuming Cruz comes out swinging, which rival will suffer the weight of his blows?

It won't be Ohio Gov. John Kasich or Carson. Thus far it has most often been Sen. Marco Rubio, Cruz's counterpart Tea Party hero from Florida. Both their fathers fled Cuba. Both candidates have been in a cage match since the voters began weighing in: Cruz and Rubio finishing, respectively, first and third in Iowa, then third and fifth in New Hampshire, then third and second in both South Carolina and Nevada (with the margins too narrow to mention). But can Cruz afford to concentrate on his closest competitor? What about the guy on top? Trump is creeping up in the polls in Texas, and Cruz contemplates the ignominy of losing March 1 not only in the South but in his home state. With this becoming a four-alarm fire for the Cruz campaign, the war on Rubio may need to go on the backburner. If Cruz is to go mano a mano with anyone tonight, it may have to be the mano of the man who is running away with the nomination.

3. Which way does Rubio train his fire?

Can he afford to prolong the fratricidal struggle with Cruz while Trump saunters past them both to the nomination? Surely the Rubio camp can see Trump has the momentum and the polls and the wind at his back. So can they leave him alone on this CNN stage in Houston? If Trump threatens Cruz in Texas, he imperils Rubio in Florida two weeks later. But wait, does it make sense to attack the man who might still pick you for vice president? Rubio has always been the most logical pick to be the running mate for whichever Republican (other than Cruz) winds up with the nomination.

4. Given all this stress for Rubio and Cruz, what should The Donald do?

Need he even plan it out? Or will he be able to pivot in whichever direction he needs to, batting away salvos as they come? Trump knows his next test is Texas, but it is also in his interest to keep both Cruz and Rubio in the running because that will ensure his opposition remains divided. Watch for the way Trump handles immigration in the state that has long been ground zero for the issue. Will he double down on his "build the wall" boasts and threats toward Mexico? Will he once again impugn the eligibility of Cruz and/or Rubio to be elected under the "natural born Citizen" requirement of the Constitution?

5. What might the peripheral candidates do to make their presence matter?

Kasich remains a factor in the calculations at least until votes are cast in Michigan (March 8) and Ohio (March 15). As the sitting governor of Ohio, he hopes to claim that highly symbolic state; but he has the same problem there as Cruz and Rubio have in their home venues. Like Rubio, Kasich would like to keep a robust claim on the running-mate option, so he is unlikely to unload on either Trump or Rubio. And he may also be loath to unload on Cruz while in Texas. But stay tuned. Kasich is still capable of surprises. Carson? Well, at this stage, maybe not so much.