Accessibility links
#MemeOfTheWeek: Ted Cruz And The Zodiac Killer If you start typing "Is Ted Cruz..." into Google, you'll get a very strange auto-complete involving the Zodiac killer. 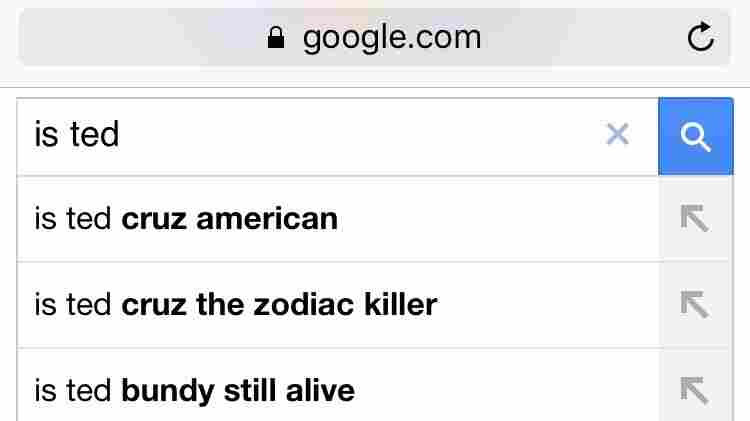 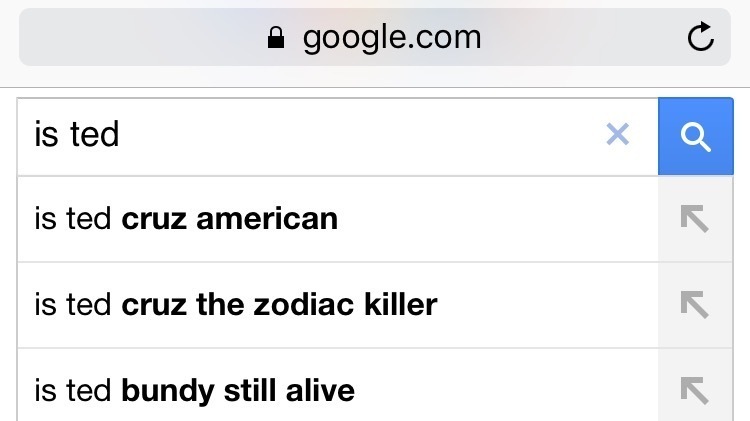 If you start typing "Is Ted Cruz..." into Google, before you can even get to the C, Google attempts to auto-complete the sentence. And usually, at least these days, one of the first auto-complete options is a very strange question: "Is Ted Cruz the Zodiac killer?"

The FBI describes the Zodiac murders like this: "seemingly random brutal murders of five people in California's Bay Area in 1968 and 1969 and a series of taunting cryptic notes sent by their killer terrorized Northern California for years."

But here's the thing. Ted Cruz wasn't born until 1970. And, people floating the Ted Cruz/Zodiac Killer conspiracy theory actually point that out.

It's all really absurd. And increasingly, it's trending.

#CPAC Alert: Ted Cruz is speaking!! His speech is titled: 'This Is The Zodiac Speaking'

After that, a few enterprising Twitter comedians kept the conspiracy theory alive. Keep in mind, during this time, seemingly everyone keeping the Cruz/Zodiac joke alive on social media knew that it wasn't true, at all. And again, we should point out here, once more: Ted Cruz is not the Zodiac Killer.

The story lived in the crevices of the Internet and social media for a while, but it really peaked in the last few weeks.

There's one big reason, it seems. During a recent GOP presidential debate on CBS, comedians behind the Cruz/Zodiac meme were determined to make it trend. "I didn't really engage with it too much up until the CBS GOP debate, the most recent one," Nathan LaMagna, one person who helped make that happen, told NPR. "I noticed ... the Google Trends ticker along the bottom of the screen, kind of a way to make things more interactive. What are people Googling about the candidates? It was stuff like 'How tall is Jeb Bush?' Stuff like that. It was fluff, it was nonsense."

"It wasn't going to help anybody get informed," LaMagna, who is an Independent supporting Bernie Sanders, said. "But while I'm watching this, I'm like well if it's showing what the Google Trends are, what's to stop somebody from making that trend. So I put out kind of a call to action. I just tweeted out: 'Hey everybody should Google 'Is Ted Cruz the Zodiac killer?' and see if we can hit the ticker on there.'"

He jokingly photoshopped the question onto CBS's debate ticker, as if it actually happened:

holy shit we did it. oh my god oh my god #GOPDebate pic.twitter.com/d6WQFAC4am

Now there are t-shirts for sale, declaring that Cruz is the Zodiac killer. Proceeds from those sales have been going to a network of Texas clinics that provide abortions. (Ted Cruz opposes abortion.)

There's a Ted Cruz/Zodiac killer romance book as well, for sale on Amazon. And most recently, Public Policy Polling asked in a survey whether it's possible that Ted Cruz was the Zodiac killer.

NPR spoke with several people involved with the Cruz/Zodiac meme, and they all said pretty much the same thing. They know Cruz is not the Zodiac killer. But they say it's all about a feeling they have about Cruz: they think he's creepy. And they want to point that out, as clearly as they can.

"Once something catches on for whatever reason it just kind of builds on itself and becomes you know, kind of a short hand thing, you don't have to explain it," said comedian Patrick Monahan, who identifies as a Democrat. He felt that a general feeling that Cruz is creepy had been building for a while.

Monahan cited a column that went viral last month in which a professor of neurology attempted to explain why "Ted Cruz's Facial Expression Makes Me Uneasy."

"There was something about the fact that there was a neurologist that went on the air or did an interview that said there's a neurological reason why Ted Cruz's face seems strange," Monahan said.

It's important to point out that was one person's take in one column, and not accepted science. The column never pointed to any scientific reason and its author concluded he was "at a loss to verbalize what unsettles me."

Monahan added, "and then there was a protester in one of the Iowa rallies that stood in the back and yelled 'Ted Cruz looks weird' a bunch of times. I think it just sort of crystallized for me that there's something about this guy that really kind of is off-putting to people."

Monahan said that Cruz has a likeability problem. "It seems to be something that has always been true of presidential candidates, people say 'I wanna have a beer with this guy.' ... and there's none of that with him at all. To me that's strange."

"It's weird to see somebody in politics, which is essentially a popularity contest, in a lot of ways especially on a national level, who seems very unpopular," he said.

Twitter comedian Lindsey Martin, one of the users at the center of the Cruz/Zodiac conversation, said part of the reason she feels comfortable participating the meme is that she doesn't believe it. "Yeah I think it's all a joke," said Martin, who told NPR she disagrees with Cruz's policies. "I know the killings started in 1968. And Ted Cruz was born in 1970. I think that's part of the reason that I've been comfortable keeping the joke going; because it's so obviously untrue. And if there was any way that it could possibly be true I would be scared to joke about it just because of the repercussions."

For LaMagna, who led the charge to get Cruz/Zodiac trending during the CBS GOP debate, it was all about the worlds of politics and social media colliding. "I think this is just one iteration of a phenomenon that's going to continue," he said. "You know, the more and more with the CBS Google Trends ticker, as you get the media and politicians trying to plug into this still new territory of social media, you're only going to see more and more times when that kind of old-school thinking clashes with all sorts of new media. And all the different absurdists and satirists out there. ... this is their domain that you've plugged into. And with it comes some sort of unintended consequences."

NPR reached out to the Cruz campaign, not to ask if he's the Zodiac killer, but for a response to the lingering meme. We have not heard back yet. But we should point out again, just once more: Ted Cruz is not the Zodiac killer. Really. He's not.