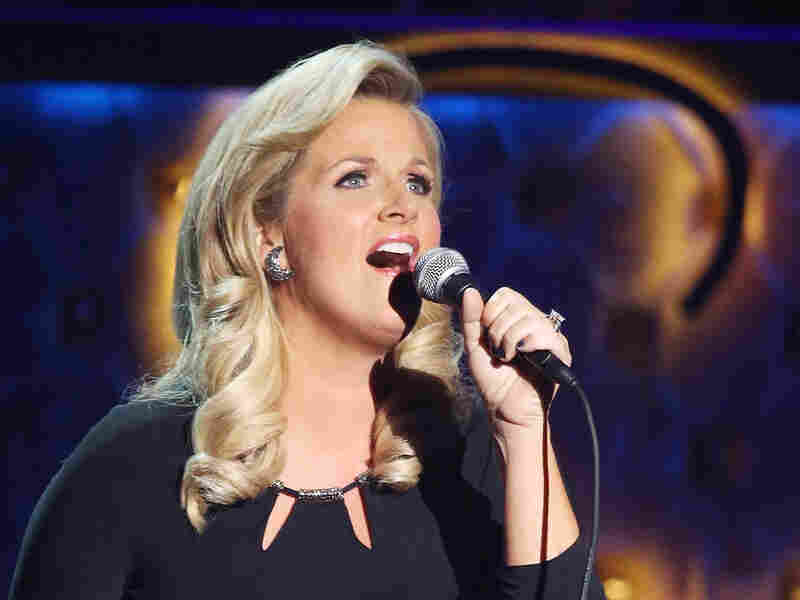 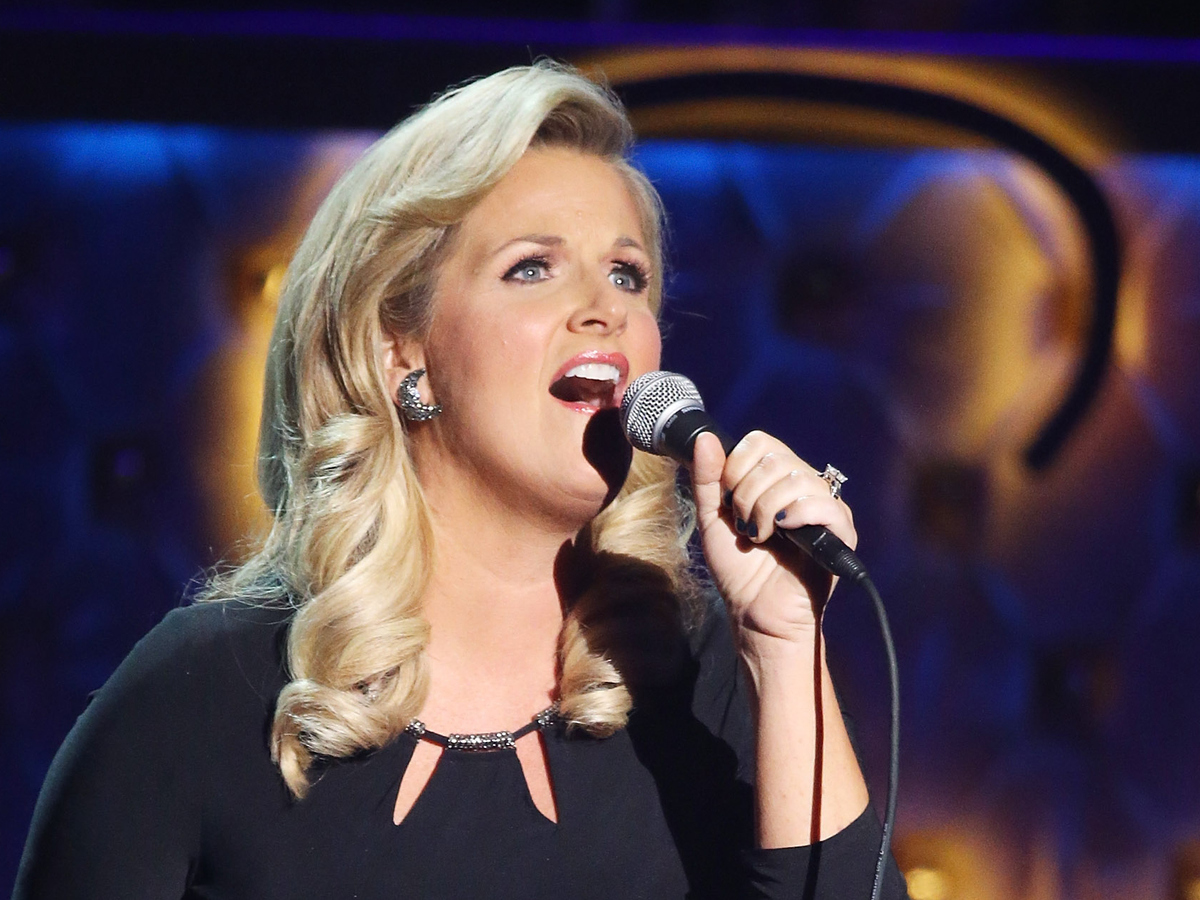 As a 5-year-old growing up in Monticello, Ga., Trisha Yearwood wrote Elvis Presley a letter, asking him to marry her. Elvis never responded. So instead, Yearwood became a record-setting country music superstar, a best-selling cookbook author and lifestyle guru, and ultimately, settled for marrying Garth Brooks. So, not the worst Plan B.

And now the game where we ask strange questions to delightful people. It's called Not My Job. When she was about 5 years old coming up in Monticello, Ga., about an hour from here, Trisha Yearwood wrote Elvis Presley a letter proposing marriage. He never responded. She responded to this heartbreak by becoming a record-setting country music superstar, a best-selling cookbook author and lifestyle guru and ultimately settling for marrying Garth Brooks...

Not a bad second-best. Trisha Yearwood, welcome to WAIT WAIT... DON'T TELL ME.

TRISHA YEARWOOD: Thank you very much. Thank you.

SAGAL: So was that story true, or was it too good to be true? Did you really write Elvis a letter?

YEARWOOD: It's all true.

SAGAL: And what did the letter say?

YEARWOOD: I - you know, I was a little girl and I was watching Elvis movies. And I didn't realize - I'm watching these movies in the early '70s - I didn't really know we were already into, like, the jumpsuit phase.

YEARWOOD: And I thought - I was watching, you know, "Viva Las Vegas" thinking I want to be Ann-Margret. So I'm a big fan. I've been to Graceland many times. And they have saved every fan letter that anyone ever wrote to Elvis.

YEARWOOD: So they've been going through the archives looking for this letter. And now I realize that my mother never mailed it.

FAITH SALIE: You could've had a chance, Trisha.

YEARWOOD: I do really think that she ruined my entire life by - yeah.

SAGAL: So you've got a furniture line. You've got cookbooks, best-selling cookbooks. You've got a line of cookware, a food network show. Of course, you've got your best-selling music. Have you ever sat in one your chairs, cooking one of your recipes made in your own cookware while listening to your own music and said to yourself I am killing this?

SAGAL: 'Cause I would totally do that.

YEARWOOD: Every morning. It's funny, the whole cooking thing came out of just a random thought of writing a cookbook with my mom and my sister for fun...

YEARWOOD: ...Having no thought that it would do what it did. So I'm the most surprised person that it has led to this other career.

SAGAL: I asked Martha Stewart this question once, and you're getting into that arena. Do you feel obligated, as Martha Stewart sort of does, to do everything perfectly because you have a lot of people - television, online, readers of your book - who now emulate not just...

SAGAL: ...Your life but your lifestyle?

YEARWOOD: ...No, no. I'm the inspiration for picking it up off the floor after it fell off the stool and figuring out a way to make it still work.

SAGAL: This explains the title to your...

SAGAL: The title to your second best-selling cookbook "Down Here We Call It The 10-Second Rule."

YEARWOOD: There you go.

SALIE: There's a recipe I think in one of your books called Garth's breakfast bowl.

SAGAL: ...As he calls you - I'm going to ask you about that in a second - tell us about Garth's breakfast bowl, is it?

YEARWOOD: Yes, it is a compilation of everything you could possibly eat for breakfast, including - so he layers the bottom with, like, some sort of potato - his preference is a tater tot - and eggs and cheese and sausage and bacon. But he also then puts tortellini in it, which - he puts tortellini in everything. I don't understand this. It's his solution to everything.

SAGAL: And how long after you married him did you find out about this quirk?

YEARWOOD: He didn't tell me for a while.

YEARWOOD: You know, really - actually, it's funny because it's a sore spot with me because I have all these recipes that, you know, you have to measure things out and put them in. And then you bake it and it becomes this thing. And it's not a recipe. This whole - and everybody's like oh, we just love Garth's breakfast bowl. It's the best thing ever. And I'm like it's - it's like taking out whatever you have in your fridge and putting it in a bowl and eating it. That's what he does.

YEARWOOD: And it's like it's so amazing. So, yeah.

SAGAL: Well, on the cookbook, is it true that you came out with a third cookbook because people were like, you know, if you eat everything in the first two cookbooks, you're going to die? Because the third cookbook - I was looking through it - it seems to have more healthy things. Even the word quinoa appeared.

YEARWOOD: It is. It's for balance, if you want to do that. But the truth is that we all know how we're supposed to eat. And so if you have fried chicken and mashed potatoes and white gravy, then the next day you have, like a grape and you're totally evened out and you're good.

PAULA POUNDSTONE: So you have a recipe that's just a grape?

POUNDSTONE: So it was probably easier to write the third book, I'm assuming.

YEARWOOD: It was a little easier.

SAGAL: Now, I mentioned this earlier, I'll say it again, in interviews and in the forward to your book, he refers to you - his own wife of how many years now?

SAGAL: Ten years - his own wife of 10 years as Ms. Yearwood.

SAGAL: That strikes me as both really gentlemanly and weird.

SAGAL: At what point will you allow him to start using your first name?

YEARWOOD: I call him Mr. Yearwood, so I don't think it's weird at all.

POUNDSTONE: So I kind of - I kind of picture you in a Terry-cloth robe staggering into the kitchen, taking out a bowl, filling it with everything in the refrigerator. (Imitating Southern accent) Here's your breakfast bowl, Mr. Yearwood.

YEARWOOD: Actually, he makes me get up first. And I get up and I turn the fog machine on, and then he comes up through the floor.

SAGAL: He does like to make his entrances, I know.

YEARWOOD: Trisha Yearwood, what a great time talking to you. But we have asked you here to play a game we're calling...

BILL KURTIS: How Do I Live With You?

SAGAL: So you have this big hit song "How Do I Live Without You?" So we thought we'd ask you three questions about people who just could not live with each other. Answer two of these questions correctly, you'll win our prize for one of our listeners - Carl Kasell's voice on their voicemail. Bill, who is Trisha Yearwood playing for?

SAGAL: Hometown girl. All right, here's your first question, Trisha. Back in the 15th century, unhappy married couples in Germany settled their disputes in an interesting way. How? A, standing in a field for night and day until one member of the couple was struck by lightning, demonstrating God's judgment, B, marital duals - to keep things fair, the husband had to fight while standing in a hole, or C, throwing chickens at each other until one gave in.

BLOUNT: The one chicken gave in, or...

SAGAL: No, one of the couples.

YEARWOOD: I don't feel like they even asked the chickens if they wanted to be...

YEARWOOD: This is a true story.

BLOUNT: They didn't line up for that, no.

YEARWOOD: I'm going to say that they dueled with swords with a man standing in a hole.

SAGAL: That is true. You can see the illustration. That's how we know about this. The man is in a hole up to his waist and the woman is not. And she has a kind of club, and he is unarmed. So I - you might want to try this.

YEARWOOD: Yeah, that's not even fair.

POUNDSTONE: He's in a hole and he's unarmed?

POUNDSTONE: Who wrote these rules?

YEARWOOD: I know, at least give him a chicken.

SAGAL: At least give him a chicken.

SAGAL: Next question - you got that one right. Next question - in 2011, when this was checked, one-third of all divorce filings in the United States contained which of these words or phrases their phrases? Was it A, Facebook, B, hussy or C, home brewer.

SAGAL: I don't need to tell you why it would show up in divorce filings. All right, you can go for perfect here - in this and in everything else in your life. Here we go.

SAGAL: The filmmaker George Lucas - we've heard of him. He was once in a very unhappy marriage, which he says inspired what in one of his films? A, Jar Jar Binks...

SAGAL: ...B, the Ewoks who peck a storm trooper to death based on his ex-wife's lawyers or C, the guy having his still-beating-heart ripped out of his chest in the second "Indiana Jones" movie.

YEARWOOD: Wow. I think I would go with the birds pecking like the lawyers.

SAGAL: They're not birds, Trisha.

YEARWOOD: There you go.

SAGAL: And you're saying that you're going to go with B. That was the storm troopers getting sort of attacked by the little furry Ewoks...

SAGAL: ...How did Trisha Yearwood do on our quiz?

KURTIS: Well, she's still a winner. You got two out of three.

POUNDSTONE: There you go.

SAGAL: So I see that you are about to go on tour with your husband.

SAGAL: Now, have you done that before?

SAGAL: And how does that go?

SAGAL: So if you and your husband are having a bad day and you have to get in front of - I would assume really large crowds, how do you handle that?

YEARWOOD: I - when you're up there on stage together, if you're not getting along that well you just try to out sing the other one. It's kind of like well, there's - take that and take that, you know? So...

SAGAL: And everybody benefits.

SAGAL: Trisha Yearwood is the host of Food Network's Emmy-winning "Trisha's Southern Kitchen," and you can see her on tour this year with her husband, Mr. Yearwood, Garth Brooks. Trisha Yearwood, thank you so much...

YEARWOOD: Thank you very much.

YEARWOOD: (Singing) How do I live without you? I want to know.

SAGAL: It just a minute, Bill refuses to eat his Grape-Nuts. It's the Listener Limerick Challenge. Call 1-888-WAIT-WAIT to join us on the air. We'll be back in a minute with more of WAIT WAIT... DON'T TELL ME from NPR.