Accessibility links
Sick Of Political Parties, Unaffiliated Voters Are Changing Politics More voters identify as independent than Republican or Democrat. And they're changing the political system around the country. 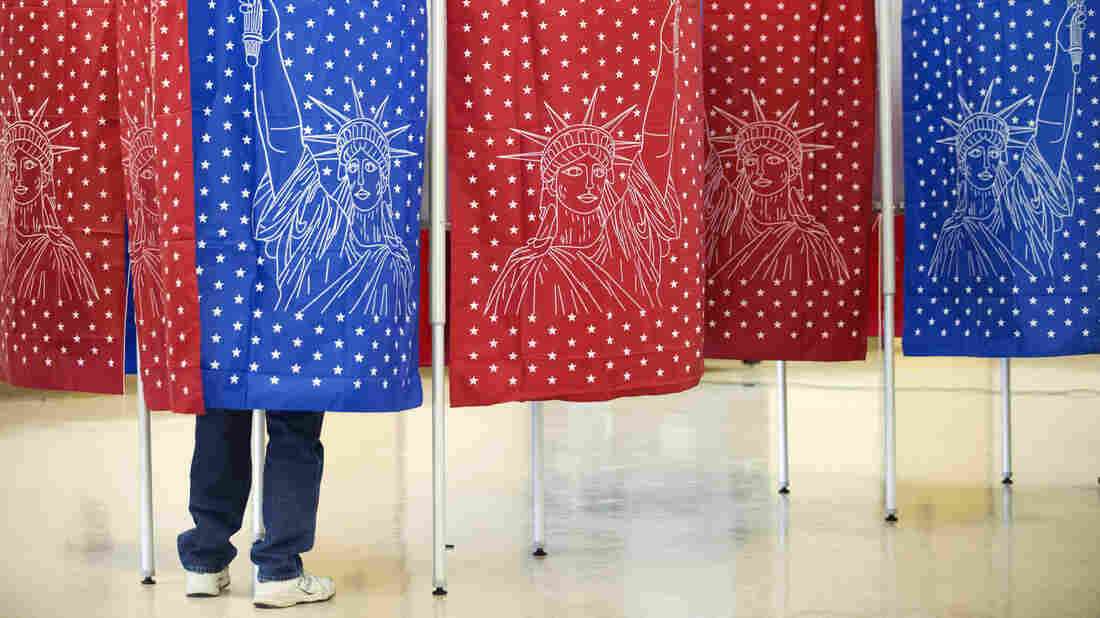 A voter marks a ballot for the New Hampshire primary Feb. 9 inside a voting booth at a polling place in Manchester, N.H. David Goldman/AP hide caption 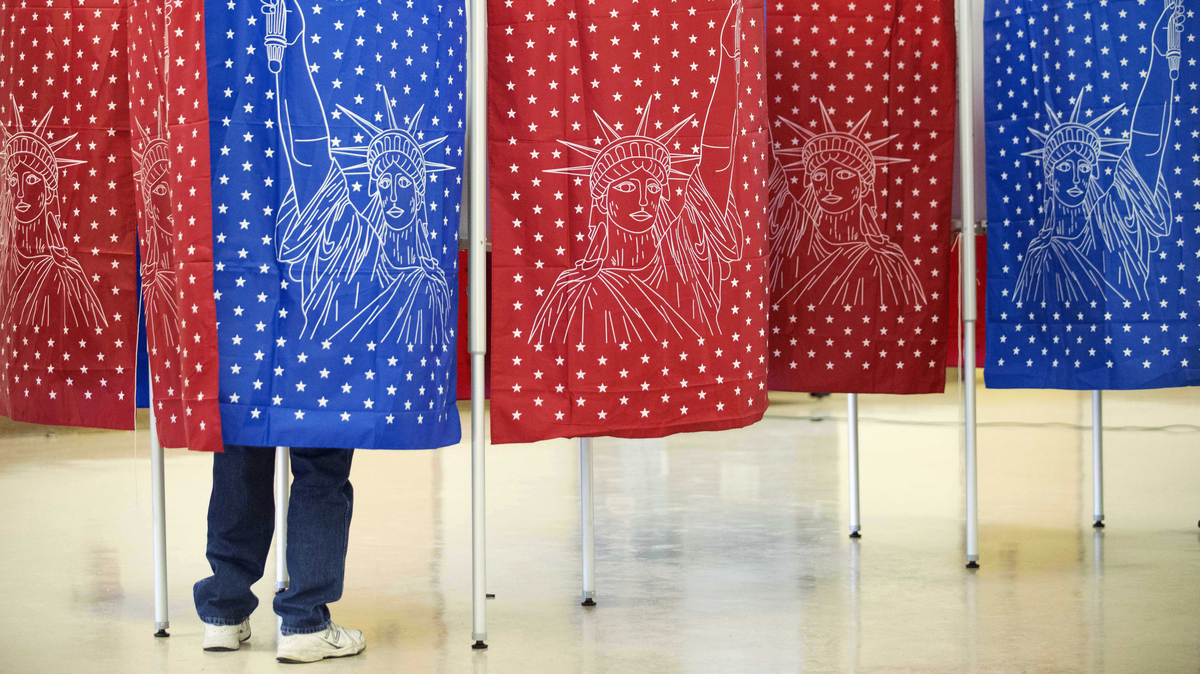 A voter marks a ballot for the New Hampshire primary Feb. 9 inside a voting booth at a polling place in Manchester, N.H.

The biggest group of voters politicians will have to woo this November are the ones who often don't get a say in which candidates make it to the general election ballot.

Turned off by the partisan wars in Washington, 39 percent of voters now identify themselves as independent rather than affiliated with one of the two major political parties, according to a 2014 analysis by the Pew Research Center. Self-identified Democrats accounted for 32 percent of the electorate, Republicans 23 percent.

That's a big shift from as recently as 2004, when the electorate was nearly evenly divided into thirds by the three groups.

But many states require voters to affiliate with a party in order to take part in presidential primaries and caucuses.

NPR checked in with several member station reporters to see what the rise of independent voters means in different parts of the country.

Colorado's more than 1 million officially unaffiliated voters now outnumber Republicans and Democrats in the state. Both parties have about 900,000 registered voters.

Many are under the age of 35, the millennial generation. Colorado has the second-fastest-growing millennial population in the country, and, by far, the most as a proportion of the population of any swing state.

To get a sense of their political power, consider the fact that more Republicans voted in the 2012 elections than Democrats. Republican Mitt Romney should have been the favorite, "but as it was, the unaffiliated probably washed out that difference and then created the winning margin for Obama," said Judd Choate, who runs the elections division for the Colorado secretary of state's office.

That winning margin was thanks in part to voters like Sara Heisdorffer. The 24-year-old lives in the Denver suburb of Westminster. Like many of her friends, neither the Democratic nor the Republican party interests her.

"People my age will hate me for saying this," said Heisdorffer. "But it's kind of that special snowflake thing that millennials get crap for all the time I think."

Neither party aligns with Heisdorffer's views, which she describes as socially liberal and fiscally moderate. Like many unaffiliated voters, however, she's not necessarily independent and generally votes for Democrats.

It's a long-running pattern to see younger voters of any generation not identify with political parties.

"Younger people tend to be less likely to affiliate with parties than older people," said Jocelyn Kiley, a researcher with the Pew Research Center. But "this is as pronounced as it's ever been."

Millennials are shunning political parties at an even greater rate than previous generations did, in part due to political dysfunction.

"People give some of the most negative ratings of either party that we've seen in the last 20 years," said Kiley.

But these trends may be changing this election. Since September, 30,535 voters have registered with the Colorado Democratic party.

That includes voters such as Curtis Haverkamp, who attended a Bernie Sanders rally a few months back. At the rally, he learned unaffiliated voters like him couldn't participate in the caucus.

"Upon hearing that, I registered Democrat," recalled the 30-year-old Haverkamp, who lives in Denver.

Both the Sanders and Hillary Clinton campaigns have been on voter registration drives here, so it's not clear yet who this spike in Democratic registration will favor. But Haverkamp says either way, the day after the caucus, he'll switch back to being unaffiliated.

In the packed parking lot of a supermarket in the central Florida city of Kissimmee, Jeamy Ramirez and her staff pace toward customers with clipboards in hand, trying to register new voters. Half the population of this growing area are Latino and native Spanish speakers.

"We got a lot of people from Colombia, Venezuela — but most are Puerto Rican right now," said Ramirez, a canvasser with Mi Familia Vota, a voting advocacy group.

In the past year, thousands of Puerto Ricans have left the struggling island for central Florida, and they're the fastest-growing group of independent voters in this crucial swing state, according to an analysis of voter registration data from the Florida secretary of state's office.

New Puerto Rican arrivals find that moving to Florida means being able to vote for president, something that's not possible on the island, and adjusting to a completely different political system.

"They don't know a lot of the candidates. They start seeing the debates and all that stuff. That's why they put no party affiliation," said Ramirez.

But many newcomers keep their focus on politics in Puerto Rico.

"They pay attention to politics on the news. It is an ever-present topic of conversation. It is a cultural event of sorts," said Carlos Vargas Ramos, a researcher at the Center for Puerto Rican Studies at the City University of New York Hunter College.

Here in the U.S., Puerto Ricans discover there are more frequent elections that are often less competitive. Ramos says other barriers to voting are language, voter registration requirements and a general feeling of distance from the political process.

But even Puerto Ricans who have been here a long time choose to stay out of the party system. Luz Maria Sanchez, who is 69, hasn't been registered with a political party for 25 years, even though the state's closed primary keeps independents from deciding who'll make it on the November ballot. But Sanchez said she's not missing out.

"They say things just to win the candidate. Republicans, they say they're going to fix the country; and Democrats, they follow almost the same, but they go the other way around," said Sanchez.

Back in the parking lot, Jeamy Ramirez hopes that even if Puerto Ricans don't vote in next month's primary, they'll turn out in November when Florida is likely to be a key swing state.

"We can decide right now the presidential election," said Ramirez.

It may sound like an oxymoron, but Arizona's unaffiliated, independent voters are organizing themselves and banding together.

Independents are now the largest voting group in the state, and that trend is only growing. For the past three years, the number of voters registering or re-registering as independent has outpaced new Republican and Democratic registrations combined.

But the last voter registration period that ended Feb. 22 was different. The number of independents in Arizona dropped slightly. That's likely because unaffiliated voters can't participate in Arizona's upcoming presidential primary, and some independents chose a party for that reason.

The rule that excludes independents from the presidential primary is just one example of what independents here find to be unfair about the state's voting system.

Now this growing group of voters wants more rights at the polls, and they are trying to change that through grass-roots pressure.

Patrick McWhortor of the group Open Primaries organized a phone "town hall" last month for independent voters that nearly 13,000 people called into to discuss these efforts.

"Independent voters, now 37 percent of all Arizona registered voters, are treated like second-class citizens," said McWhortor at the start of the meeting.

He discussed his group's efforts to get two election reform initiatives on the November ballot. One would make a single primary election with every candidate on the same ballot. The top two candidates would advance regardless of party affiliation. The initiative would also reduce current barriers for independents running for office.

Deb Gain-Braley, a 57-year-old retired accountant in Tempe, became interested in independent voting rights issues after she realized that she would not be able to vote in Arizona's March 22 presidential primary unless she re-registered again with a party. She had previously been registered as a Republican.

"I think that no one should have to choose a party to vote in America," Gain-Braley said. "So I went looking to see if there were any other organizations arguing against what's going on."

In addition to the Open Primaries group, Gain-Braley also discovered Independent Voters for Arizona, a campaign focused on opening the presidential primary to independents that she now volunteers for. The group got more than 30,000 people to sign a letter to party leaders asking them to open the primary. So far those calls have not been heeded, and the primaries will remain closed this year.

Timothy Castro, who runs Independent Voters for Arizona, argues it's not fair to exclude Arizona's 1.2 million voters from a presidential primary paid for with taxpayer dollars.

"If we are paying for something we aren't allowed to vote in, then let us vote in it, or don't make me pay for it," Castro said.

In fact, independents may have more luck getting out of paying for the primary in future years rather than actually voting in it.

A bill making its way through the Arizona Legislature would make political parties — not taxpayers — pick up the tab for presidential primaries starting in 2020. The bill is backed by the secretary of state's office.

If the bill succeeds, it will still leave independent voters to find a way into future presidential primaries here.

A previous version of this story misspelled Jocelyn Kiley's name as Joselyn Kylee.