Accessibility links
Suddenly, South Carolina Projects Clinton Power Into Super Tuesday Clinton made it clear she's ready to incorporate much of Sanders' populist, anti-Wall Street message into her own campaign. She said "more dreams die in the parking lots of banks than anywhere else." 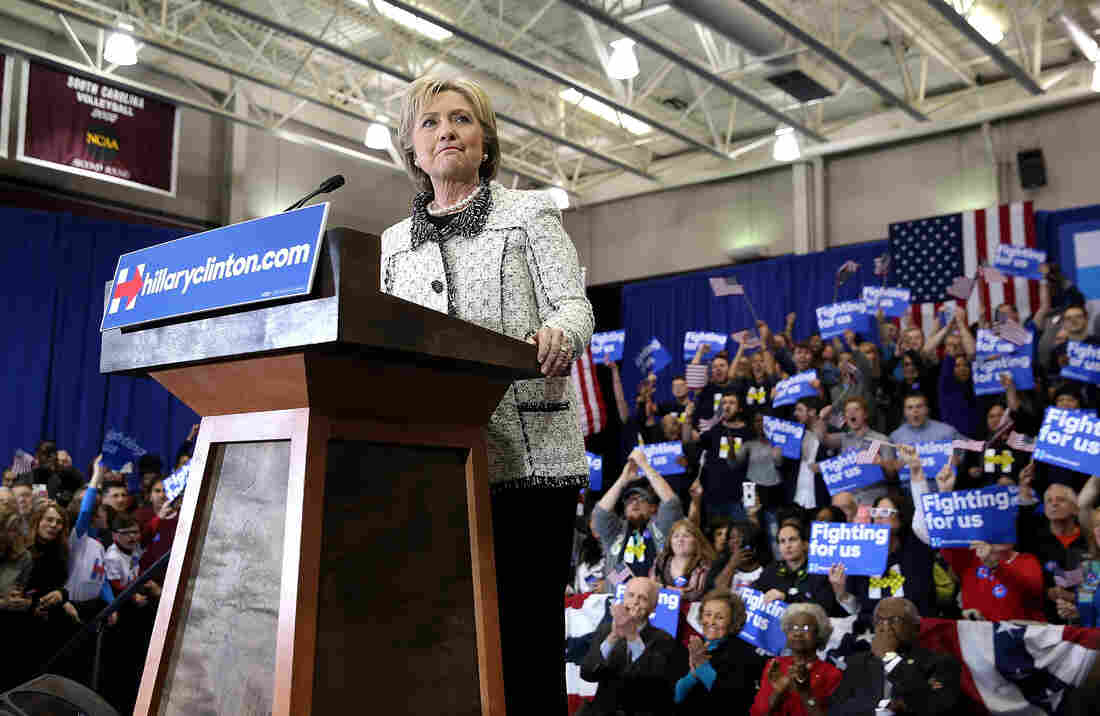 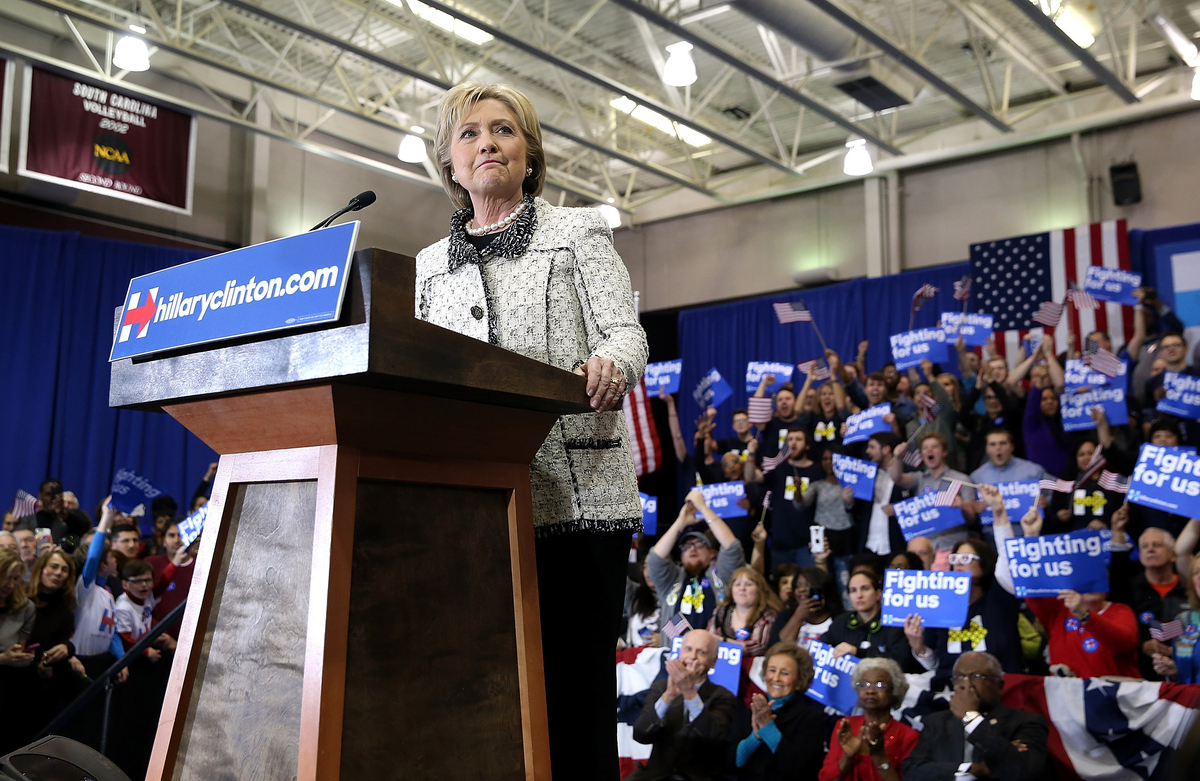 In Saturday night's primary in South Carolina, Hillary Clinton won by more than 47 percent over Democratic rival Bernie Sanders in the most populous state to vote thus far.

With every state that voted in February, the contours of the 2016 presidential election changed. Iowa, New Hampshire and Nevada all transformed the landscape in both parties.

On Saturday night, in South Carolina, the Earth moved once again. Hillary Clinton won, as expected, but the breadth and depth of her victory were breathtaking. She prevailed by more than 47 percentage points in the most populous state to vote thus far, winning by more than twice the margin of her loss to Bernie Sanders in New Hampshire on Feb. 9.

Now, with Super Tuesday's raft of states and trove of delegates just two days away, the nominating season has taken distinct shape in both parties, and it has done so far faster than seemed possible a week ago.

Clinton won by eye-popping numbers among African-Americans, who preferred her by 6-to-1 over Sanders. But she also carried the white vote, the male vote (by 2-to-1) and the vote of those who called themselves "very liberal" (a group that had been Sanders' home turf.) Sanders carried those under 30, as usual, but by less than 10 points — a far more modest margin than in previous contests.

Sanders also won among those who called themselves independents, who cast just 16 percent of the vote here according to exit polls. Clinton won by 4-to-1 among self-described Democrats.

Beyond the numbers, Clinton seized the moment to deliver what may have been the best speech of her career as a candidate. Halting at first, feeling her way with the pumped-up crowd, Clinton sometimes seemed to compete with their waves of cheers and applause. But after several minutes she found her rhythm, repeating the line she has lived on in recent days — her solidarity with the man who beat her in this primary eight years ago.

"I don't think President Obama gets the credit he deserves for digging us out of the ditch Republicans put us in," Clinton proclaimed. The crowd roared, as well it should. Exit polls said 70 percent of those voting in this primary wanted Obama's successor to continue his policies.

At turns, Clinton was exultant and grateful, ebullient and gracious. She was generous to Sanders, who had all but openly given up on South Carolina in the final days in pursuit of better ground in other states. But she also seemed to look past her intraparty rival, taking a turn toward the general election and a prospective Republican opponent.

She said after tonight her campaign was "going national," and she made pointed reference to Republican front-runner Donald Trump's campaign themes and style.

Clinton also made it clear she was ready to incorporate much of Sanders' populist, anti-Wall Street theme into her own campaign. She said "more dreams die in the parking lots of banks than anywhere else" and promised to break the power of big money in politics and the economy. Sanders has said Clinton has too often been complicit in both.

Sanders, in perhaps a symbolic moment, had issued a concession statement minutes after the polls closed from a plane flying to Minnesota and lacking a Wi-Fi connection. Landing in Minnesota, he learned the parameters of his defeat, and learned the Minneapolis Star Tribune had endorsed Clinton.

"In politics, on a given night, sometimes you win, sometimes you lose," Sanders told reporters. "Tonight, we lost. I congratulate Secretary Clinton on her very strong victory. Tuesday, over 800 delegates are at stake, and we intend to win many, many of them."

Critics may argue that South Carolina is overrated as a test of candidates' strength, especially in the Democratic Party. The outright majority of African-Americans among Democrats utterly dominates this statewide intraparty contest from start to finish. That sets the state apart, and some would say it is as unrepresentative of the country, as a whole, as Iowa or New Hampshire (where the number of black voters is negligible.)

South Carolina might also be called an outlier in its lack of younger voters and other potential targets for Sanders. It must be said as well that Democrats rarely win this state in November (Jimmy Carter was the last in 1976.)

Nonetheless, the great advantage the Palmetto State has shown over the other early-voting states to the north and west is its proven ability to influence the outcome of subsequent Southern primaries on Super Tuesday. Iowa and New Hampshire exert their influence primarily as magnets for the media in the months before the voting begins. South Carolina is better at predicting and triggering the vote of the states that follow — on the single biggest voting day of the nominating season.

Most of the states voting Tuesday are below the Mason-Dixon Line, and Clinton was already leading in them before South Carolina. In Georgia and Alabama, African-Americans make up more than half the Democratic electorate. In Texas, Tennessee, Virginia and Arkansas, black voters are a smaller but still pivotal fraction of the party. In each case, they are more numerous than in Nevada, where they propelled Clinton's caucus win on Feb. 20.

In the next few days, Sanders is expected to visit Oklahoma and Colorado, where he remains competitive on Super Tuesday, while concentrating on the more promising ground of Minnesota, Massachusetts, where he has a good chance to win, and his home state of Vermont, where he has a prohibitive lead. Sanders is also expected to make a spirited fight of the March 8 primary in Michigan.

But after several weeks in which Sanders seemed to have closed the credibility gap and become a true competitor for the nomination, back-to-back losses in Nevada and South Carolina have renewed questions about his viability. Is he in fact running for the nomination, or is he running to secure a place of honor and a featured speaking slot at the convention in Philadelphia in July? It's possible we will know much more about that in the next few days.