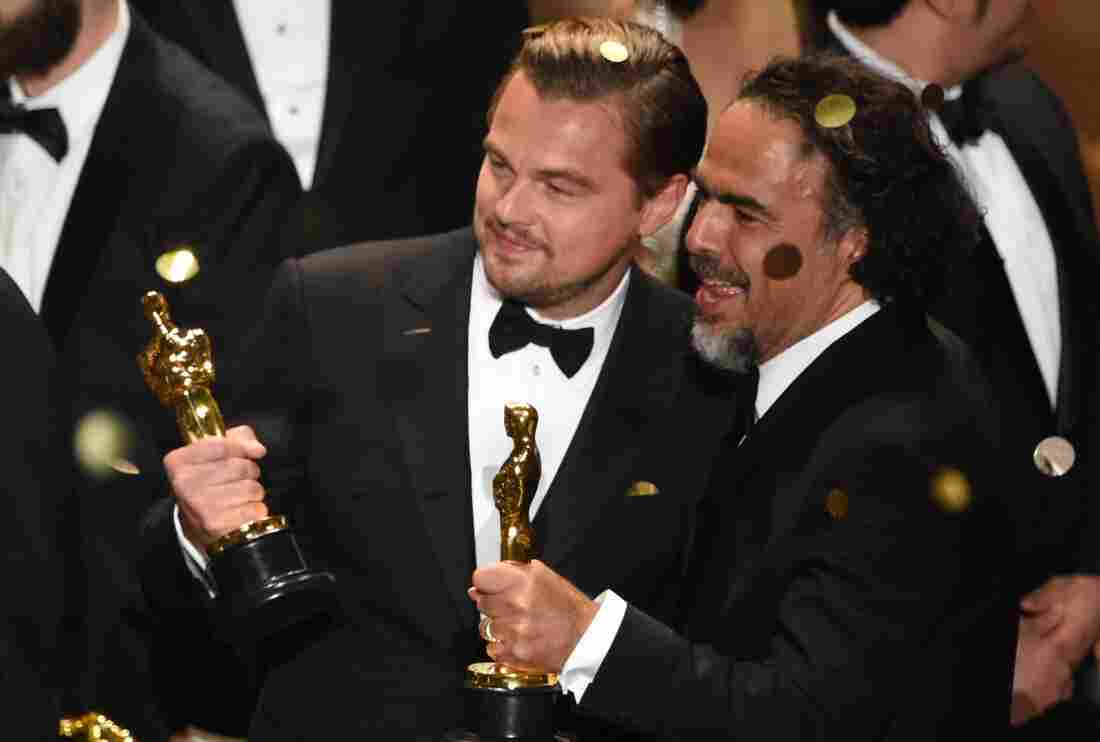 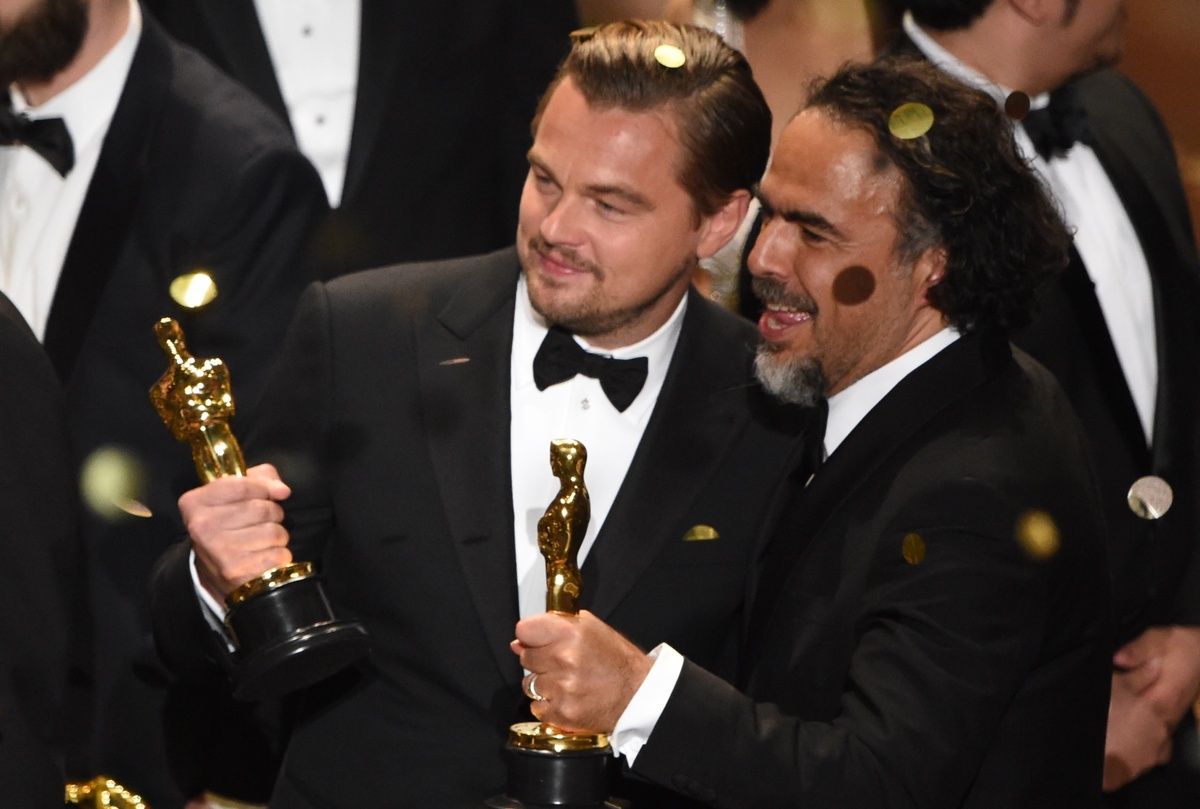 Leonardo DiCaprio and director Alejandro Gonzalez Inarritu celebrate their awards on stage at the 88th Oscars on Sunday.

You can say this for Sunday night's Oscars: It seemed like a lot of it was going to be about inclusion or lack thereof, and it was.

He added, as if it were obvious, "You can't play white, my God!" It was a rare moment of candor that woke up a typically sleepy evening.

Four years later, Rock might therefore have been the best possible person to host the Oscars, in a year when so much attention has been focused on the all-white acting nominees and the failure of Hollywood to make a very inclusive slate of films — and to recognize those films (and the people involved in them) when they're made at all.

Some of what Rock did in his monologue was squarely aimed at Hollywood, including his opening remark that if the academy nominated the hosts, he wouldn't even be there. But Rock then pivoted to a more ambivalent line of inquiry about how the Oscars have always been white, but people in the 1960s, for instance, didn't protest those because they had more important concerns. They were, he said, "too busy being raped and lynched to care who won best cinematography."

Not only is that observation in some ways ahistorical (NPR's Gene Demby just wrote about Oscar protests over the exclusion of black actors stretching back decades), and not only did it draw anger almost immediately for implying there aren't real things to protest anymore, but hearing the mostly white audience laugh and applaud at the idea that black people used to have "real things" to protest didn't feel like it was a joke at the expense of the academy or the Oscars. It felt like it was a joke at the expense of the people who were objecting to the lack of nominees who weren't white — people like Jada Pinkett Smith, whom Rock specifically mocked for saying she wouldn't show up. He said she wasn't invited anyway, much as he wasn't invited to "Rihanna's panties."

Rock did go on to draw interesting lines between the idea of Hollywood as — as he put it — not "burning-cross racist" but "sorority racist," likely to tell black people what he called the equivalent of, "We like you, Rhonda, but you're not a Kappa." But the thesis of the monologue — which, on the whole, was perhaps meant to walk a very, very fine line in terms of acknowledging the issue without alienating the room — seemed ultimately to be that Hollywood is racist, but that expending energy objecting to that fact is silly.

Shortly thereafter, Rock introduced actress and Fox News contributor Stacey Dash, who recently came under a lot of criticism for various things she's said, including statements doubting the need for Black History Month. She was on stage only long enough for him to joke that she was newly in charge of the academy's "minority outreach" and for her to wish everyone a happy Black History Month — and then she walked off the stage, grinning. By this time, the evening had turned distinctly uncomfortable, which perhaps was entirely the intent.

It's noteworthy that this all takes place in such a different environment now, where reaction happens and is communicated in real time, such that the Twitter reaction in particular almost feels like part of the event itself. There was a sense of how that monologue was going over before he even completed it; that doesn't seem like it's going to make that job any easier in the coming years. And it's already a pretty hard job, particularly in a year like this. 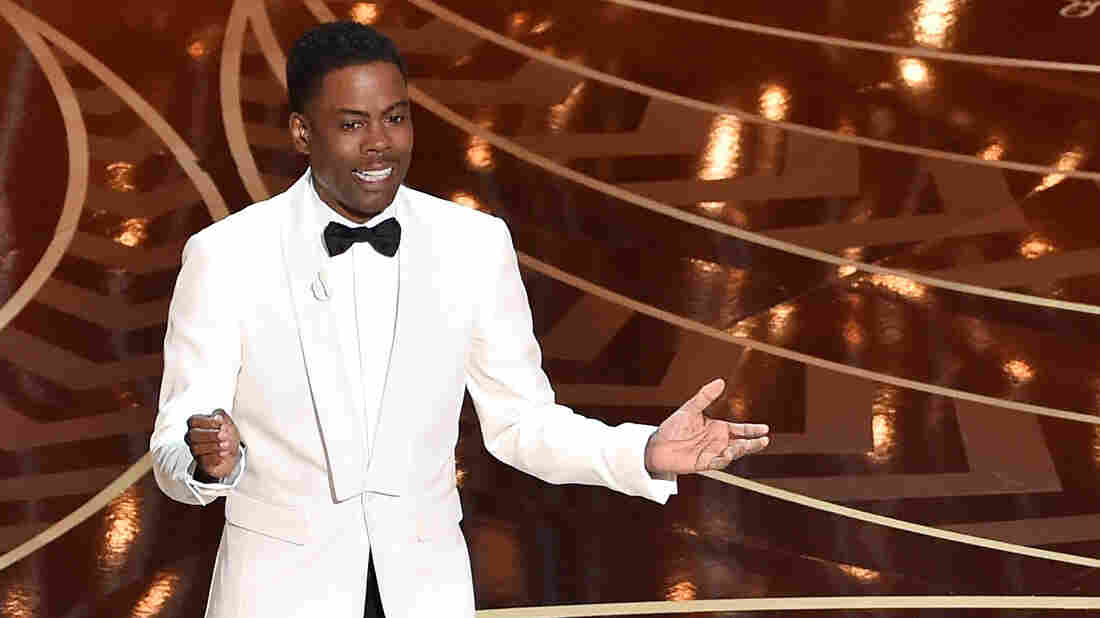 Chris Rock hosted the Oscars on Sunday night, and he spent a lot of time on the issues of diversity the academy is facing. Kevin Winter/Getty Images hide caption 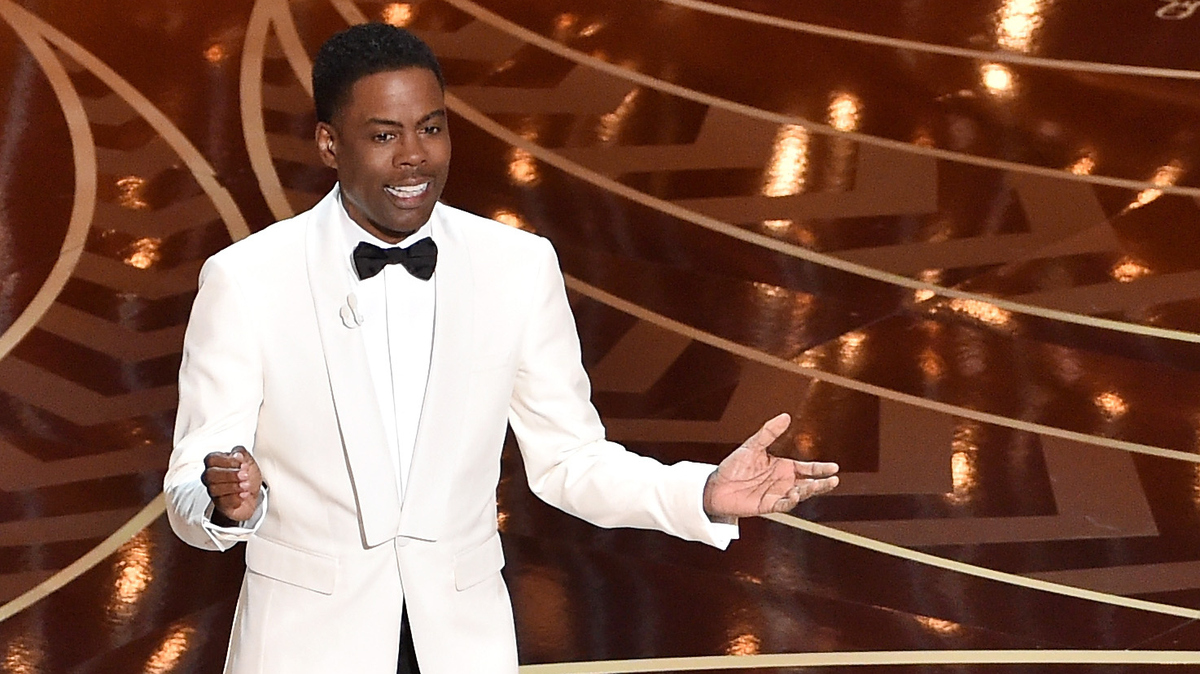 Chris Rock hosted the Oscars on Sunday night, and he spent a lot of time on the issues of diversity the academy is facing.

Rock did raise issues of representation throughout, though, shouting out presenter Michael B. Jordan, the star of Creed, as a "shoulda-been nominee," for instance, and doing a funny segment with mostly black moviegoers at a real movie theater, who demonstrated that they hadn't seen and didn't care about most of the films nominated for best picture. (Quite honestly, lots of white moviegoers wouldn't either.) Kevin Hart, too, acknowledged actors of color who weren't nominated before introducing The Weeknd to perform his nominated song from Fifty Shades of Grey.

But the Oscars ceremony has a way of writing its own awkward moments, as when the orchestra played off one of the winners for Mad Max: Fury Road just as he attempted to thank people from Namibia, where the film was made, or when they played off the winner for best documentary short as she explained that her film may help motivate a change in Pakistani law on honor killings. Both, by the way, involved "Ride of the Valkyries," the get-lost music of the evening, which is not the most gentle of musical nudges, as Bugs Bunny learned so long ago.

And that was before a bizarre little skit involving Asian kids — one that didn't land at all — made all the talk of diversity seem weirdly hollow. Cutting the skit could have provided enough time for the explanation of the law on honor killings, for instance.

The awards themselves were spread out from the beginning. Spotlight grabbed one early for its original screenplay, then awards followed for The Big Short for its adapted screenplay, The Revenant for its cinematography, Alicia Vikander of The Danish Girl for supporting actress.

The contender that started piling up awards, in fact, was Mad Max: Fury Road, for its hugely stylish production design, makeup, costumes, film editing, sound editing and sound mixing. The film had six Oscars before the halfway point of the broadcast. Given the fact that nobody really believed Mad Max was going to win best picture (and it even lost the visual effects prize to Ex Machina), this mishmash kept an early favorite from running away with the show, which was at least something of a bulwark against boredom.

In the big categories handed out in the last push, Brie Larson won lead actress for Room, The Revenant won for its director, Alejandro Gonzalez Inarritu, and its lead actor, Leonardo DiCaprio, and Spotlight, directed by Tom McCarthy, won best picture.

As always, there were segments that seemed like pointless filler designed to ensure the thing wouldn't be brought in on time, like a needless walk-on by the Star Wars droids that elicited little response on Twitter, at least, other than from people who enjoyed watching Room's Jacob Tremblay get excited about it. (See also: Minions.)

There were surprises — a lot of folks expected to see Sylvester Stallone win best supporting actor for Creed and watched him lose to Rylance. And it's surprising to hear any particularly affecting staging of a nominated song given how lackluster they often are, but Lady Gaga's performance of "Til It Happens to You" from the documentary The Hunting Ground — a performance introduced by Vice President Joe Biden — got instant praise. And The Revenant director Inarritu, winning best director for the second year in a row, managed to defeat the band that tried to play him off as he expressed his hope for a world without prejudice.

Rock will take criticism for some jokes and be praised for others, but at the very least, he paid sustained attention for 3 1/2 hours, in front of a very large audience, to issues of inclusiveness in the academy and in Hollywood as applied to black people. It's about three hours and 25 minutes more than some hosts would have paid before moving on to something else, and if it was uncomfortable at times, then perhaps that's the downside of coming to the end of the era in which you could nominate 20 actors, have all of them be white, and expect that not to make your ceremony uncomfortable.