Accessibility links
Understanding The Clintons' Popularity With Black Voters Everyone takes it for granted that the Clintons are popular with African-American voters. Where did that goodwill originally come from? 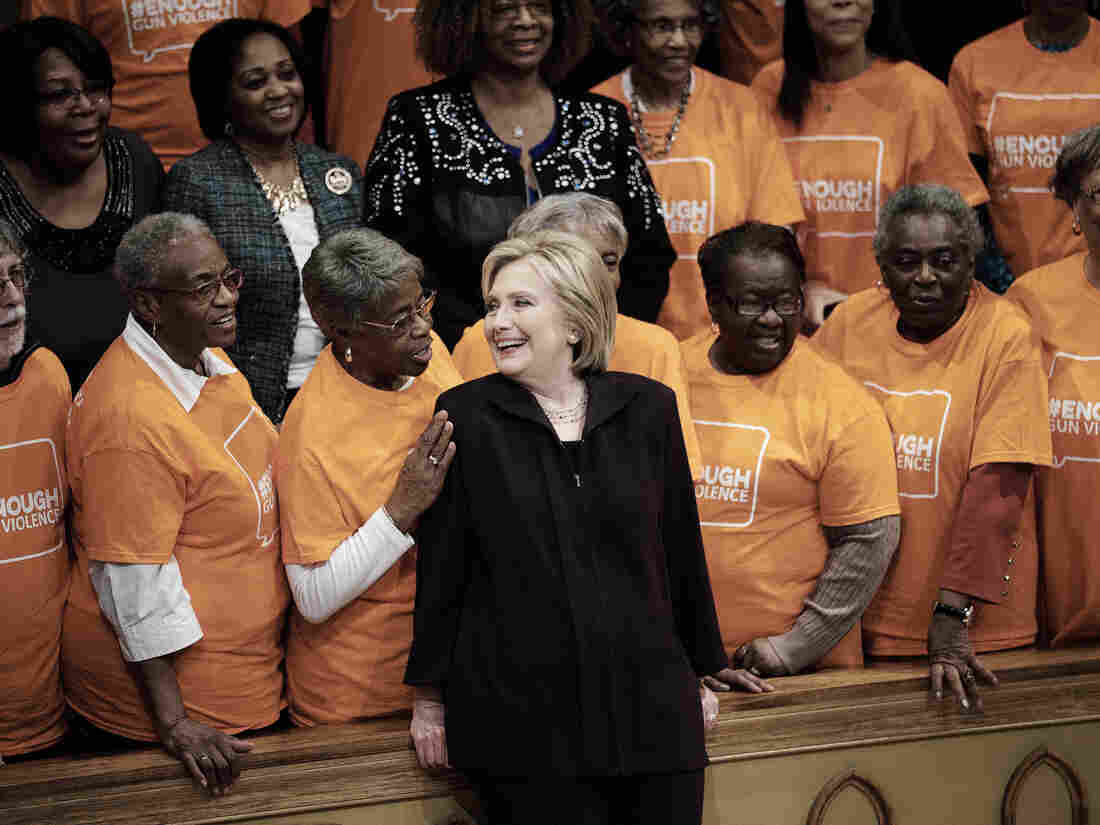 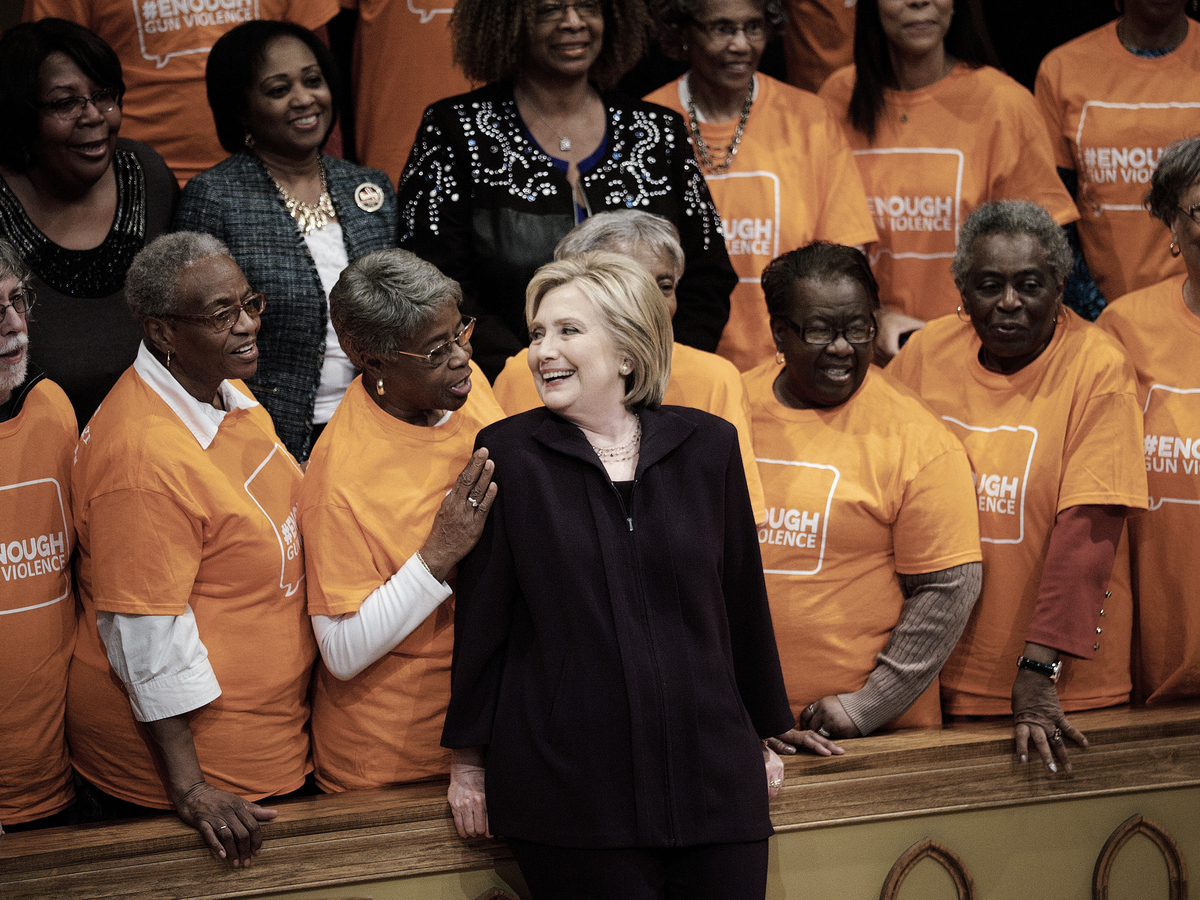 Hillary Clinton's win in the South Carolina Democratic primary was a blowout, and black voters in particular are being credited with handing her that victory. More than 8 in 10 black voters in that state voted for Clinton, according to exit polls. If that trend holds, she could have a great day on Super Tuesday, when several states in her Southern "firewall" — several of which have substantial black populations — will vote. 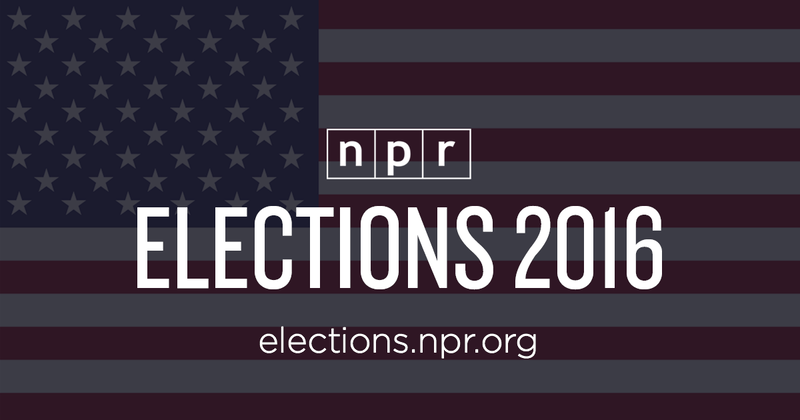 There are a lot of reasons for her strength with this demographic: her name recognition, her record and her politics, for example. But it's not just her; the Clintons are simply popular among African-Americans.

It's true that Bill Clinton enjoyed heavy support from the black community in the 1990s. But as Hillary Clinton seeks the nomination herself, some are raising questions about just how good the Clinton presidency was for black Americans — not to mention whether Hillary Clinton should get any credit (or, alternatively, blame) for her husband's legacy.

In fact, history has misunderstood that "first black president" idea, as Ta-Nehisi Coates wrote last year. Author Toni Morrison later said she was trying to talk not about Clinton's popularity with black voters but his treatment in the public arena, especially following the Monica Lewisnky scandal ("I said he was being treated like a black on the street, already guilty, already a perp").

But history has decided that the quote is a compliment — a way to talk about Clinton's popularity with black voters. And that popularity, at least, is undisputed. In 1992, the New York Times editorial board, reflecting on the fact that Clinton won 75 percent of the black vote on Super Tuesday, gushed about America's advances against racism:

"Governor Clinton may or may not go on to win the Democratic nomination, and he may or may not give President Bush a hard run in the fall. But either way, that one figure gives healthy evidence, probably for the first time since Robert Kennedy's Indiana primary campaign in 1968, that it is politically possible to bring poor blacks and blue-collar white voters together. It is finally possible for Americans to transcend racial division and look instead to mutual interest."

What drove that popularity? In part, it was regionalism. Clinton did particularly well among Southern African-Americans, and the fact that he was from Arkansas probably helped him.

"Because of his Southern heritage, he appeared to be very, very comfortable in African-American communities," says Andra Gillespie, an associate professor of political science at Emory University. That ease, Gillespie said, ranges from his famous sax-playing appearance on The Arsenio Hall Show to his ease on the campaign trail in interacting with black voters — it "sort of hinted at a certain type of cultural fluency that was welcome to African-American voters," she added.

His Southern heritage probably helped him with white voters, too, though — hence the nickname "Bubba."

And once he was in office, he tried to show he was reaching across color lines.

"I think that a mixture of his personality and his politics really made him relatable and likable to many in the black community," said Stefanie Brown James, who did African-American outreach for the 2012 Obama campaign. He believed in affirmative action, for example, pushing to "mend it, don't end it" when it came under fire. And he appointed African-Americans to high-profile positions — in 1993, he appointed four black Cabinet secretaries. That "speaks volumes to the black community," Brown James said.

"I remember stories about how amazing it was to see him on the golf course with Clinton — a black man playing golf, of all sports, with the president was a big deal then," she said.

Being at ease among black voters, golfing with his black friend, appointing black Cabinet secretaries, going on a late-night talk show — from the standpoint of 2016, these can seem less than remarkable, but a decade and a half before the first black president would be elected, these were powerful actions.

The Clinton years were also known for a booming economy. During that time, the median household income in African-American households grew by 25 percent, twice as fast as it did for all households nationwide. In addition, African-American unemployment plummeted from 14.1 percent to 8.2 percent (of course, the unemployment rate also fell for other groups). And the administration touted its record of boosting loans to minorities.

Bill Clinton may have had the support of many African-Americans, but today, some have deemed two of the most famous Clinton-era legislative achievements a failure for black America.

Michelle Alexander makes this case in a scathing recent article for The Nation ("Hillary Clinton Doesn't Deserve The Black Vote"), pointing to the 1994 crime bill and 1996 welfare reform bill as evidence that the Clinton presidency was, in fact, bad for black Americans.

She's not alone. The welfare reform bill was controversial from the moment it was signed. Peter Edelman, an assistant secretary at the Department of Health and Human Services who worked on poverty issues, resigned because of his opposition to the bill, later saying it would "hurt millions of poor children."

And the criticism has continued over the years, particularly from the left. Proponents argue that welfare reform helped reduce poverty and encourage work. However, it also left many families vulnerable, as Brookings' Ron Haskins argues, like those where a single parent faces several hurdles to getting a job (lack of transportation, lack of child care, depression).

Indeed, after reform, the number of poor children whose families received welfare assistance plummeted. Not only that, but some research suggests welfare reform led to an increase in extreme poverty — that is, families living on less than $2 a day. And this economic issue is a race issue as well: Families living in extreme poverty are disproportionately minority households.

Likewise, the black prison population skyrocketed on Clinton's watch, and his 1994 crime bill, with its three-strikes provision and increased number of capital crimes, is often considered a driver of that trend.

The black population is currently disproportionately incarcerated, with black men six times as likely to be incarcerated as white men, according to the Pew Research Center.

Not only that, but there are a few holes in the idea that the "Clinton economy" was all that great, especially for black America. First of all, presidents do not really have a lot of control over the economy and tend to get far more credit (or blame) for it than they really deserve.

And even if it were Clinton's doing, the economy in the 1990s wasn't nearly as good for African-Americans as many perceived it to be, as Melissa Lacewell-Perry found in a 2005 study. Moreover, the poorest black Americans grew worse off.

"As Clinton performed blackness, real black people got poorer," she wrote in 2008.

And while the unemployment rate fell throughout the 1990s, "the jobless rate among black men in their 20s who didn't have a college degree rose to its highest level ever," Alexander writes. Why? High incarceration rates.

Of course, Bill Clinton didn't pass (or write) the crime bill himself; indeed, two-thirds of Congressional Black Caucus members voted for it. At the time, the bill was considered "imperfect but necessary," as Slate puts it, given America's crime problems in the 1990s. And it's not even entirely clear that it played a big role in driving up incarceration, as German Lopez writes at Vox.

Still, it's not exactly the former president's proudest achievement; two decades later, Clinton himself has renounced it.

The positives and negatives of Bill Clinton's policies can (and will) be dissected ad infinitum. But it's still not clear how much blame or credit Hillary Clinton deserves for her husband's policy legacy.

It's true that Bill presented her as a sort of co-president, as Carl Bernstein writes in his 2008 Hillary Clinton biography, A Woman In Charge, and that she had a particular interest in the politics of welfare reform.

"Hillary had never publicly opposed any legislation or policy of her husband's administration, but her views about welfare were strongly held and probably more complicated than his," he wrote, adding later that her pragmatism eventually led her to support the third pass at a welfare reform bill. (President Clinton vetoed two earlier welfare reform bills.)

"In Hillary's autobiography, she described the bill as hardly perfect, and conceded that pragmatic politics had figured in her willingness to support the measure. She felt it was better to allow the bill to become law with a Democratic administration in charge of implementing it," he wrote.

Of course, she didn't sign bills; he did. But regardless of her part in any of that, voters lump the Clintons together, for better or worse. Many Clinton supporters see her husband as an asset. Many Sanders supporters, not to mention Black Lives Matter activists, meanwhile, see former President Clinton's policies as harmful, and some extend their wariness of the former president to his wife.

Likewise, her own words during her husband's presidency have come back to haunt her. In 1996, she infamously referred to young "superpredators" as one reason for the high crime rate, in comments that are seen as racially charged.

"No conscience, no empathy, we can talk about why they ended up that way, but first we have to bring them to heel," Clinton said at the time.

A Black Lives Matter activist confronted her about the quote recently, and afterward, she backpedaled her 1996 rhetoric.

"Looking back, I shouldn't have used those words, and I wouldn't use them today," she told the Washington Post.

Still, Clinton has her own legacy to run on. Her campaign has been touting parts of this in recent ads — her legal aid work, for example. She also benefits from her work with another high-profile president. Voters who like and defend Obama also see Clinton as an extension of his legacy.

All of this gets to the complexity of choosing a candidate — not to mention the fact that no group is a monolith.

Many older Democratic voters of any race appreciate Clinton's rhetoric on strengthening Social Security. Many women (and men) of any ethnicity appreciate that she would be the first female president. Likewise, young voters of all colors are feeling the Bern.

While it's true that African-Americans vote overwhelmingly Democratic, identity is just one small part of the many factors playing into the choice between Clinton and Sanders.