For 15 years, biologists in single-person, ultralight aircraft would each lead an experimental flock of young whooping cranes from Wisconsin to a winter home in Florida. But not anymore.

When a whooping crane stands up, you notice. At 5 feet in height, it's America's tallest bird. Its wingspan is more than 7 feet, its body snowy white, its wingtips jet black.

By the 1940s, the birds had nearly gone extinct. Biologists have worked hard to bring them back, by breeding whoopers in captivity and releasing them in the wild. There are now several small wild populations in the U.S.

Perhaps the most remarkable is the eastern group. For 15 years, biologists have been teaching some of the young cranes to migrate between Wisconsin and Florida by leading them with an ultralight, one-person aircraft.

Now, however, biologists have discovered that teaching the cranes to migrate seems to have created serious problems for the birds — they rarely reproduce successfully. The Federal Fish & Wildlife Service has halted the flights and is now trying to figure out what went wrong.

The irony here is that the migration project, a leap of faith and a scientific gamble, worked. 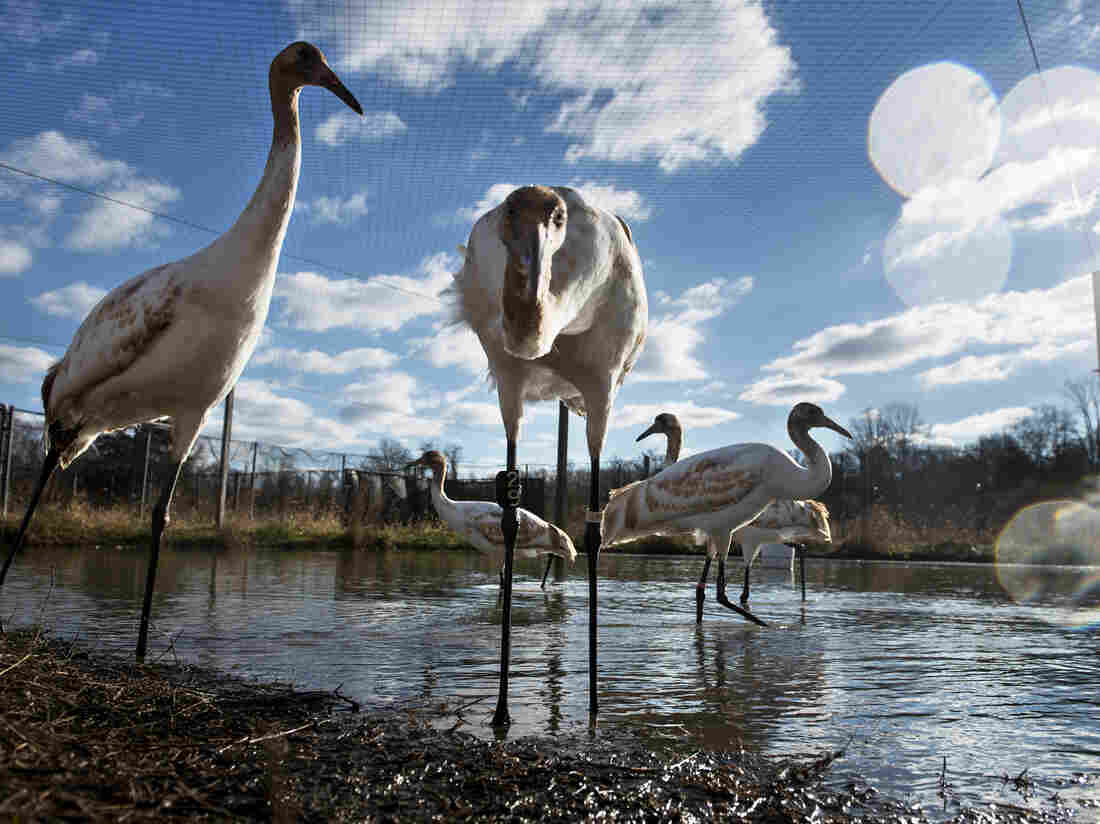 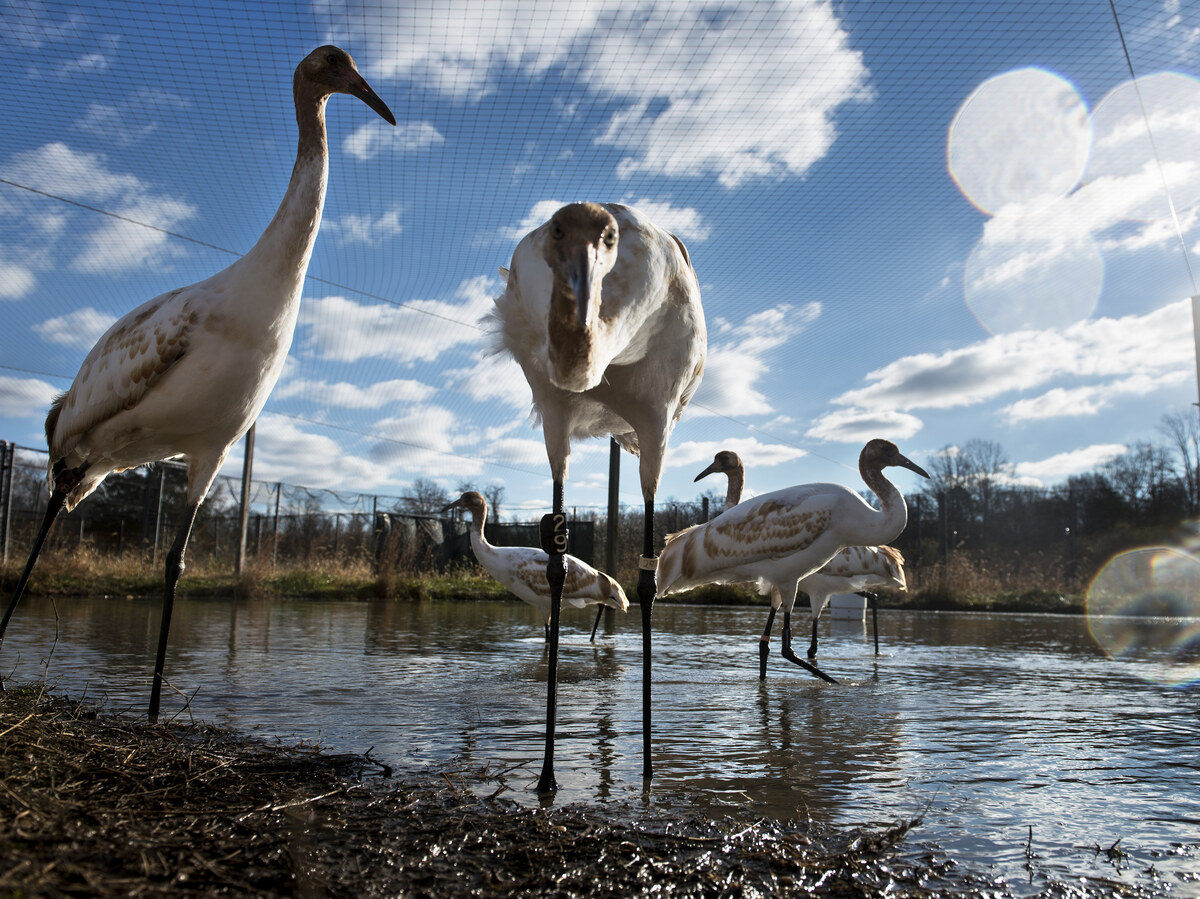 Biologists hoping to bring endangered whooping cranes back from the brink started an experimental flock in 1967 at the U.S. Geological Survey's Patuxent Wildlife Research Center in Laurel, Md.

It was a terribly difficult experiment. Biologists breed the birds at the Patuxent Wildlife Research Center in Laurel, Md. Every person involved wears a long white coat and a hood. They even wear phony beaks. The aim is to keep the young birds from imprinting on people — seeing their human caretakers as parents. Instead, the researchers want the birds to consider the ultralight aircraft and its pilot, also costumed like a bird, as their leader. To that end, while still very young, the whooping cranes are introduced to the plane on the ground and encouraged to follow it and its pilot around.

One of those pilots is Joseph Duff, a burly dark-haired Canadian. "You become actually a part of their social structure," Duff says. "You are the dominant bird — the parent bird within the flock."

Duff calls himself an "avian aviator." For 15 years, he's been flying his one-man aircraft alongside whooping cranes that have been bred in captivity. Once they are old enough to fly, they are packed off to Wisconsin, where they live until it's time to take off alongside Duff and other pilots to fly to their winter home in Florida.

This spectacle draws crowds of craniacs who follow the migration and videotape Duff and the birds as they fly overhead. Duff says videotape can't begin to capture the feeling of actually flying with these huge cranes.

"When you have this bird with an 8-foot wingspan right off your wingtip and you're a thousand feet up and they're all around you," he says, "(with) the sun shining on them ..." His voice trails off. "It's hard to describe," he admits.

Duff grew up in Canada's North Woods, with no special feeling for birds. But he did love to fly. Biologists approached him 15 years ago, saying they'd bred a few eastern whooping cranes in captivity. They wanted pilots to teach these naive, captive-bred birds how to migrate, so that the birds could become real, wild whooping cranes again. The project was called Operation Migration, and Duff signed on.

"Oh, it's changed me completely," Duff says. "It's just spectacular to watch a creature like that. I mean, it's been migrating for millions of years."

So far, about 100 birds now migrate up and down this eastern flyway. That, say biologists, is a success — but a partially empty one. You can't say you've re-created a wild population if it's not self-sustaining.

I went to Patuxent to learn more. It was a blustery day, and I had to walk through snow and up a flight of wooden stairs to a shack — a bird blind — to see the captive whoopers. Through an open window, I could see several leggy birds standing elegantly in fenced enclosures. With their long beaks and side-long glances, they seem a little fierce. Their call is a throaty screech.

"They're good-looking birds aren't they?" says Sarah Converse, my ecologist guide. She and other biologists at Patuxent are deeply invested in these birds. No place else has bred as many. She was exhilarated to see them actually migrate, she says, but devastated when it started to become clear that once the cranes arrived at the Wisconsin breeding grounds, they just didn't reproduce.

The cranes mate well enough. But fewer than 1 in 10 reproducing pairs actually raises a chick that lives more than four months.

"It's not like we're almost there with reproduction," says Converse. "We're not really anywhere close. And so it sort of suggests that there's something wrong with the birds and the way they behave."

The parents may not be staying with the eggs long enough. Or they may not know how to protect the eggs or the newly hatched chicks from predators.

But then how would they know? John French, the biologist who runs the crane program at Patuxent, isn't surprised that the captive-bred birds are confused. They were raised by humans; even though they are white-robed, beaked people who manage to fly with the whoopers, they're still human.

"It's a very odd experience for the bird," says French. "They would never do that in the wild. And we really don't know how that affects the bird."

So the scientific team has stopped the flight training. It requires too much interaction between chicks and humans, and probably not enough time with their avian parents. The biologists suspect the chicks are missing some lesson about how to be good parents themselves, something they pick up early from being parented.

Or, perhaps, captive-bred birds have become genetically different from birds in the wild, and lack some crucial gene for good parenting, French says. Whatever the case, it's a lesson on how difficult it is for people to re-create something that took millions of years of evolution to make.

"I think we're finding out the ark that we've built, you know, might not be the best way to preserve them," French says. "We might have to think of a different kind of ark. Our goal here, now, is to step back as far as we can from that human interaction and, you know, let them develop as a bird."

So the chicks will now stay with their parents in Patuxent for their first year, with a minimum of human contact. Then they'll be transported to their breeding sites in Wisconsin via crates inside a plane. They'll be released to join the existing population of adult cranes in Wisconsin, and nature will take its course.

Researchers have found that adult cranes will happily "adopt" young birds that aren't their own. As for migrating back South, there are enough mature birds now that know the route to teach the newbies the flight path without an ultralight aircraft leading the way.

At least that's the hope.

As for Joe Duff and Operation Migration, the end of his career as an avian aviator was hard to take, especially his last flight with the cranes, on Feb. 6. The wind was too strong to fly, but he tried anyway, and got forced down.

He read me what he wrote about the end of the project, and that last flight, in a voice that betrayed his sadness.

"It is the proper thing to do," he wrote, "but somehow it should have ended differently. There should have been clear skies, a colorful sunrise, a string of courageous birds off my wingtip. But nature doesn't work that way, and I should have known better."