Accessibility links
Review: Lucius, 'Good Grief' As rapturous as the band's second album feels in its catchiest moments, it's all in service to songs that touch on the dueling bittersweet experiences of love. 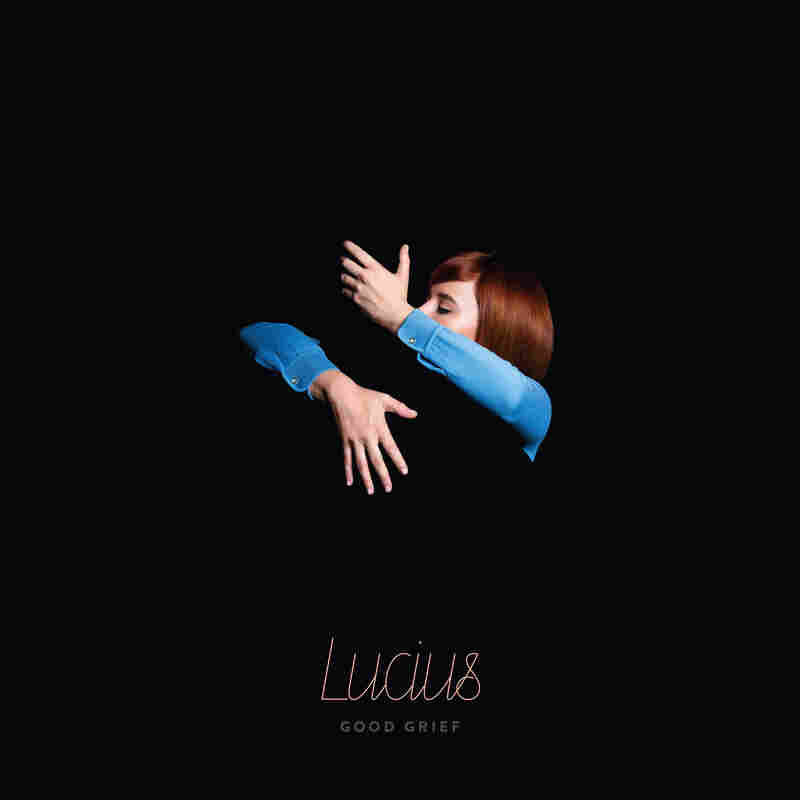 "I had a dream where you were standing there with a gun up to my head." This is how Lucius drops us, in medias res, into "Madness," the evocative first song on the band's second album, Good Grief. What unfolds is a lucid dream-chase sequence that captures a desire to pull the escape hatch and go on wild adventures full of danger and doomed affairs: "Maybe I'll drive myself to madness / Spinning in circles, don't have it figured out just yet," Lucius' Jess Wolfe and Holly Laessig sing in unison.

The two instantly won over fans with their gorgeous, joyful songs, not to mention their matching retro outfits and mod mirror-image haircuts — an eye-catching calling card that symbolizes the musical unity between Laessig and Wolfe and their bandmates, multi-instrumentalists Andrew Burri, Peter Lalish and Dan Molad. But as the group pushes its guitar-driven, folk-infused pop toward a broader, more sparkling palette, the blustery ballad provides a dramatic reintroduction.

Good Grief was written and recorded after two years on the road in support of 2013's fantastic Wildewoman — a period that saw the band blow up from Brooklyn favorite to an act capable of packing spacious music clubs, becoming a staple at summer festivals, and performing alongside musicians like Mavis Staples and Wilco's Jeff Tweedy. Produced with Shawn Everett and Bob Ezrin, Good Grief is invigorated by glitzy production that brims with sounds: pulsing analog keyboards ("Something About You"), trilling guitar lines ("Almighty Gosh") and big '80s disco beats ("Almost Makes Me Wish For Rain"), all tailored to fill those sprawling venues. Nearly every song peaks with epic singalong choruses, led by Laessig and Wolfe as they belt their hearts out.

As rapturous as Good Grief feels in its catchiest moments, it's all in service to songs that touch on the dueling bittersweet experiences of love. Throughout the album, Lucius offers up intimate snapshots in the arc of a romance — from early excitement ("Born Again Teen") to stormy fights and the lonely aftermath of "My Heart Got Caught On Your Sleeve," wherein they lament, "Smoked another cigarette, 'cause even though I quit / I'd do about just anything to pacify my own torment." "What We Have (To Change)" begins simply with a stark piano and stirring close harmony, as they mull over the great lengths they'd go to rekindle a neglected relationship: "Find me a mountain or any grand canyons / Just find us an igloo and I'll freeze with you," they offer in swooning unison.

The album reaches a climactic highlight in "Gone Insane," which alludes to one of those all-too-real arguments where things cannot be unsaid. As they chant, "Oh, I must be the one the who's gone insane!" over and over, Laessig and Wolfe's voices become increasingly frayed upon each cycle, as if crying, screaming and maybe losing it altogether. That pivots nicely into "Truce," in which two warring parties attempt to allow cooler heads to prevail: "This leads to nobody's win, why don't we bury this thing... we haven't flown too far to save our lonely hearts."

At the end, in "Dusty Trails," Lucius goes back to its roots with a gospel-infused folk song most like its earliest music, as if returning home after a long time away and taking stock of recent successes and growing pains: "It's all a manual that we've been writing, a future instructional guide / if we skipped ahead to our pre-fulfilled dreams, we'd be lost without our own advice." In the end, they reassure themselves, "We'll be all right." For Lucius, it's yet another graceful high point, demonstrating the way Good Grief warmly captures life's agonizing lows and triumphant highs.