Accessibility links
Texas Abortion Law Tested By Supreme Court At issue is whether a Texas law requiring clinics to meet surgical-center standards is aimed at safeguarding women's health or unconstitutionally limiting a woman's right to terminate a pregnancy. 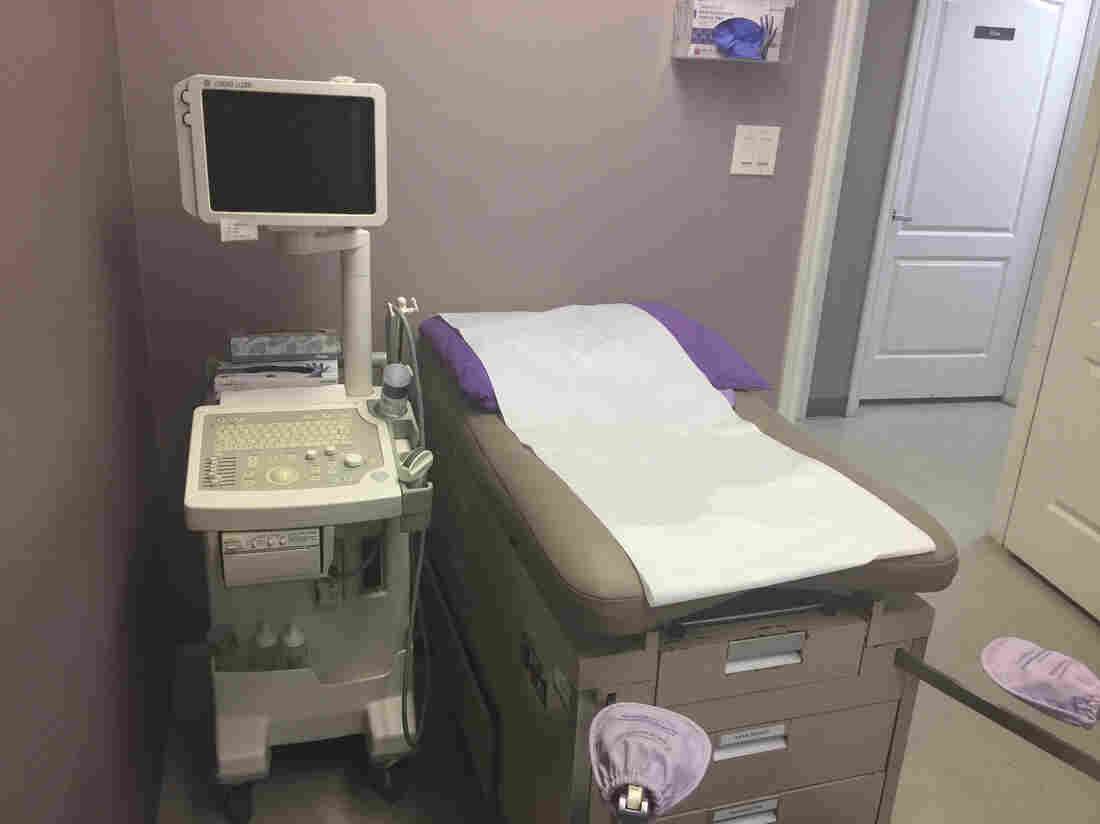 The examining rooms in the Fort Worth clinic do not meet the emergency-room-like standards of the Texas abortion law known as HB 2. It would cost more than $1 million to upgrade this facility, and the clinic's operators say it would be forced to close. Barry Gordemer/NPR hide caption 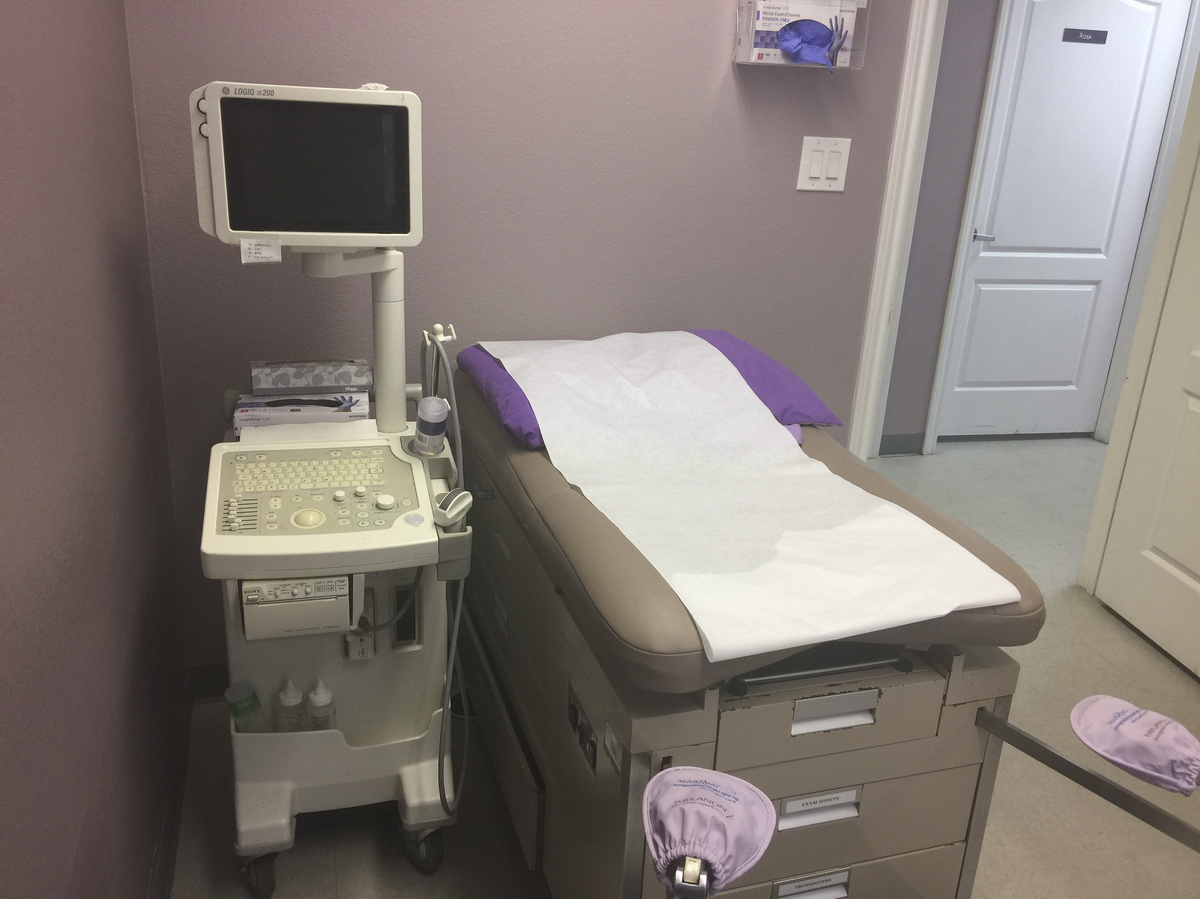 The examining rooms in the Fort Worth clinic do not meet the emergency-room-like standards of the Texas abortion law known as HB 2. It would cost more than $1 million to upgrade this facility, and the clinic's operators say it would be forced to close.

Even with the death of Justice Antonin Scalia, Wednesday could mark a potential turning point for the Supreme Court on the subject of abortion. At issue is whether a new Texas law imposes restrictions that unconstitutionally limit a woman's right to terminate a pregnancy.

Last June, a federal appeals court upheld the law. If the Supreme Court agrees, it would mean a dramatic cutback on abortion rights across the country, and potentially a steppingstone toward the reversal of Roe v. Wade.

The Texas Omnibus Abortion Bill, known as HB 2, requires all abortions — either surgical or medical, meaning with pills — to be done in ambulatory surgical centers. Such facilities are mini-hospitals, with wide corridors, large operating rooms and advanced HVAC systems, among other requirements. A second provision requires doctors performing either surgical or medical abortions to have admitting privileges at a hospital within 30 miles of the clinic.

The state says it enacted these provisions to protect the health and safety of women. Virtually the entire established medical profession, both in Texas and nationally, disagrees.

The American Medical Association and the American Academy of Family Physicians, among others, have joined the American College of Obstetricians and Gynecologists in telling the justices that these provisions are "unnecessary" and "harmful" to women's health and safety. The major medical groups contend that the law erects gratuitous barriers to abortion, adds needless expense, and — by causing the closure of so many clinics — creates significant delays that sometimes push abortions into the second trimester.

At a Fort Worth, Texas, clinic that performs abortions, the protesters were out early in the morning — and so were the patients, some of whom had traveled long distances by car and bus to get here.

"I figured there'd be another clinic in my city, and come to find out there wasn't," said one woman, who, like all the women we spoke to, declined to give her name for fear of harassment.

She had taken the day off, arranged for child care and driven nearly 150 miles from home to get an abortion.

Prior to HB 2, there was in fact a clinic in her home city, but it closed on the day the new Texas law went into effect in 2014. Indeed, before the law was enacted, there were 41 clinics in the state that perform abortions. Today there are 19, and if both of the provisions at issue in Wednesday's case are upheld, at least 10 of those 19 would close, including this one in Fort Worth.

For one of the bill's co-authors, the issue is a personal one: State Rep. Jason Isaac says his mother was born as the result of a rape.

"I don't believe that I would be here today conducting this interview if Roe v. Wade were in effect in 1944," Isaac told NPR. "We can't end abortion in Texas, but we can make it as safe as humanly possible."

Texas Solicitor General Scott Keller will tell the justices that 10 women per week visit emergency rooms for complications from abortions, and that the ambulatory surgical center standards are necessary for dealing with more acute emergencies, "ensuring that EMTs can have access to the facilities" and that "there's not a maze of hallways." 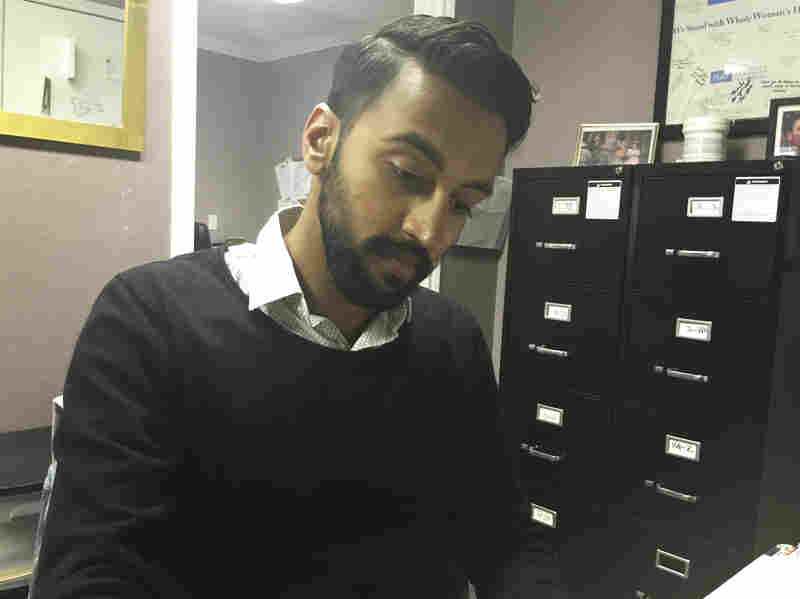 Dr. Bhavik Kumar has been performing abortions at the Fort Worth, Texas, clinic for about a year. He says abortion is a simple procedure, and in the cases he's had, there have been no complications requiring a woman to be hospitalized. Barry Gordemer/NPR hide caption

At the Fort Worth clinic, hallways are only a little more than half the 8-foot width of the state law requirements — but, as Dr. Bhavik Kumar points out, wide enough for a stretcher. In case of an acute emergency, he says, a clinic staffer would wait outside to direct EMTs to the appropriate back door so that they would have quick and easy access to the hallway and procedure rooms.

The doctor says that in his year at the clinic, he's had no emergencies requiring outside medical help.

"It's a simple procedure — about five to eight minutes, depending on how far along they are," Kumar says.

Kumar notes that there is no general anesthesia, as is necessary for colonoscopies, liposuction and other procedures that aren't as strictly regulated in Texas.

"Actually, it's much safer than colonoscopy," says Dr. Hal Lawrence, executive vice president and CEO of the American Congress of Obstetricians and Gynecologists. "As time has moved forward, we have seen how safe abortion is."

Indeed, one study published in the American Journal of Public Health found that major complications for first-trimester surgical abortions occur in 1 in 2,000 of all such procedures. 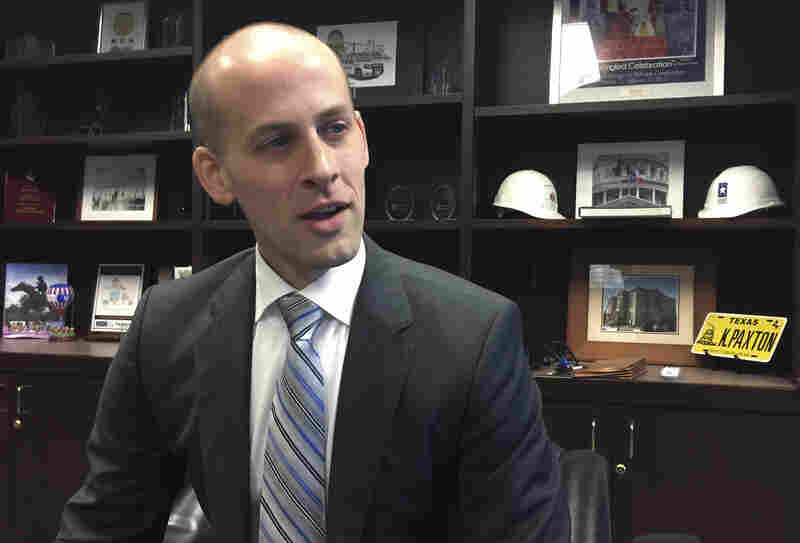 Texas' Keller maintains that in fact there have been more complications from medical abortions than from surgical abortions. That, he says, is among the reasons the state law requires all abortion doctors to have privileges in a nearby hospital.

"It's not as if abortion is completely safe, without any complications," Keller says. "Everyone admits that there can be significant health consequences from these complications."

But the brief filed by major medical associations says that in modern medicine, doctors increasingly are giving up hospital privileges to in-hospital doctors. And, says Lawrence, if an abortion patient does go to the hospital with some sort of complication, "there are obviously emergency room physicians there, and OB-GYNs at those hospitals, that can help."

Most such complications, he adds, involve bleeding not significant enough to require hospitalization.

Lawyer Stephanie Toti, representing the clinics, will tell the Supreme Court on Wednesday that if the admitting privileges and ambulatory surgical center requirements truly offered a health benefit, they would apply across the board to other similar — and, indeed, more dangerous — outpatient procedures.

"The fact that Texas has singled out abortion by itself for the imposition of these requirements shows that their true purpose isn't to improve patient health and safety; it's just to burden abortion," she says.

The Supreme Court has allowed states to regulate abortion differently from other procedures, but the court ruled in 1992 that states may not impose an "undue burden" on a woman's constitutional right to terminate a pregnancy.

Texas argues that there is no undue burden here. Keller observes that even if many more clinics are forced to close, "every metropolitan area in Texas that has a clinic today will still have one."

The clinics counter that so many clinics have had to close under the law that vast expanses of Texas, the second-largest state in the country, already are uncovered — and that the remaining clinics have long wait times.

That was borne out by the women we met at the Fort Worth clinic. One woman in her 20s raced to the clinic when there was an unexpected cancellation, allowing her to get in weeks earlier.

"It'd be a very devastating thing for women not to be able to make their own choice, and have to wait a month and be even further along, to not be able to do this," she said.

Another woman drove 100 miles with her husband to get here because the clinics that perform abortions near her town had closed — and because the birth of her first child, she says, nearly killed her.

"I had a severe complication in the birth process, and the doctor advised me not to have any more — so here we are," she told us. Her husband ferociously interrupted our interview to say he did not want to be a widower raising a child without his wife.

Isaac, the co-author of HB 2, says that women who live hundreds of miles from the nearest clinic should acknowledge that reality and act accordingly.

"Hopefully," Isaac said, "they'll be more preventative and not get pregnant." Women who live far from a clinic should realize, he said, that, "Hey, that might still be an option legally, but now I live 300 miles away from the nearest place — I should probably be more careful."

Despite the death of Scalia last month, Justice Anthony Kennedy remains the likely swing vote in the Texas abortion case. If he votes to strike down the law, there would be at least a 5-to-3 majority for that outcome. But if he votes to uphold the law, the court would very likely be tied on a 4-to-4 vote. That would leave the Texas abortion law in place, at least until a full nine-justice court considers the issue at some later time.

Beyond Texas, that would affect 13 other states that have enacted similar laws. Some have been blocked by the lower courts, while others have not — and until the issue is resolved, the lower regional court decisions will dictate the results, state by state.