Accessibility links
Is A Brokered Convention The Most Likely Way Republicans Can Stop Trump? Republicans opposed to Donald Trump are running out of time and options to stop him from being their nominee. Many are now talking about their last, best chance being at the convention.

Is A Brokered Convention The Most Likely Way Republicans Can Stop Trump?

Is A Brokered Convention The Most Likely Way Republicans Can Stop Trump? 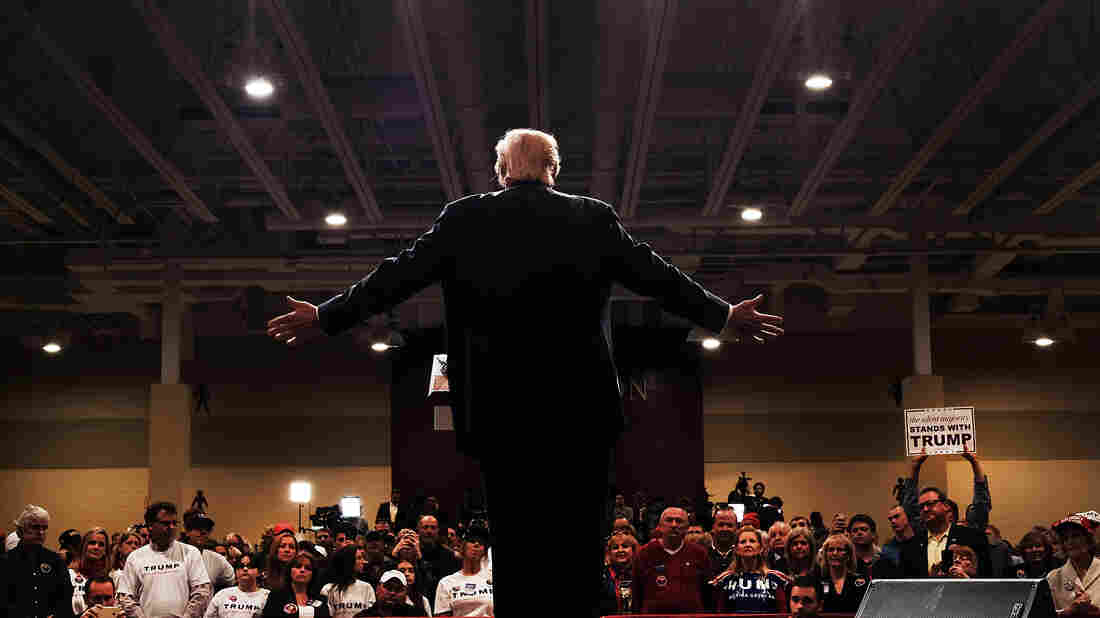 Donald Trump addresses a crowd in South Carolina. Trump has the clearest path to the GOP nomination, but Republicans opposed to him aren't giving up the fight. Spencer Platt/Getty Images hide caption 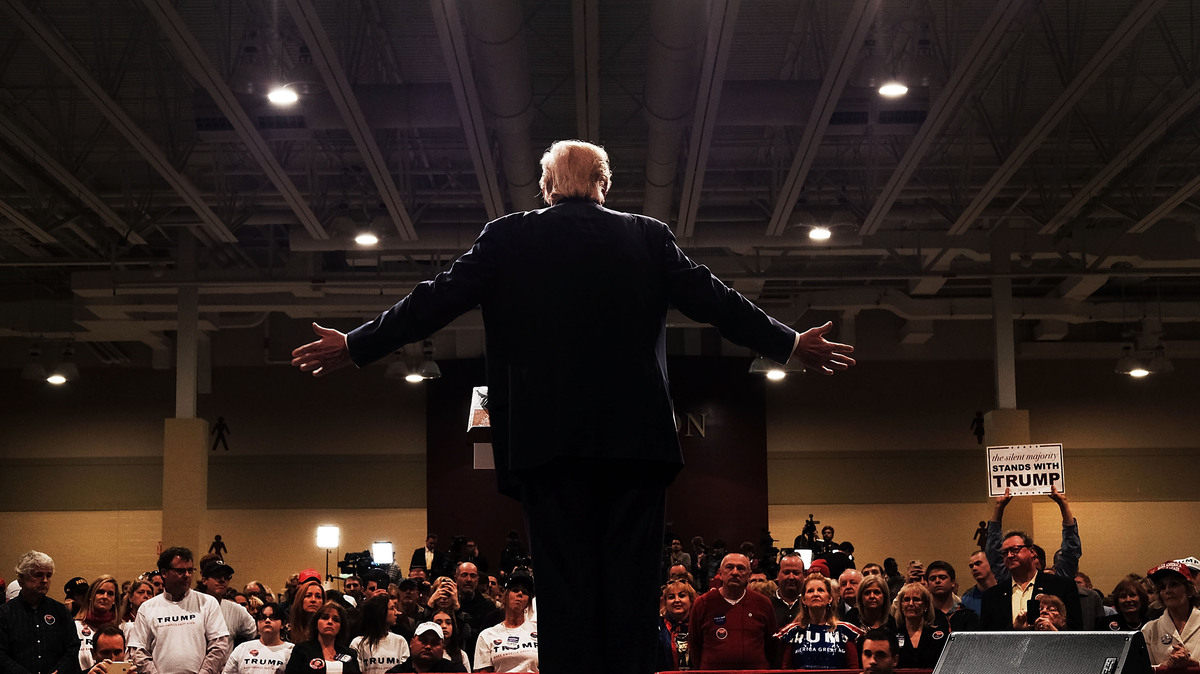 Donald Trump addresses a crowd in South Carolina. Trump has the clearest path to the GOP nomination, but Republicans opposed to him aren't giving up the fight.

There's a first time for everything. That's certainly held true in this campaign dominated by Donald Trump.

And Republicans opposed to Trump are beginning to abandon the idea that Marco Rubio (or anyone else) can win a majority of delegates before the first round of balloting at this summer's GOP convention in Cleveland, where the party will officially pick its nominee.

"We could be headed to a situation where there will be tremendous focus on trying to have a brokered convention — or a deadlocked convention because there aren't any brokers," GOP strategist Stuart Stevens, who helped run Mitt Romney's 2012 campaign, told NPR during special broadcast coverage Saturday night after the South Carolina primary.

How The Divided GOP Field Could Lead To A Contested Convention

How The Divided GOP Field Could Lead To A Contested Convention

"When you look at the math," Stevens said, "it is difficult to imagine a scenario short of a complete meltdown by Donald Trump, where one of these other two candidates [Rubio or Texas Sen. Ted Cruz] will have a majority of the delegates going into the convention at this point. It's possible, but it just starts to get in the real world very remote."

Romney himself, in his speech lambasting Trump on Thursday as a "phony" and a "fraud," called for the kind of strategic voting that would lead to a contested convention: "Given the current delegate selection process ... I would vote for Marco Rubio in Florida, for John Kasich in Ohio, and for Ted Cruz or whichever one of the other two contenders has the best chance of beating Mr. Trump in a given state."

So is that where this is heading — to a contested, deadlocked, brokered convention, where the party elites will try to rally around one alternative to Trump? It's one possibility, but there are a lot of things that have to line up before that happens — and a lot of contests to come. If it did get to that point, it would be the first time no one had enough delegates going into the first round of balloting at the convention in 40 years when incumbent President Gerald Ford and Ronald Reagan were locked in a tight battle. (Ford got enough votes before the first round of balloting.)

If it went beyond that, and no one had enough delegates after the first round of voting, it would turn into a brokered convention. That hasn't happened for Republicans in almost 70 years — in 1948 when Thomas Dewey emerged as the nominee. In both years, Ford and Dewey went on to lose in the general election.

The Numbers And Theories On How To Stop Trump

Trump now has a 319-226 delegate lead over Cruz in the delegate count. Rubio has 110, and Ohio Gov. John Kasich just 25. Those are all well short of the 1,237 needed for a majority to become the party's nominee. There are about 1,000 delegates in play over the next two weeks, including contests with huge caches of delegates like Michigan, Florida (Rubio's home state), Ohio (Kasich's home state), Missouri, Illinois and elsewhere.

Given that state of play, the race is far from mathematically over. Moderate Republicans, like former New Jersey Gov. Christie Todd Whitman (who said she would vote for Hillary Clinton over Trump), are pointing out that Trump doesn't even have a majority of the delegates that have been handed out already, so no one should be declaring the race over. But there are reasons why Republicans opposed to Trump are worried that things are pointing in Trump's favor and fear the train has left the station.

Here are three theories of how Trump could be derailed:

1. Someone other than Trump wins a majority of delegates. Some of the big states on March 15 and beyond award their delegates on a winner-take-all (or hybrid) process. That's opposed to the Republican National Committee's mandated proportional allocation that takes place up until that date. That could mean, if — and this is a huge if — (1) one candidate started beating Trump and the others in the remaining states, he would win. Or (2) if other candidates started dropping out, the Other Than Trump vote would coalesce around one candidate.

Sure, but Scenario 1 is highly unlikely. And the theory of the case for the OTT vote in Scenario 2 is potentially flimsy, because Trump appears to have started to expand his base, if Super Tuesday is an indication.

Rubio is who the establishment thinks is its strongest general-election candidate. For him to beat Trump head to head in a crowded field, he'd not only win his home state of Florida, but also Ohio and elsewhere. But Rubio is trailing Trump in Florida in recent polls. He is retrenching to try and hold on there, canceling events in Louisiana and Kentucky, which hold contests this Saturday.

"Has to win Florida," GOP strategist Stuart Stevens told NPR of Rubio. "I think everybody has to win their home state. I think it's just a level of threshold credibility — that it's win or go home."

What's more, in Ohio, Rubio not only has to contend with the current popular governor, Kasich, but Trump has been beating Kasich in the limited polling there so far. (Kasich could start trying to be really considered a viable option for the establishment, but he's got to show strength in Michigan on Tuesday since he's largely been out of the conversation since his second-place finish in New Hampshire.) Let's remember: Rubio has won one state — Minnesota — and finished behind Cruz in delegates Tuesday. Where does Rubio's momentum come from?

Cruz is in second place in delegates mostly because of his delegate-rich home state of Texas. His best state is already behind him. To start really being considered the principal alternative to Trump, he has to beat Trump in more places head to head with the kinds of "values" voters that are so crucial to his candidacy. He didn't do it Super Tuesday in Southern states like Georgia, Alabama and Tennessee. Cruz will have more opportunities in places like Kansas, Louisiana and Kentucky this weekend, Mississippi on Tuesday, and maybe Missouri, North Carolina and elsewhere March 15.

But while Cruz is struggling to win his targeted base against Trump, Trump is expanding. And that's maybe the biggest reason why he's got the clearest path to going to Cleveland with the most delegates.

2. Trump is held below a majority heading into Cleveland. But while Trump has a clear shot at the nomination and a clear shot at the most delegates, this is about getting 1,237. And in a crowded field that continues to split the vote, that can be tough to do.

Some party leaders, like Romney, believe Trump can be held below a majority, even if the OTT vote is split up, provided the OTT candidates keep winning and Trump's momentum doesn't sweep the country.

OTT supporters grew very nervous, though, watching those exit polls on Super Tuesday. Not every state after March 15 is winner-take-all. Nine are purely winner-take-all, and many are in "moderate" states. That would give hope to those OTTs, but where did Trump get his highest share of the vote on Super Tuesday? Massachusetts. This theory will be tested, but it's the establishment's best hope for at least having a path to stop Trump.

3. Someone other than Trump wins at convention even if he has the most votes. If Scenario 2 goes this way, it means a convention that goes old school, where the nominee isn't known going in. That would be a big change for modern politics. Conventions have come to be important places for party unity, especially after the messy, televised fights that played out in the 1960s and other decades. The last time there was a "brokered" convention on the GOP side, when a nominee wasn't known after the first round of balloting, was 1948.

So how would this work? What would play out?

The delegates would vote — and the ones chosen before March 15 are bound to vote for their assigned candidate. (This is a change from past years when the delegates could vote however they wanted. But it hasn't mattered, as noted earlier, in modern politics.)

Once the first balloting is over, the delegates can vote however they want — and that could mean chaos.

"[T]he individual delegates who have been elected by processes in their states need to make some tough decisions," Republican lawyer Ben Ginsberg told NPR's All Things Considered. Ginsberg helped write the rules for the RNC. "If a convention goes more than one ballot, then all those delegates become free agents. It would require a whip operation to keep track of the individual delegates, and to understand who and how to influence them and to get their votes will be something really unprecedented."

But imagine how difficult a case it would be to make if Trump goes in with the clear plurality of votes and delegates. Ginsberg said to watch March 15 and how that plays out. It could go a "long way" in determining if there's a contested convention, he said.

"There is a way with an unusually crowded field and a higher-than-usual number of candidates collecting delegates that this goes to a contested convention," Ginsberg said. "But you would not call it a probability at this point by any means."