Accessibility links
5 GOP Debate Takeaways: Republican Rivals Try To Take Down Donald Trump As He Slings Insults Marco Rubio and Ted Cruz allied to gang up on Donald Trump as he was pressed on immigration and foreign policy. John Kasich tried to rise above the fray in the nastiest GOP debate yet.

5 GOP Debate Takeaways: Rivals Try To Take Down Trump As He Slings Insults

5 GOP Debate Takeaways: Rivals Try To Take Down Trump As He Slings Insults 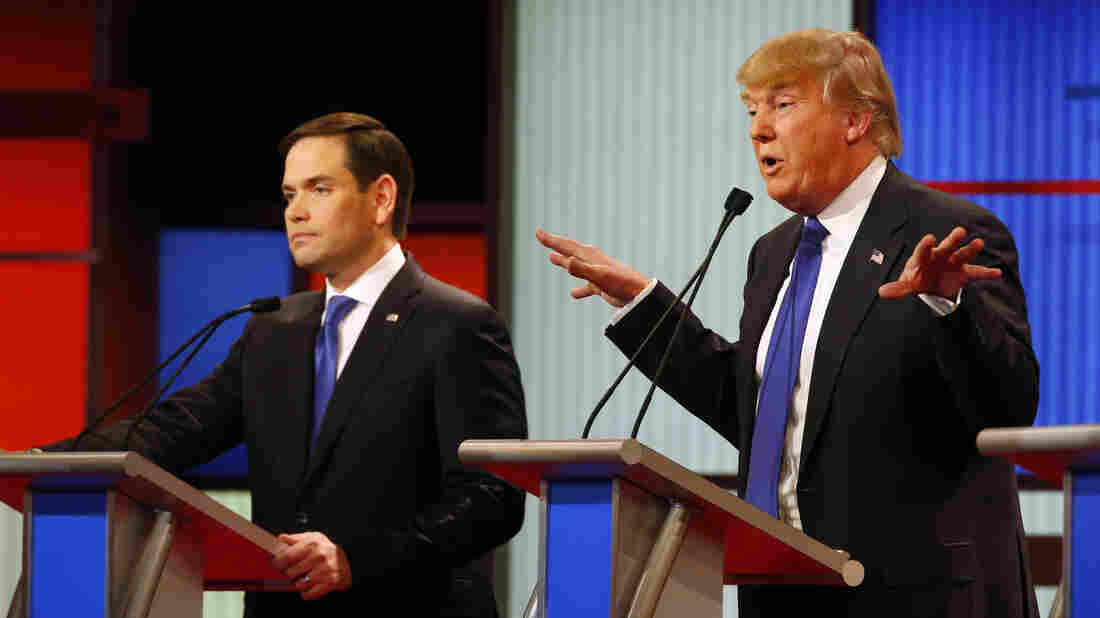 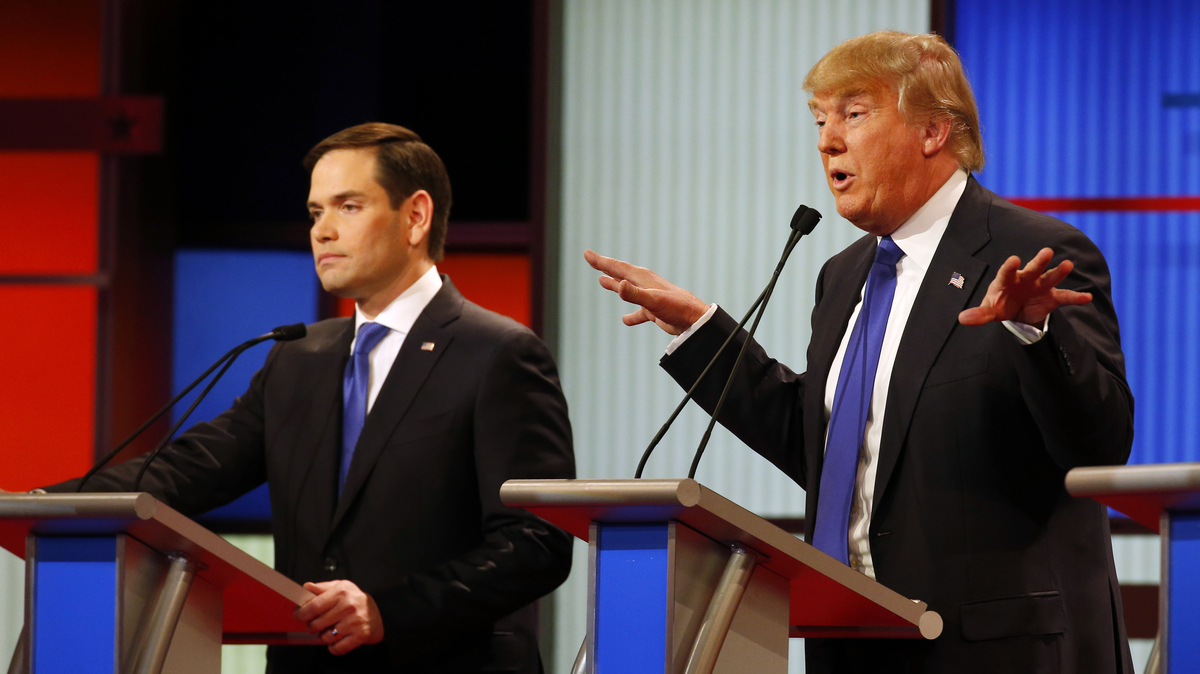 The 11th Republican presidential debate reached a fever pitch on Thursday, with Republican rivals piling on Donald Trump as he slung back vulgar insults.

With the race down to just four people, the remaining candidates turned their fire solely on Trump and not each other in the Fox News Channel debate in Detroit. Florida Sen. Marco Rubio and Texas Sen. Ted Cruz both hammered the real estate mogul on his immigration plans and some of his controversial business endeavors. Meanwhile, Ohio Gov. John Kasich stuck to a positive message as a way to distinguish himself in the winnowed field.

But Trump fought back in typical Trumpian fashion. He interrupted often and jabbed frequently at his rivals, including with a joke never before uttered in presidential debates.

Trump on his "small hands": "I guarantee you there's no problem"

Pressed by Fox News Channel moderators about the name-calling that has gone on between him and Rubio in recent days, Trump immediately took issue with a characterization that the Florida senator had made about Trump's "small hands," and Rubio's inference that another part of Trump's anatomy matched that scale.

"He referred to my hands — if they're small, then something else must be small. I guarantee you there is no problem. I guarantee you," Trump responded. His meaning was lost on no one.

While Trump apologized for referring to Rubio as a "lightweight" before, he kept knocking Rubio as "little Marco" in another not-so-veiled attack on the other man's size.

That set the tone for the rest of the evening, with Rubio and Cruz trying to take on Trump and stop him in any way, even as they declined to take hits against each other.

Trump was assailed on his positions on immigration, pressed by both the moderators and his rivals in the wake of a BuzzFeed report that he had told the New York Times in an off-the-record conversation that he was willing to moderate some of his hard-line positions.

"I'm not playing to anyone's fantasies," Trump argued. "The border is like a piece of Swiss cheese."

But he did strike a more conciliatory tone on the issue, admitting there has to be some give and take.

"I will say, though, in terms of immigration — and almost anything else — there always has to be some, you know, tug and pull and deal," Trump said. "Now, sometimes you ask for more than you want and you negotiate down to the point."

But in the very next sentence, he reiterated his usual promise to build a massive southern border wall and make Mexico pay for it.

Trump was also pressed on whether he had changed his mind on allowing more visas for highly skilled workers to come into the country. And he admitted that while he had once opposed that, he had evolved.

When he was also asked about his hard-line position on torture — promising to go beyond waterboarding and even target terrorists' families — he didn't back down and said military officials would follow his orders as president even though it could be illegal under international war crimes statutes.

"They're not going to refuse me. Believe me," Trump boasted confidently.

"I'm a leader. I'm a leader," he continued. "I've always been a leader. I've never had any problem leading people. If I say, 'do it,' they're going to do it. That's what leadership is all about."

The two top men vying to be the anti-Trump candidate seemed to make a strategic decision to focus their fire solely on the GOP front-runner.

The two teamed up to press him on why he had hired foreign workers over Americans at his Palm Beach resort.

"You know, Marco's dad started as a bartender," Cruz said. "My dad started washing dishes, and yet, you know how many Americans wanted those jobs? Roughly 300 applied. Donald hired 17."

They pressed Trump over his controversial Trump University, a business seminar that's been under fire and is the subject of a New York lawsuit.

"They signed up for this course because they believed Mr. Trump was this fantastic businessman, that Donald is going to teach them the tricks of the trade," Rubio said. "And you know what they got in these courses? Stuff you can pull off of Zillow. When they finally realized what a scam it was, they asked for their money back."

"If we nominate Donald, we're going to spend the spring, the fall and the summer with the Republican nominee facing a fraud trial," Cruz chimed in.

"It's a minor civil case," Trump interjected as Cruz had clearly gotten under his skin.

When infighting erupted again during the debate over Trump's position on guns (he once supported a ban on assault weapons but now says he opposes it), Cruz jumped in, saying, "Donald has a tenuous relationship with the truth."

That gave Rubio an opening for another laugh line: "When they're done with the yoga, can I answer a question?"

As the debate ended, the two could be seen fist-bumping on stage.

Kasich tries to be the adult in the room

The Ohio governor seemed overshadowed on the stage for most of the night, though per NPR's count he still eclipsed Rubio in talking time. But while Rubio and Cruz went hard against Trump, Kasich passed repeatedly on taking any direct hits at the front-runner.

"I'm not biting," Kasich responded when asked to comment whether Trump was "naive" about the threats from Russia and Vladimir Putin.

Kasich's argument, even as Trump ticked off his dominance in GOP polls, was that he would be the strongest challenger to either possible Democratic presidential nominee.

"As the Democrats tell me all the time, I can get the crossover votes," he argued. "You see, because throughout this campaign I've talked about issues, I have never tried to go and get into these scrums that we're seeing here on the stage. And people say everywhere I go, 'You seem to be the adult on the stage.' "

But unfortunately for Kasich — who needs wins in Michigan and his native Ohio in upcoming primaries — those points were probably muddied in all the mudslinging of his rivals.

#NeverTrump? Not for GOP candidates

Attempts to upend the front-runner have reached a new urgency in the days since this week's Super Tuesday primaries and caucuses. 2012 GOP presidential nominee Mitt Romney blasted the real estate mogul as a "phony" and a "fraud" in a speech earlier Thursday. Many party leaders and elected officials have pledged in recent days not to support Trump — causing the #NeverTrump hashtag to trend — if he does secure the party's nomination. Several pointed to remarks Trump made over the weekend in which he didn't immediately disavow support from a former leader of the Ku Klux Klan.

But none of that mattered in this debate, even as candidates spent two hours piling on Trump. In the final question of the evening, one by one each admitted they would support Trump if he is the GOP nominee.

"Yes, because I gave my word that I would," Cruz said, pledging his support to a man who called him "Lyin' Ted" throughout the evening.

"Yeah. But I kind of think that, before it's all said and done, I'll be the nominee," Kasich, who's polling fourth, said optimistically.

Trump, in turn, also pledged to support the nominee, whoever it may be. Though he seemed to find the notion it would be someone else preposterous.