Accessibility links
Why Would Trump's GOP Critics Back Him As Nominee? Marco Rubio says it's time for people to stand up against Donald Trump. Yet the senator says he will stand by Trump if he is the eventual nominee. Why? Teddy Roosevelt's career may offer a clue. 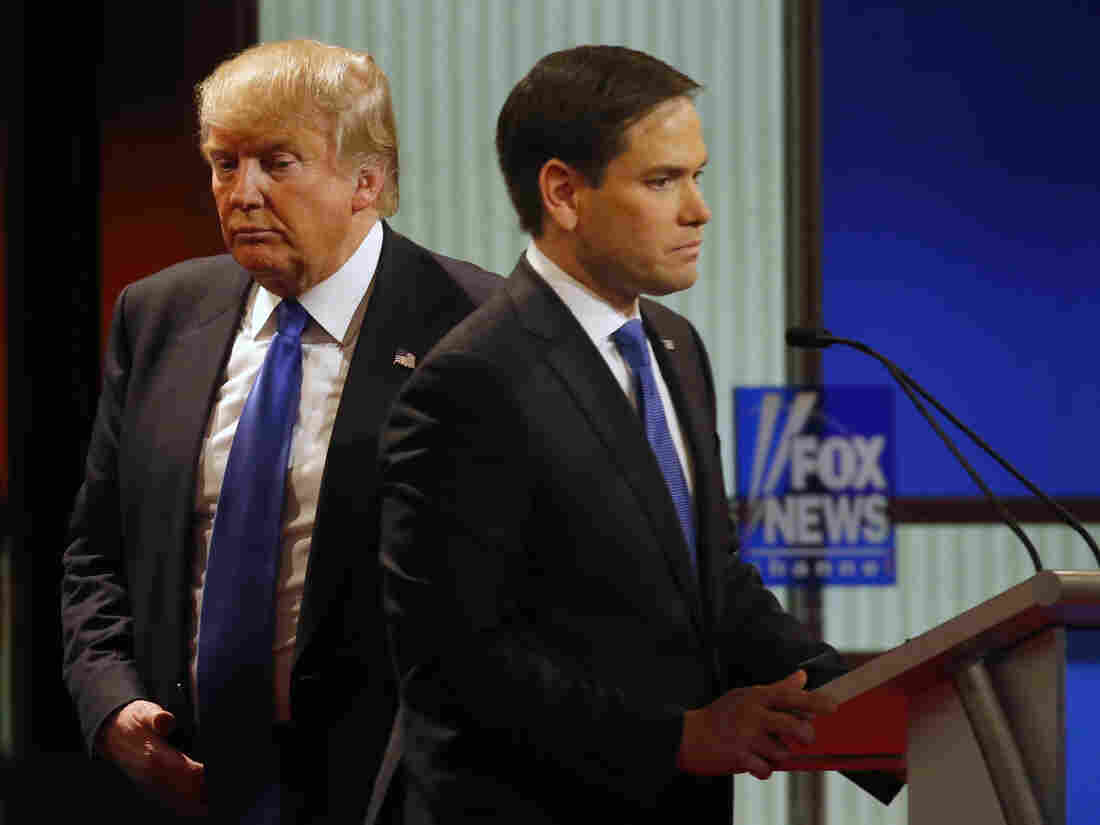 Donald Trump passes behind Marco Rubio during a commercial break in Thursday's Republican presidential primary debate at Fox Theatre in Detroit. All of the candidates Thursday said they would stand behind Trump if he is the eventual GOP nominee. Paul Sancya/AP hide caption 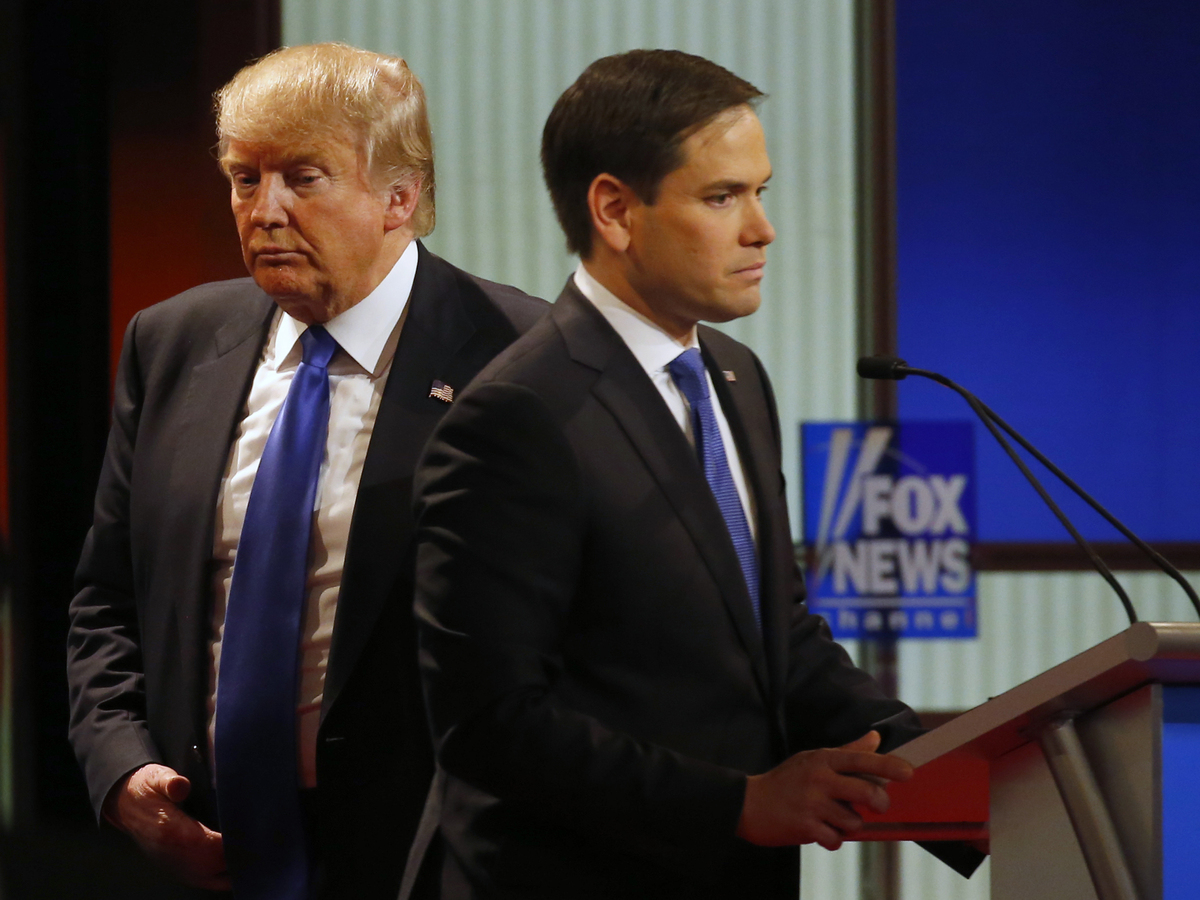 Donald Trump passes behind Marco Rubio during a commercial break in Thursday's Republican presidential primary debate at Fox Theatre in Detroit. All of the candidates Thursday said they would stand behind Trump if he is the eventual GOP nominee.

Republican Sen. Marco Rubio says Donald Trump is a "con artist" who ripped off ordinary people and now wants to steal "our country."

The Florida senator also said, in a debate Thursday night, along with all of his rivals, that he will support Trump if the businessman wins the Republican nomination.

How could both statements possibly be true? As an answer, we have Rubio's somber explanation, and also an example from history.

"You've just described the quandary that we're in," Rubio told me Friday on Morning Edition. "I think Hillary Clinton's a danger to our country, too. ... Hillary Clinton is so bad," he said, that he would vote for Trump to oppose her.

The question still lingers. There have been cases of professional politicians bolting their party over a nominee they considered unacceptable; the most spectacular example came in 1912. Former President Theodore Roosevelt turned against his fellow Republican, incumbent President William Howard Taft, and ran under the banner of his own, new party. Roosevelt and Taft split the GOP vote, which wrecked them both and led to the election of Democrat Woodrow Wilson.

Why wouldn't Rubio, Texas Sen. Ted Cruz or Ohio Gov. John Kasich threaten to do that? An answer may lie in the logic of political tribalism. We can see that logic at work in an incident earlier in Roosevelt's career. 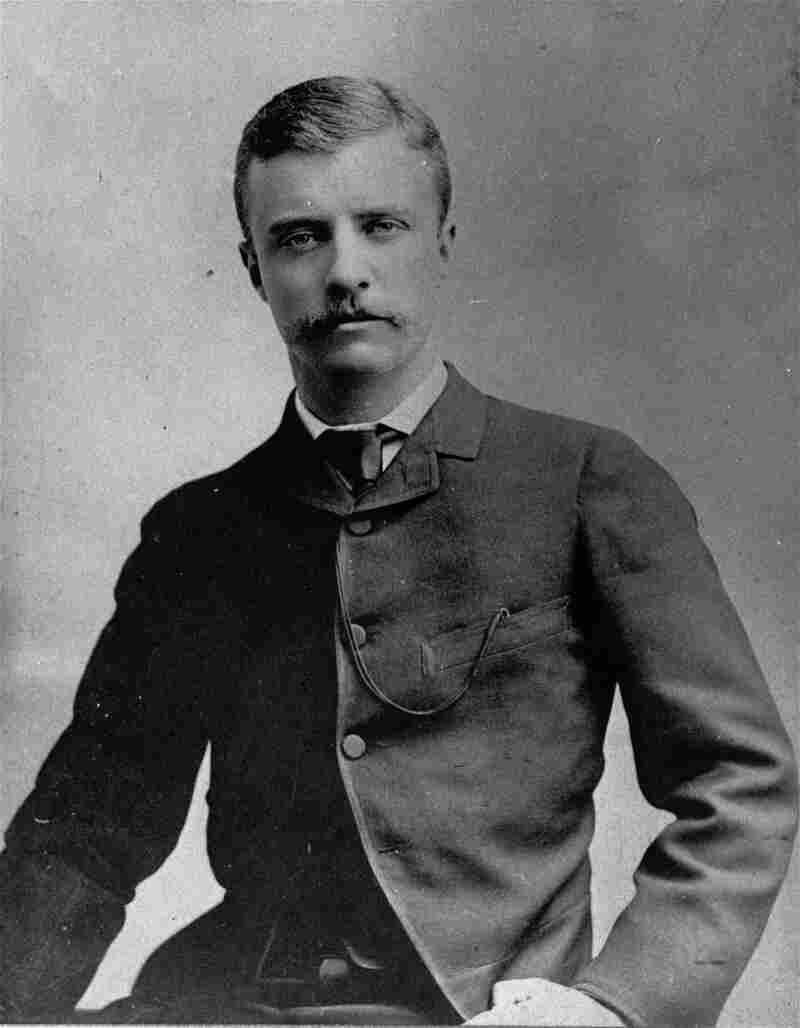 Theodore Roosevelt is shown in this 1882 photo. In his mid-20s, the Republican was already a prominent figure in the New York state Legislature and wanted to reform his party. AP hide caption 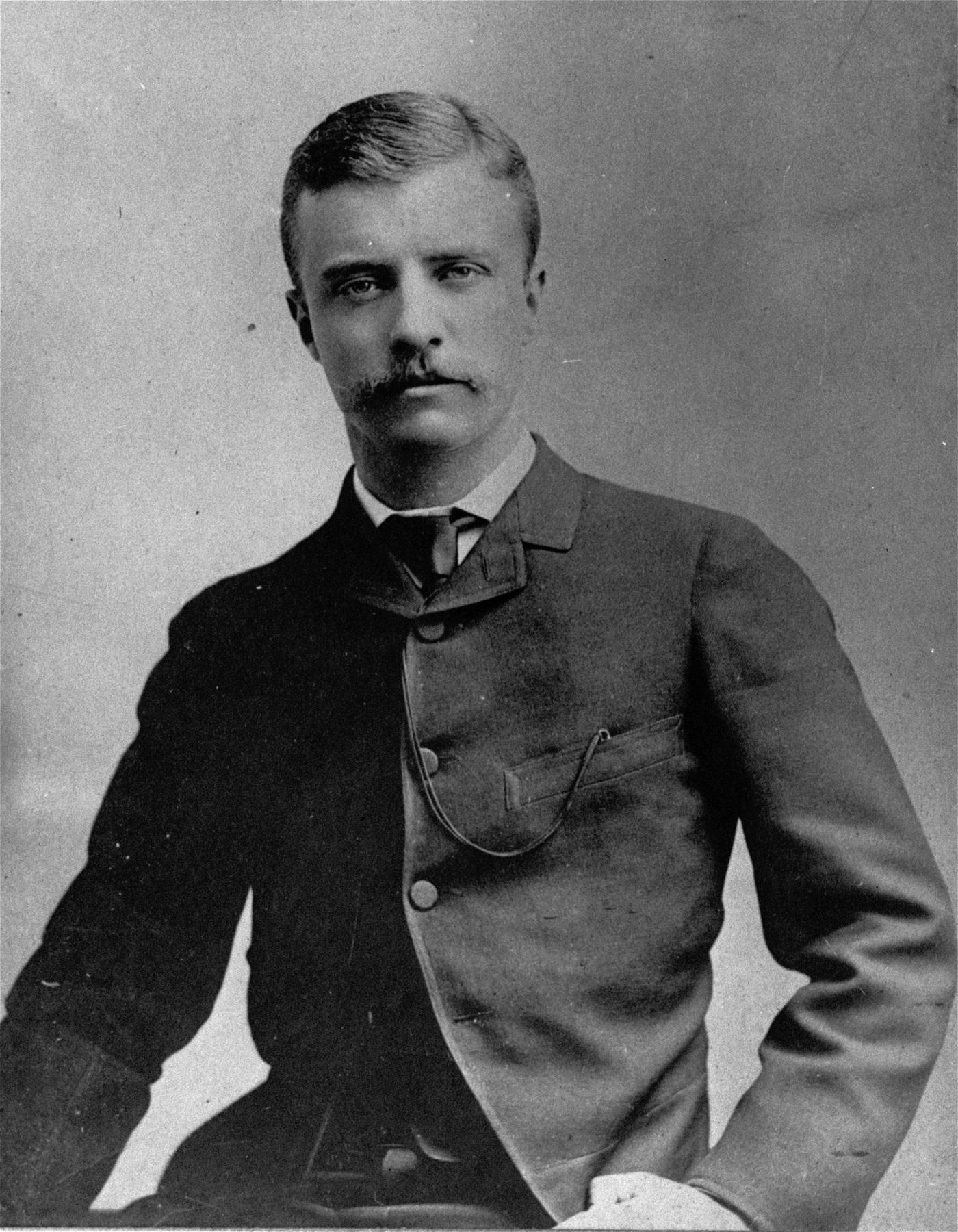 Theodore Roosevelt is shown in this 1882 photo. In his mid-20s, the Republican was already a prominent figure in the New York state Legislature and wanted to reform his party.

In 1884, Roosevelt was a rising young Republican politician. He was only in his mid-20s, but already a prominent figure in the New York State Legislature. He wanted to reform his party, which had grown corrupt in the Gilded Age.

Roosevelt resolved that he must block the man who was in line for the Republican nomination — James G. Blaine of Maine. Blaine was a symbol of the corrupt Republican old guard and was widely believed to have personally profited from his work as speaker of the House.

Young Roosevelt and his allies failed to stop Blaine, who was nominated at the GOP convention in 1884. Roosevelt was horrified. Afterward he wrote: "It may be that the voice of the people is the voice of God in fifty-one cases out of a hundred," but otherwise it might be "the voice of the devil" or of "a fool." Roosevelt even told a reporter in private that "any proper Democratic nominee will have our hearty support."

Yet a few weeks later, Roosevelt said he would support Blaine after all. "I have been called a reformer, but I am a Republican," he said.

Why? Roosevelt biographer Henry F. Pringle wrote: "Certainly no young man beginning a political career ever found himself in a sadder position than Roosevelt in June, 1884." Pringle concluded that Roosevelt had acted out of personal pragmatism: Had he bolted his party, he would have destroyed his own career. Democrats would have welcomed him for as long as he was useful to them, but afterward would drop him, and "he would have been the saddest of public figures, a politician without a party." His great career would have been stunted.

Roosevelt, of course, never admitted that he was bending his principles for ambition. Instead he convinced himself that the Democrat, Grover Cleveland, was even more corrupt than Blaine, and he campaigned for the Republican ticket on those grounds.

There may have been a still deeper reason, though. Blaine, on reflection, was deeply flawed but not a genuine threat to the nation or to democracy itself. He was a capable politician who did not seem likely to disrupt much of anything if elected. In any case, he lost the election and never became president, as the canny Roosevelt probably foresaw.

Is The Republican Party On The Verge Of A Historic Crackup?

A more agonizing choice exists for today's Republicans, some of whom have begun arguing that Trump is not merely a bad candidate but an actual danger to their party, to democracy and to the stability of the nation. The more they accept the harshest case against Trump, the harder it will be to explain their loyal support.

Roosevelt's 1884 tale nevertheless offers some insight. It also makes it striking that a few prominent Republicans have vowed never to vote for Trump. They include not only party grandees, but also Sen. Ben Sasse of Nebraska. He is comparatively young for a senator; at age 44, he is around the same age as Rubio and Cruz, and he was just elected to the Senate in 2014. He has declared that Trump's "relentless focus is on dividing Americans, and on tearing down rather than building back up this glorious nation," and says he would never vote for him. Sasse accused Trump of a "creepy" desire for the power of a king.

Sasse, like young Theodore Roosevelt, may well have a long career ahead of him. His choice could plausibly put his career at risk — the same risk Roosevelt once dodged. Or he could end up writing new rules for the tribal game that is politics.