Accessibility links
Ben Carson Ends Presidential Campaign "Even though I might be leaving the campaign trail, you know, there's a lot of people who love me, they just won't vote for me, but it's OK!" he told the CPAC crowd. 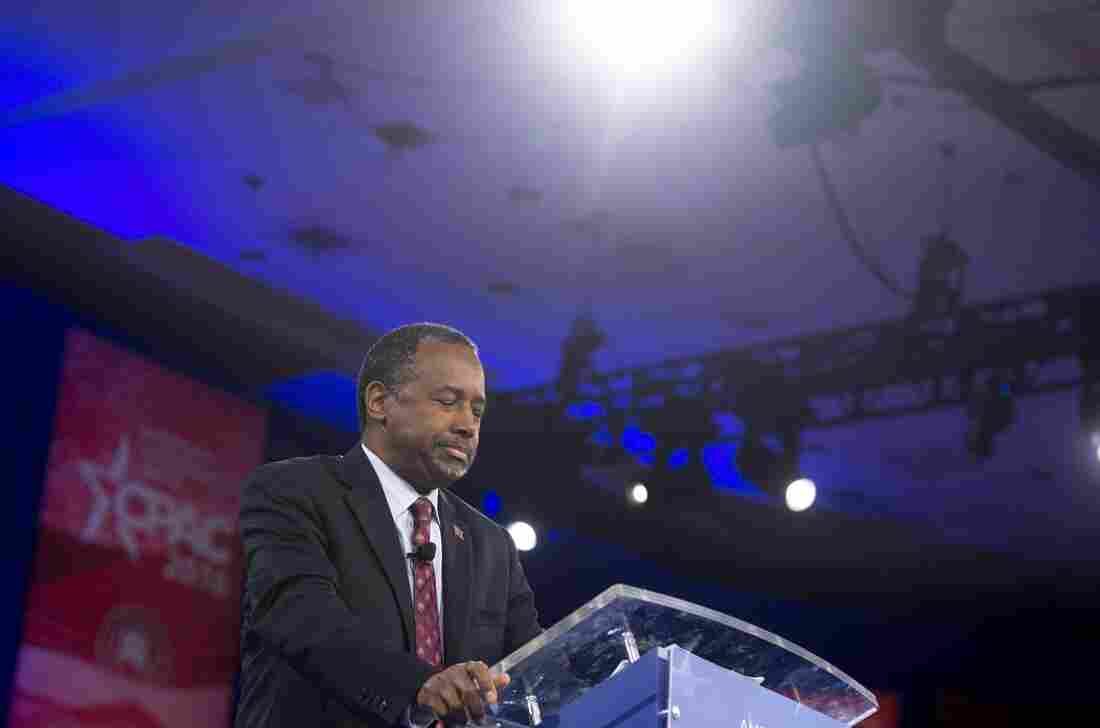 Republican Ben Carson confirmed during his speech at the annual Conservative Political Action Conference that he is ending his bid for the White House.

The famed neurosurgeon had implied he was dropping out on Wednesday after a disappointing Super Tuesday finish, and he skipped Thursday night's debate in his hometown of Detroit.

But it took him more than 10 minutes into his meandering speech to a packed CPAC crowd to actually say the words — sort of.

"Even though I might be leaving the campaign trail, you know, there's a lot of people who love me, they just won't vote for me, but it's OK!" Carson said as the crowd gave him a standing ovation. "But I will still continue to be heavily involved in trying to save our nation."

He confirmed reports that he will be joining My Faith Votes, an effort to get more evangelical voters to the polls this fall.

Carson, the only African-American candidate in the GOP field, had risen to fame after a viral 2013 speech at the National Prayer Breakfast that criticized Obama, who was just feet away from him.

He surged last fall after getting in the race and even led polls in Iowa at one point. But after terrorist attacks turned many voters' focus back to foreign policy, his stumbles and inexperience on the issue were magnified. Carson began to tumble and never recovered.

On Friday, he acknowledged as he did in a statement earlier this week that there simply was not a path forward for him.

"I did the math; I looked at the delegate count, looked at the states, and looked at the requirements. I realized it simply wasn't going to happen and if that's the case, I didn't want to interfere with the process," Carson said.

While he didn't throw his support behind any of the remaining candidates in the race, he did outline the type of candidate he was looking for — someone with a record of accomplishment, who treats his family well and has the right ethics and policies.

"What we must do as conservatives is we couple conservative with compassion," Carson said. "We the people have to be the ones who really push these things."