Accessibility links
4 Super Saturday Takeaways: Ted Cruz Rises Toward Donald Trump As Two-Way Race Takes Shape Politically speaking, it was a good night for Cruz, as he won convincing victories in Kansas and Maine, while Trump struggled to eke out victories over Cruz in Kentucky and Louisiana. 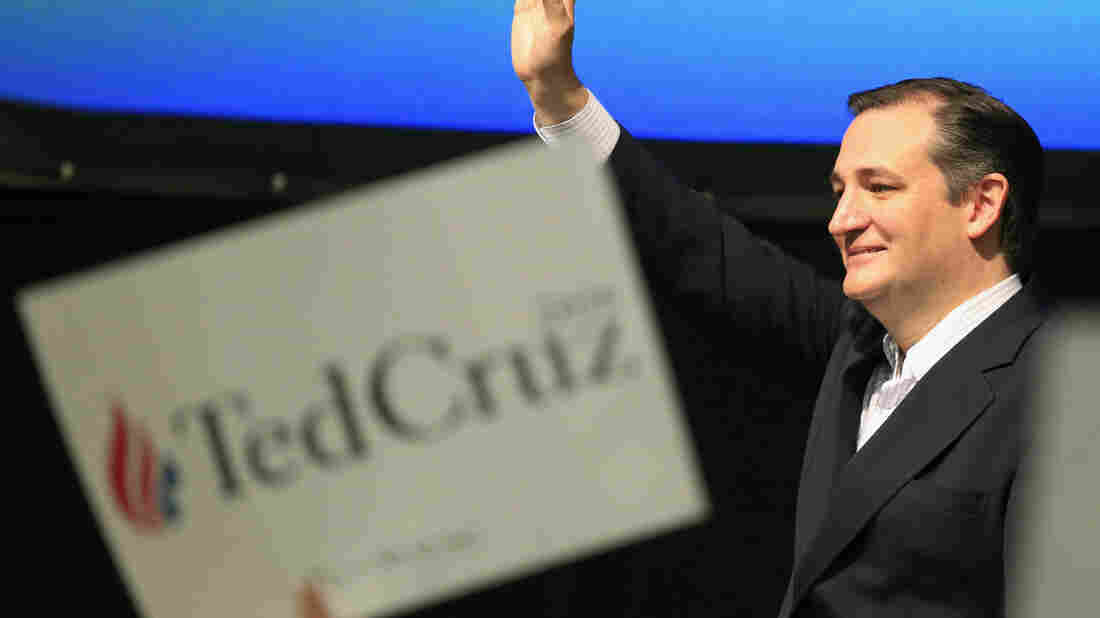 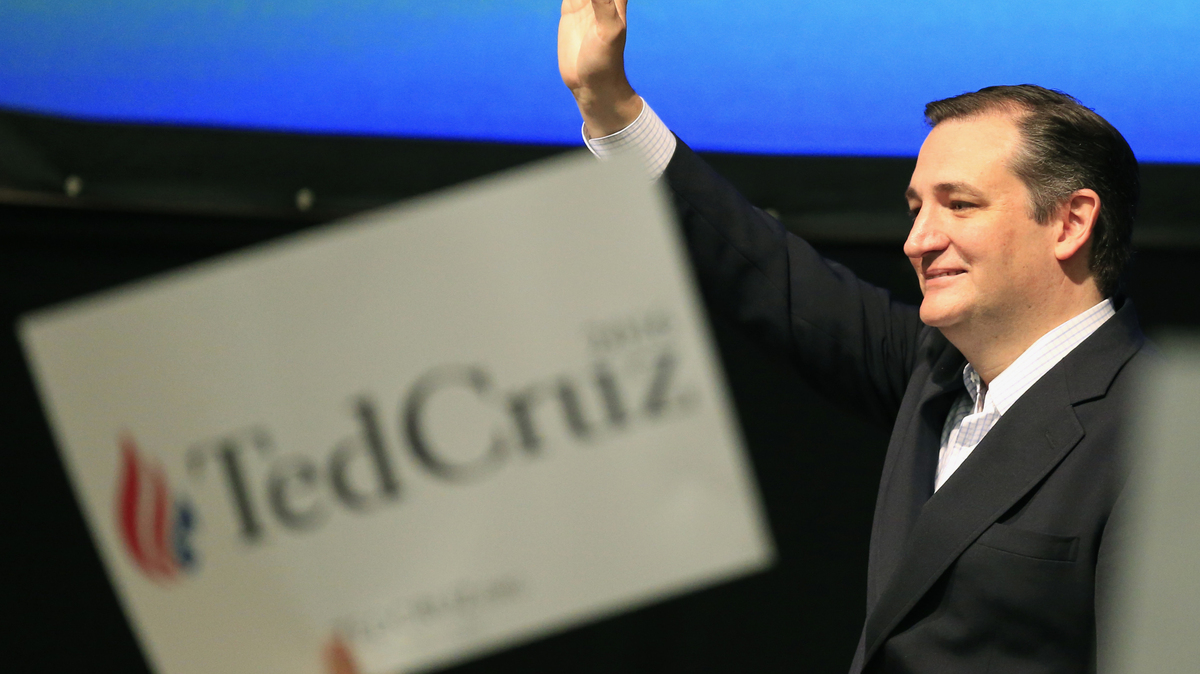 Republican presidential candidate, Sen. Ted Cruz, R-Texas waves to the crowd at the GOP caucus in Wichita, Kan., on Saturday.

On the surface, Saturday's election results appeared divided. After all, on the GOP side Ted Cruz and Donald Trump each won two contests, while among Democrats it was Bernie Sanders who won two of the night's contests as Hillary Clinton netted one victory.

But in the march toward the nomination, delegates are the name of the game, and both the Texas senator and the former secretary of state emerged with more of them on Saturday, thanks to their margins of victory.

For Republicans, Cruz's decisive wins were a signal he's the one with the momentum in the GOP field, while the other challengers to try and topple Trump are fading.

And among Democrats, Sanders looks toward Michigan on Tuesday night and upcoming contests to try and catch Clinton in the delegate math.

Here are four things we learned from the "Super Saturday" contests in five states.

Politically speaking, it was a good night for Cruz, as he won convincing victories in Kansas and Maine, while Trump struggled to eke out victories over Cruz in Kentucky and Louisiana. Ultimately, Cruz came away with more delegates tonight than Trump, adding 64 to his total while the real estate mogul picked up 49 delegates.

In Louisiana especially, a bad week of news for Trump seemed to have an impact. As FiveThirtyEight's Nate Silver noted, Trump won early voting in the Bayou State, but Cruz edged out Trump to win election day voters, and the state because a much closer contest throughout the night.

Cruz's momentum is thanks in large part to reliable Republican voters. Each contest on Saturday was a closed primary or caucus, meaning only registered GOP voters could participate. That robbed Trump of independents and crossover voters, which past exit polls showed he did well with. As Cruz continues to make the case he runs the strongest with the most reliable GOP voters and hardline conservatives, he has more arsenal for that argument.

Rubio has got to put points on the board soon

It becomes harder and harder for the Florida senator to argue he's the best candidate to topple Trump when he has still only netted one statewide victory (Minnesota on Super Tuesday).

On Saturday especially, the results for Rubio were bad. In Maine and Louisiana he failed to even clear the threshold to get any delegates, and in Maine he finished fourth behind Ohio Gov. John Kasich. Now, Cruz has climbed to a more than two-to-one advantage over Rubio in the total delegate race.

Rubio spokesman Alex Conant argued on Fox News Saturday that Rubio will win his home state of Florida on March 15, and the trajectory will change: "After we win the Florida primary, the map, the momentum and the money is going to be on our side."

But until Rubio starts putting actual W's on the board and starts cutting into the delegate advantage both Trump and Cruz have built, it's a hard argument to make. Such logic does raise the stakes even more for Rubio in Florida, where he's no lock to win. Trump still leads polls in the state, and Cruz indicated this week he's not ceding the Sunshine State either.

The path for Kasich, too, still looks narrower and narrower. After all, he still hasn't won a single state outright. He netted just 34 total delegates in the GOP race. If he doesn't have a strong showing Tuesday in Michigan, the drumbeat for him to get out even before his home state of Ohio votes on March 15 will grow.

Super Saturday brought super turnout for Republicans once again. In all four states Saturday, Republicans beat 2012 and 2008 turnout – and by a lot, more than double in Kansas, nearly double in Louisiana, triple in the smaller caucus in Maine. That means that in every contest, except one (Vermont), Republicans have seen increased turnout from recent years.

Democrats, on the other hand, had a mixed night when it comes to turnout. Louisiana was off by 70,000 votes from 2008, Nebraska was way down, too, but the Kansas caucuses were up marginally.

That trajectory doesn't guarantee success for Republicans in the fall. But in closed contests on Saturday where only GOP voters could come out — and crossover voters weren't a factor, the heavy turnout just bolsters the argument that Republicans are the beneficiary of an enthusiasm gap heading into November.

The patterns for Democrats continue to hold true. Bernie Sanders was able to win in smaller caucuses in states with whiter populations, while Clinton ran up a big margin in a state with a heavy black Democratic population. And, as usual, she winds up with the most delegates out of tonight because of that big win in Louisiana.

All of it is a wind up to Michigan on Tuesday, which has a more mixed population. Sanders hopes to breakthrough with Northern blacks in a place his economic message should resonate with whites as well. But if his message doesn't break through in Michigan, it could only be a matter of time before Clinton is mathematically, officially the nominee.