Accessibility links
How To Keep Money From Messing Up Your Marriage Finances are among the things most likely to cause discord in a relationship, whether you're just starting out or have been together for years. Here are some ways to avoid common conflicts. 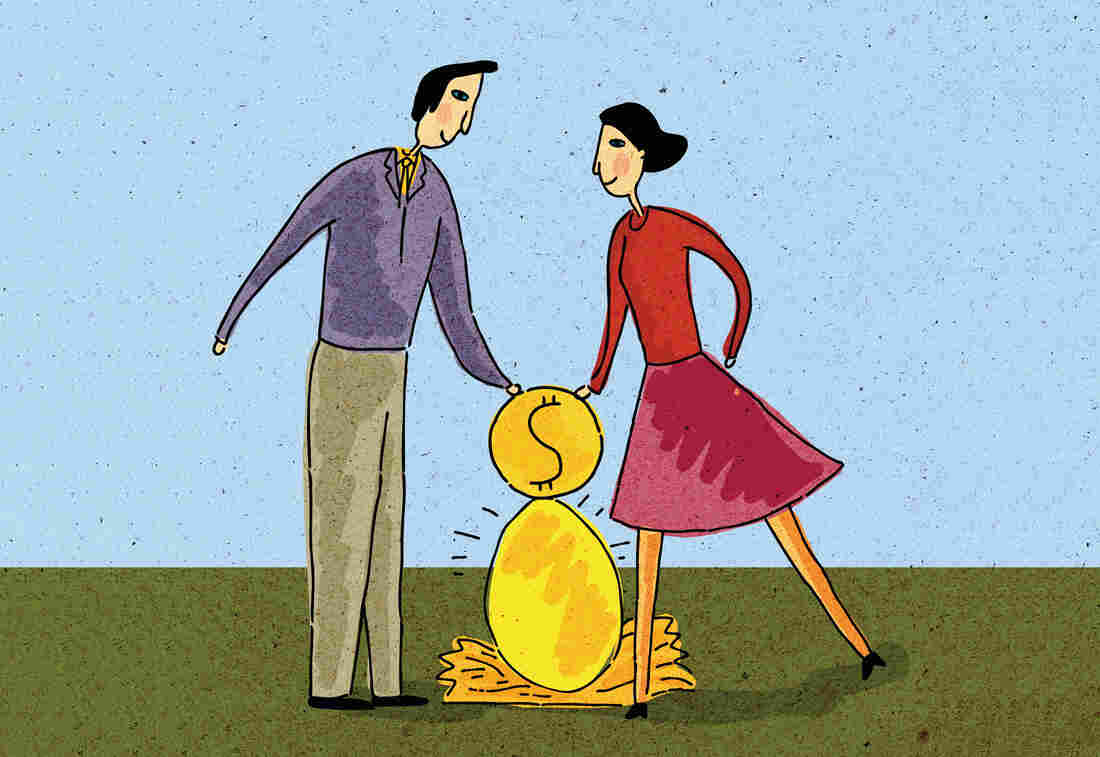 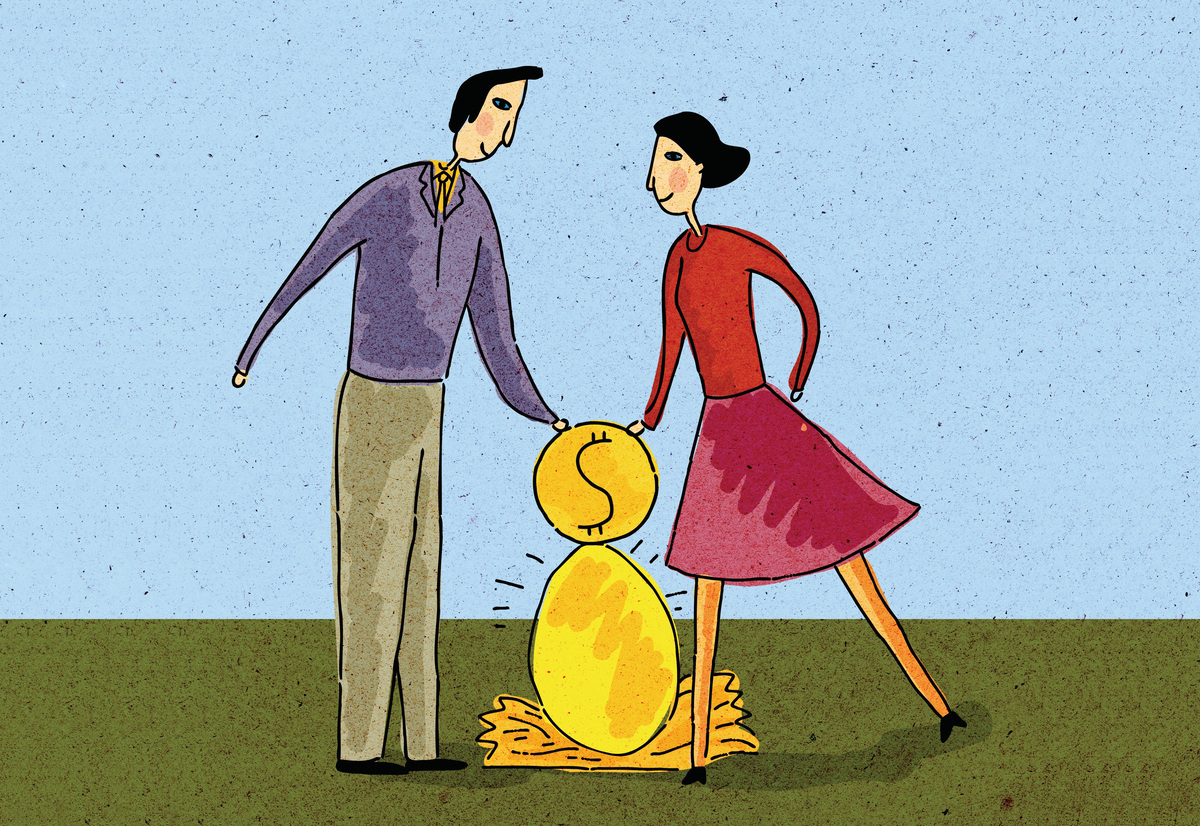 Mary Fusillo and her husband, Bob, have been married for 20 years. She met him on a blind date in Houston. Right away, she knew she liked him.

He was very intellectual, and he "read jazz biographies of dead jazz musicians," she says, laughing.

"And I was used to guys that went hunting on the weekends," she adds.

They fell in love and got married. Pretty soon they had a house and kids — twins, actually.

But within a few years, there was trouble.

"He was a good husband," Fusillo, now in her mid-50s, says with absolute conviction. "He's always done all the cooking, which is great."

He gave the kids baths and did household chores. So what was the trouble?

What Married People Fight About Most

A study based on a 15-day reporting period by 100 married couples found these were the most frequent sources of marital conflict. While money wasn't the No. 1 most common source of conflict, the study found it was often the most difficult to resolve.

Source: For Richer, for Poorer: Money as a Topic of Marital Conflict in the Home by Lauren M. Papp, E. Mark Cummings and Marcie C. Goeke-Morey

"The money thing always made us crazy," Fusillo says.

At the time, Fusillo says, she was working fewer hours to juggle her job with taking care of the kids. She was a nurse; he was a chemical engineer.

Her husband was making more money than she was, but they were splitting their expenses down the middle.

So after her share of the child care, groceries and bills, Fusillo says, she was feeling pretty broke much of the time.

"It would be a week before payday and I would have like 20 bucks," she says. "And I would go to my dad and say, 'Can I have a hundred dollars?' and my dad would be like, 'Well, what's up?' " she re-enacts his one-eyebrow-raised question. "I'd say, 'Please just give me a hundred bucks,' " she says. "It was bad."

Oftentimes one spouse doesn't realize how big an issue money is becoming for the other person. Fusillo says that's what was going on with her husband.

They weren't having money arguments per se. But over time, Fusillo got increasingly frustrated about it — to the point where she says she's surprised they didn't get divorced, "because I had such overwhelming resentment."

Why It's So Hard To Talk About Money

Disagreements about money are one of the most difficult conflicts for people in relationships to resolve. There's little instruction in how to manage our finances with a spouse or partner. And if you do it wrong, it can mess everything up.

Tips From An Economist

Kent Smetters is a professor of economics at the University of Pennsylvania's Wharton School.

"We know that these discussions or conflicts concerning money are difficult for couples to handle," says Lauren Papp, a psychologist and professor at the University of Wisconsin, Madison.

Papp conducted a study of 100 married couples who kept diary entries about their arguments. During the 15-day period of the study, the spouses reported squabbling more often about issues other than money — for example, the kids or household chores.

But Papp found that money can be one of the most difficult and damaging areas of conflict. Part of the problem is that it's very difficult for couples to talk about money issues and resolve them, "and partners walk away from these discussions learning this is an issue we can't handle, I feel very frustrated, I feel very devalued by my partner," Papp says.

That's because so much is wrapped up in money, she says — who's making more of it, who's sacrificed their work life more to take care of the kids, "feelings about our self-worth, how much we're contributing, how much we've accomplished."

So What's A Couple To Do?

Kitty Bressington is a financial adviser in Rochester, N.Y., who specializes in helping couples. First, she says, you need to "get all of the issues out on the table, work through a budget." That means coming to some agreement on "yours, mine, ours." Couples often need to set spending limits.

"Those all come from being able to talk about money, which as a society we're not very good at," Bressington says.

Keeping all your money separate is probably the wrong approach, Bressington says, but she also doesn't think it's a good idea for a couple to just throw all their money together in one account and hope for the best.

The exact structure depends on the particular couple. But she recommends the following as a good way to organize your finances:

"If you decide [the fun money is], say, $250 a month, and that fits within your budget, and one person wants to blow his $250 and the other person wants to save her $250, then that's OK because you've set those ground rules," Bressington says.

She advises many couples to take out that spending money in cash — no credit cards.

"We're tactile," she says. "Sometimes I need to put people back in touch with a dollar bill."

Also, many experts say if you go to a financial adviser, pick one who works for a simple "fee only" (an actual, legally binding designation) — unlike many who make commissions steering you into pricey mutual funds.

As for Mary Fusillo, she and her husband eventually did figure out a better system. Now she's pretty much in charge of managing their finances. It's something he didn't like to do anyway, she says. And that, she says, changed their relationship completely.

"He still makes more money than I do," she says, "but we're a team about it."

And that's a very good place to be.