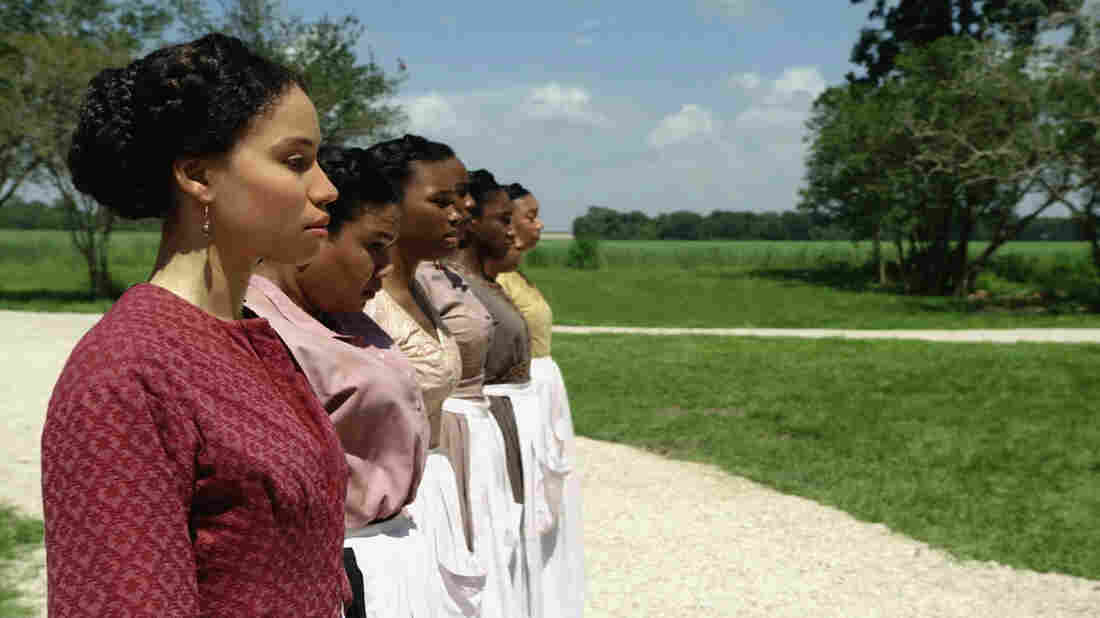 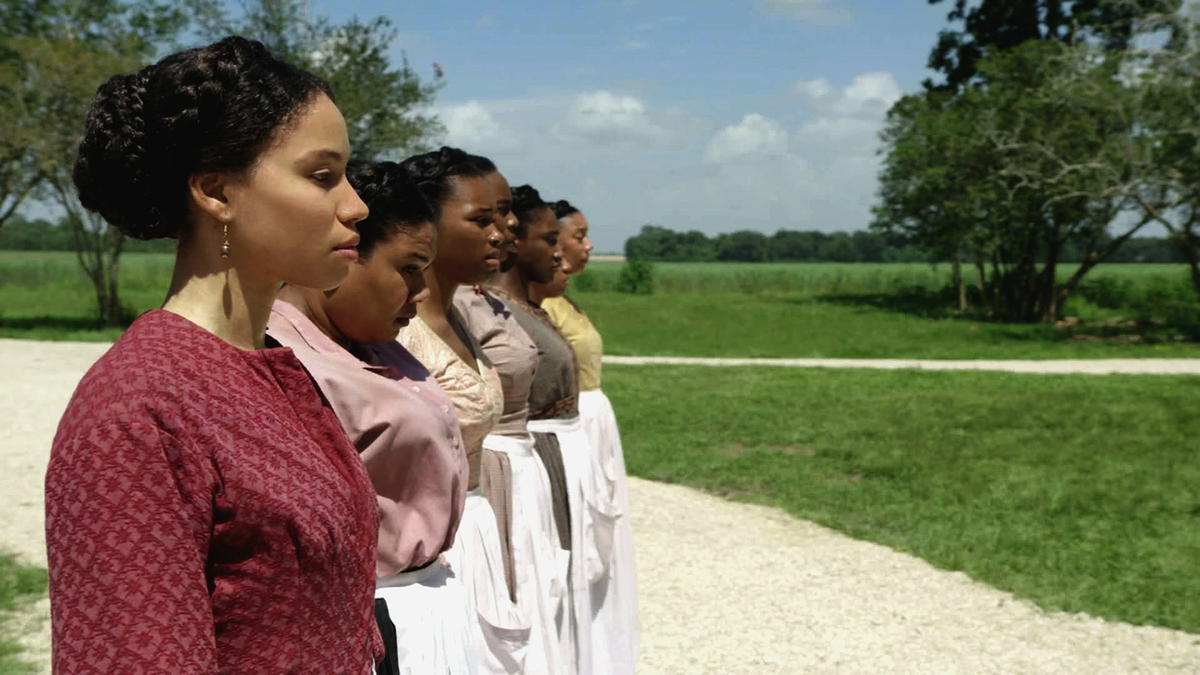 Actress Jurnee Smollett-Bell plays Rosalee, a housemaid who runs for freedom in the new WGN show Underground. She says the drama unfolds like a spy thriller.

Visiting the set of a historical drama can be a surreal experience, and Underground was no exception.

As the Louisiana sun beat down on an actual historical plantation near Baton Rouge last July, director Kate Woods oversaw a scene where an adorable small boy — actor Maceo Smedley — is picking cotton.

"Could someone go and put more blood on his hands?" she shouted.

The second the filming stopped, someone dashed over with an umbrella to protect the 8-year-old from the stultifying heat, while the extras playing female field workers pulled bottles of Gatorade and cellphones from their 18th-century skirts.

Underground premieres on the basic cable channel WGN America tonight. It's the first major scripted drama taking the Underground Railroad as a setting. Enslaved people in the American South journeyed hundreds of miles to freedom, assisted by abolitionists, black and white. Given the drama of the actual history, it's almost hard to believe the Underground Railroad hasn't been a setting for a TV show before. (As it happens, NBC also planned a miniseries, called Freedom Run, last year, but it didn't pan out.)

Co-creators Misha Green and Joe Pokaski met while working as writers for the series Heroes, which ran for four seasons on NBC. It was Green's idea to draw on their shared love of comic books and action movies for a show that in some ways would be more 24 than Roots. They wanted to make it exciting and high-stakes, real and relevant. 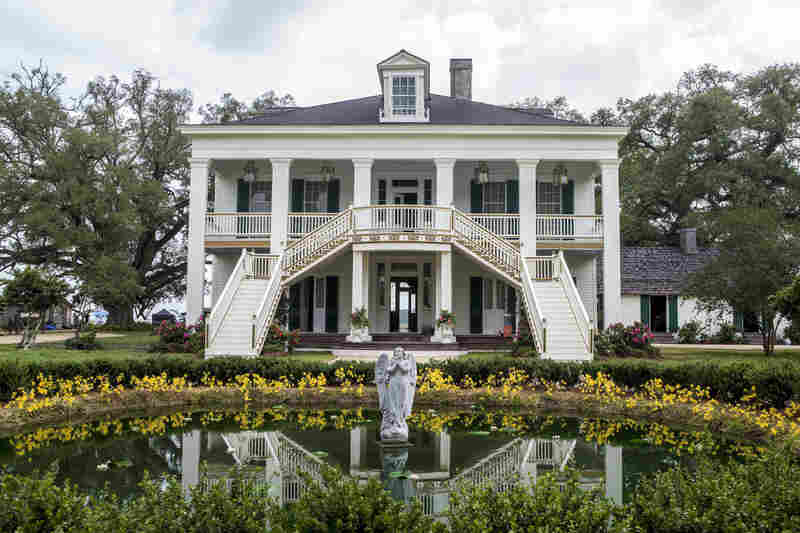 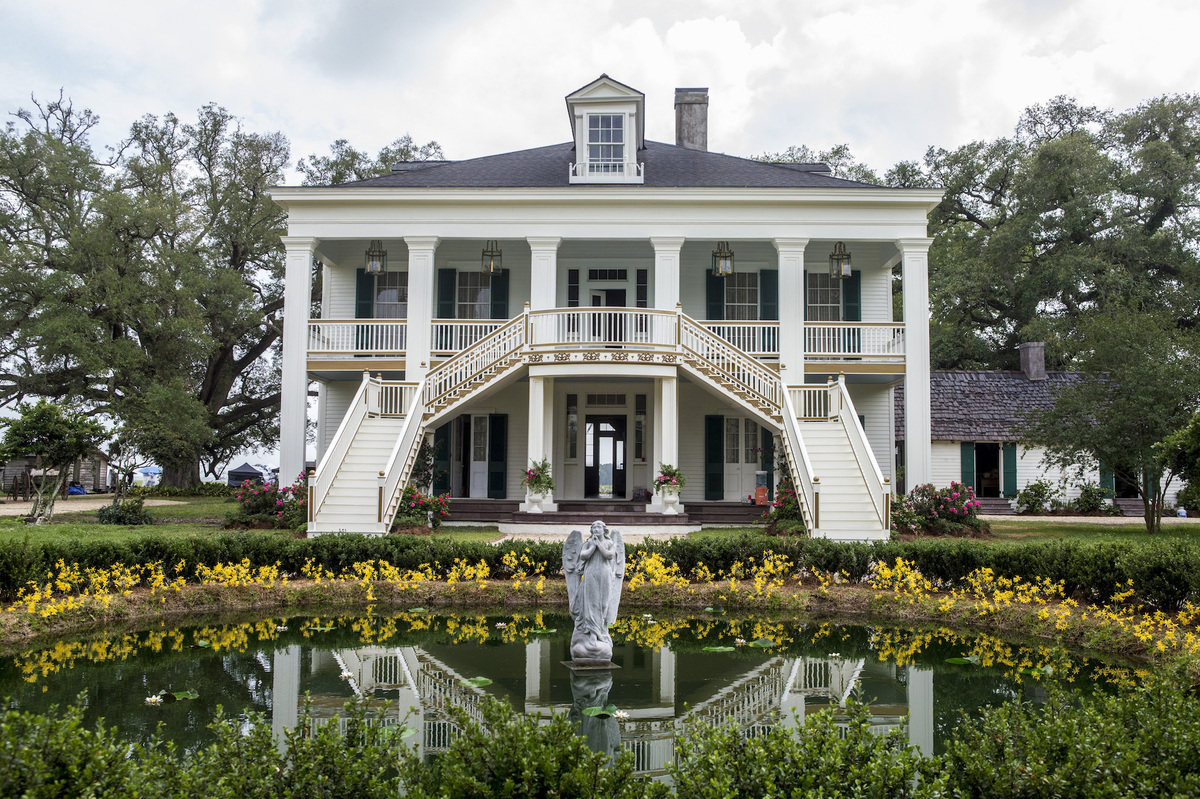 Underground was filmed in part at a historic sugarcane plantation in Louisiana.

Underground is, in the manner of Game of Thrones, a multilayered drama following different groups. Here: slave catchers, abolitionists, a plantation family in Georgia, the enslaved people forced to work there, and those who try to escape. Among them, a housemaid played by actress Jurnee Smollett-Bell. She compares Underground to spy thrillers where characters must rely on cryptic clues to make their way to freedom.

Other TV shows have dramatized American slavery — but not many. And such shows tend to be miniseries, not regularly scheduled dramas that could air for years. The great Roots, from 1977, was a miniseries. So was BET's critically acclaimed The Book of Negroes, from 2015. (Roots is scheduled for a remake this year.) The PBS series Mercy Street, which debuted this year, is set during the Civil War.

"But slavery is folded within it and not at all its center," writes Lisa Woolfork, a professor at the University of Virginia who studies representations of American slavery.

Woolfork says she's heard complaints about "slavery fatigue" since the success of high-profile movies such as 12 Years a Slave and Django Unchained. Writers Kara Brown in Jezebel and Demetria Lucas D'Oyley in The Root both recently wrote about it. Woolfork says she wholeheartedly understands wanting to put a shameful past behind us.

"We want to have it safely away so it doesn't impede on our everyday life," Woolfork says. "But one way to understand why our present is the way it is, is rooted in the past. As Faulkner said, 'The past is never dead. It isn't even past.' " 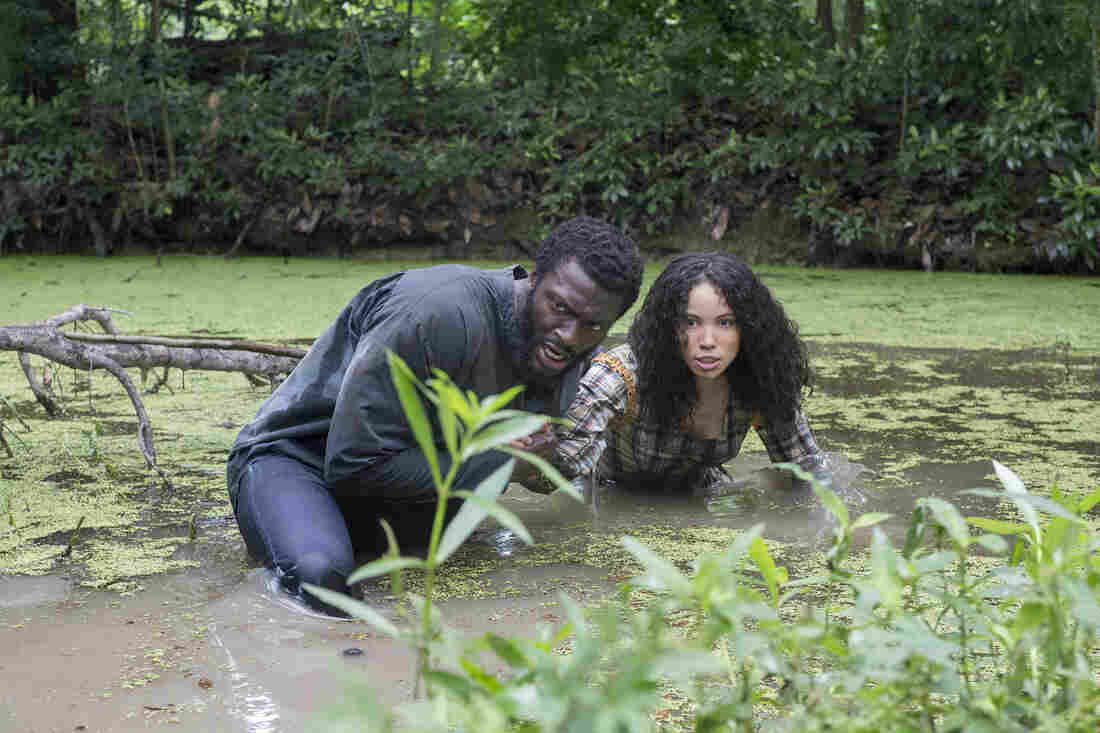 Aldis Hodge, pictured above with Jurnee Smollett-Bell, plays Noah, the leader of the underground resistance. He says the show's impact stays with him even after the cameras are off: "There's no way that you can come from set without taking a little piece of that with you," he says. Skip Bolen/Sony Pictures Television hide caption 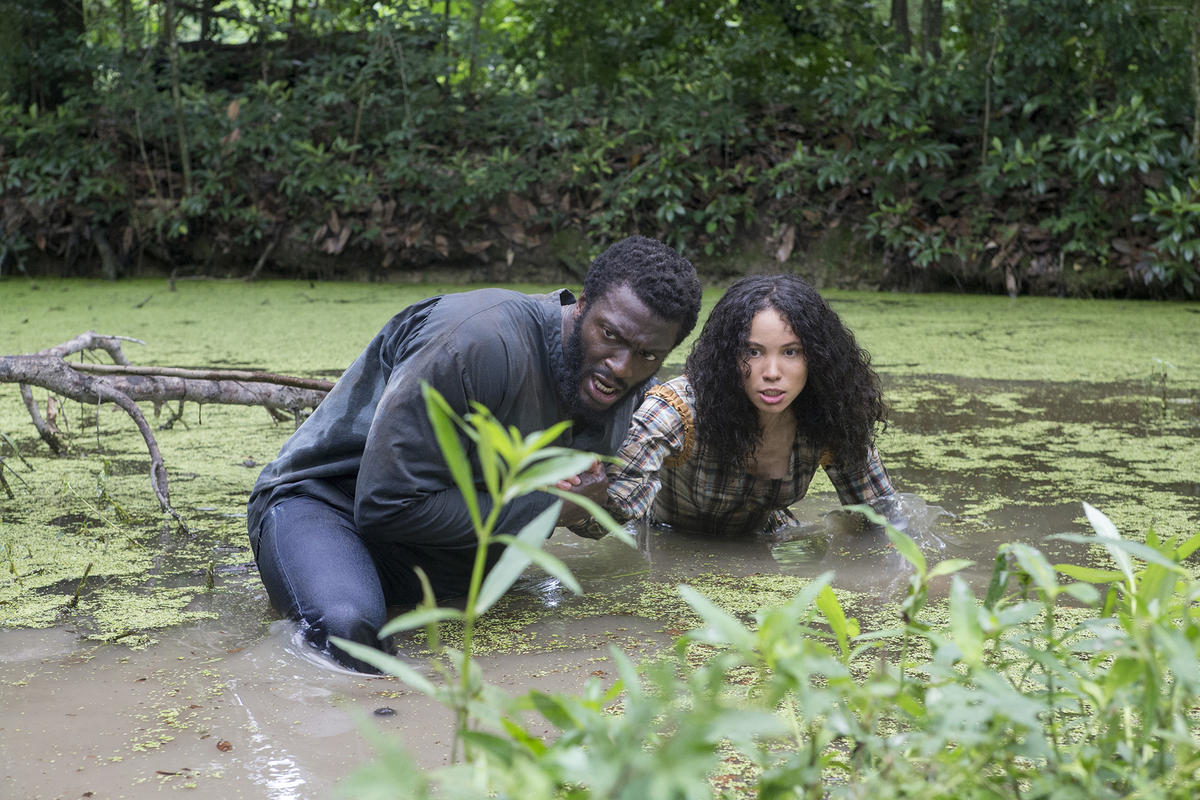 Aldis Hodge, pictured above with Jurnee Smollett-Bell, plays Noah, the leader of the underground resistance. He says the show's impact stays with him even after the cameras are off: "There's no way that you can come from set without taking a little piece of that with you," he says.

I hadn't yet talked to Woolfork when lead actor Aldis Hodge and production designer Meghan Rogers took me to Undeground's reconstructed slave quarters outside the Rural Life Museum at Louisiana State University — another exterior set. Seven wooden shacks were arranged around a vegetable garden, all authentic slave cabins from the 1830s that had been moved from another location.

"This was creepy sometimes," Rogers admitted.

Hodge says that sense of authenticity helped when he had to play very difficult scenes as the leader of the resistance. On one of the first days of shooting, he said, his character had to beg for his life on his knees after being caught.

"Those are the hard days," he said. "It hurts, and there's no way you can come from set without taking a little piece of that with you."

Filming Underground wasn't just emotionally draining for the actors. It was physically challenging. When Rogers created the set for the abolitionists' house, she built a secret passageways and a bunker where actors playing runaways had to crouch for hours.

"We play a lot of action of people standing on top of people hiding," she said. "You could see a slave catcher standing right on top of someone."

The production designer was incredibly attentive to tiny details and nuances. For example, she designed the dresses of the plantation housemaids to nearly fade into the wallpaper of the big house, so the women are almost like furniture. And she made the color yellow a motif — the color of freedom. It's the color of a ribbon carried by a runaway, and the color of the lanterns set in the window of the abolitionists' house as a signal.

"Throughout the entire show. I had somebody putting yellow flowers all over the place when they're on their journey," Rogers said. "It's echoing the color of the lantern, the light of the lantern."

It's fair to say that nothing in Underground is sepia-toned. The music is contemporary, and so is much of the language. Co-creator Misha Green said she aimed to pull American history off the wall of the proverbial museum.

"The Underground Railroad was the first integrated civil rights movement," she said. "And it's a great example of when we work together, what we can go against. Which is 600 miles of crazy terrain being chased by slave catchers to get people to be what they should be in the first case — which is free."