Accessibility links
Movie Review: EYE IN THE SKY Drone warfare forms the backbone of Eye In The Sky, starring Helen Mirren as a British military officer arguing over the messy ethics of collateral damage.

A War Seen In Unnerving Close-Up

A War Seen In Unnerving Close-Up 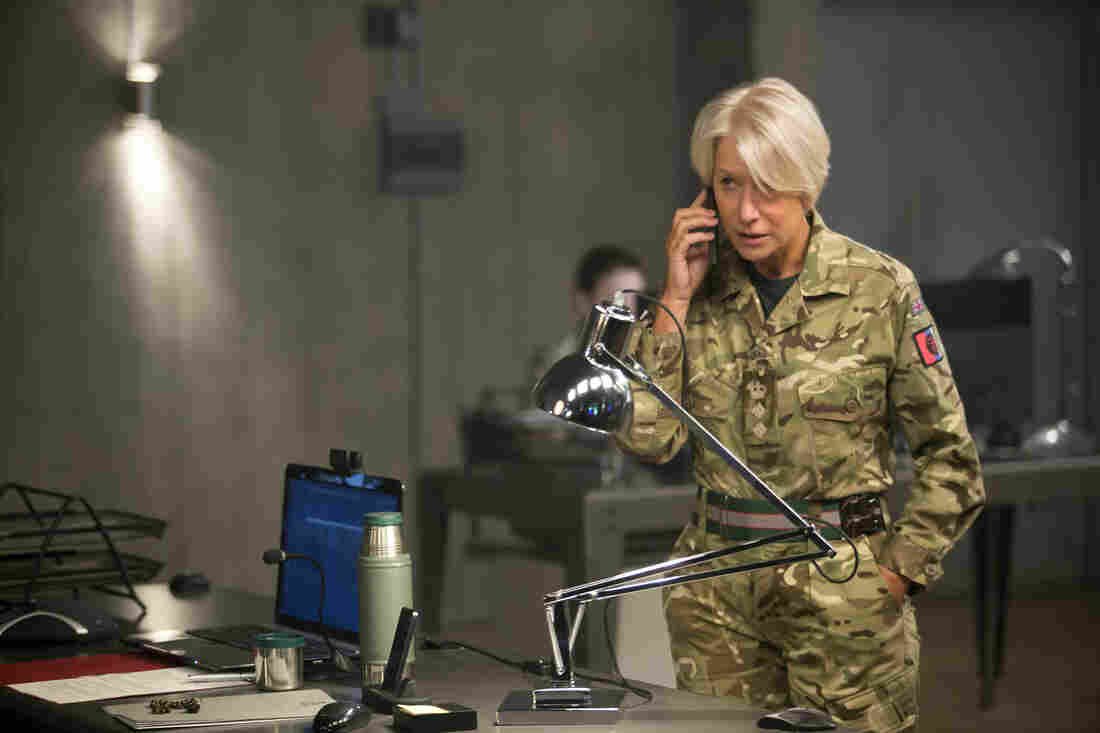 In A War, a Danish commander whose troops are under attack by the Taliban calls in an air strike, and later has to answer for it in a courtroom. Eye in the Sky mashes those two narratives together. While a drone pilot in Nevada prepares to hit al-Shabaab terrorists in Nairobi, the morality of this potential action is debated by politicos in London.

The movie is both provocative and fairly gripping, if not altogether convincing. As directed by Gavin Hood, a South African whose Rendition took a broader and more melodramatic look at Western responses to extremist violence, Eye in the Sky neatly contrasts urgency and hesitation, and pits near-certainty against reasonable doubt.

This is the structure provided by writer Guy Hibbert, whose script essentially interlaces a thriller with a courtroom drama. The story begins with a Muslim family in Kenya and a military officer in Britain. Col. Powell (Helen Mirren) has long tracked a U.K.-born woman who married a Somali man suspected of terrorism and converted to his brand of Islam. The family's young daughter, Alia (Aisha Tashow), is about to get in the colonel's way.

Powell and her small crew of technicians, no-nonsense except for their unnecessary camouflage uniforms, can't do the job alone. The American drone operator (Aaron Paul) and other U.S. military personnel are in the electronic loop. Their cooperation becomes essential after the colonel peeks inside a house via bird- and insect-mimicking drones that may be a bit cuter than their real-life equivalents. Powell determines that her targets are about to undertake a suicide bombing, so she wants to kill them first. Only the Yanks have the means to do that.

The process quickly gets lawyered up. There's an attorney to offer cautions at the base where Powell works, and British Lt. Gen. Benson (the late Alan Rickman) heads to a cabinet briefing room to consult with legalistic politicians. Soon, they've got the foreign secretary on the video-phone from Singapore. The stalling irritates Powell and Benson (and Rickman was a master of exasperation).

The talking heads are physically detached from the situation, but the British have a man on the ground in Kenya, Jama (Somalia-born Barkhad Abdi, who played the pirate leader in Captain Phillips). He's assigned to move Alia, who's selling loaves of bread, away from the house the British want to bomb. That turns out to be tricky, and so chubby-cheeked Alia becomes the human face of possible collateral damage.

All the live video provides an intimacy new to missile attacks. The Britons have seen in closeup the innocent girl they might slay. Still, they devote an implausible amount of time to discussing the quandary, and some moments of American reluctance seem even more unlikely. These scenes of ethical and political consideration work more as a filmed theater piece than as realistic cinema.

But as its engine the movie has the action in Kenya, where there's little talk, and all of it is pragmatic. People haggle over bread, unaware of the larger bargain being negotiated across three other continents.

Eye in the Sky — like Hood's previous film, Ender's Game — has lots of CGI and green-screen work. But this time the director employs special effects only to show things that could happen, and technology that really exists, in places that haven't quite caught up to the deadly implications. Those places would include, well, everywhere on Earth.