Accessibility links
Longtime Brooklyn Bartender Who Inspired 'Sunny's Nights' Has Died Sunny Balzano was the genial and eccentric proprietor of a beloved bar in Red Hook, Brooklyn. He died Thursday at 81, just weeks after the publication of a new book about his life and times. 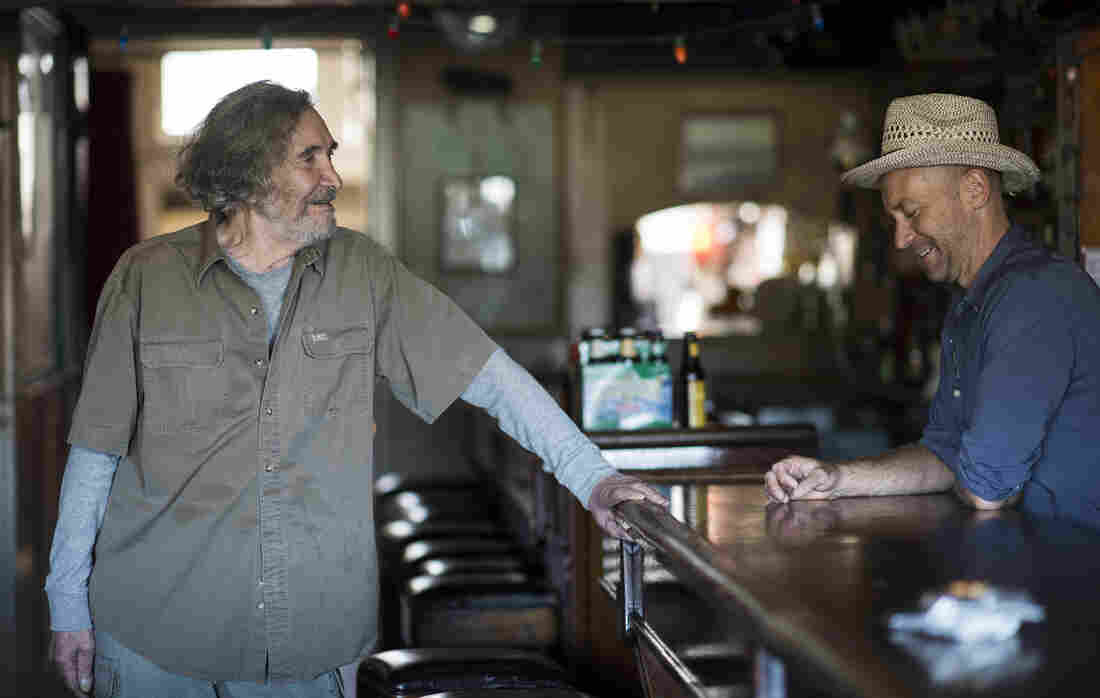 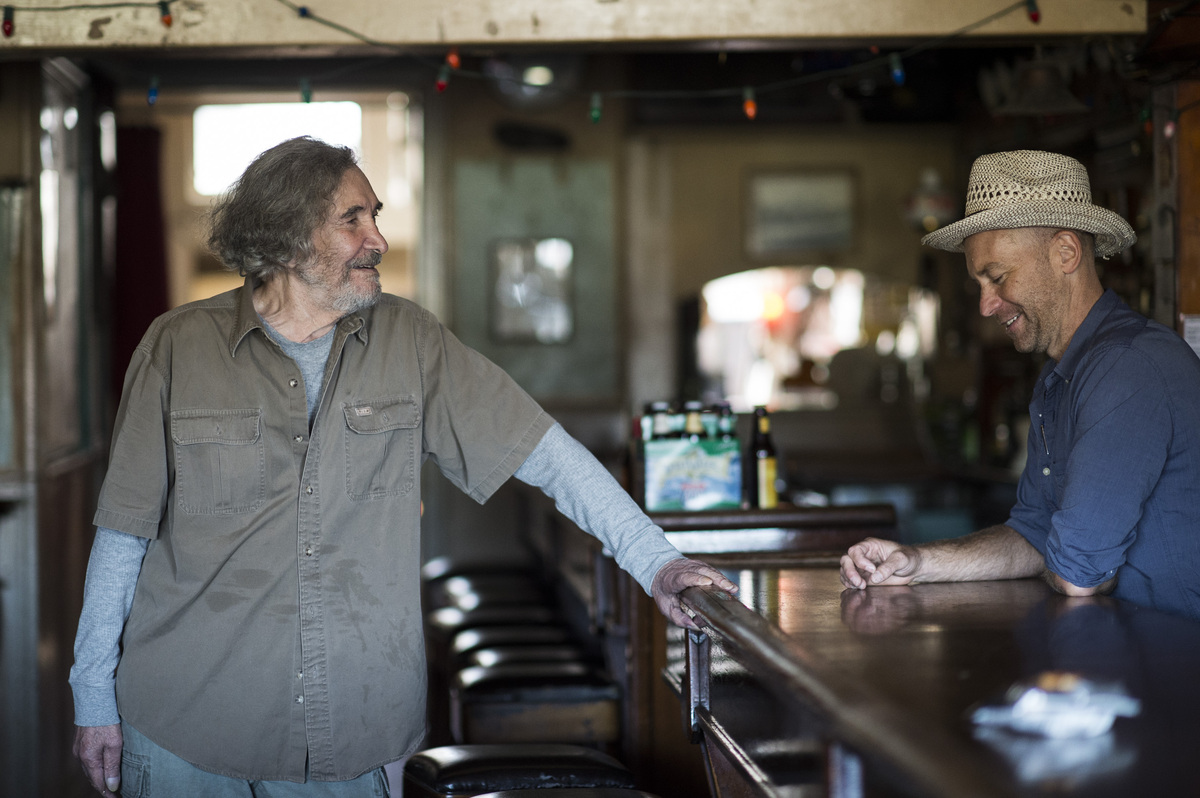 Sunny Balzano's modest watering-hole in Brooklyn was a throwback to another time. It was known simply as Sunny's, after the beloved bartender and raconteur who transformed a faded longshoremen's bar into a local institution. He died Thursday at the age of 81, just weeks after the publication of Sunny's Nights, a new book about his life and times.

Sunny was not a master of artisanal cocktails, as he was quick to admit. "I still don't know how to mix drinks, do I?," he joked during an interview at the bar last month. No one disagreed.

The main attraction at the bar was always Sunny himself. He was tall and lanky, his long hair turned silver. Sunny's easy laugh and endless stream of stories drew customers to a remote cobblestone street in Red Hook, Brooklyn. The only signpost was three letters jutting out from the facade: B-A-R.

Writer Tim Sultan first wandered into the bar in the winter of 1995. When he opened the door, he saw a dozen men looking directly at him. 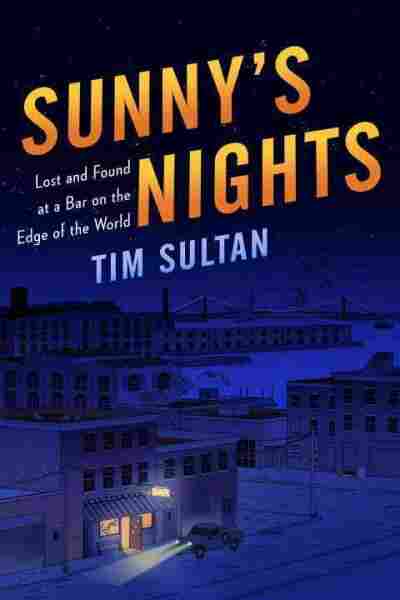 "So I stepped in, and it turned out the reason they were all looking at me was because there was a movie screen right next to the front door," he says. "And they were watching an old movie in black and white. A movie of the Martha Graham Dance Company dancing to Appalachian Spring. And I thought, well, this is a curious, unexpected situation I've stumbled into."

That was Sultan's first clue this wasn't a typical bar in a rundown neighborhood on the Brooklyn waterfront — and that Antonio "Sunny" Balzano was not your average bartender. Whatever skills he might have lacked as a mixologist, Sunny made up for with a steady stream of stories drawn more or less from real life. Like an incident just after his discharge from the Air Force. "I got shot. But the truth is that I shot myself. And the truth is, it was an accident," he said. "The one time I fired a gun, I shoot myself!"

Sunny was born next door to his family's bar in 1934. The place hasn't changed all that much since. Same long wooden bar, same nautical knick-knacks.

"There's a register at the end of the bar, and that register goes to $1, and there's even a mark on it for one penny," Sunny said.

Back in 1934, Red Hook was home to a thriving port and ship-building industry. "There'd be 10,000 people that worked across the street. We were the closest restaurant and bar. And we were one of I think like 40. This is the only one left of all of the old ones, you see?"

Sunny left Red Hook when he was 17 for the Air Force. Then he tried acting and painting. Lived in India for a while before returning, broke, in the late 1970s. He found the neighborhood in rough shape, too.

"There was a point when I first came back, there were wild dogs in the street," Sunny said. "Every night, every other night, or once a week at least, whoever it was that did that did that would steal cars. And they would burn the cars, on the corner. They would set 'em afire. It was outlaw."

Sunny's uncle ran the bar then. When he died, Sunny took over. And he closed the bar down — except for Fridays. "And that one night, folks considered that like a party at Sunny's," he said. "Before it was all men would come, you know. But now they started to bring their girls, and their girls would get dressed up. We had a lot of publicity. My goodness. For this simple thing we were doing. And it was always honest. We didn't do anything to impress anybody, really."

"Without intending to be, Sunny was a shrewd businessman," says Sultan. "Because he understood the truth that the less something is available, the more people will want it."

Sultan became a regular at Sunny's, then a bartender. Eventually he quit his day job at a magazine, but he kept working at Sunny's. Partly for the money, but mostly to hear Sunny' s stories. Sultan compiled the best of them into his new book, Sunny's Nights. "Sunny makes for a very striking figure. But he also had a roguish ... uh ... personality," Sultan said with a laugh. (To which Sunny shot back: "I don't know what the hell that means!")

Sunny's romantic life was complicated. He was married a few times, and divorced. He had some run-ins with mobsters. And with the city of New York over the bar's liquor license. These days, Sunny's is open, legally, six nights a week. The crowd — and the neighborhood — have changed again. You'll find more hipsters than longshoremen. But the bar still reflects the way Sunny looked at life, and his calling.

When I met Sunny, the ability to mix a fancy cocktail was still not a requirement to work at Sunny's.

"I trust you. There's something about you that is very trusting. You know, do you want to bartend here? You can bartend here!"

It was a tempting offer. But Sunny Balzano died before I could take him up on it.