Accessibility links
Interview: Tracy Chevalier, Author Of 'At the Edge Of The Orchard' The author's latest book, At the Edge of the Orchard, follows a pioneer family growing apple trees in Ohio. Chevalier says she got the idea after hearing the real story of Johnny Appleseed. 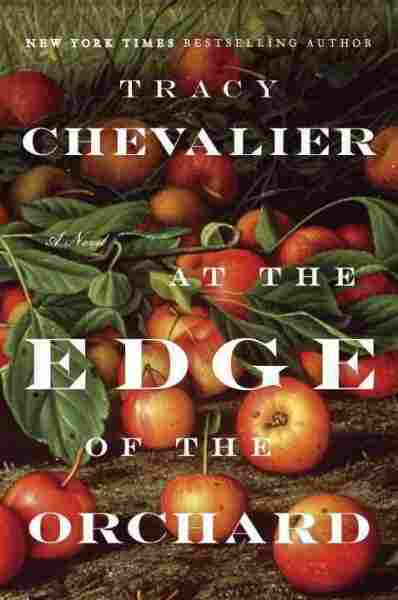 At the Edge of the Orchard

Title
At the Edge of the Orchard
Author
Tracy Chevalier

Writer Tracy Chevalier spins fiction from history. Her best-selling novel Girl with a Pearl Earring was set in the 17th-century studio of Dutch painter Johannes Vermeer; 2010's Remarkable Creatures focused on 19th-century English fossil hunters; and 2005's The Lady and the Unicorn told the stories of medieval tapestry weavers. Now, Chevalier's latest book looks at a pioneer family trying to scrape out a life in the swamps of Ohio.

It's called At the Edge of the Orchard, and it follows the lives of James and Sadie Goodenough, two characters who are at each other's throats for much of the book. Sadie is a violent, abusive drunk; and James is obsessed with growing sweet apples, as opposed to the sour, cider-making varieties that would enable Sadie's drinking. The couple has 10 children, but many of them are picked off by swamp fever.

Chevalier is known for the research she puts into her novels. She took a painting class when she was writing Girl with a Pearl Earring, and went fossil hunting for Remarkable Creatures. But she tells NPR's Melissa Block that writing At the Edge of the Orchard called for a different kind of research: "I ate a lot of apples."

On what drew her to a story about a pioneer family

It started with Johnny Appleseed, actually. And I hadn't realized that Johnny Appleseed lived a very different life from what the storybooks told us as kids. You know, we always grew up ... thinking that he handed out apple seeds far and wide in Ohio and Indiana, and promoted healthy eating and healthy living. And actually, Johnny Appleseed anticipated the arrival of settlers in Ohio. He would go to the places he thought people would settle in a few years' time, plant a nursery of apple trees and then sell them to settlers when they came. He was a business man. He was making money.

I had this vision of a couple, a pioneer couple, arguing over apples — one of them wanting sweet apples to eat, the other wanting to grow sour apples so that there'd be enough cider to go around ...

And the other thing is that he sold apple trees that produced apples that were made into cider and applejack, not sweet apples for eating. And when I read about this ... I had this vision of a couple, a pioneer couple, arguing over apples — one of them wanting sweet apples to eat, the other wanting to grow sour apples so that there'd be enough cider to go around to obliterate the difficult lives they were leading.

On Sadie Goodenough, a character who is hard to like

There are times when I'm hoping the reader will feel slightly sympathetic. She's in a marriage she should never have made and she's kind of stuck in this swamp. And she is, yes, self-centered and a terrible mother; but she also is misunderstood, I think, at times, and frustrated. ...

And Johnny Appleseed is a little bit like her drug dealer because he comes along twice a year in his canoe to see how they're doing and he sometimes takes off the barrels of apples and brings them back pressed for them as cider. ... I don't think he does it maliciously but he is, as I said — he is a businessman, so he's got a slightly different take on it all.

Actually, some of the myth is true. He did sometimes wear a tin pot for a hat. His clothing was interesting, shall we say. He often wore a coffee sack that he cut holes out of, and a rope for a belt. So yeah, he was a strange guy.

He was actually making all this money not for himself, but really because he was what they called a Swedenborgian, a very peculiar Christian sect. And Johnny Appleseed spent a lot of time proselytizing for Swedenborgians, so he would come and visit a family like the Goodenoughs and would say, "Let me bring you news fresh from heaven." And he'd go on in this kind of rant and a lot of the settlers — I read some hilarious accounts of them going: This guy, we don't understand a word he's saying, but you know he's kind of entertaining, so he's harmless.

On her favorite apple from the book.

But my favorite apple that's in the book, that's mentioned in the book, is called the Pitmaston Pineapple and it tastes of nuts and honey, but it also has a kind of pineapple finish — faint taste of pineapple at the end. But I loved them so much that I have planted my own Pitmaston Pineapple tree and in a couple years I'm really hoping it bears fruit.