NPR's Melissa Block asks Annie Dillard about the celebrated author's "masculine mind," her decision to write less, and her baseball skills. Dillard's new collection of essays is called The Abundance. 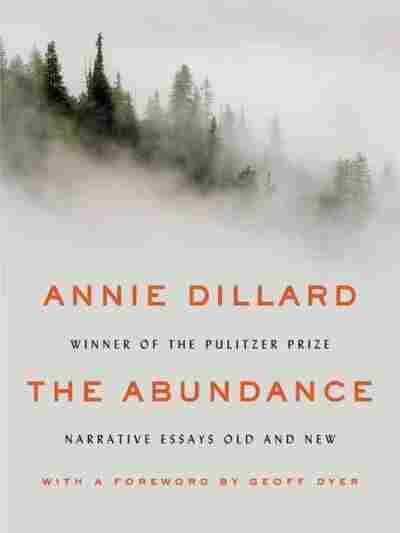 by Annie Dillard and Geoff Dyer

The writer Annie Dillard has a new collection of her narrative essays. It's called "The Abundance." And the first piece in the book is a real stunner. It's 1979. She's on hillside near Yakima, Wash. She's there to witness a total eclipse of the sun - more about that in a second. Dillard won a Pulitzer for 1974's "Pilgrim At Tinker Creek," which was set in and around that creek in southwestern Virginia. She's 70 now, the author of a dozen books, and she spoke with me about writing and more from her breezy porch in Key West, Fla.

Annie Dillard's work is often metaphysical. It pulls from nature lessons or mostly questions about life, God, all the many whys of existence. So it makes sense that when she wrote the essay "Total Eclipse" it was about much more than the moon obscuring the sun for a few minutes.

ANNIE DILLARD: It was about the eruption of the irrational into daily life because, boy, is the sight of a total eclipse irrational, and people were screaming. I mean, all sorts of science nuts were out there with their cameras screaming their heads off 'cause it seemed like the end of the world.

BLOCK: Screaming in terror really then.

DILLARD: Yes, oh, absolutely. I'd seen a great many partial eclipses, but a partial eclipse has the same relation to a total eclipse as flirting with a man does to marrying him. It's completely different.

BLOCK: How easy or hard is it for you to summon up what that experience was like, that of seeing and being part of that total eclipse 37 years ago?

DILLARD: How hard is it to write? It's a [expletive].

BLOCK: (Laughter) No, to remember what that was like, to bring back that sensation 37 years later.

DILLARD: Well, I've thought of it a lot. Old memories are very easy to get except that once you write about something you've destroyed it. You no longer have the memory. You only have the memory of what you've written.

BLOCK: What's on the page.

BLOCK: When you won the Pulitzer for "Pilgrim At Tinker Creek," you were so young. You were still in your 20s. Does it feel like an impossible standard to measure up to? Do you carry that with you or can you shake that off?

DILLARD: Well, it was pretty scary, but Updike said once that he couldn't write a sentence without John Leonard of The New York Times book review sitting on his shoulder and making sarcastic remarks about it. Yeah, these people haunt you, but you shake them off. My next book was only 66 pages in typescript. It took me 18 months full time to shake them off (laughter) to get to where I could actually write the thing instead of being self-conscious. I kept trying to build myself up into a pitch where I could even understand what I'd written the day before. It's metaphysics. And it turns out that not a lot of people are comfortable with that, but I was. I guess that's why they told me I had a masculine mind. At the same time, I also had a boy's arm.

BLOCK: The boy's arm meaning you played a lot of baseball. You played it well.

DILLARD: There is was, this enormous arc my muscle memory had not calculated for.

BLOCK: (Laughter) And was that the end of your baseball career or could you compensate?

DILLARD: Oh, no, I had to stop. It was too embarrassing.

BLOCK: One of the chapters in the collection comes from your book "The Writing Life" and you describe what the sensation of writing is when it's at its best. You say it's like one of unmerited grace. And I wonder if you could read what comes after that. This on page 114.

DILLARD: (Reading) At its best, the sensation of writing is that of any unmerited grace. It is handed to you but only if you look for it. You search. You break your heart, your back, your brain and then and only then it is handed to you. From the corner of your eye, you see motion. Something is moving through the air and headed your way on two white wings. It flies directly at you. You can read your name on it. If it were a baseball, you'd hit it out of the park. It is that one pitch in a thousand you see in slow-motion.

BLOCK: Do you have that sensation still? I know you've said before that you've stopped writing. Have you stopped entirely?

DILLARD: Well, the creative process obtains in all creative acts. So if I'm painting suddenly I'll see something that I didn't see before.

BLOCK: And with writing - you haven't published a book for a long time.

DILLARD: I write a lot of emails. I write in my own journal when something extraordinary or funny happens. And there's some nice imagery in there. I don't think of what to do with it.

BLOCK: You don't think about another book at this point.

DILLARD: No, I don't. I had good innings, as the British say. I wrote for 38 years at the top of my form, and I wanted to quit on a high note.

BLOCK: Tell me about the title that you chose for this collection, "The Abundance."

DILLARD: It was something I'd written down in my journal many, many years ago. It was a little passage from the Quran, which I'm looking for as I flip noisy pages. They will question the concerning what they should expend. Say, the abundance, what should you spend? Spend it all. That's what writing's about. Don't save something good for a later place. Don't hold back from your students, from the poor, don't try to keep anything for yourself 'cause it'll turn to ashes. If you spend it, it will fill up from behind as it were, like a well. Empty it. You'll be OK.

BLOCK: That's such a lovely image.

BLOCK: Annie Dillard, thanks so much for talking with us.

DILLARD: It's been my pleasure.

BLOCK: Annie Dillard - the title again for her new collection of essays is "The Abundance: Narrative Essays Old And New."