Accessibility links
FACT CHECK: Republican Candidates On Keeping Or Changing Social Security The candidates say they want to leave Social Security as it is for people who are already retired, or soon will be. But Marco Rubio and Ted Cruz have proposed changes for younger workers. 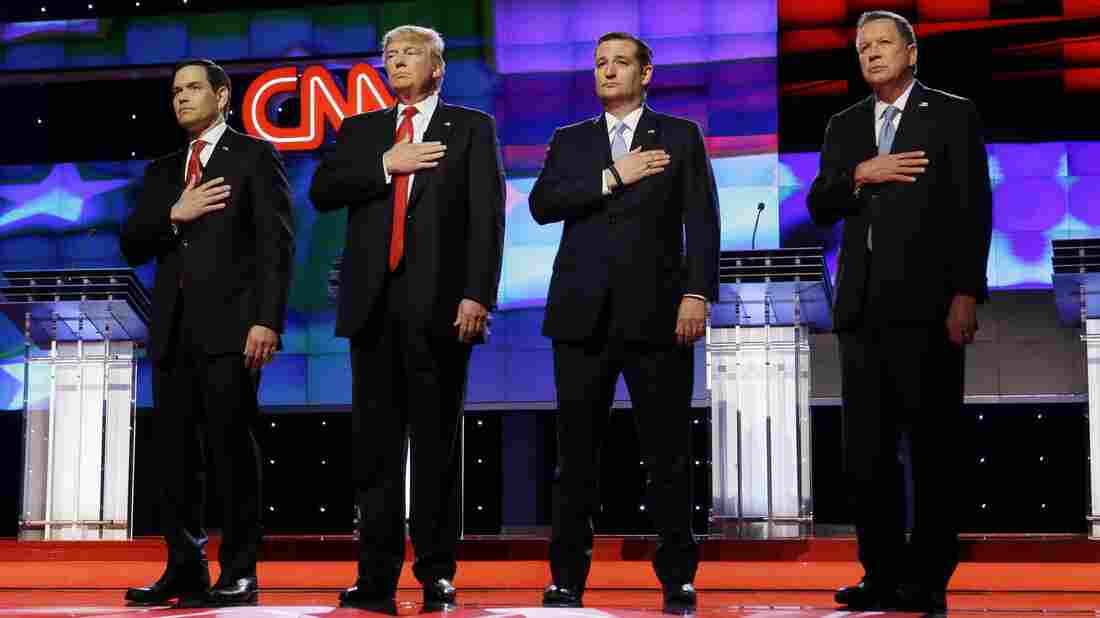 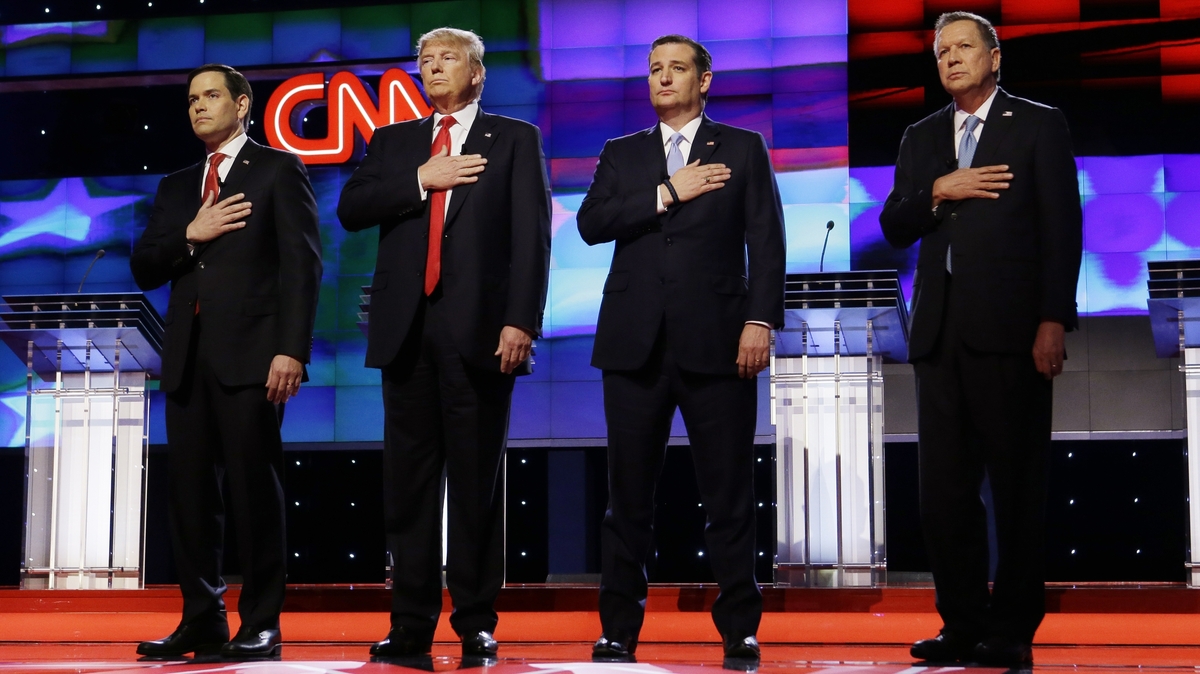 This story is part of NPR's fact-checking series, Break it Down.

Florida, which holds its presidential primary on Tuesday, is home to more than 3 million seniors who rely on Social Security. At the GOP debate in Miami Thursday night, candidates were asked about their plans for the program.

All the Republican candidates say they want to leave Social Security as it is for people who are already retired, or soon will be. But Marco Rubio and Ted Cruz have proposed changes for younger workers. Donald Trump says he wants to preserve Social Security benefits and is counting on stronger economic growth to help pay for that.

Marco Rubio: "Anyone who tells you Social Security can stay the way it is is lying. Any politician that goes around saying, 'We don't have to do anything; all we have to do is raise a few taxes or just leave it the way it is,' they're not being honest with you. Social Security will go bankrupt and it will bankrupt the country with it. So what it will require is people younger, like myself, people that are 30 years away from retirement, to accept that our Social Security is going to work differently than it did for my parents. For example, instead of retiring at 67 the way I'm supposed to retire, I'd have to retire at 68....If I've made a lot of money, my Social Security benefit will not grow a fast as someone who made less money."

Ted Cruz: "Social Security right now is careening towards insolvency, and it's irresponsible.....For younger workers, we need to change the rate of growth of benefits so it matches inflation instead of exceeding inflation. And as you noted Dana, we need to have for younger workers that a portion of your tax payments are in personal accounts like the 401(k) that you own, that you control, that you can pass on to your kids and grandkids."

John Kasich: "If you've had wealth throughout your lifetime, when the time comes to be on Social Security, you'll still get it. It will simply be less. And for those people who depend on that Social Security, they'll get their full benefit."

Donald Trump: "I will do everything in my power not to touch Social Security....I want to make our country rich again so we can afford it."

1. How big is the hole in the Social Security safety net?

1. The question from CNN somewhat overstates the problem. Social Security won't "run out of money" in 20 years. What will happen — somewhere around 2035 — is the program will exhaust its "Trust Fund," which Social Security uses to help supplement money from payroll taxes. Even after the trust fund is gone, payroll taxes paid by workers will continue to flow into the system, and those funds will be sufficient to cover about three-quarters of all retirement benefits. In other words, if nothing is done, future retirees could still expect to collect 75 cents for every dollar of Social Security they're owed. (Social Security has a separate program that pays disability benefits, and it faces a more urgent cash crunch. If money from the retirement program is diverted to back fill the disability program, the trust fund will be exhausted a few years earlier.)

2. There are a number of ways to close the gap between the money Social Security expects to take in from payroll taxes (the sole source of revenue once the trust fund is exhausted) and what it's expected to pay out in retirement benefits. All of the fixes involve some combination of raising revenue and/or cutting benefits. If policy makers act now, the gap could be closed with relatively modest changes. The longer we wait, the larger the required changes will have to be. Some of the fixes proposed by the GOP candidates would help to narrow the gap, but none would close it altogether.

The basic challenge facing Social Security is demographic. The system relies on payroll taxes from people who are working to pay benefits to those who are retired. That worked well when there were four or five workers for every retiree. But that ratio has now dropped below three workers per retiree and it's drifting towards two. Absent another baby boom or a massive influx of immigrants, that's not likely to change.

If policy makers take no action, there will still be money coming in to Social Security from payroll taxes. It just won't be enough to cover all the benefits that retirees will be owed. (It will be enough to pay about 75 cents on the dollar.)

Closing that gap will require cutting benefits, raising taxes, or some combination of the two.

Rubio's proposal: Marco Rubio suggests gradually raising the retirement age at which younger workers like himself become eligible for Social Security. This is effectively a cut in benefits, since retirees would have fewer years to collect. Raising the top retirement age from 67 to 70 as Rubio proposed would fill about one-third of the Social Security shortfall. Rubio also suggested a form of "means testing," in which wealthier retirees would see smaller benefit increases in the future. The Senator didn't offer any details, but other means testing proposals have been estimated to reduce the funding shortfall by about 10 percent.

Cruz's proposal: Ted Cruz suggests a different form of benefit cut, in which future retirees would receive smaller cost-of-living adjustments. Some argue that the current inflation measure used by Social Security overstates the price increases seniors face, although others insist cost of living adjustments should be bigger, not smaller. The cut that Cruz suggests would fix about 15 percent of the funding shortfall. Cruz also proposes letting workers divert a portion of their payroll taxes into private retirement accounts. This may or may not be a good idea. It was hotly debated during the George W. Bush administration. But using payroll taxes for any purpose other than Social Security would make the system's solvency problems worse, not better.

Trump's proposal: Donald Trump argues against any cut in benefits or increase in taxes, instead relying on faster economic growth to close the Social Security funding gap. Kathleen Romig of the Center on Budget and Policy Priorities says faster growth would help with this and many other challenges. But she warns it's not a "magic bullet." Forecasters have tried to predict Social Security's fate under many different economic scenarios, and there's no realistic growth level that would close the funding gap on its own. Faster growth cuts both ways, increasing revenue from payroll taxes but also increasing benefits, which are tied to wages.

Revenue proposals: None of the Republicans suggested raising payroll taxes, but that's another way policymakers could help to close the funding gap. Payroll taxes for Social Security are currently 12.4 percent, split between employers and employees. Raising that rate to about 15 percent would close the funding gap entirely. (There's a separate, 2.9 percent payroll tax for Medicare.) Alternatively, policymakers could apply the payroll tax to more income. Wages and salaries above $117,000 a year are currently exempt from Social Security taxes. If that cap were eliminated, it would solve about 90 percent of the funding gap.

Any of these fixes can be thought of as items on a menu, to be mixed, matched, and combined in whatever way is most politically palatable. By acting now, policymakers could solve the Social Security gap with a relatively modest increase in taxes and modest adjustments to benefits. With each passing year of inaction, though, the gap to be filled gets larger.