Accessibility links
Astronaut's Photos From Space Change How We See Earth Astronaut Scott Kelly is back from nearly a year in space. NPR's Melissa Block says she misses the photos he shared from orbit, but tweets from his re-entry have been pretty entertaining. 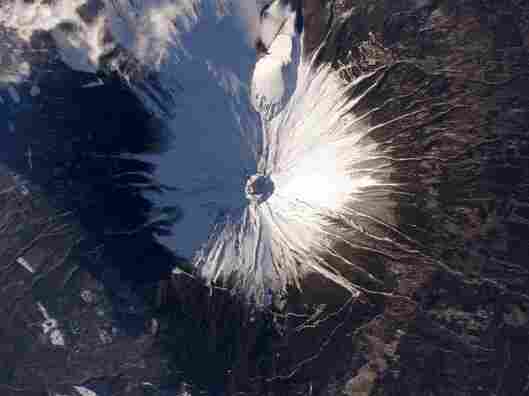 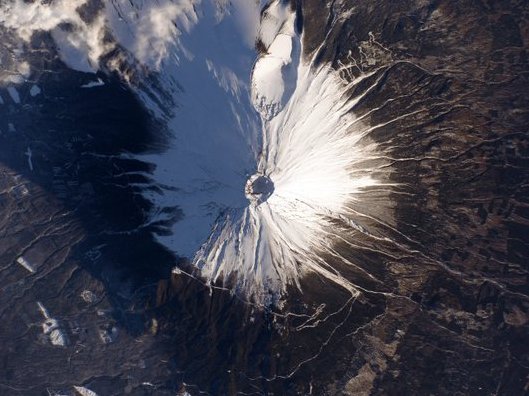 With this shot of Mount Fuji, astronaut Scott Kelly tweeted, "your majesty casts a wide shadow!"

Yesterday, NASA announced that astronaut Scott Kelly will retire from the space agency as of April 1st. Kelly holds the U.S. record for the most time spent in space.

For nearly a full year, he zoomed along at 17,500 miles per hour — orbiting 230 miles above earth — on the International Space Station. And for those million or so of us who follow him on Twitter, Cmdr. Kelly's year in space gave us a mind-expanding view of planet Earth.

Great to be back on #Earth. There's no place like #home! Taking the plunge after my #Houston arrival. #YearInSpacehttps://t.co/NhyLTbqcxS

Kelly posted spectacular photos — awesome, in the true sense of the word. He called them, earth-art.

Through his zoom lens, he snapped the majestic snowy cap of Mount Fuji from straight overhead. It looks like a barnacle.

The cracking blue ice of the Himalayas turns into a stunning lapis mosaic.

One day, Africa appears as a mass of crinkly brown veins; another, it's become vivid streaks of orange and gold.

Crimson and violet squiggles around Australia could be an abstract painting.

My first #rain on #Earth! Great end to a full day of post-flight tests @NASA_Johnson. I missed weather. #YearInSpace pic.twitter.com/7FN4ptstY2

When the capsule bearing Kelly and cosmonauts Mikhail Kornienko and Sergey Volkov parachuted to a landing in Kazakhstan earlier this month, that fantastic journey came to a close.

Back home in Houston, Scott Kelly will be poked and prodded, weighed and measured, all in the name of science.

And his terrestrial tweets now bring their own delights. He posted video of his first plunge into a pool!

A few days later - there was Scott Kelly with his arms stretched overhead, and a big smile - looking up at a dark sky:

Kelly has rejoiced in the simple pleasure of being able to sit down at a table for dinner! He's even excited about finally getting to go to the dentist for a teeth cleaning. I guess that's what a year in space will do to you.

I realize I've been missing Scott Kelly's technicolor snapshots from space. It was impossible to look at those images and not be awed by the sheer natural beauty of this blue marble.