Accessibility links
Walt Whitman's Letter For A Dying Soldier To His Wife Discovered Jackie Budell of the National Archives talks about a newly discovered a letter written by Walt Whitman, who visited hospitals and wrote letters on behalf of injured soldiers during the Civil War. 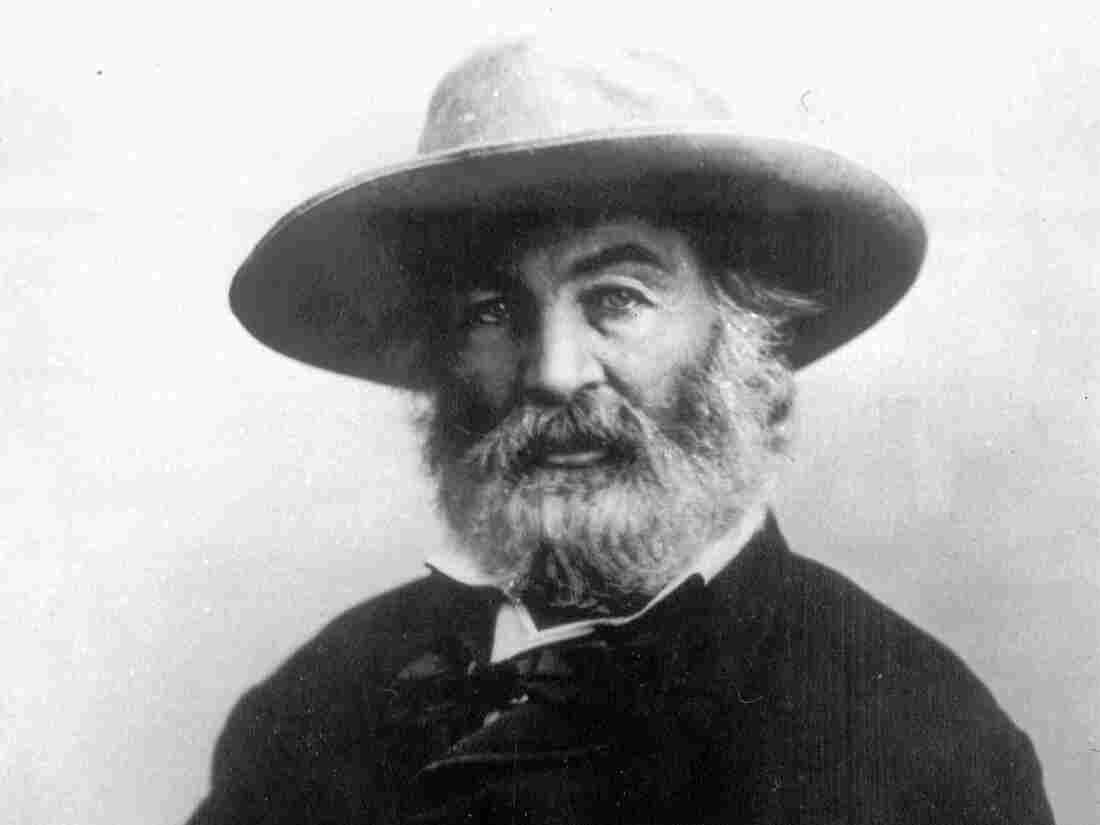 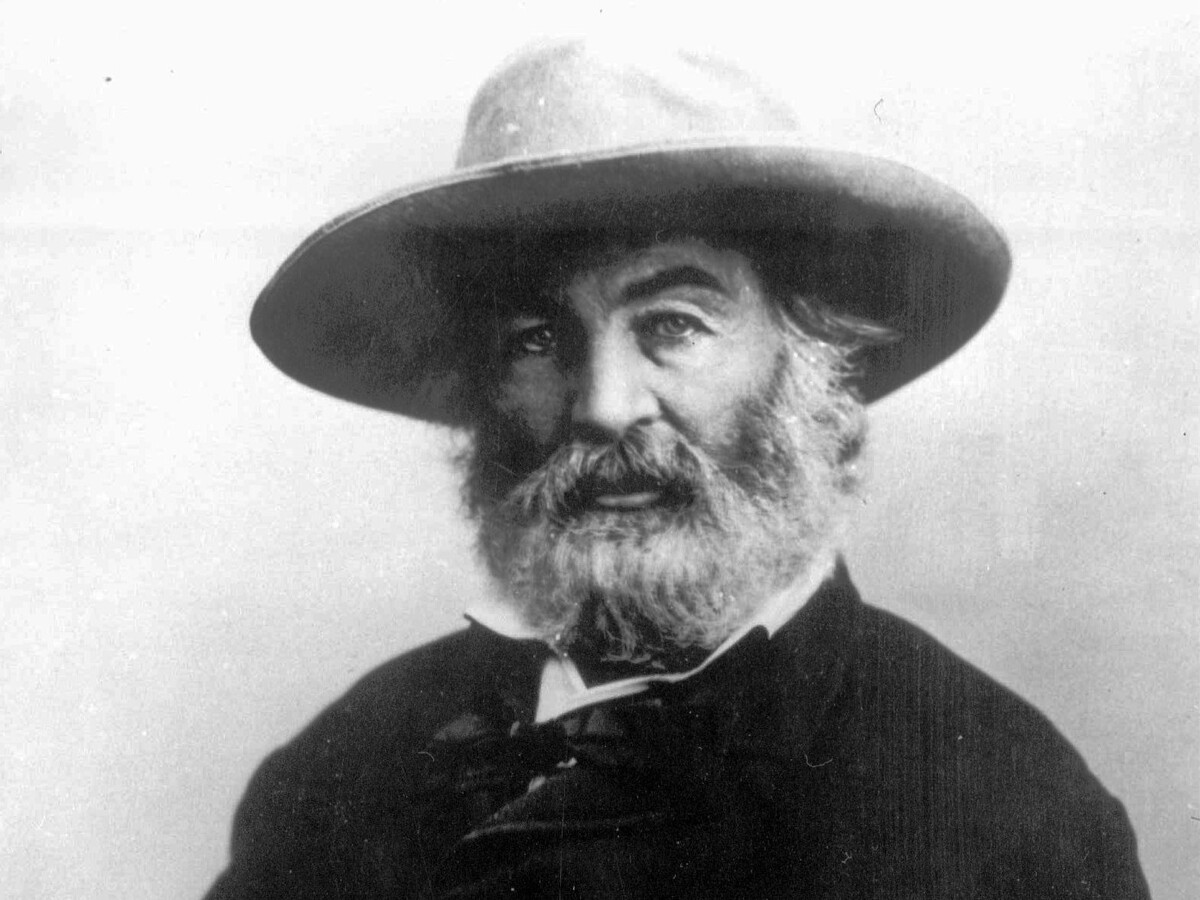 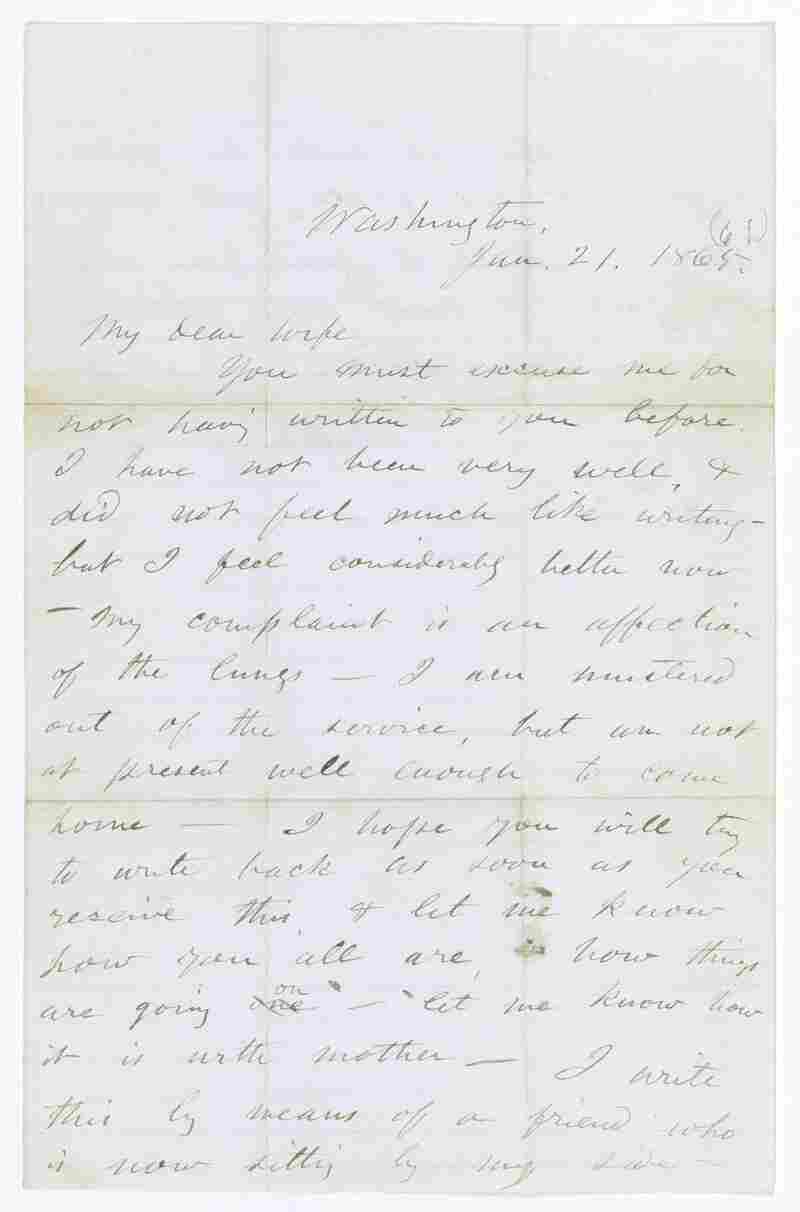 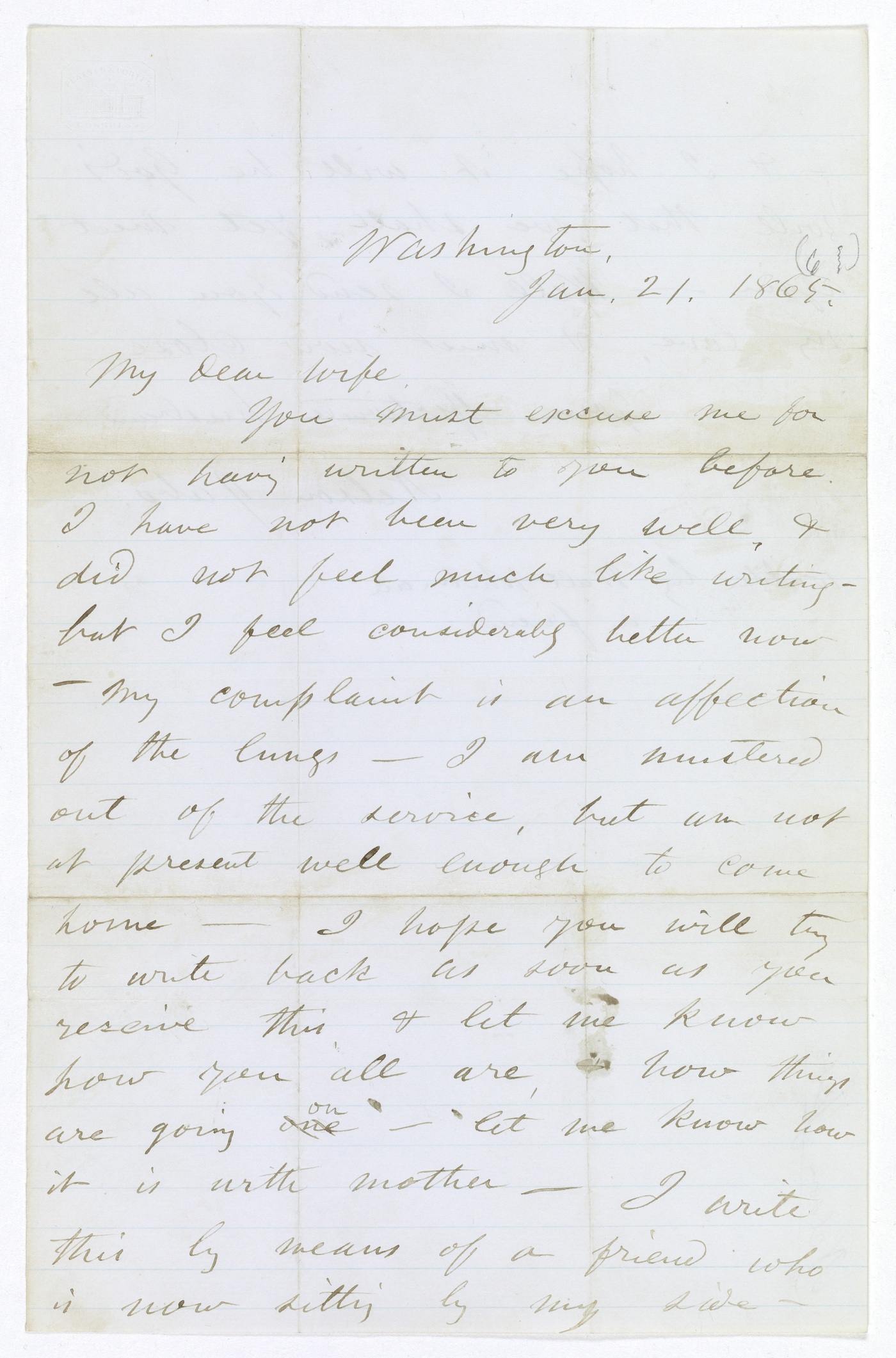 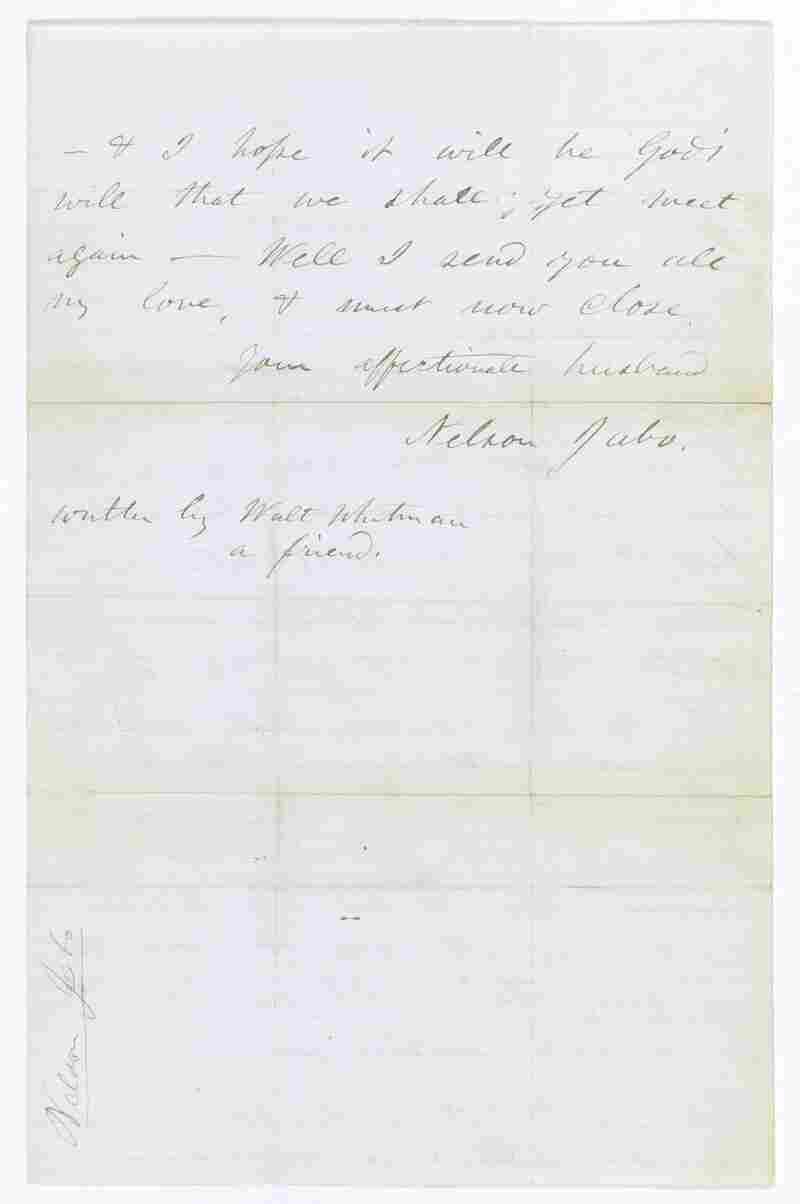 Walt Whitman wrote letters for soldiers he visited in hospitals. This is one of three researchers have found with Whitman's name on it. Courtesy U.S. National Archives and Records Administration hide caption 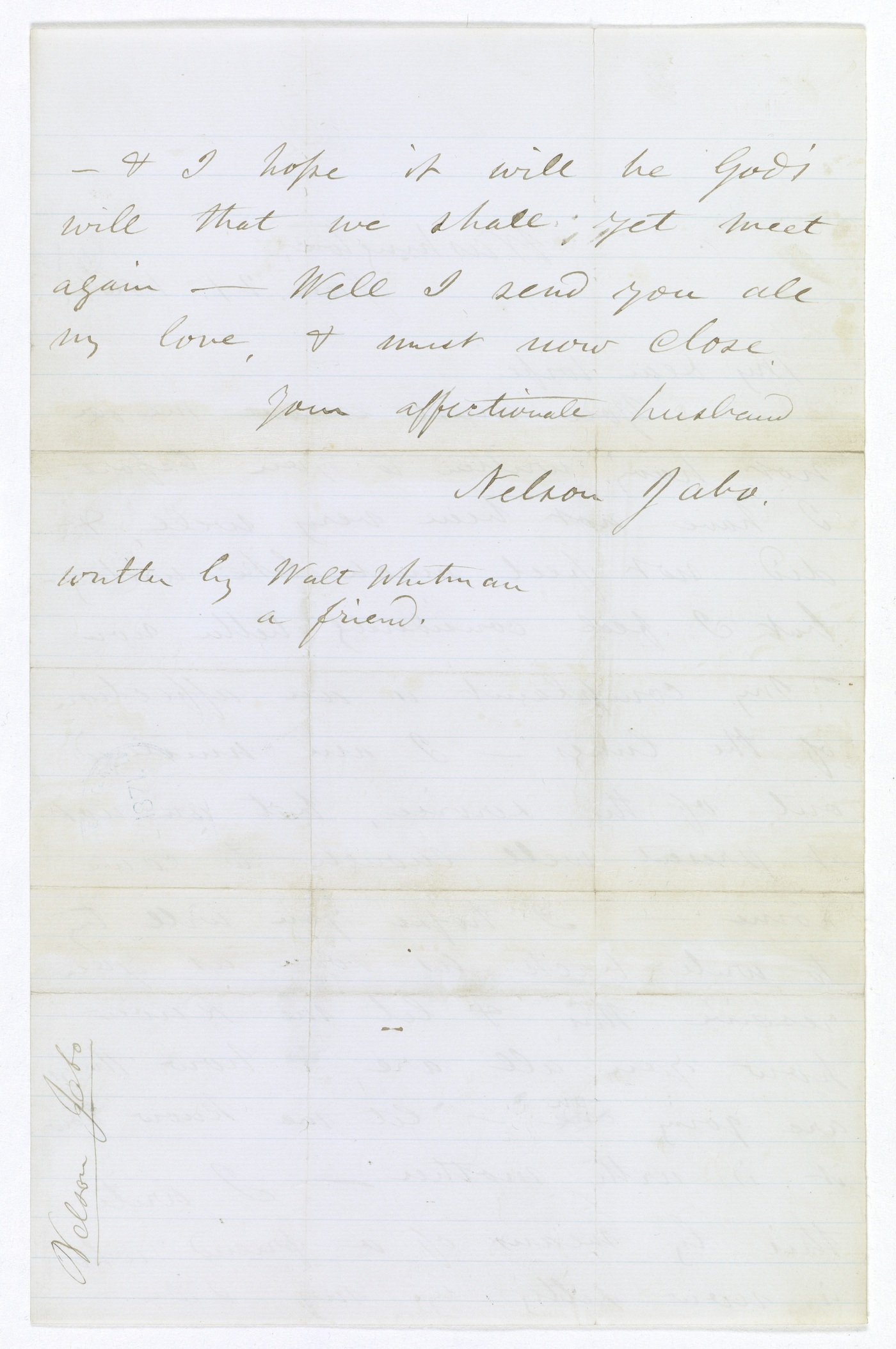 Walt Whitman wrote letters for soldiers he visited in hospitals. This is one of three researchers have found with Whitman's name on it.

While combing through various Civil War files at the National Archives, a volunteer recently discovered a letter written by poet and essayist Walt Whitman on behalf of a Union soldier dying in a hospital far from home.

The National Archives is the repository of the nation's most important documents, including some they didn't even know they had, like said letter.

You must excuse me for not having written to you before. I have not been very well + did not feel much like writing – but I feel considerably better now – my complaint is an affection of the lungs. I am mustered out of service, but am not at present well enough to come home. I hope you will try to write back as soon as you receive this + let me know how you all are, how things are going on – let me know how it is with mother. I write this by means of a friend who is now sitting by my side + I hope it will be God's will that we shall yet meet again. Well I send you all my love + must now close.

Written by Walt Whitman
a friend.

The post-Civil War letter was discovered in February. Despite Whitman's claims to have written hundreds of letters for soldiers he would visit in hospitals, it is one of only three that researchers have been able to find with Whitman's name on it, says Jackie Budell, a specialist with the National Archives.

Whitman described his visits to wounded soldiers in an 1864 article in The New York Times.

Many sick and wounded soldiers have not written home to parents, brothers, sisters, and even wives, for one reason or another, for a long, long time. Some are poor writers, some cannot get paper and envelopes; many have an aversion to writing because they dread to worry the folks at home — the facts about them are so sad to tell. I always encourage the men to write, and promptly write for them.

"Hospitals during the Civil War were not a safe place to be, so it's really very admirable that he chose to be a volunteer in the hospitals," Budell says. Whitman had a government job but would frequently leave work early to visit the men.

"My custom is to go through a ward, or collection of wards, endeavoring to give some trifle to each, without missing any," Whitman writes in the Times. "Even a sweet biscuit, a sheet of paper, or a passing word of friendliness, or but a look or nod, if no more."

Whitman gave out fruit, candy or small amounts of change, Budell says. "But I do think it was his investment of time and the emotion that he showed the boys that was probably what they were looking for the most."

The newest discovery is believed to have been written in 1866, despite the 1865 date, according to The Washington Post.

Whitman was writing on behalf of Robert Nelson Jabo, a French Canadian who had been living in Clinton County, N.Y. The letter is addressed to Jabo's wife, who was named Adeline. The couple had six children at home, Budell says. Jabo spent most of his time between 1861 and 1866 in the service, and died in 1866.

"I think Walt's time was the most important gift that he was giving these men," Budell says. "Really they just needed someone to sit by their side."

More of Whitman's diary entries from his time during the war are collected in the book Memoranda During the War. Whitman wants readers to remember (though maybe not too much) the "lurid interiors" and "Hospital part of the drama" — those struggles of the Civil War apart from the dramatic outdoor battles.

Future years will never know the seething hell and the black infernal background of countless minor scenes and interiors, (not the few great battles) of the Secession War; and it is best they should not. In the mushy influences of current times the fervid atmosphere and typical events of those years are in danger of being totally forgotten.

"I'm sure many of [the soldiers] kind of knew what was about to happen to them," Budell says. "And so they didn't want to worry family at home, but at the same time still wanted to give some parting thoughts to a wife or a mom who wondered where they were."

Whitman's skill as a poet and writer also helped the men, who may not have been able to fully express themselves, Budell says. "You can envision that he was, in effect, kind of helping them to verbalize maybe what they weren't able to say."

In the audio version of this story, we say that Nelson Jabo was able to return home to New York state sometime after the letter was written. In fact, he did not make it back home. He died of tuberculosis as a charity patient at Providence Hospital in Washington, D.C., in 1866.