Accessibility links
1976: The Last Time Republicans Duked It Out To The Last, Heated Minute That year was the last genuinely contested political convention. In a heated race to amass the most delegates, Ronald Reagan nearly denied Pres. Gerald Ford the presidential nomination. 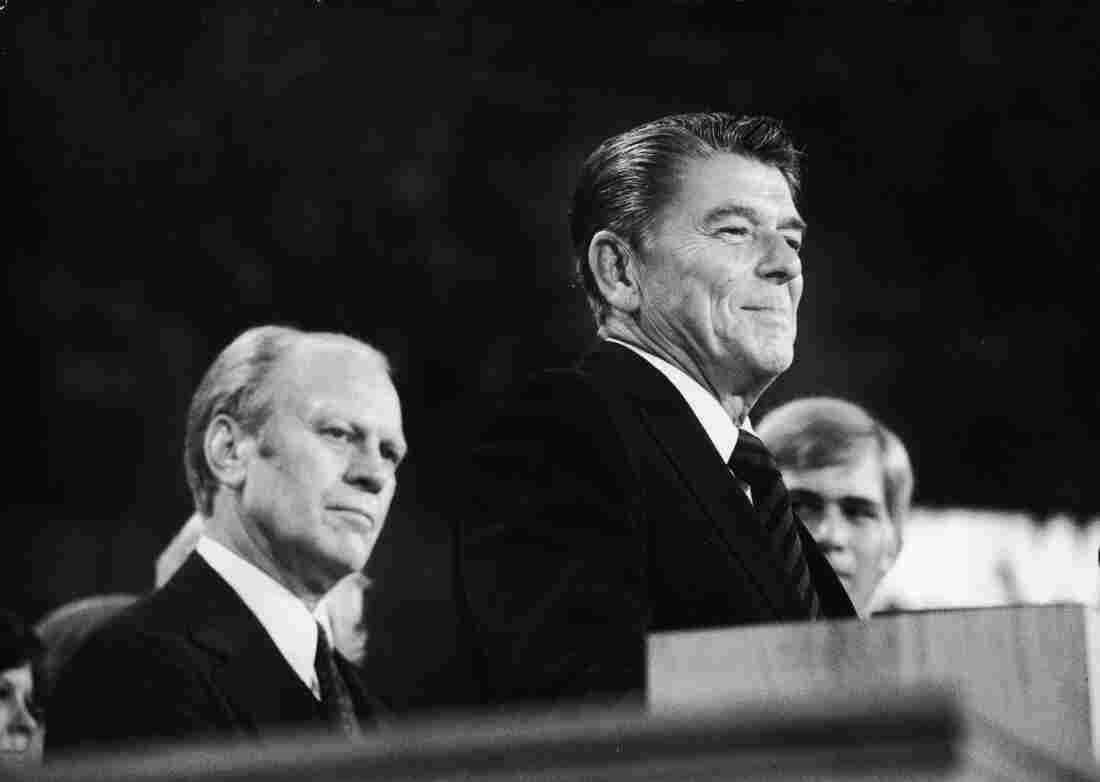 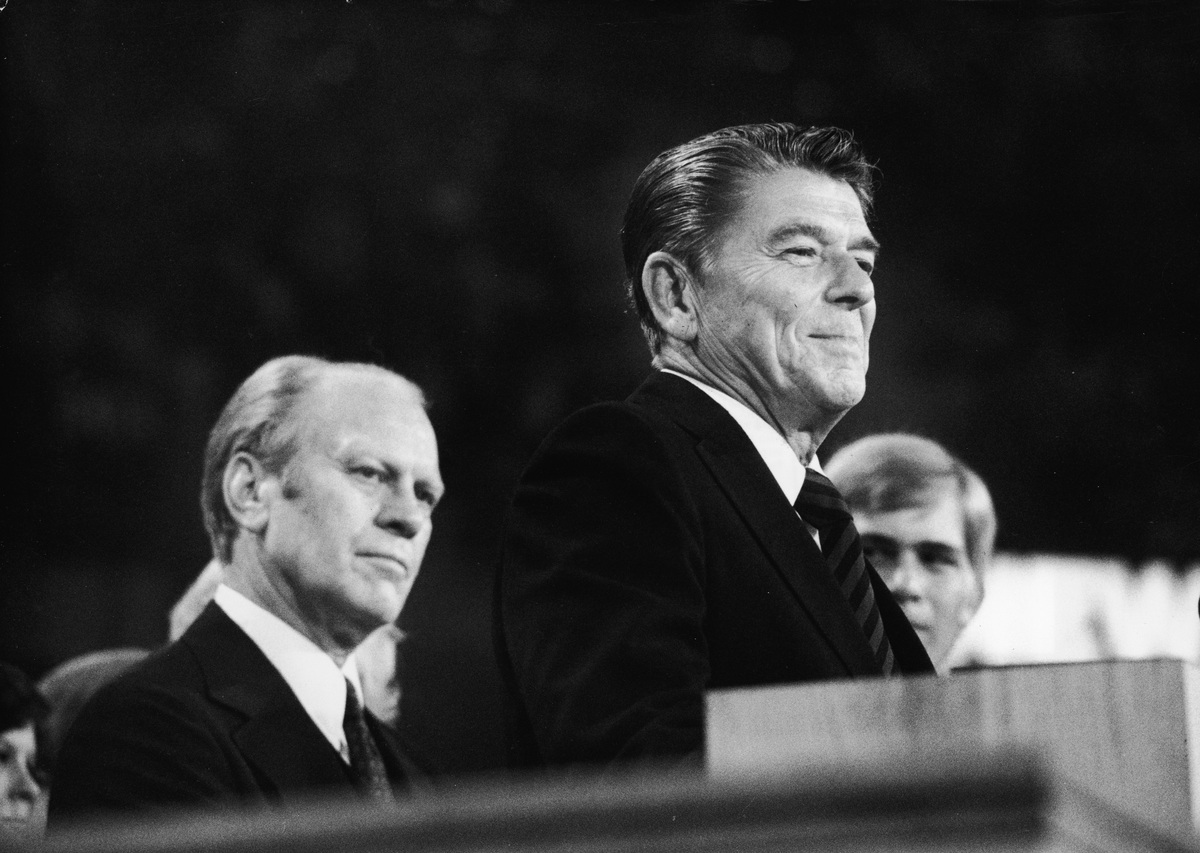 Yes, the race for the White House is about winning states, but really it's about winning delegates. In typical elections, the front-runner in a primary ends up being the person who snags the magic number of delegates to clinch the nomination so the convention ends up being pretty much a coronation ceremony.

But this year's Republican race for the nomination is shaping up to be something different.

Donald Trump is winning. And many in the party don't like that one bit. They're criticizing him, especially as we watch violence break out at Trump rallies. But at this point, they only have so many options to derail the Trump campaign, and opponents in the GOP are hoping his challengers, Gov. John Kasich and Sens. Ted Cruz and Marco Rubio, can just keep chipping away at his delegate count.

If they can, it'll make the Republican convention a lot more interesting, if history tells us anything.

The last time it all came down to the convention was for the Republicans in Kansas City. In 1976, President Gerald Ford went up against his challenger, former California Gov. Ronald Reagan.

Not unlike today, tempers raged and traditional rules were broken in the last-minute, two-man race for the nomination.

This week on For the Record: The 1976 Republican National Convention.

Ann Compton, then a young White House correspondent for ABC News, remembers the '76 convention as "a real battle."

"The party didn't know quite what to do with an incumbent president who hadn't been elected but had been appointed president, and a popular California governor who had tried to run before and was amassing huge numbers of delegates," she says. "The convention meant the climax to a party that had a kind of split personality."

Meanwhile, Stephen Hess was editor in chief of Ford's platform. He recalls the months leading up to the convention.

"If I remember correctly, the president, Gerald Ford, was winning, winning, winning from New Hampshire on, and then suddenly he hit a block in North Carolina and Gov. Reagan started to win, win, win. So suddenly they came into the convention almost tied," Hess says.

"People talk about how upset people are with Washington, but they were back then too, especially coming on the heels of the Watergate," Sears says. "There's a great deal of anti-Washington feeling."

So by the time the convention rolled around, Hess says, "they came to Kansas City ready to brawl."

It was a fight for each and every delegate. Gerald Ford was the sitting president, which meant he could sweeten the deals.

"I recall being behind the scenes in a Ford campaign kind of boiler room when the campaign delegate counters led by Jim Baker, later secretary of state, were befuddled by delegates who were asking for favors," says Compton. One was "a delegate from New York who wanted a federal judgeship for his brother — a serious request in return for his vote for Gerald Ford. He didn't get it."

Since the president had greater influence than Reagan, says Sears, they took the only power move they thought they had.

Reagan announced his plan to select the liberal Sen. Richard Schweiker of Pennsylvania as his running mate beforehand.

"They must have thought this was a very clever way of attracting liberals or centrists in the party," Sears says. Instead, "people like Jesse Helms of North Carolina were furious. And so it worked against him and then they compounded their errors."

After announcing a running mate, which in and of itself was unusual to say the least, the Reagan campaign then proposed a rule change requiring that Ford name his vice president pick, too.

And the Republican fight to retain the presidency, which had become a fight over the nomination, now boiled down to a fight over a rule change — yet another fault line in the '76 GOP.

Compton, who had been reporting from the convention floor, also remembers the heated Republican race to the finish.

"There were moments of incredible frustration and, yes, even physical altercations on the floor of the convention," she says.

But one moment stood out from the rest.

"That telephone was Nelson Rockefeller's lifeline to the command headquarters," she says. "This is how they coordinated. It was so crowded on the convention floor, you couldn't even walk over to another delegation so that shows just the extent to which tempers flared."

There were debates, handshakes and deals before a final vote that all came down to the state of Mississippi.

"Had Mississippi stayed with us instead of going as a block to Ford on the procedural question that we raised, I think we might have been nominated," says Reagan campaign manager John Sears. "But it was that close."

Ford scraped by with enough votes to win the nomination.

"Then of course in his generosity — he was a generous and kind person — they invited Ronald Reagan to come up and address the convention," says Compton.

Hess recalls it as "a marvelous little speech, which pretty much declared him as the next Republican candidate. And in that speech, praised the Republican platform as a 'banner of bold, unmistakable colors with no pale pastel shades.' "

As Compton recalls, the tone of the convention was a far cry from the tense moments leading up to the nomination.

"The Ford team was so relieved to have it resolved, to know that he would get his first and only chance to run a full campaign for president, that the idea of letting Reagan unite the party was appealing, and if he was more poetic than the more prosaic Gerald Ford, so be it," Compton says. "The delegates sitting in their chairs on the floor loved it."

Gerald Ford had won, and went on to lose to Democrat Jimmy Carter. Reagan may have lost the nomination, but went on to define the Republican Party for a generation.