Accessibility links
Book Review: 'As Close to Us As Breathing' By Elizabeth Poliner Elizabeth Poliner's book takes a familiar dramatic trope — the death of a child — and makes it the linchpin for an intricate tale that follows a close-knit family at a cultural turning point. 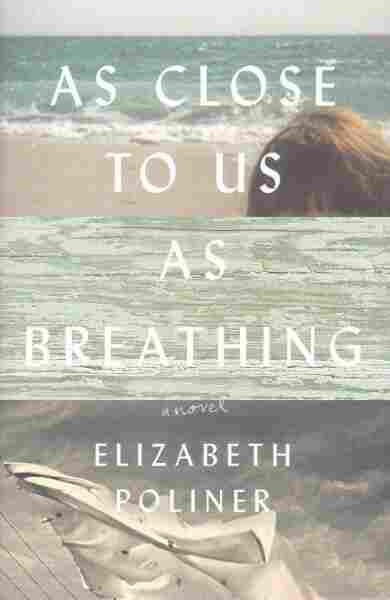 As Close to Us As Breathing

Title
As Close to Us As Breathing
Author
Elizabeth Poliner

There are books that keep you turning pages to find out what's going to happen, and others to find out how it happened. Elizabeth Poliner's beautiful first novel falls squarely into the please-tell-us-all-about-it group.

As Close to Us As Breathing snares us with its very first line: "The summer of 1948 my brother Davy was killed in an accident with a man who would have given his own life rather than have it happen." The death of a child has become an all-too-familiar dramatic ploy in literature — almost a sub-genre unto itself; but in Poliner's hands, it's the linchpin for a nuanced, intricate family drama that explores their tight culture at a turning point.

The novel gradually reveals the convergence of events that led to this catastrophic accident, and how it irrevocably altered the lives of every member of 8-year-old Davy's tightly knit extended family. His sister Molly, the narrator, was 12 at the time. The "man who would have given his own life rather than have it happen," was the adored Italian-American Good Humor man, who, always whistling, served the summer beach communities of Milford, Connecticut, including the Jewish enclave in Woodmont known as Bagel Beach.

As Close to Us As Breathing, which takes its title from a Jewish prayer, is the kind of novel you sink into blissfully. It casts a spell. Poliner vividly paints a less congested but more restricted mid-twentieth century world, and her characters seem so real, so multi-dimensional, so sympathetic even when they mess up that you have to shake yourself back to the present each time you put down the book.

Poliner's novel is about family ties, about belonging, about identity and responsibility to one's family and religion. It captures a time when it was not generally accepted for American Jews — however hopeful after the Nazis' defeat and the new statehood of Israel — to marry outside their faith, belong to certain clubs, or even frequent restricted resorts, "a kind of segregated ethnic tribalism that for us was part necessity, part comfort," Molly reflects half a century later. She evokes the insulated, rigidly segregated, patriarchal culture of her childhood, in which men attended morning minyan services and women frantically prepared for Shabbos every Friday, rushing to clean the house, scrub the children, bake the challah loaves and roast the chicken before sundown.

'As Close to Us As Breathing,' which takes its title from a Jewish prayer, is the kind of novel you sink into blissfully. It casts a spell.

Molly is the middle child and only daughter of headstrong Ada, in turn the middle of three sisters who together inherited their parents' summer cottage on Bagel Beach. All three sisters gather with their families every summer, falling into old patterns. Ancient grievances reverberate: Ada, the family beauty who at 17 stole Mort Leibritsky from her older sister, Vivie; Mort, who feels he owes it to Vivie to hire her frail husband at his family department store in Middletown, Connecticut; the constant sparring between Ada's cocky firstborn and Vivie's brainy but socially uncomfortable only child, as if they've taken their mothers' feuds to the next generation.

Disappointment in love runs through this family like a rogue gene. Worse, especially in the wake of their guilt following Davy's death, they question their very entitlement to happiness. The youngest sister, Bec, overcomes several romantic setbacks that would fell a less stalwart soul, beginning with her fiancé's brutal announcement that he'd found someone more like him in college, "the educated kind." Bec is a wonderful character, one of several whose self-discovery and struggles with forbidden love make for terrific reading.

Although largely character-driven, As Close to Us As Breathing is a marvel of artful storytelling. Poliner wows us repeatedly with her agility at shifting between various timeframes and plotlines. Again and again, she jumps ahead years to spill her narrative beans fistfuls at a time, surprising us with advanced news of marriages, divorces, deaths, and career turns. But she always holds back enough to avoid sabotaging her story's momentum, leaving us eager to fill in the blanks.

The novel is suffused with ruminations about how "very, very small" and sadly insignificant a single human life is in comparison to the 14 billion year "chasm of time" between its span and that of the vast universe. Yet Poliner also reminds us — exquisitely — that "the human heart was its own inexplicable and expansive universe," and that "a single life, however small," actually does matter and mean quite a bit.