Accessibility links
Election 2016: Bernie Sanders Says He's Beating Donald Trump. Is He Right? Candidates love to cite these polls, but not every pollster thinks they're useful. The election is still eight months away. So, when will everyone agree it's time to pay attention to hypotheticals? 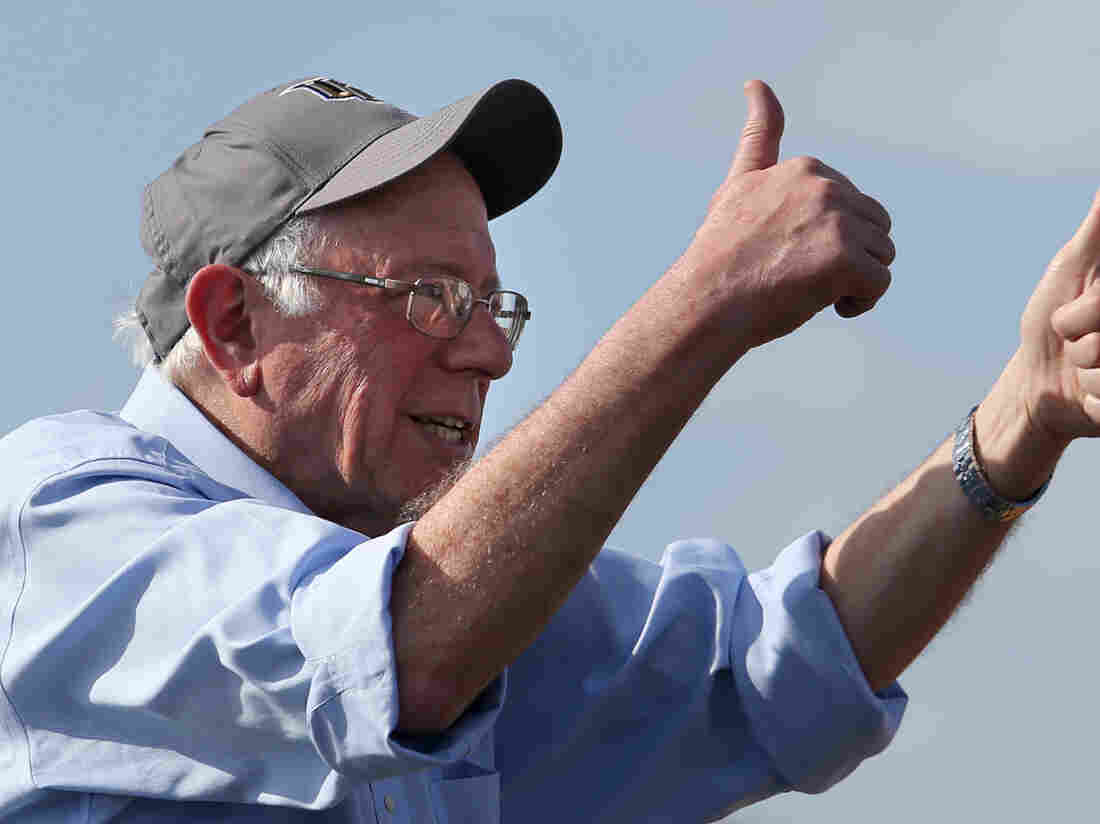 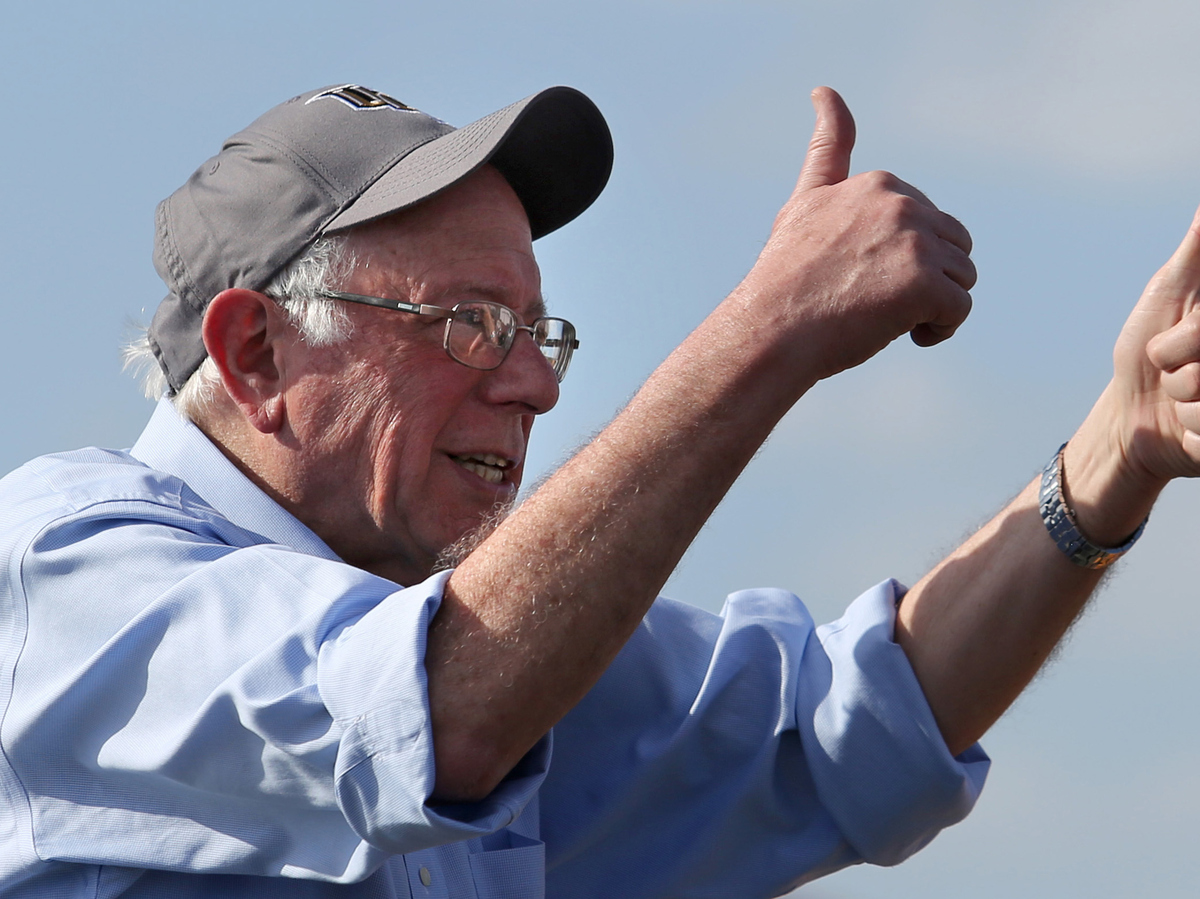 "I beat Hillary — and I will give you the list — I beat Hillary in many of the polls that have been taken," he said at last Thursday's Republican debate. "And each week, I get better and better."

"Not all, but almost every poll has shown that Sanders versus Trump does a lot better than Clinton versus Trump," Sanders said at the Democratic debate in Flint, Mich., last week.

Sanders and Trump appear to be referring to head-to-head polling questions, in which pollsters give respondents hypothetical general election matchups. Here's how Quinnipiac asked these questions in a recent poll of registered voters nationwide: "If the election for President were being held today, and the candidates were Bernie Sanders the Democrat and Donald Trump the Republican, for whom would you vote?"

Candidates love to cite these polls, but not every pollster thinks these data are useful.

"When you get somebody on the phone, they'll answer your questions. The real issue is whether they really are considering their answer to that question," says Patrick Murray, founding director of the Monmouth University Polling Institute. "And when it comes to those hypotheticals, they're not."

The problem, he says, is that primary voters are not general election voters. And those general-election-only voters just aren't thinking about the election as seriously yet as those who are voting right now.

"Voters really don't think of this as a realistic possibility until it becomes clear who the nominees are going to be," Murray said. "Even at this point, where it seems like both Trump and Clinton are on a trajectory, we can ask this question in polls, but really people aren't going to give a considered answer to it."

He gave the example of a voter who supports Marco Rubio right now and doesn't really like Trump or Ted Cruz. Given the choice between Cruz and Clinton right now, that voter might be so opposed to Cruz — especially during a bitter primary fight — that she would pick Clinton.

However, once the decks are cleared and both parties have their candidates in the general election, that voter might easily decide to stick with her party and choose the Republican.

Monmouth, where Murray works, does do a form of hypothetical questions — just this week, for example, they released a poll in which they asked likely Ohio primary voters different combinations of Republican and Democratic nominees. But, Murray says, the key difference is that this is about "partisan primary voters," not all voters.

The bottom line: If Sanders or Trump (or any other candidate) is referring to head-to-head poll questions asked of registered voters nationwide, there's a lot of room for skepticism.

Of course, other major polling outlets do these polls, and they see good reason for it.

"We do them for the following reason: It gives us comparisons," says Peter Brown, assistant director of the Quinnipiac University poll. "Because not only do we do 'who are you going to vote for' questions in these polls; we also ask favorable-unfavorable questions."

The data on who is considered "unfavorable" and — given that information — who would vote for or against them in different general election candidate combinations is useful knowledge, he said. He also adds that looking at the matchups over time, especially with demographic breakdowns, can show where candidates are in particular losing or gaining ground.

Either way, voters should be wary when candidates talk about any poll results. For one thing, it's easy for candidates to cherry-pick the poll that favors them and ignore others. Also, national polls can be misleading because they don't capture the important state-by-state information of how voters feel — and state-by-state, by the way, is how people vote (and how delegates are allocated).

And finally, polls are snapshots. They capture how people feel right now, not how they will feel on Nov. 8.

That's why it's important, he says, that Quinnipiac's hypothetical questions note "if the election were held today."

But then, the election isn't today (sick as you may be of campaign ads and debates). So if it's eight months away, when will everyone agree that it's time to start paying attention to the hypothetical polls?

It could be very soon. After the delegate-heavy March 15 contests, Murray said, he will start performing general election head-to-head polls with the candidates who are left standing. Winnowing the field could make some voters think harder about whom they'd support.

"The probability of the outcome has to be rather high (whatever is slightly shy of inevitable) before voters really flip on the mental switch that says, 'Yup. I'm going to have to pick between these two, so I might as well start giving it some serious thought,' " he said in an email.

So after that, maybe it will be time to pay attention. But if Trump, Sanders, Clinton or whoever start citing these polls in their Tuesday-night victory speeches, it might be best to tune them out.