Accessibility links
Election 2016: Why Both The Democratic And GOP Races Are Probably Going To June The delegate races on both sides are tight. For Republicans, their crowded field is splitting up the votes. For Democrats, the calendar could favor Bernie Sanders over the next several weeks. 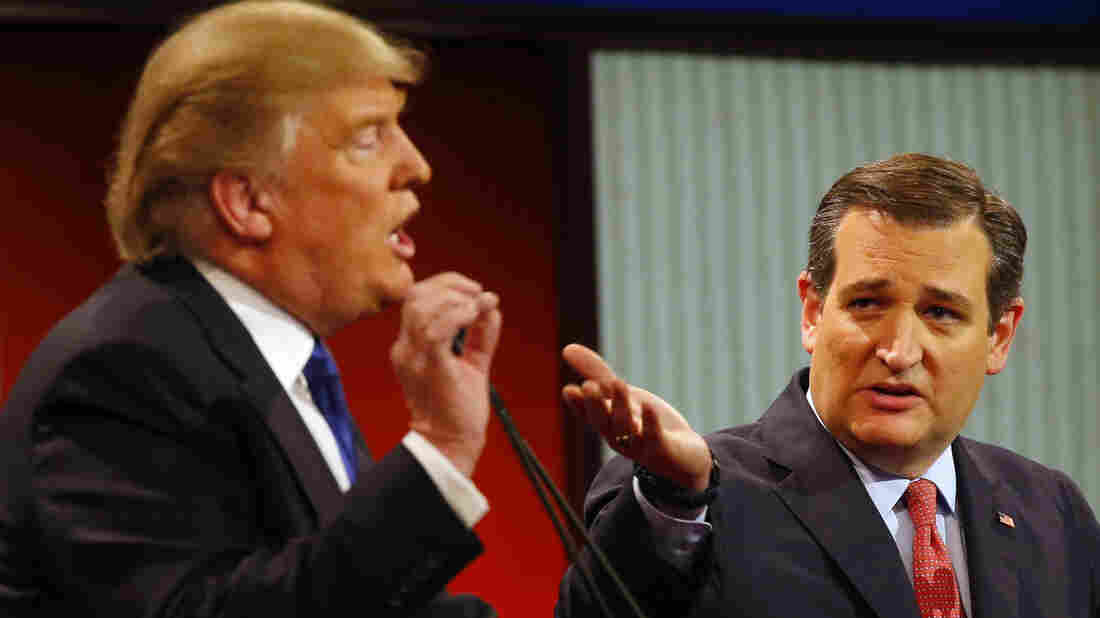 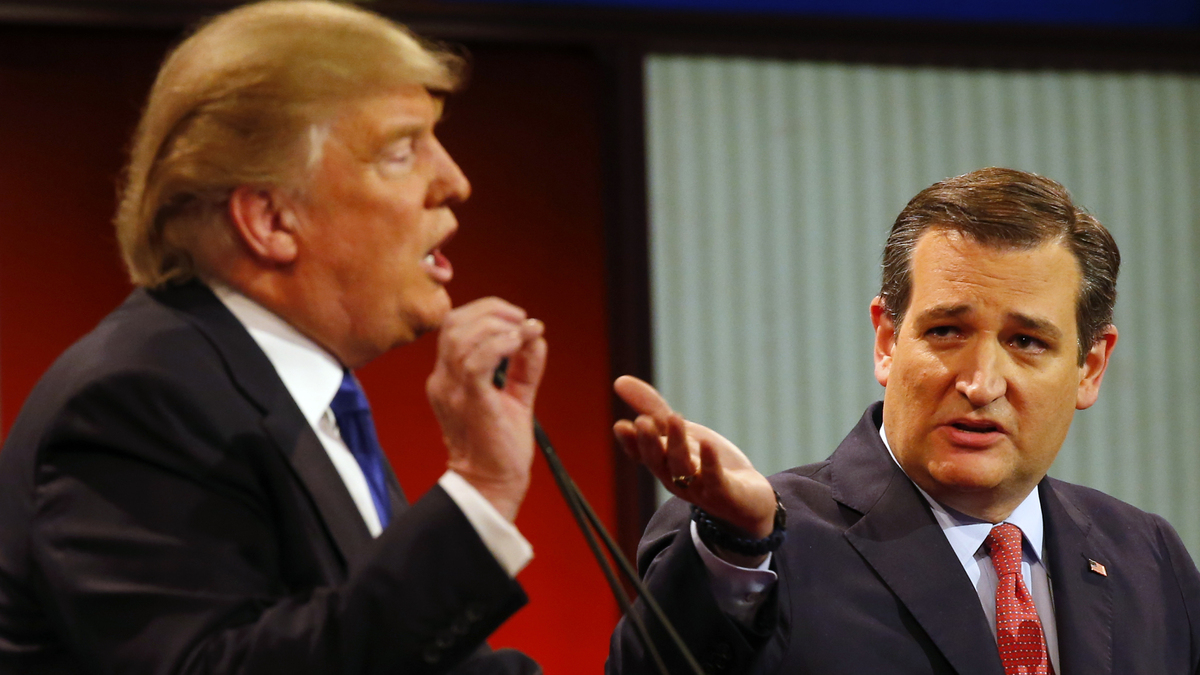 Donald Trump and Ted Cruz argue a point during a Republican presidential primary debate in Detroit earlier this month.

This has been an unpredictable primary season, but one thing is becoming increasingly clear: This race, on both sides, is going to go on for a while.

For Republicans, because of how the vote has been split up, no one will have the required delegates to be the nominee until — at the earliest — their very last nominating day, June 7. That's true even if Donald Trump sweeps the big winner-take-all states Tuesday, although the direction will be very clear if that happens.

For Democrats, Tuesday will be pivotal. If Bernie Sanders wins at least two states and comes close in Ohio, though Hillary Clinton would undoubtedly have the advantage, his campaign sees a path — albeit very narrow — to winning a majority of the pledged delegates. It hinges on doing well — almost running the table — over the next six weeks, including big wins in Arizona, Washington state, Wisconsin, New York, New Jersey and California.

Republicans — What could happen Tuesday? 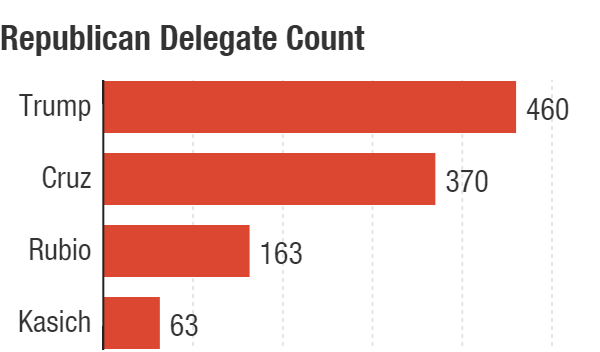 If Trump wins both, he needs 49 percent of all remaining delegates. It would almost certainly mean he goes into the convention with the most delegates. That's because everyone else would need even more than he would. Ted Cruz would need 69 percent, Marco Rubio 85 percent (and he would have almost certainly dropped out after losing his home state), John Kasich 93 percent. Rubio and Kasich would all but be mathematically eliminated, something that would happen in only a matter of weeks.

But because of all the vote that's been split up already, this doesn't guarantee Trump gets a majority heading into the convention.

OK, let's assume he wins Ohio and Florida. When could Trump get a majority? 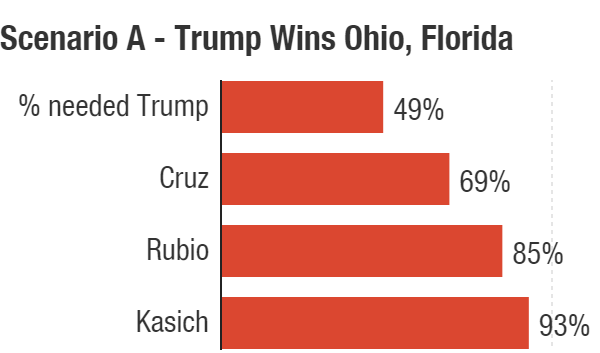 Let's go even further. Give Trump Ohio, Florida and even Missouri on Tuesday, which is a mix of winner-take-all statewide and by congressional district. Then give him half the delegates of every contest after Tuesday. Mind you, before Tuesday, he has won a majority in only six of the 26 contests that have taken place. Then, there are three more purely winner-take-all contests before now and June totaling 116 delegates — Arizona, Delaware and Nebraska. Give him all of those. That would take him to roughly 1,100 delegates, give or take. That would still be short of the magic number of 1,237. He called this number "very random" at the most recent GOP debate. But it's not random at all — it's a majority of the total voting number of Republican delegates to the Republican National Convention in Cleveland this July.

So all of this means the earliest Trump would likely clinch is June 7, when California, Montana, New Jersey, New Mexico and South Dakota vote. He could go into that day 100 to 150 delegates or so short of the magic number and would need half of the 303 delegates up for grabs that day. He would need some combination of the winner-take-all states of New Jersey (thanks, Chris Christie), South Dakota and Montana and/or a significant share of California's.

Scenario B — Trump loses both Florida and Ohio 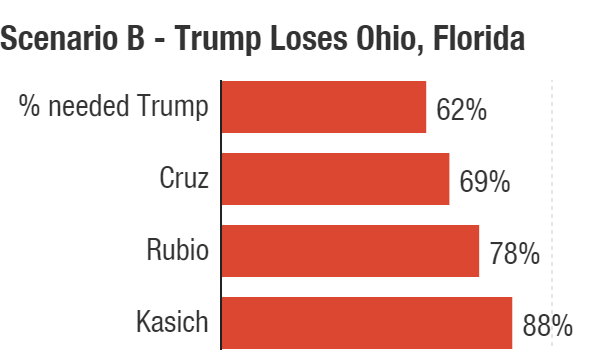 This scenario assumes that Marco Rubio and John Kasich hold onto their home states of Florida and Ohio, respectively. Domenico Montanaro/NPR hide caption

If he loses both, he and the party are in a very precarious situation. Losing both states, Trump would need 62 percent of what's remaining. But every other candidate would be even worse off — unless Cruz won both states, which is unlikely. If Cruz did win both states, he'd vault into the lead but still would need 56 percent of all remaining delegates to get a majority before Cleveland.

Putting Cruz aside, if Kasich and Rubio split their respective home states, Trump would still be in the lead but would need a whopping 62 percent, Cruz 69 percent, Rubio 78 percent and Kasich 88 percent. Rubio and Kasich would only be weeks away from being mathematically eliminated.

And we'd likely be headed to the first contested convention in 40 years on the Republican side and possibly the first brokered in almost 70. 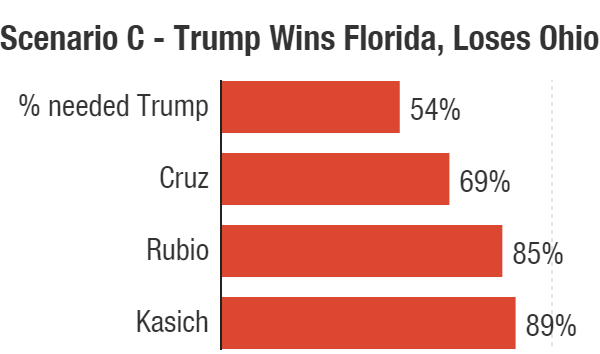 This is a very possible scenario out of Tuesday given the current polling. We would be basically right back where we started the day. Trump would need 54 percent of all remaining delegates, Cruz 69 percent, Rubio 85 percent and Kasich 89 percent.

In this scenario, Rubio loses Florida, and his candidacy is likely over. Kasich would still have only a matter of weeks until he's mathematically eliminated.

Democrats — What could happen Tuesday? 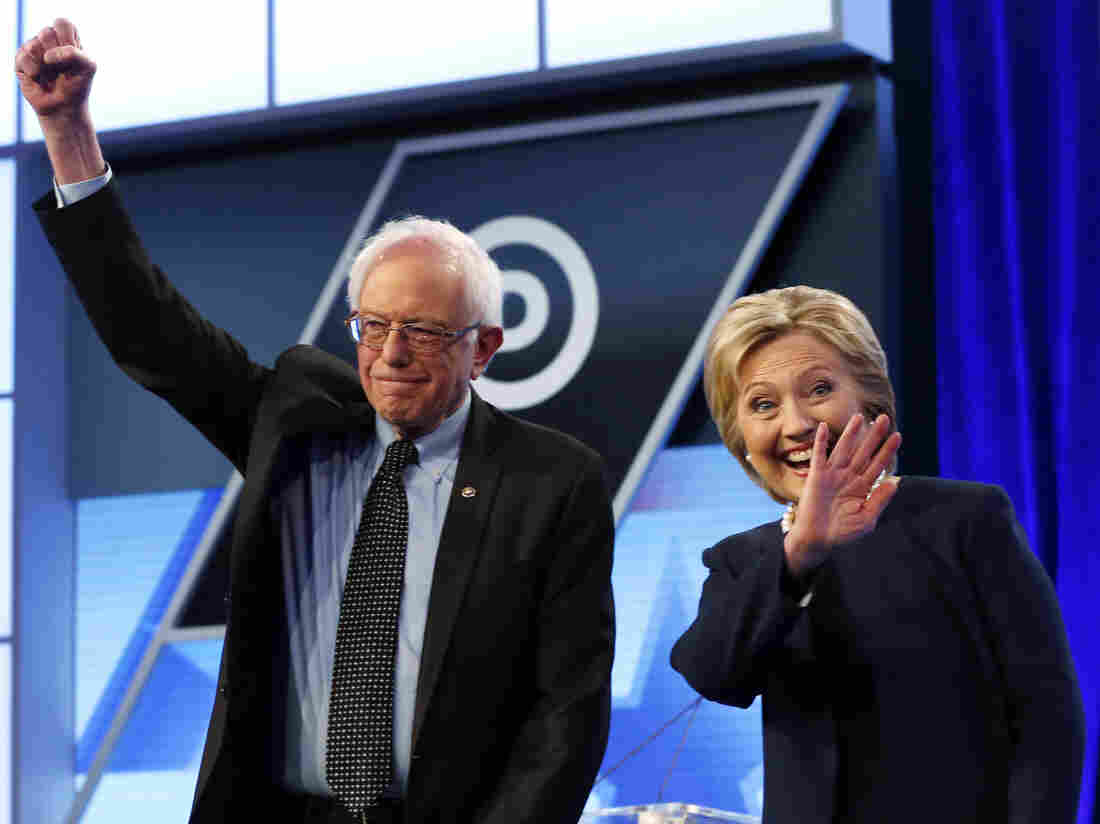 Bernie Sanders and Hillary Clinton stand together Wednesday before the start of the Democratic presidential debate at Miami Dade College in Miami. Wilfredo Lee/AP hide caption 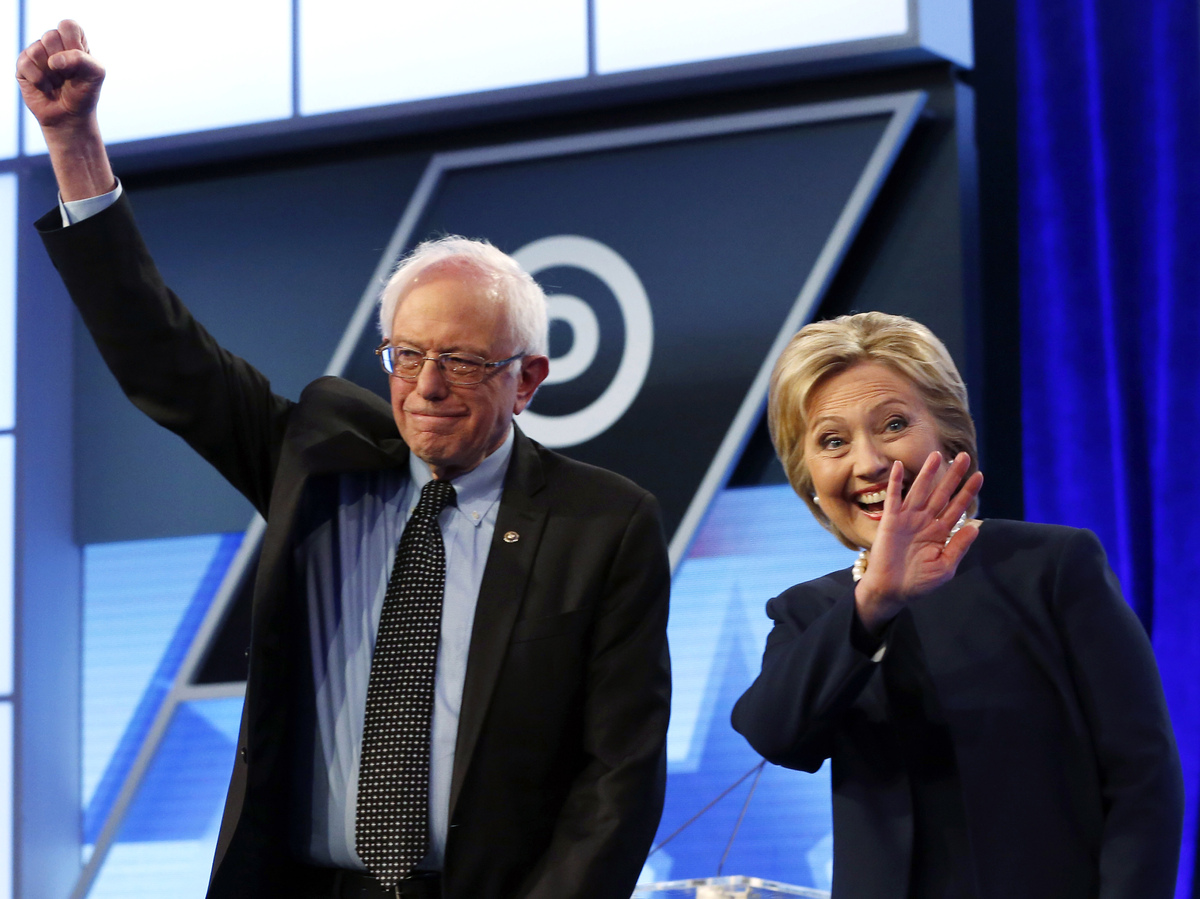 Bernie Sanders and Hillary Clinton stand together Wednesday before the start of the Democratic presidential debate at Miami Dade College in Miami.

Scenario A — Good day for Clinton: Wins big in Florida and North Carolina, ekes out Ohio 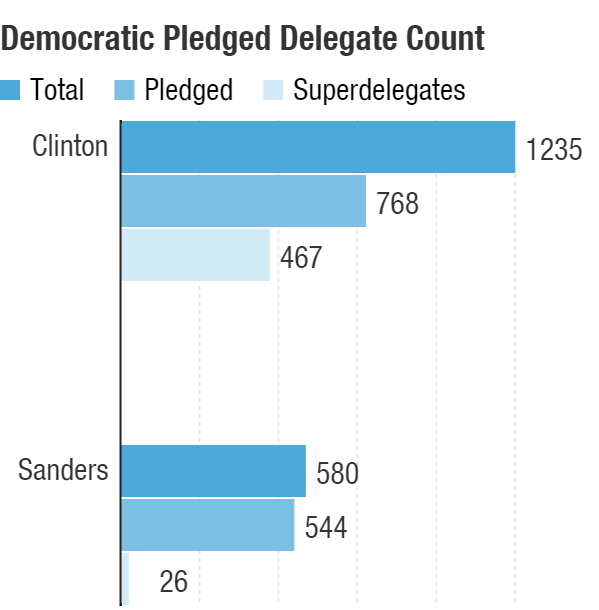 Hillary Clinton has a large lead in total delegates, fueled by her enormous lead with superdelegates, unpledged party elected leaders and officials who can vote at the convention however they want. Domenico Montanaro/NPR hide caption

Clinton is favored in Florida and North Carolina, and by big margins. Winning there with 60 percent of the vote and then losing in Illinois and Missouri 52 to 48 percent and winning in Ohio by the same margin, Clinton would have a very good delegate day. She would net nearly another 60 delegates and need just 43 percent of all remaining delegates for the pledged majority with just 29 contests to go. Sanders would need 57 percent of all remaining delegates. Though the calendar lines up for him well over the next several weeks, that would be very difficult to overcome. And none of that is counting superdelegates, who are overwhelmingly with Clinton — for now.

When could Clinton win a majority of delegates?

Staying with her best outcome on Mega Tuesday, with superdelegates factored in, Clinton likely wouldn't be able to wrap up the nomination until June 7, when California votes.

Welcome to a world in which the Sanders campaign can plausibly make the case that he has a (narrow) path to win a majority of pledged delegates by the end of June. In this scenario, Sanders wins the day by one delegate, winning Missouri 60 to 40 percent, Illinois 55 to 45 percent, Ohio 54 to 46 percent and holding Clinton to 55 percent in Florida and 59 percent in North Carolina. Sanders would find himself further behind than when the day began, needing 55 percent of all remaining delegates, and this is where the race gets interesting. His campaign believes it's come through the toughest stretch and the next several races line up Sanders' way.

OK, so what's that path look like? Because Democrats hand out delegates proportionally, he would have to virtually run the table in every big state and small caucus, starting with Arizona on March 22. It's no mistake that Sanders is in Phoenix on Tuesday night, rather than in one of the places he might (or might not) win that night. He would also have to win decisively in Washington state (March 26), Wisconsin (April 5), New York (April 19), Kentucky and Oregon (May 17), New Jersey and California (June 7).

California could be key. In one analysis run by NPR, Sanders was down 92 delegates going into June 7, but with a 60-40 win in California, which has 475 delegates, Sanders was able to pull ahead. Here's one estimate that has fairly narrow margins that shows Sanders pulling off a two-delegate win. Some might take issue with Sanders winning Maryland given its high share of black voters, but it's one example.

Some other contests to watch: Pennsylvania (April 26), Indiana (May 3) and West Virginia (May 10). Oh, and remember those caucuses that don't really hand out delegates that night but at county and state conventions? The Sanders campaign is contesting each of those, fighting for delegates, hoping to pick up more delegates than Election Night media estimates.

One potentially dangerous scenario: If superdelegates hang with Clinton, even in the most rosy Sanders scenario, she would surpass the magic number of 2,383 just on or before June 7. That's right when, in this same scenario, Sanders would take the pledged-delegate lead.

One thing's for sure: With the coalitions both of these candidates have put together, nothing will be easy.