Accessibility links
Merrick Garland Has A Reputation Of Collegiality, Record Of Republican Support Merrick Garland, a judge with 18 years' experience, was not the first choice of liberals. But President Obama hopes his ability to win over conservatives will extend to the Supreme Court. 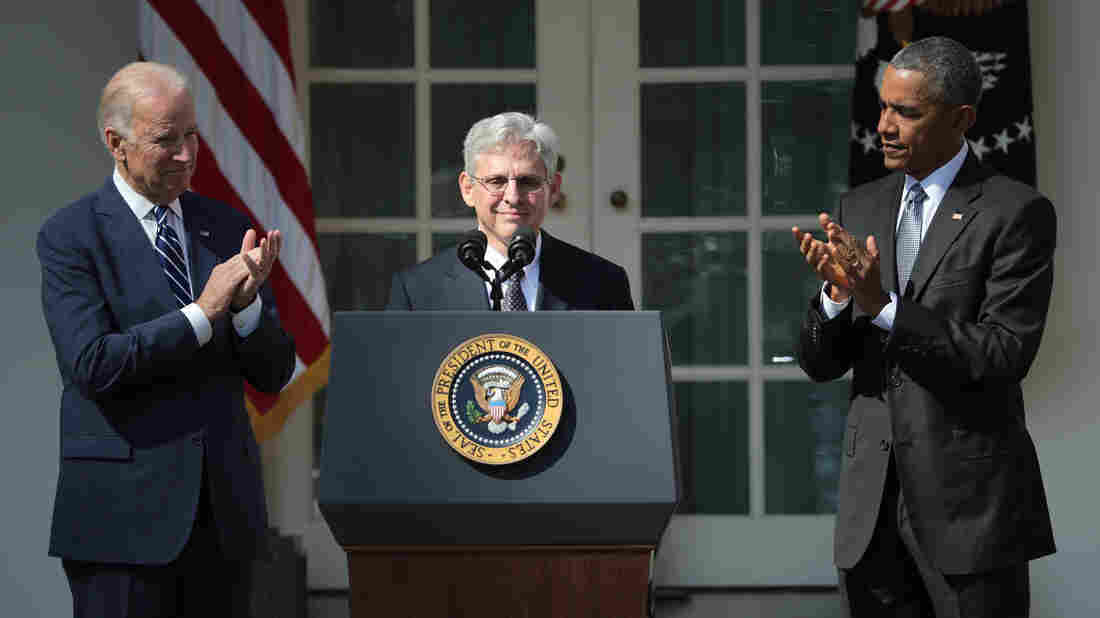 President Obama and Vice President Biden stand with Judge Merrick B. Garland as he is nominated to the U.S. Supreme Court on Wednesday at the White House Rose Garden. Chip Somodevilla/Getty Images hide caption 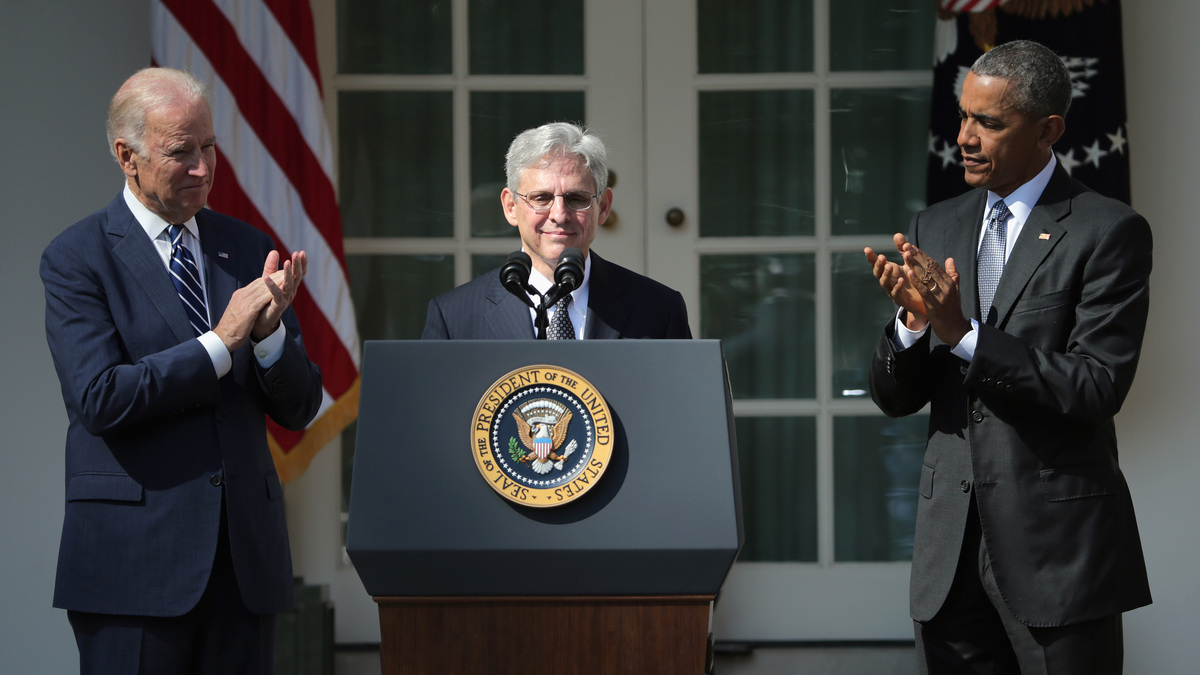 President Obama and Vice President Biden stand with Judge Merrick B. Garland as he is nominated to the U.S. Supreme Court on Wednesday at the White House Rose Garden.

President Obama's choice to serve as the newest Supreme Court justice is Merrick Garland, a moderate federal appeals court judge and former prosecutor with a reputation for collegiality and meticulous legal reasoning.

Garland, who has won past Republican support, has "more federal judicial experience than any other Supreme Court nominee in history," a White House official said. "No one is better suited to immediately serve on the Supreme Court."

Garland is the latest judge from the federal appeals court in Washington to be promoted to the current Supreme Court. If confirmed, he would join Chief Justice John Roberts and Justices Ruth Bader Ginsburg and Clarence Thomas, all of whom served on the D.C. appeals court before being elevated. So did the late Antonin Scalia, who died last month after nearly 30 years on the nation's highest court.

The selection of Garland, 63, could disappoint avid liberals, who wanted Obama to pick someone who would "take on" the court's conservatives in much the way they say Justice Scalia took on the court's liberals and moderates. And the choice of Garland, a white man who attended Harvard Law School, could also dismay advocates who had hoped for a more diverse candidate from the African-American or Asian legal communities.

But Garland, who currently serves as the chief judge of the nation's second highest court, takes care to emphasize his humble roots. During summer breaks in college, he worked as a shoe store stock clerk, and he sold his comic book collection to help pay his tuition.

As late as last week, Republicans like Utah Sen. Orrin Hatch offered praise for Garland, though it's far from clear whether he and Senate leaders will budge on their determination to avoid hearings or votes on any nominee until a new president takes office in 2017.

Garland has a lengthy record on the D.C. circuit court, but that court deals mainly with regulatory issues and not hot-button social issues of the day, such as abortion and gay rights. That has served as a confirmation advantage for previous nominees from the appeals court, and it likely will for Garland, too. Republican interest groups such as the Judicial Crisis Network signaled they would take issue with his vote to rehear a case over D.C.'s tough gun restrictions.

Garland grew up in the Chicago area. His mother, Shirley, was a director of volunteer services, and his father, Cyril, ran a small business out of the basement of the family home, advertising area clothing stores. Garland went to public schools and was valedictorian of his high school class in Skokie. From there, it was on to Harvard College, on scholarship, where he graduated first in his class. At Harvard Law School, he was an editor on the Law Review.

He is married to Lynn Rosenman, an engineer whom he met in Boston while she was getting a master's degree in physics at MIT. Rosenman's grandfather springs from Democratic Party royalty, having advised Presidents Franklin Roosevelt and Harry Truman. The Garlands have two daughters.

If confirmed, Garland would be the fourth Jewish justice, along with five Catholics also serving. There hasn't been a Protestant on the bench since 2010.

In 1979, he served as a special assistant to Attorney General Benjamin Civiletti. With the switch in administrations in 1981, he joined the large Washington law firm of Arnold & Porter, becoming a partner four years later. While in private practice, he did corporate litigation and also taught antitrust courses at Harvard Law School.

But Garland longed to return to public service and wanted more experience in the rough and tumble of trial work. So in 1989, he joined the U.S. attorney's office in Washington, D.C., as a line prosecutor, trying cases that ranged from drug trafficking to complex public corruption charges.

In 1993, he joined the newly installed Clinton administration as deputy assistant attorney general in the Justice Department's criminal division. A year later, Deputy Attorney General Jamie Gorelick, the department's second in command, asked Garland to be her principal deputy. She said she chose him because he had "the perfect background," having worked in the department at both high and low levels. Moreover, says Gorelick, "He had shown himself to be a brilliant lawyer with excellent judgment, utterly without any political agenda, other than to do right."

A String Of Bombing Cases

Garland was soon put to the test. He supervised the investigations into the Unabomber and the Oklahoma City and Atlanta Olympics bombings, among others. In the Oklahoma City case, he not only headed the investigation but also put together the trial team that prosecuted Timothy McVeigh, winning praise from the state's Republican Gov. Frank Keating.

Gorelick says one of the Garland traits she treasured was his instinct to "question the received wisdom" and not to jump to conclusions. That paid off again and again, she says, when initial evidence seemed to point in one direction in major cases, only to evaporate on later inspection.

Clinton appointed Garland to the U.S. Court of Appeals in 1995. After a long Republican stall in the Senate that lasted 19 months, he was confirmed by a vote of 76-23.

A Moderate But Persuasive Liberal

On the appeals court, Garland has been a moderate liberal, with a definite pro-prosecution bent in criminal cases. Indeed, his views in the area of criminal law are considerably more conservative than those of the man he would replace, Justice Antonin Scalia.

But Garland also has been a persuasive voice for liberals, managing to bring conservatives over to his side on issues ranging from the environment to national security. For example, in a case involving Chinese Uighurs detained at Guantanamo Bay, Cuba, Garland asked the Justice Department for the particulars of its evidence and then wrote an opinion for himself and two conservative judges that concluded that the Bush administration's claim that they were enemy combatants was utterly unsupported by the evidence.

So respected is Garland as a judge that Chief Justice Roberts, at his confirmation hearing, answered a question about one of his majority opinions by noting that Judge Garland had dissented and, said Roberts, "Anytime Judge Garland disagrees, you know you're in a difficult area."

An earlier version of this story was published prematurely and included some out-of-date details. We wrote that if Garland were confirmed, it would be the first time there would be no Protestants on the Supreme Court. In fact, there has not been a Protestant justice since John Paul Stevens retired in 2010. Also, the photo caption originally referred to "retiring Justice John Paul Stevens," as if his departure was about to happen.