Accessibility links
Before Flint, Lead-Contaminated Water Plagued Schools Across U.S. Schools all over the country, not just Michigan, have struggled to eliminate lead from water fountains and cafeterias — some for more than a decade. 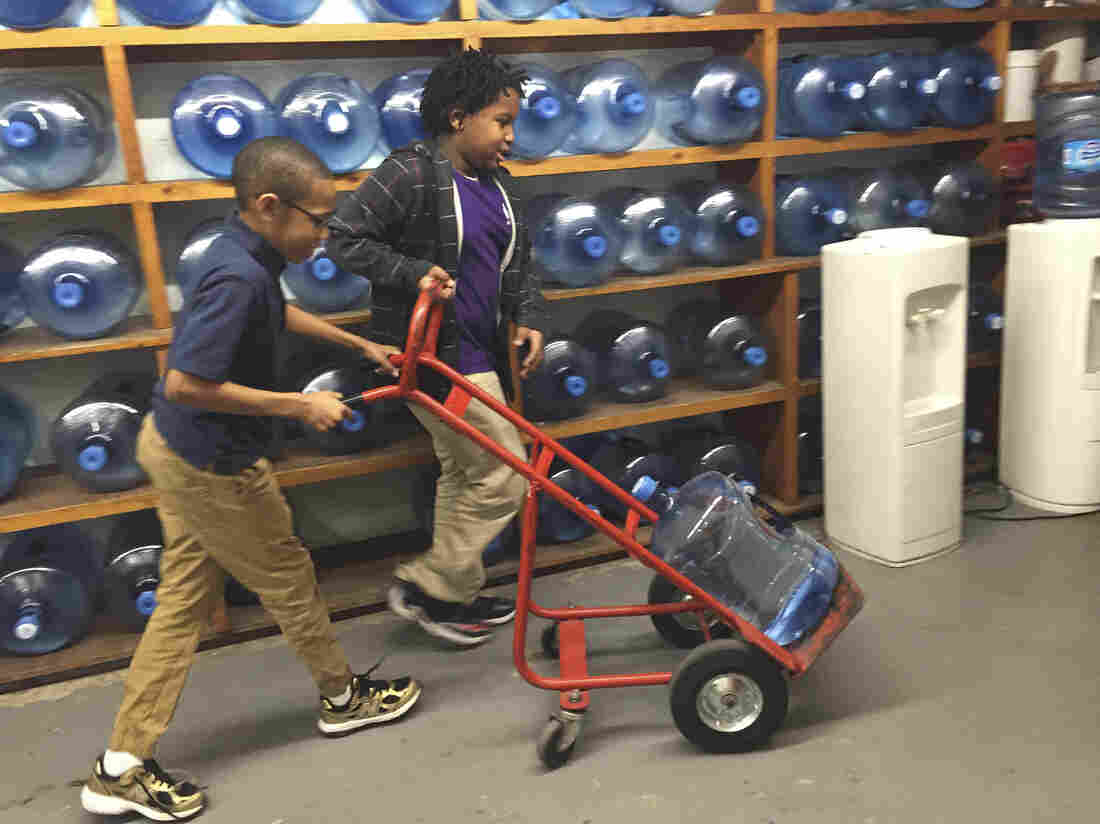 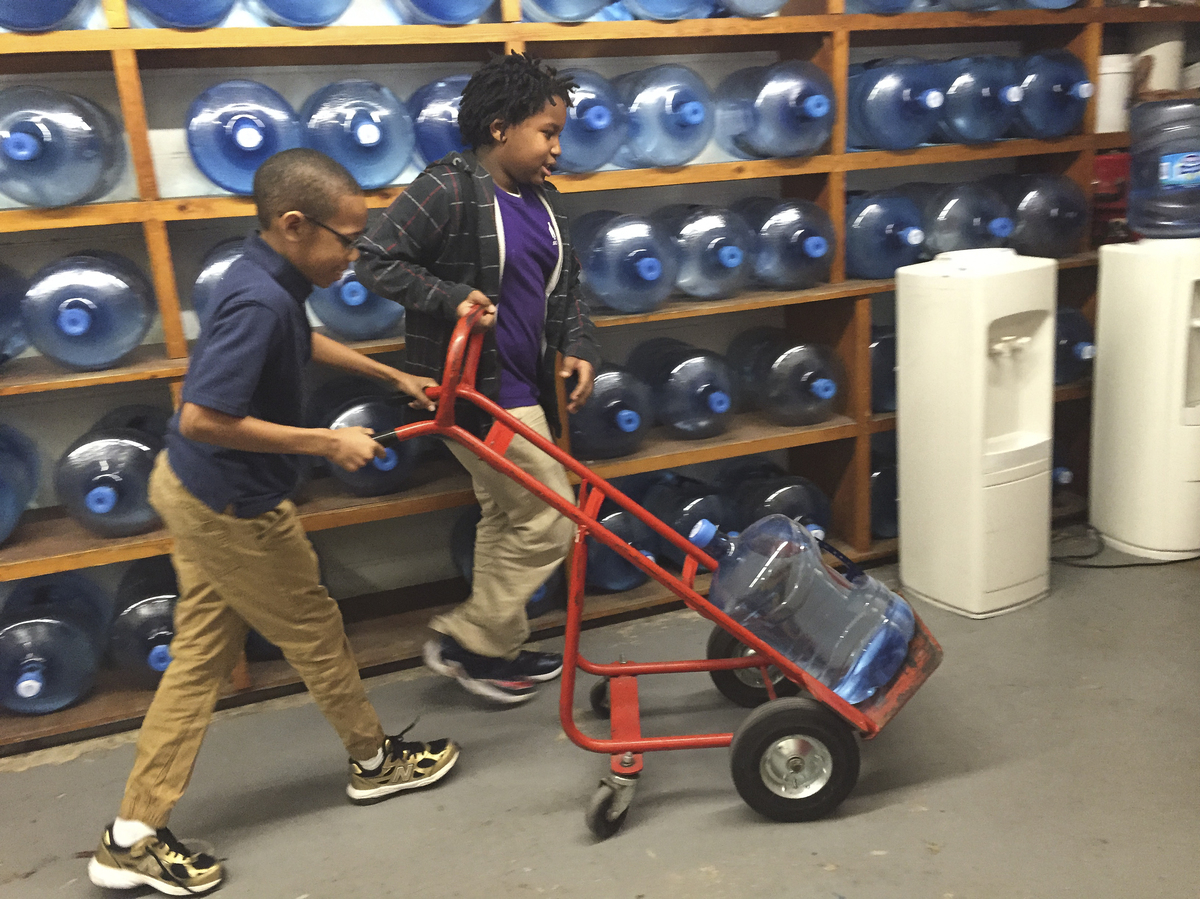 Third-graders Ezekiel White (right) and Emanuel Black push a jug of water to the cafeteria at Southwest Baltimore Charter School.

"We don't use the water from the building for cooking, not at all," say cafeteria worker LaShawn Thompson, shaking her head.

Her colleague, Christine Fraction, points to a large water bottle sitting on the counter of a stainless steel sink.

"We having greens or something like that, we having vegetables, we'll just turn it over into the pan and then put it on the stove," she says.

Throughout the school, water fountains are turned off. In the storeroom, an entire wall is stocked to the ceiling with water bottles.

"It's safety first," says Erika Brockman, the school's executive director. "It's not the best solution. But in the short term, I completely understand why the district is approaching the problem this way."

When Can Water Fountains Be Turned On Again?

Bottled water has actually become a long term solution in Baltimore. The city first found elevated lead levels in scores of schools in 1992. That was a few years after the EPA discovered a problem with lead-lined water fountains and required schools to address it.

Baltimore ordered contaminated fountains turned off. But a decade later, a crusading father whose daughter had elevated lead levels took it upon himself to test fountains at a dozen schools. He found many that had been ordered shut down were back in service.

The city health commissioner at the time suggested that new principals were unaware of the lead contamination. The city vowed to fix the problem and again, found it easier said than done.

"They decided that protecting children from lead in drinking water was such a gargantuan task and almost impossible unless they had the ability to replace every single lead-bearing plumbing," she says.

The city decided that was too expensive. In 2007, the entire school district switched to bottled water.

Baltimore City Public Schools declined to talk about that decision, but at the time said spending $675,000 a year on bottled water was the most cost-effective solution.

With no testing since then, Brockman says she doesn't actually know whether her school's water is unsafe. She hates the environmental waste of all the plastic water bottles and waxy paper cups. She says she has wondered whether the school should do its own test and go back to its faucets and fountains.

"But it's really scary to do that given everything that's going on," she says. "And I don't want my students to be the guinea pigs for this."

In fact, across the country, it's hard to know whether there's lead in school water. Lambrinidou says for the vast majority of schools, there is no requirement to test for lead. Even if a school finds lead, there's no mandate to fix it or tell parents.

"What we see again and again is that the people who first discovered the contamination were parents whose children were diagnosed with elevated blood lead levels," Lambrinidou says.

Three times over the past decade, she says, Congress has declined to pass legislation that would have required schools to test for lead and make the results public.

Lead Pipes Are Not The Only Culprit

In 2008, tipped off by a parent, NBC4 Los Angeles found local schools with lead levels hundreds of times above what the federal government deemed safe. The district promised to beef up its longstanding policy of flushing water fountains each morning to wash out lead that had built up overnight. But when NBC4 followed up last year, its hidden cameras captured custodians walking past fountains without flushing them.

Daily logs had also been inaccurately filled out to say that flushing had been done.

"It was a very idealistic, complicated process that we had, and sometimes it's hard to live up to those idealistic standards," says Mark Hovatter, chief facilities executive with the Los Angeles Unified School District.

He says the district has again stepped up its flushing. But a bigger challenge, he says, is that getting rid of lead in water is incredibly complicated. LA Unified doesn't even have lead pipes.

"Our greatest percentage of fountains that do have higher concentrations [of lead] than we would like come from brand new schools," he says.

LA Unified has discovered that the low-maintenance brass fittings it chose for the bubblers on new water fountains can leach lead. The district has also learned not to place water fountains on the far side of playgrounds, away from the main building. Because they require smaller pipes, and don't get used as often, Hovatter says more lead is likely to build up in the water.

The Los Angeles school board recently allocated $20 million to fix both issues. Hovatter predicts that in 18 months, the district will no longer have to rely on flushing fountains to keep lead levels down.

Baltimore and Los Angeles are not the only cities dealing with this problem: In recent weeks, officials have issued warnings after finding elevated lead levels at schools in Washington, Ohio, upstate New York and New Jersey.