Accessibility links
'The People Vs. O.J. Simpson' Gets To The Gloves The FX series has been surprisingly compassionate to most of its subjects, and Christopher Darden on the day he forces a courtroom demonstration he will regret is no exception.

'The People Vs. O.J. Simpson' Gets To The Gloves

'The People Vs. O.J. Simpson' Gets To The Gloves 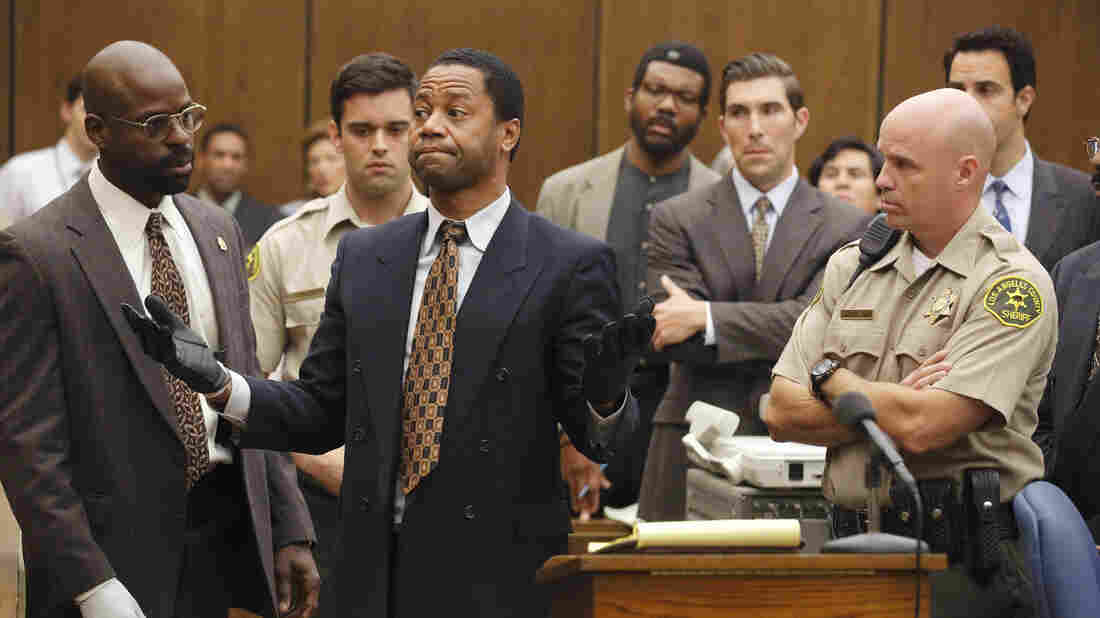 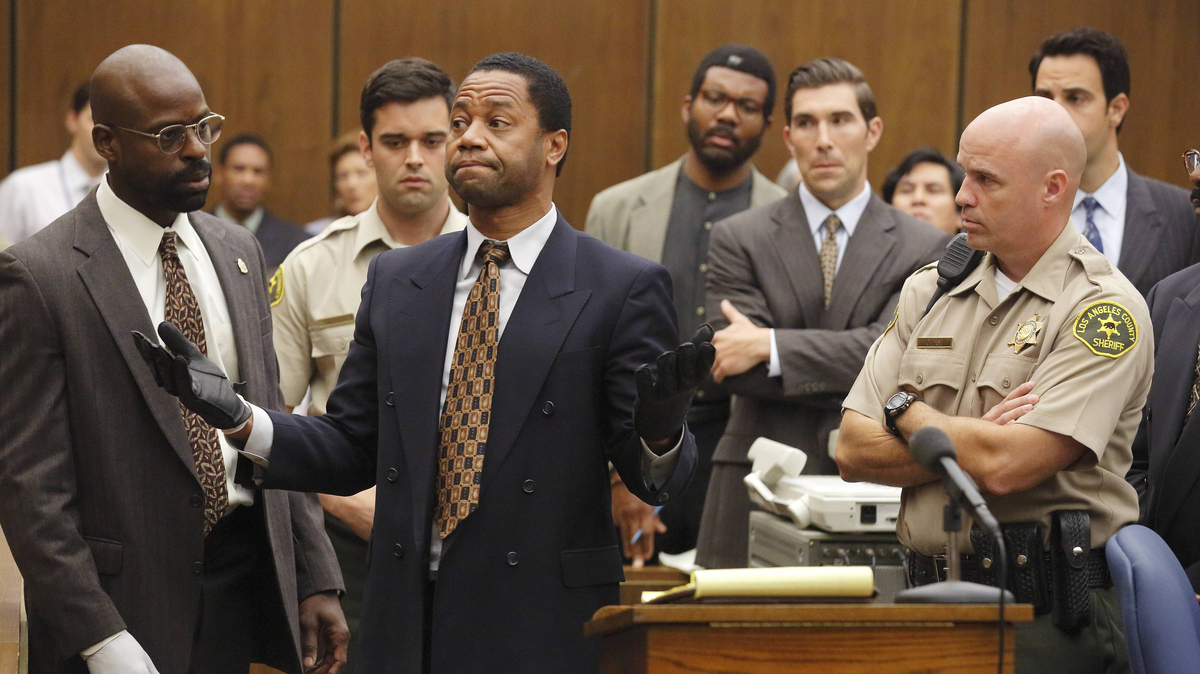 Commentators both amateur and professional have turned over the events of the 1994-95 O.J. Simpson trial in their hands for a couple of decades now, trying to figure out how it got so distressingly ugly as a display, let alone as a legal proceeding. The FX series The People vs. O.J. Simpson: American Crime Story, based on Jeffrey Toobin's book The Run Of His Life, has come to the surprisingly compassionate conclusion, over and over, that a significant part of the problem was not malice but excess made worse by public attention. It was righteous zeal without restraint; good intentions with limited steering and no brakes.

Tuesday night's episode focused on one of the trial's indelible visuals: the prosecution's decision — specifically Christopher Darden's decision — to have Simpson try on the leather gloves that had been entered into evidence, which Simpson then insisted via a demonstration he basically controlled were too small to fit him. I remember hearing this incredulously chronicled at the time as an obvious act of senseless incompetence and arrogance: Why do that? Why risk it? It's so easy to act like things don't fit! Particularly when you're wearing latex gloves and trying to slide leather gloves over them.

The series, which has relied on a collection of stellar performances as it's evolved into less a story about Simpson and more a story about the rest of the participants in the spectacle, asks these questions without the disbelief and the incredulity and substituted curiosity. No italics, just: Why do that? Why risk it? After all, the risks indeed have to have been obvious, or at least discoverable, by smart attorneys, so it's not so much a question of why Darden did it as why he did it anyway.

The People vs. O.J. Simpson finds the answer to this question where it finds a lot of other answers: in intemperate commitment to what one believes to be a laudable goal. As played by Sterling K. Brown, Darden is driven by his absolute belief in Simpson's guilt, which he is convinced can be made clear to the jury through relentless attention to detail. Brown's Darden isn't unaware of the ways in which the LAPD has built a case against itself, but he's firm in his conviction that in this trial, that dynamic is overrun by the physical evidence. He's certain Simpson is guilty, so he's certain the gloves (which are of a type they've learned Nicole Brown Simpson purchased) will fit the man, so he can't bring himself to reckon with what will happen if they don't, or if it appears they don't. He knows they need a moment with impact; he believes it will be this, because he believes he's right.

As this version of the story has it, Darden is driven by perhaps the best possible prosecutorial intentions: the twinned notions that he is right and he has the legally obtained evidence to demonstrate that he's right beyond any reasonable doubt. (In a bitter irony, the accumulating physical evidence isn't doing much for the jury, but it's weighing heavily on Simpson's longtime friend Robert Kardashian — played by David Schwimmer — who grows gradually more skeptical of the defense's explanations for the sheer quantity of physical evidence. Kardashian is another victim, in this version, of laudable loyalty taken to extremes.)

The other factor that the show posits is playing a role in what Darden decides is his relationship with Marcia Clark (played masterfully by Sarah Paulson). The two are close, and though the show doesn't go so far as to present them as romantically involved, it presents them as having considerable chemistry of which they're both aware, to the point where it's transparently a loaded question when he asks her if she wants to head out of town with him for an overnight trip for a friend's birthday. (The real Clark recently declined again to talk about their relationship and whether it was ever romantic.)

It's shortly after they get back from not quite doing anything on this trip about all this chemistry that they clash about the gloves. They disagree and she pulls rank, telling him in no uncertain terms that the demonstration he has in mind is too risky. "This is my case," she says, moments before it happens. "You work for me here." As Brown plays him in this version of the story, Darden is stung by the way their partnership breaks down and she positions herself as the decision-maker (which the real Clark, by the way, says she didn't do and couldn't do, as Darden had control of the witness). Shaken by F. Lee Bailey's taunt that if the prosecution doesn't have Simpson put on the gloves, the defense will (the defense has already concluded they'll never fit Simpson), Darden pushes ahead. He sees it go wrong and he tries to save it, but it's too late.

Part of what has made this series so affecting is that other than in Shapiro's case, there's little venality in its main characters. Johnnie Cochran (Courtney B. Vance) begins as an attorney full of ego but also deeply concerned about police mistreatment of black citizens, Kardashian as a man loyal to a friend, Clark as a prosecutor determined to get justice for a victim of domestic violence who's subjected to relentlessly sexist treatment.

But Darden is the one in this episode who's brought low not by malice but by excess — his desire to prove his value in the partnership with Clark, his belief that physical evidence, too, can create powerful moments in court, and most of all his unwavering certainty that Simpson is guilty and that any demonstration turning on guilt will turn in his favor. He can see it in his mind, and he almost has to put the gloves on Simpson to prove his faith in his evidence. All the reasons the gloves might not seem to fit even if Simpson was guilty that you can think of yourself or that Clark talks about in interviews — that they'd sat in evidence and been saturated and then frozen and unfrozen, that he was trying to put them on over latex gloves, that he might just be a guy who wears gloves that are a little too small for him, or that he could easily manipulate the whole situation to make them appear not to fit — couldn't overcome his conviction that these were O.J. Simpson's gloves, and O.J. Simpson's gloves would fit him if he tried them on.

Does it have a weird tinge of Cinderella? It does.

This is what makes Darden's denial after the fact so devastating, when he tries to tell Clark it's not as bad as it looks while she processes both the fact that he ignored what she told him to do and the fact that the whole thing went quite so badly. He can't really believe it happened, and part of him still wants to explain that the jury will get it, the jury will see that Simpson was acting and pretending and that it was the latex gloves underneath. He still believes that he's right and that being right will bail him out.

It was so hard to believe there was anything left to say about this case than what had already been said as it aged from daytime-TV obsession to Tina Fey joke, and it's equally surprising to find that what the show has to say is largely a central argument that most of these people on both sides — the people on whom the show is concentrating, at least — meant well and were pretty good at their jobs. It's always more complicated and daunting to attribute horrors of any kind to systemic problems and widely shared human frailties rather than the malice or incompetence of aberrant individuals, and it's particularly hard on television, which so favors stories about people over stories about institutions. (This is also what made The Wire so unusual.) It's easier to believe that the trial turned into a circus because it fell into the hands of the wrong people, but more interesting to consider whether it turned into a circus in spite of the best intentions of the right ones.