Accessibility links
Book Review: 'The Swimmer' By John Koethe John Koethe explores the minutia of daily life and the disillusionment that comes with age in his tenth volume of poetry, The Swimmer.

Sink Or Swim: Poems On The Existential Terror Of Everyday Life

Sink Or Swim: Poems On The Existential Terror Of Everyday Life 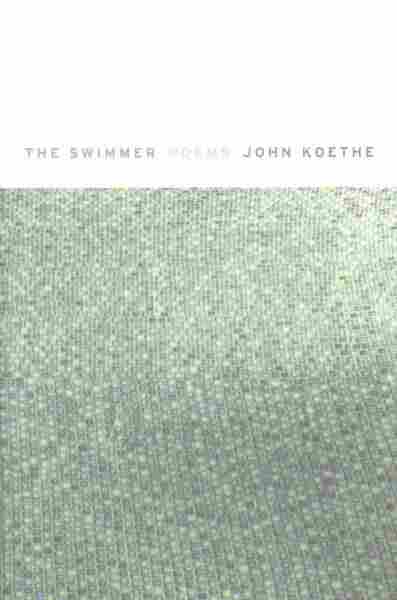 John Koethe is not a hip new poet writing about hip new things, but, at 70, he's deeply worth reading. His tenth collection takes its title—and the title of one of its best poems—from the seminal John Cheever story about a suburban man who decides to get home one day by swimming through his neighborhood pools, which he imagines as a river. Koethe reads the story as "A reimagining/Of a life from the perspective of disillusionment and age," and that is essentially what Koethe's book is, too.

Koethe has taught and written philosophy in addition to his poetry, and a supposition of difficulty has always hung vaguely around his poems. Though they often deal with metaphysical subjects, they're not difficult at all. If philosophy leaves any mark on them, it's in the logical way Koethe thinks through his feelings in his lines (though that's hardly unique to him) and in their skepticism: this is a secular poetry, and often veers away at the last second from transcendence in favor of something more reasonable, like disappointment.

Koethe recalls his younger self "Writing the poems I was sure would make my name," but immortality, the grail of every poet since time immemorial, is shrugged off over and over:

Yet why would anyone want to be immortal?
Immortality isn't what it used to be: the literary version
Comes too late to do you any good, and as for the immortal
Soul, what would it be like to lie awake for all eternity,
Without anything ever changing?

Sobered by advancing age, Koethe finds himself, instead, tempted by the graspable quotidian, the "minutia...little highs defining days/ In need of definition: the package on the porch,/ The email, the unexpected phone call." Koethe's real struggle—a very common one, and not just to poets—is between the abstract and limitless horizons of the mind, and the banal, yet finally vitalizing facts of everyday life.

In this way, he is like the mid-century poets who were his mentors and examples, the writers of the first-generation New York School, John Ashbery and James Schulyer (both of whom Koethe name checks and imitates in this book) especially, who tried to reconcile romantic spirits with the rhythms of contemporary speech and pop culture. Death is the humdrum reality that most preoccupies Koethe in these poems; it feels palpably closer to him: "I realize almost everybody in this poem is dead now," he writes in a long account of times past.

He longs for "home: a place you've/ Been and think you'll always be, a place/ You know you can return to" and finally feels bereft and afraid when, looking for it, he realizes "there was nothing, nothing I could see." What could be more straightforward and universal? The past disappears, we're going to die, and it's terrifying.

The thing is, I find myself deeply seduced by Koethe's bald existential terror; I feel companioned. And I'm interested in a mind that can formulate such fathomless thoughts so plainly. These poems won't shatter the universe, but that's precisely their point, the tragedy they lament: that as individuals we are small and the universe pays our seemingly vast inner lives no mind. Koethe seeks to ease his mounting fear by talking—by writing—himself through it, and listening in is a perverse pleasure, and a palpable comfort.

Craig Morgan Teicher is a writer and editor, most recently of the collection, Once and for All: The Best of Delmore Schwartz, releasing April 2016.