Accessibility links
Starting A Small Business: Keep Your Day Job Or Go All In? To start a small business, you'll need lots of time and a passion for what you do. From turning a hobby into cash to running a franchise, we share tips from people who've found success. 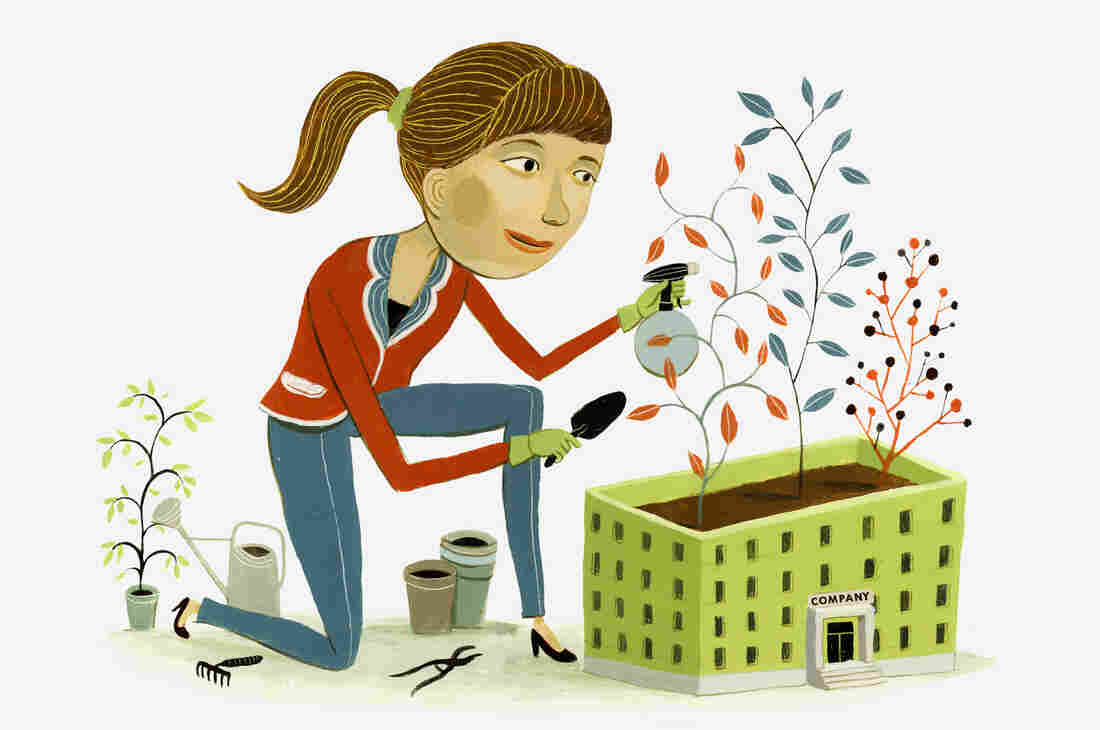 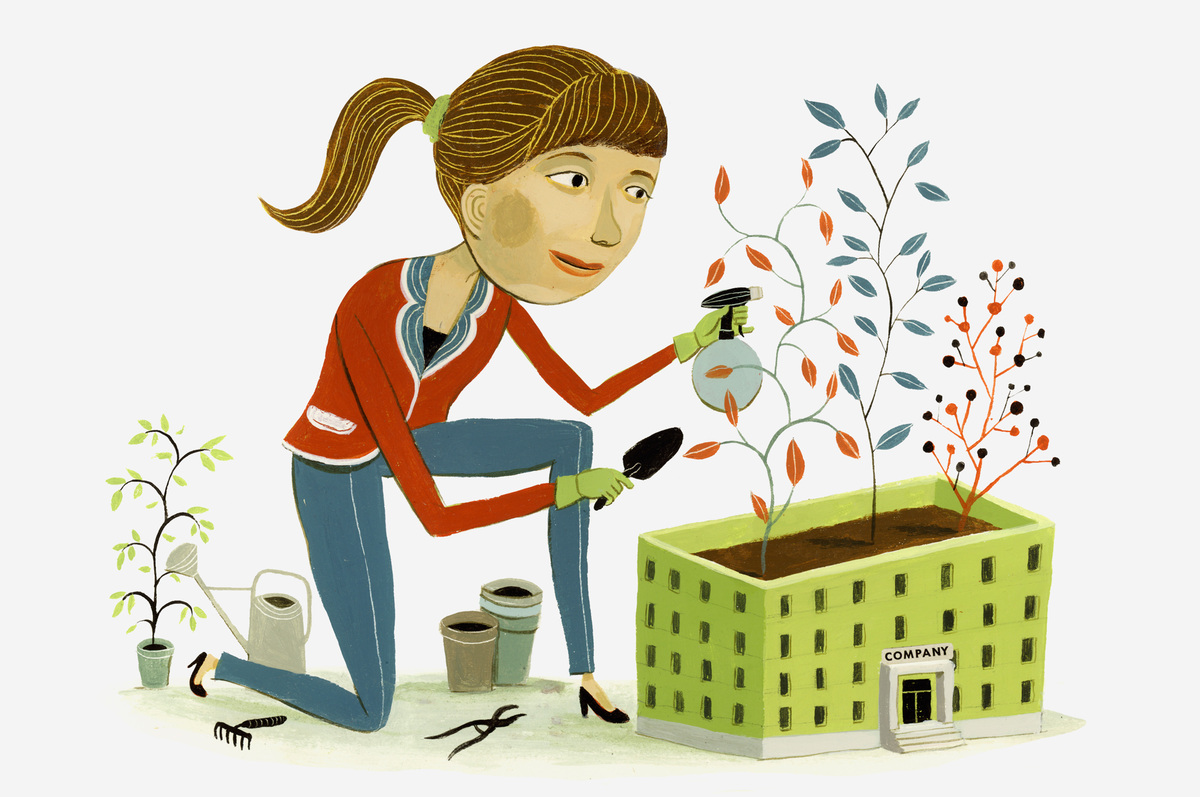 Many people who work a regular job dream of walking out of their cubicle and starting their own business. And every year, about 800,000 Americans do just that.

Dave Selden is one of them. His business grew out of his passion for beer — glass after glass of it. That's immediately clear when you take a look at a video on his website.

He describes how he was trying to drink "a different beer every single day for 999 days." He says he succeeded for about 660 consecutive days, which he admits sounds crazy to say out loud.

That was back in 2009, when Selden, who lives in Portland, Ore., had a job in public relations but was writing a beer blog on the side. He started getting invited to lots of beer festivals and wanted to keep track of all the beers he was tasting.

But "alcohol being what it is," Selden says, "sometimes my memory the next day wasn't great."

So Selden developed a pocket-sized paper notebook, with a flavor wheel and other graphic aids to help him take good notes. He wanted it to look good, so he called a professional printer who told him he couldn't just print a few copies. Selden decided to print a thousand and see if he could sell some.

They sold out in two weeks — but Selden wasn't ready to give up his day job. 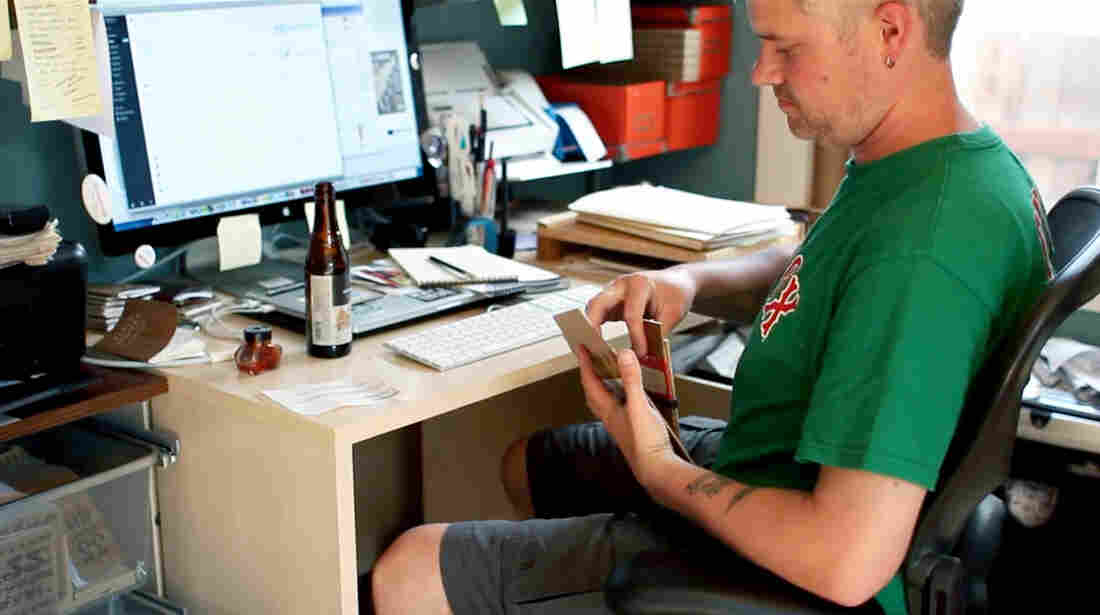 Dave Selden built his company, 33 Books, out of his love of beer. SuperGreat Video/Courtesy of Dave Selden hide caption

At the time, the idea of his beer-tasting notebook becoming a business was "preposterous," Selden says. He's 37, married and has two young children.

But he got a lot of encouragement. "Why don't you make a tasting notebook for wine or coffee?" his friends said.

So he did, and now he's making about a dozen versions — including for cheese, hot sauce and cigars. Last year, the sales for Selden's company, 33 Books, totaled about $300,000. Not bad for a one-man operation — that has gone global. His notebooks are sold in stores around the world.

"Yesterday I sent a bunch of books over to Germany and Switzerland," he says. "And I have some stuff going out to Taiwan today."

Selden has been growing the business for about seven years but only quit his public relations job three years ago, and he advises aspiring entrepreneurs to take it slowly.

Most small businesses start at home because people have limited resources, says Patricia Greene, a professor at Babson College, which focuses on training entrepreneurs. And she says it's a good idea to keep your "day job" until your business is on its feet.

But that's not necessarily the best advice for everyone.

Franchisees Advise Going All In

Maggie and Brian Harlow, both 47, jumped in with both feet when they started a Signarama franchise in Louisville, Ky., 13 years ago. They provide businesses with everything from refrigerator magnets to storefront signs, crafted in their workshop.

There are three things that many would-be business owners often get wrong, says Patricia Greene, a professor of entrepreneurship at Babson College in Massachusetts.

Time. It will always take more time than you think. Think hard and realistically about the time commitment.

Money. There's real misunderstanding about who is actually going to give you money for your startup. Why should a bank lend a startup money? People will expect to see you investing your own money in it. Because if you don't believe in it enough to put your own money in, why should they?

Secrecy. A unique idea? It almost never, ever happens. Lots of people have the same ideas. For most businesses, success isn't about the idea, it's about the execution. And the more you learn from talking to other people, the better the execution. So share your ideas, reach out for help, and learn as much as you can about your industry.

In order to be successful, Maggie says, they decided they needed to give it everything they had; in other words, "commit fully to it."

"If we kept depending on secondary income from somewhere else," he says, "we would never push hard enough on this."

"We had to sort of live on beans and rice for a while and work really long hours," she says. And with two sons — now 15 and 17 — Maggie says it was hard juggling her CEO role and her role as a mother.

But despite the tough times, it was the right recipe for the Harlows: Last year, their firm of 19 employees generated revenues close to $2 million.

Both Maggie and Brian caught the entrepreneurial bug from their parents; Maggie's dad started the auto dealership where she worked. She decided she wanted her own business, and Brian shut down his own small construction company to help her out.

They are partners in the Signarama franchise, and Greene says evidence suggests that having a partner increases the odds of success. 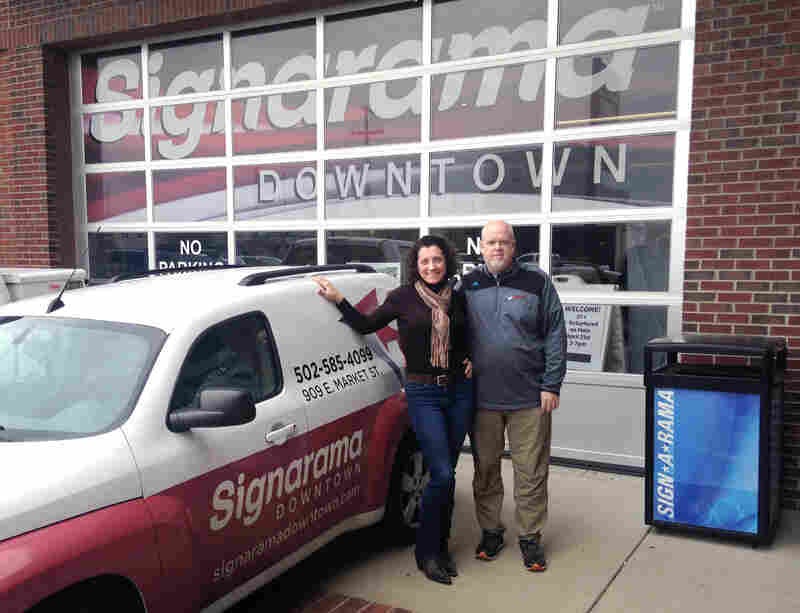 Maggie Harlow and her husband, Brian, are partners in their Signarama franchise in Louisville, Ky. Kenny Schindler/Courtesy of Maggie Harlow hide caption

But if your partner is your spouse, Maggie says, it raises the stakes.

"Whatever interpersonal issues you have at home, they will be magnified at work," she says.

The Harlows' relationship was tested just a couple of years after they opened their shop in downtown Louisville. Their sales were spiking higher, and they were moving to a new location and taking on more expense.

It required a flood of quick decisions; Brian and Maggie were overwhelmed.

"We couldn't agree on the strategy," says Maggie. "Do you hire this kind of person? Do we need to buy more equipment? There were so many decisions to be made."

Getting Advice Is Crucial

So they found a business coach and met with her for several months to craft a plan. But Brian, who characterizes himself as a "doer," got tired of the meetings.

Maggie remembers Brian telling her, "You know, I really am not enjoying this. I don't enjoy sitting and talking about this stuff." He told Maggie that she should go to the meetings with the coach and come up with a plan, and he would support it and make it happen.

So You Want To Be Your Own Boss?

There are a lot of free resources available for anyone who's thinking about starting their own business. Here are a few recommendations:

Maggie's response? "That's awesome." Maggie loved the meetings and strategizing, so she dived into that. Brian took charge of implementing.

Maggie and Brian discovered another thing Greene says is crucial: getting advice from someone like a business coach or an advisory board. There are organizations like SCORE, a nonprofit association for small businesses, that can connect you with a free mentor, Greene says.

And, Greene says, don't be shy about asking successful entrepreneurs for advice. They love to talk about what they do, she says.

The fundamental ingredient for a successful small business, Greene says, is a passion for what you do, because starting and growing a business is hard work.

It takes a lot of time and a lot of effort, she says, so "you better care about what you're doing."