Accessibility links
Can Donald Trump Rewrite The Electoral Map For The GOP? Trump says the new voters he's turning out can put Midwestern swing states in play. But it's a gamble whether he could win over enough white voters for every minority voter he drives the other way.

Can Donald Trump Rewrite The Electoral Map For The GOP?

Can Donald Trump Rewrite The Electoral Map For The GOP? 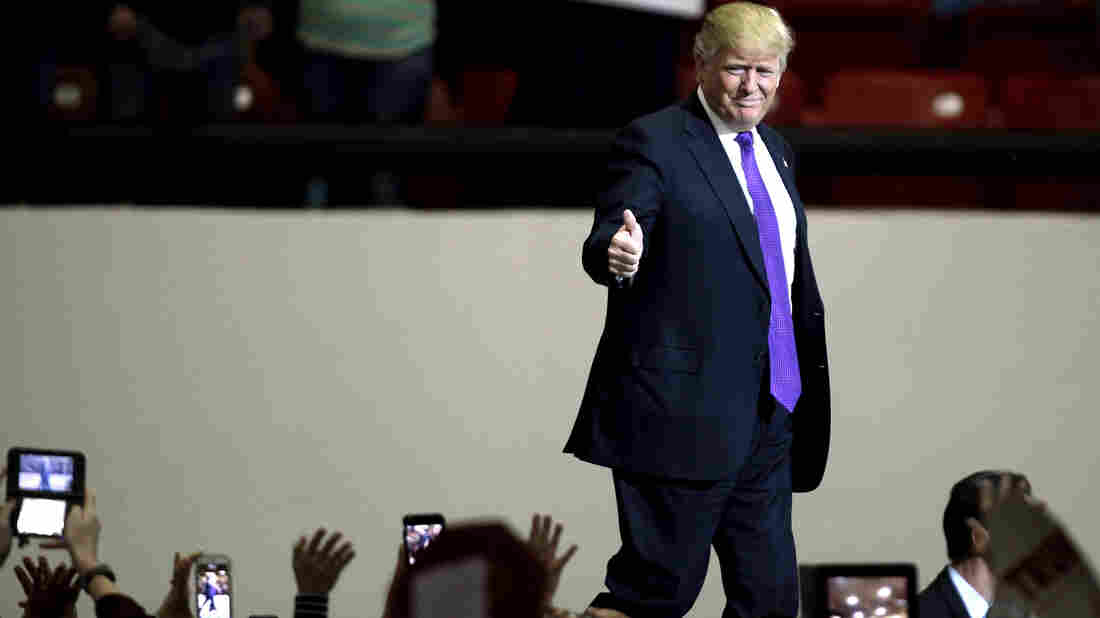 Donald Trump is hoping he can rewrite the GOP's electoral math if he becomes the party's presidential nominee. John Gurzinski/AFP/Getty Images hide caption 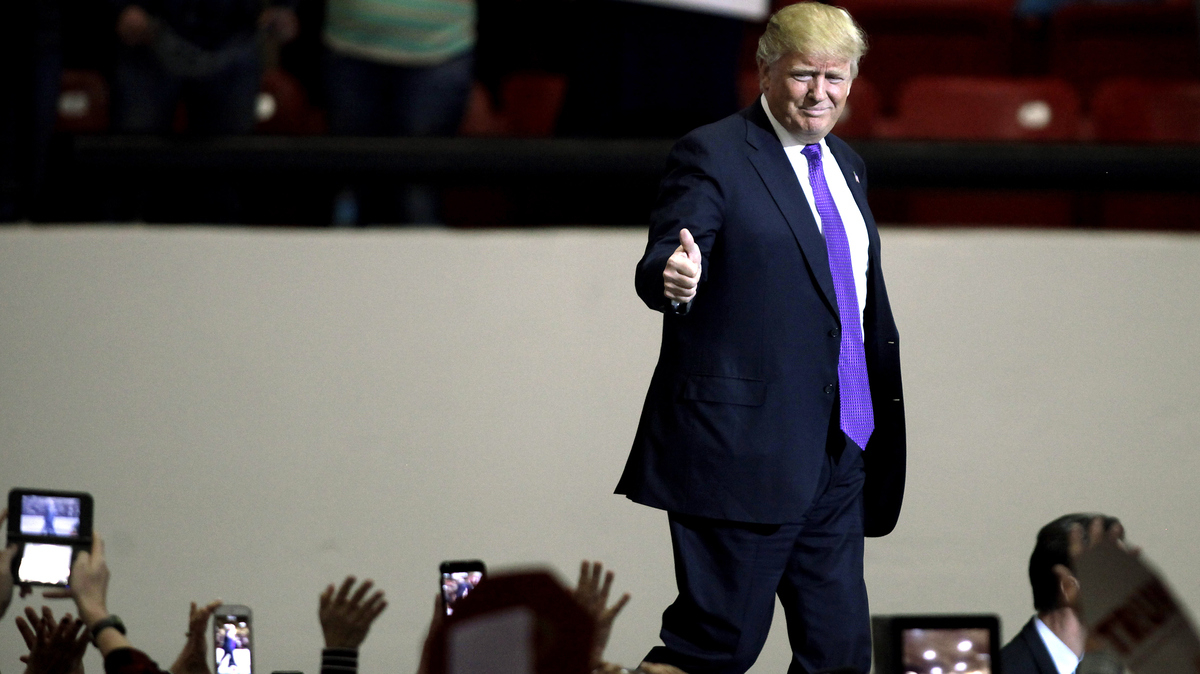 Donald Trump is hoping he can rewrite the GOP's electoral math if he becomes the party's presidential nominee.

Donald Trump is the GOP delegate leader and has the clearest path to the presidential nomination of any remaining candidate. But does he have an electoral path to 270 in November?

There's a basic math problem for any Republican nominee.

In every one of the past six presidential elections, Democrats have won states that add up to about 240 electoral votes — pretty close to the majority needed to win.

Republicans have won about 103 electoral votes in each of the past six elections, so there's a big hill to climb. Any GOP nominee has little room for error and would have to win all the big battleground states — Ohio, Florida, Virginia — or else find some blue states they can flip to red.

That alternative route is what the controversial real estate magnate says he can bring to the table this fall. Trump claims he is bringing in so many new voters to the Republican fold that he can win traditionally blue states, like New Jersey, Michigan or even New York.

White voters are still key for Republicans, and that's who Trump appeals to most.

After the 2012 election, the Republican National Committee commissioned a so-called political "autopsy" report. It said in order to win the White House again, the GOP had to become more competitive with minority voters, particularly Hispanics.

But there were contrarian voices. Even before Trump began his march, some GOP strategists were saying minority outreach is crucial in the long run but not necessarily right away.

"If we are not going to do that, there is a way to win the presidential election by goosing the white vote. The sky is not yet falling. We are on the brink, but we are not there yet," said GOP strategist Ford O'Connell.

Trump, with his hard-line stands on trade and immigration, might be just the candidate to eke out one more electoral college win thanks to a largely white vote.

"Trump could make the map larger. Because of where he's standing with white voters right now, he would have the Democrats on their heels particularly in the industrial Midwest," predicted O'Connell.

Even Republicans who are no fans of Trump admit it may be possible.

"l see Donald Trump as a wrecking ball," said Ari Fleischer, a former White House press secretary for George W. Bush and one of the co-authors of the RNC's 2012 autopsy. "He's currently swinging through the Republican Party, and destroying our positions on entitlement reform and on free trade."

"But like all wrecking balls, he's going to swing in another direction too, and that will be going through the Democratic Party, wrecking their support among traditional blue-collar, working-class voters," Fleischer continued. "That's the Donald Trump that we've seen so far. He changes everything."

For Democrats, demographics cut both ways.

Democratic pollster Stan Greenberg has studied blue-collar white voters since the 1980s. Back then, he wanted to find out why these voters switched from his party to the GOP.

Now, more than three decades later, Greenberg wonders if the story of Trump could be called "The Revenge of the Reagan Democrats."

"The Reagan Democrats are alive with the angry white male who've made themselves felt in the Trump primaries," the Democratic pollster acknowledged.

But, Greenberg said, there's a big unknown variable still: "The question is: Are there enough of them, and what's the price of trying to reach them?"

There's no question the white working-class vote is shrinking. Non-college-educated voters were about half of the electorate in 1992. Now they make up a third. But in Rust Belt states like Wisconsin, Ohio and Pennsylvania, they still make up half of eligible voters.

Ultimately, Trump would need an unprecedented turnout among these voters. Some analysts calculate that Trump would need at least 65 percent of the white vote to win; 2012 GOP nominee Mitt Romney got 59 percent.

"He would have to pull a rabbit out of the hat to do this," Brookings Institution demographer William Frey said of Trump. "The demography is against him in a lot of the country, even though we see these huge crowds coming out at his rallies."

Trump himself is a big motivator, but he cuts both ways. Yes, he has been able to attract thousands (he says millions) of new voters to the GOP primaries, but in a general election he'd also motivate his opponents.

For every white working-class male Trump turns out in the Rust Belt, he could also bring out a college-educated suburban woman and a newly registered Latino to vote against him in another part of the country.

"The problem with the theory and the strategy is that, I think almost immediately, you'll see other states like Florida, Virginia, Colorado, Nevada — states that have had a growth of both ethnic diversity, immigrant diversity but also a rise of cosmopolitan, well-educated populations," Greenberg said, "and those voters don't like Donald Trump."

Ultimately, Democrats aren't sure what to think.

For every bit of Democratic schadenfreude at the GOP's current disarray, there's an equal amount of anxiety about Trump's potential in the fall.

"You just don't know," Plouffe said in Politico's "Off Message" podcast. "In Virginia, I think Trump would, in a general election, do very, very poorly in Northern Virginia. But does he over-perform Romney and [2008 nominee John] McCain, for instance, and even Bush in the southwestern part of the state? He could. We just don't know."

So far, Democrats and Republicans are left asking the same question: If Donald Trump has broken all the rules of politics so far, why couldn't he break some more?