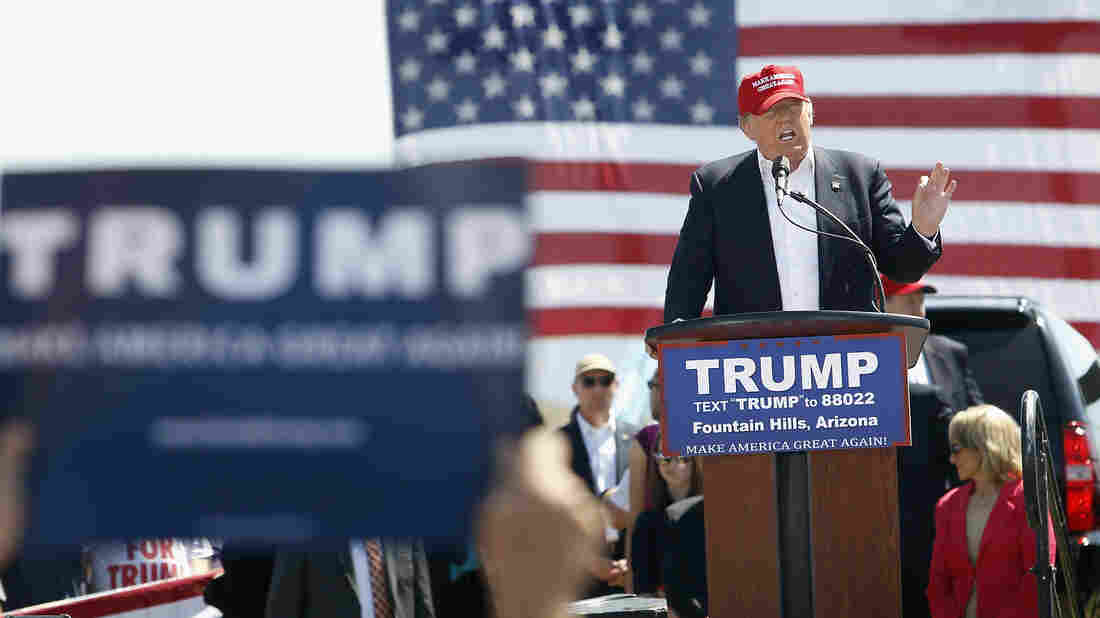 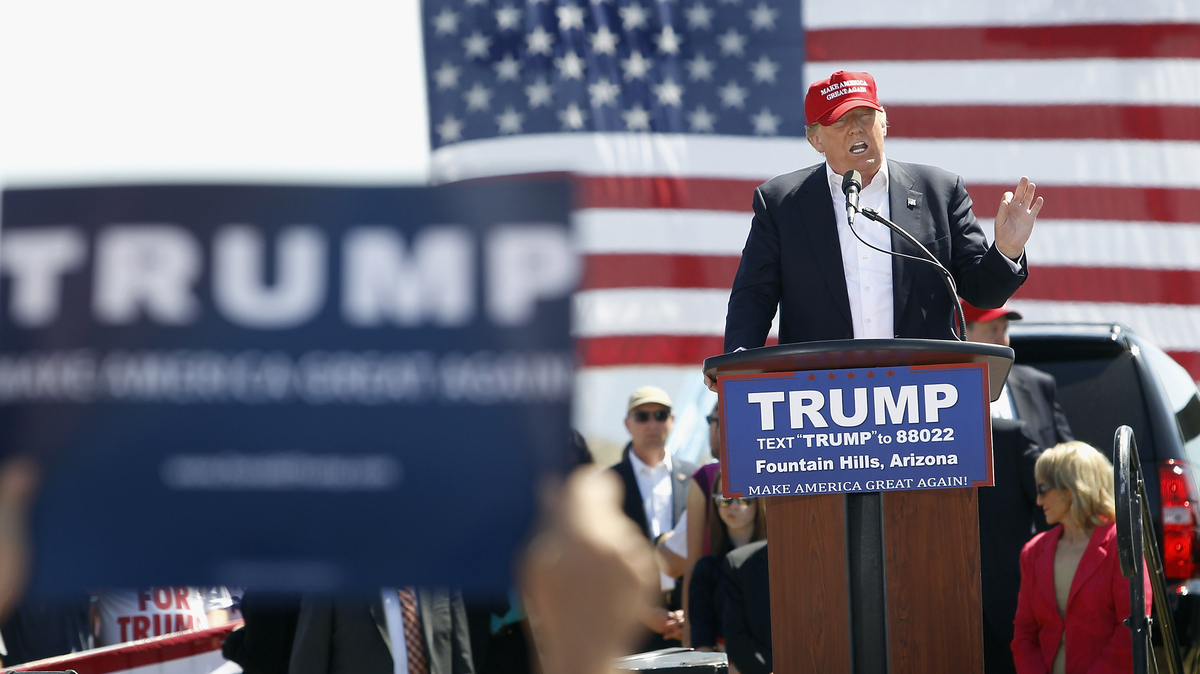 Donald Trump speaks at Fountain Park during a campaign rally on March 19, 2016 in Fountain Hills, Ariz.

The magic number of Republican delegates Donald Trump needs to clinch the party's nomination is 1,237. After the March 15 primaries, Trump leads the delegate count with 678, to Ted Cruz's 423 and John Kasich's 143. On Tuesday, Republicans in Arizona, Utah and American Samoa will take to the polls to award the next round of 107 delegates. And the battle could go all the way to the Republican convention in Cleveland.

The GOP race has changed since NPR last spoke to a group of young Republicans for their take on their party's future. Several candidates have dropped out and Donald Trump has gone from leading the polls to actually winning votes. What would a Donald Trump nomination do to the GOP?

So we gathered these young Republicans again to get a read on how they feel the campaign is evolving.

Attorney Chelsi Henry is 27. She was the youngest woman elected to office in the history of Jacksonville, Fla. Will Estrada, 32, works as a home-schooling advocate in Northern Virginia. Political strategist Margaret Hoover is 38 and from New York City. And joining the group is another New Yorker: Eugene Spektor, a 27-year-old software engineer.

Rachel Martin: Chelsea, when we all spoke weeks ago, you were supporting your candidate of choice, Jeb Bush. He's not in the race anymore. How are you feeling? 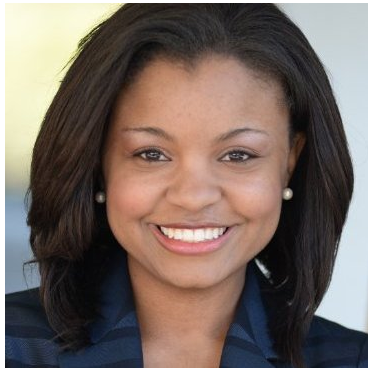 Chelsi Henry: I respect the decision that he made and so now my vote is up for grabs.

RM: Will Estrada, when we last spoke you said you were pretty keen on both of the Cubans at the time, that was Marco Rubio and Ted Cruz. Ted Cruz is the last man standing. How are you feeling?

Will Estrada: I was surprised, I thought Marco Rubio would still be in the race, but as a Ted Cruz supporter I am very happy and I actually still think that Cruz is going to be our GOP nominee.

RM: Margaret, what I remember from our conversation was that you were squarely in the stop Trump camp. 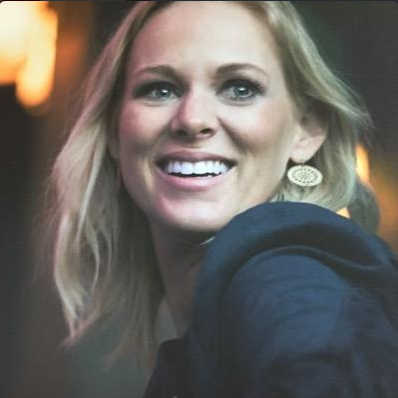 Margaret Hoover: I was certainly in the stop Trump camp, but not for anyone. I'm not a fan of Ted Cruz at all. So when it comes time for New York to primary on April 19, I'll primary for John Kasich. Because I think frankly that in terms of the Venn diagram of where there are many overlaps, I think there's an extraordinary overlap between — sort of philosophically, and even in terms of their supporters — between Ted Cruz and Donald Trump. And that is not a part of the Venn diagram that I relate to or identify with when it comes to being a Republican.

RM: Eugene, Donald Trump has not been able to move the needle so much when it comes to attracting minority voters, is that something of a concern to you in terms of his ability to win in a general election?

Eugene Spektor: I don't know if those numbers are accurate. Because, like Nevada he had a high minority, or Latino, vote turnout. You have a lot of prominent black supporters coming out to say that they believe Trump is going to be a positive for the black community — especially with the way he wants to crack down on illegal immigration and create jobs for the inner cities. But my vote is about who can actually beat Hillary Clinton. And I believe that he has the best chance because he has cross-party positions that appeal to Republicans, Democrats and independents. And someone like Ted Cruz, I just don't think that he has any legitimate shot at actually winning.

Hoover: Can I just push back on one element though of what Eugene just said? For the sake of accuracy ... Donald Trump has said he has experience doing very well with minorities and he cites that Nevada example. But the truth is that in Nevada while he did win Hispanics, Hispanics were only eight percent of the vote in Nevada in the GOP primary. So no more than 2,500 voters.

Estrada: And an example would be Ben Carson.

Spektor: I think that's a representation of why he has crossover appeal. Because if Republicans are telling him he's not conservative enough for them, then that opens the door to all these independents and Democrats who feel isolated by the over-conservativism coming from the right always. And I think that has a lot to do with him being a New Yorker and religion not playing as big of a role as some of the other Republican candidates. And I think people who agree with him on his economic positions are no longer isolated by policies that don't reflect their social beliefs. 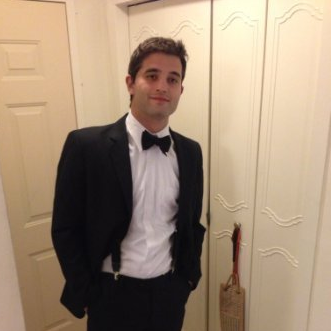 Spektor: From the social issues perspective, he's the only Republican that says he supports funding Planned Parenthood and sees the benefit that it has for women's issues. That doesn't necessarily mean that he supports abortion, but he doesn't believe that his ideology needs to be the ideology for everyone.

So I see opportunity for him to bring compromise on these issues that most Republicans that are really conservative don't want to budge on.

Spektor: I think that to get to a middle ground that's workable in a partisan and divided Congress you need to have bold proposals. So if you propose something like, 'Let's deport all illegal immigrants,' it leaves room for people to be OK with, 'OK, let's build a wall. Let's allow people to register and if they're not criminals they can stay and never become citizens' — a workable middle ground.

RM: So you think this is just a negotiating tactic?

Spektor: Absolutely, and he talks about this in The Art of the Deal, that it's a negotiating tactic for two reasons. One, it allows him to get to a workable middle. But two, it gets media attention and it uses the media for his benefit. And I think the numbers came out where he's gotten $2 billion worth of free coverage from the media, and it's been a hugely successful method. 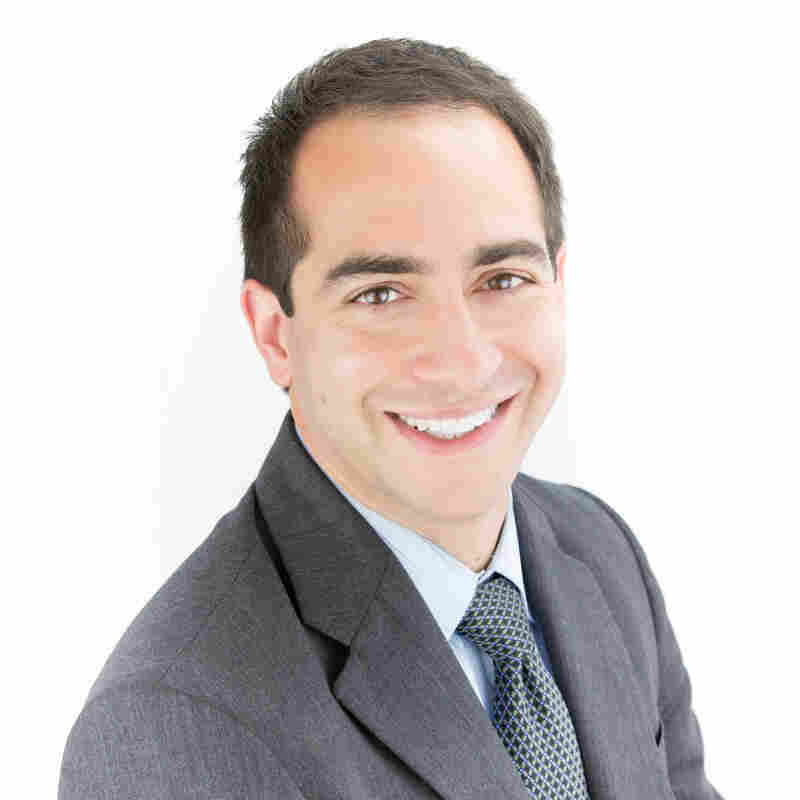 Estrada: Our last two Republican candidates, McCain and Romney, were middle-ground candidates and they both lost. It's time to go with a true conservative.

Hoover: Eugene, I feel your pain. I run a gay-rights organization from the Republican side of the aisle. I hear you loud and clear on the social issues. What Trump has done — and I agree with you, this is sort of the silver lining of Trump — is that he's blown the door off of this notion that you have to have this socially conservative litmus, pass this socially conservative litmus test. This straitjacket of conservative issues in order to win the Republican nomination.

But you know what guys, this is larger than ideology — this is about demographics. And the problem with Mitt Romney, and the problem with John McCain and the problem that Donald Trump will have is that none of them can get enough white male voters to the polls to make up for the fact that we are not getting enough Hispanic voters and enough women voters and enough African-American voters. And we need to be thinking as young Republicans about the future of the Republican party and how we are going to broaden and sustain it so that there is a coalition that can win. Not this year, not next year, but into the 21st century. And I know that was the tagline for Marco Rubio's campaign and he wasn't able to actuate it. But we do really need to think about that and think about how to do it.

RM: There's all this talk about a possibly contested convention and Mitt Romney has just come out and said that he's going to caucus for Ted Cruz. But it wasn't really an endorsement, it was — 'I'm going to do this just to deny Donald Trump the delegates that he needs to win outright.'

Spektor: If people needed any more reason [to be upset] about the corrupt system that currently plagues Washington — you have it. 'Forget [how] you people voted and all these primaries, forget about it. We're going to decide who's going to be the nominee.' Really? I thought this was a democracy. I mean, people go for Donald Trump because they know that he's not part of this system that's bought and paid for that isn't representing the people.

And if you go and you tell all these people — "You know what, your vote didn't matter. Our choice is what really matters, we know best." I agree with Donald Trump. I'm not saying there's going to be riots, but there will be a march on Cleveland with a bunch of people who no longer believe that this country is a democratic republic.

RM: If Donald Trump is the nominee, would you vote for him?

Henry: I haven't got to the answer of that question yet.

Hoover: You're exactly right, Will, because at least if I were to support Ted Cruz, we would lose I think miserably in a general election. Let's be very clear, Ted Cruz does not have the formula that's going to broaden the base.

Estrada: But you think Donald Trump will lose too.

Hoover: Yeah, exactly, well so we're screwed either way guys. Let's be very clear about what the reality is. We are not going to win this election either way. And this is the calculation that Sen. Lindsey Graham from South Carolina made yesterday. He hates, despises, abhors, disrespects, cannot really buy Ted Cruz at all — the guy who shut down the government. ... But he believes that at the end of the day, we lose 40 states [but] we still have a Republican party that we can rebuild. And if you go with Donald Trump, it's destroyed.