Accessibility links
In San Francisco, An Affordable Housing Solution That Helps Millennials Eighteen- to 24-year-olds are one of the fastest-growing homeless populations in the U.S. For many, public housing is out of reach. Enter a nonprofit that offers subsidized apartments to young adults. 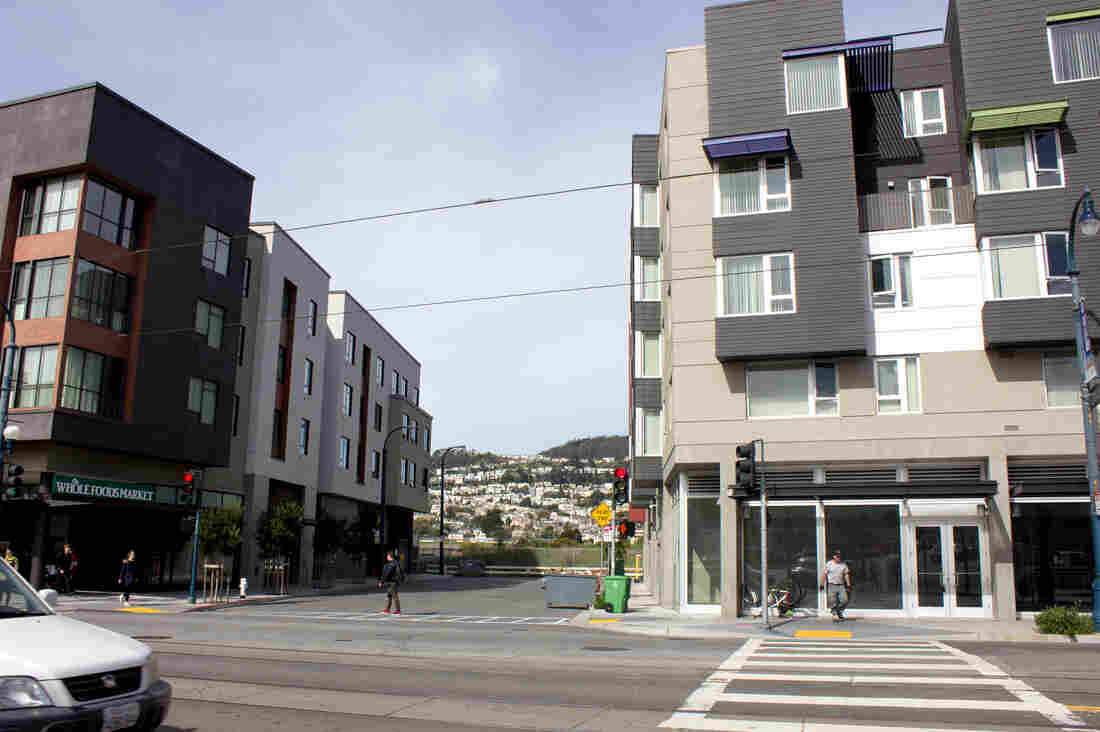 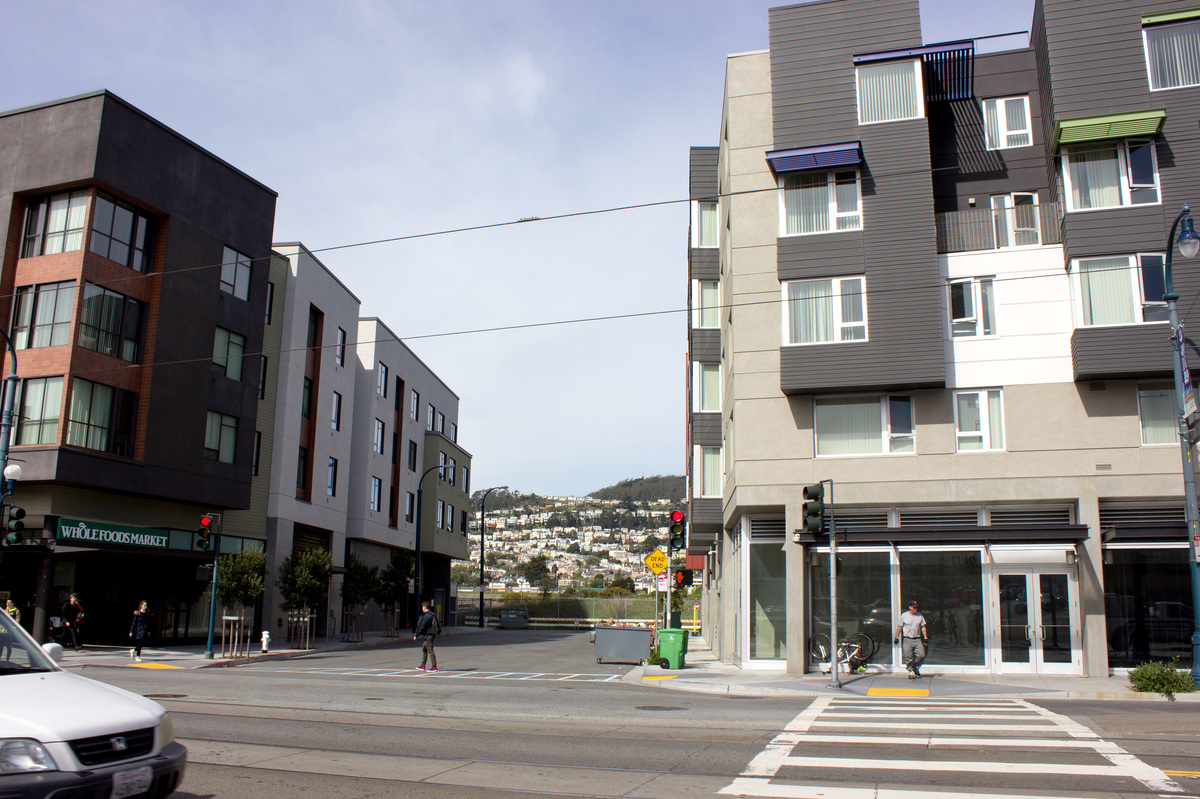 It's normal for millennials to still live at home these days. But what if you're a millennial who doesn't have a home to go back to?

Growing up, Alkeisha Porter says, she didn't like her mom's husband, and her dad had a drug problem. So at 16, she moved out and became homeless.

"I was basically just house-hopping from friends to some family members. Hey, it was comfortable to me. It wasn't cold. I wasn't sleeping outside," says Porter, now 23.

Young people — 18- to 24-year-olds — make up one of the fastest-growing homeless populations in the country. In many big cities, like New York, Los Angeles and San Francisco, where housing is at a premium, finding affordable housing is especially hard.

In San Francisco, one-bedroom apartment rents average $3,490 a month. There are about 1,600 homeless young adults in the city on any given night, and public housing is out of reach for many of them.

Porter found an apartment for herself and her baby on San Francisco's Ocean Avenue, in a building run by a nonprofit called Mercy. It provides subsidized affordable housing for low-income residents, including 25 apartments reserved for 18- to 24-year-olds.

Cinthia Mendoza is one of Porter's neighbors.

"This is my first dream, to be on my own, in my own apartment, paying rent, paying bills like a normal adult does," said the 21-year-old Mendoza.

Domestic violence forced her out of her home and into foster care when she was 17.

"Behind the door there's a refrigerator, a huge one, which I've never had in my life. And then a microwave, and then I have a big stove, and it's brand new. Everything was brand new when I got here," she said.

Mendoza is one of the lucky ones. There are way more low-income youth who need housing than there are subsidized apartments available. Technically, Mendoza and Porter could qualify for federal public housing instead of living at Mercy. 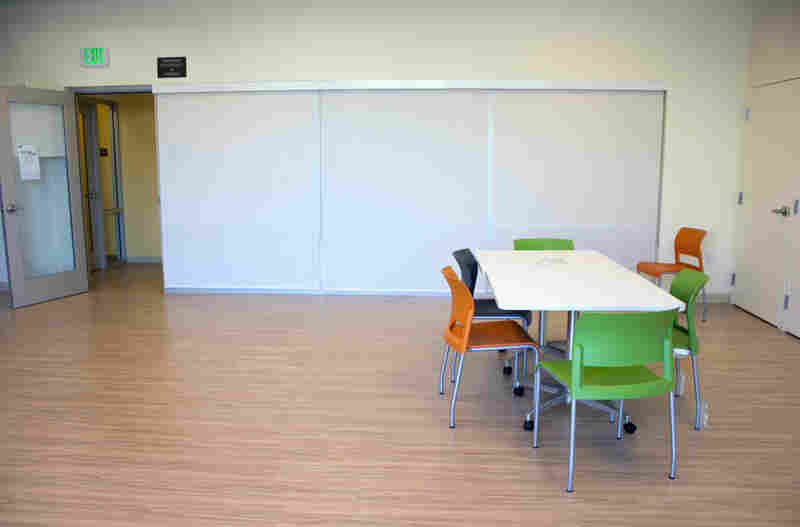 Mercy provides meals, computer spaces and recreational spaces for its residents, including TaySpace, a communal space for it's 18- to 24­-year-olds. Shawn Wen/Youth Radio hide caption

But for young adults, the problem isn't applying. It's getting in. Their demographic is considered a lower priority.

"Remember that you are competing against families who do not have a home and who are looking for public housing," Ashord says. "When I was in the New York City Housing Authority some 20 years ago, the waiting list was more than 10 years."

In San Francisco, the waiting list for public housing is so long that it's closed for the time being. There's another obstacle specific to young adults: Being enrolled in college classes presents extra rules that limit access to Section 8 federal housing.

"We need to be rethinking some of these rules around housing for students," says Eric Rice, a professor of social work at the University of Southern California.

Rice's work includes a focus on homeless youth. He says he's frustrated that taking a few courses can jeopardize a young person's ability to get housing.

"Because if we have students who are homeless, who are low-income, they need higher education as a long-term solution for alleviating their situation with respect to poverty," Rice says. "And we want to make that easier, not harder."

Before 2005, students didn't have to meet such strict rules when it came to public housing. But then a scandal broke, in which well-off college athletes in schools across the country were caught living in Section 8 public housing. This controversy prompted the rules to change, affecting most full- and part-time students.

This is just one reason local solutions like Mercy Housing have popped up, to provide alternatives for 18- to 24-year-olds. The nonprofit welcomes students but has to limit student residents to part-timers to qualify for federal tax credits. These tax credits make it possible to build this sort of public housing alternative in the first place.

The Mercy apartments on Ocean Avenue are situated right across the street from San Francisco City College. This was an intentional decision on the part of Mercy, to make it easier for the young residents to enroll if they choose to.

These student-residents don't have to worry about being kicked out of their homes just for taking a few classes.