Accessibility links
Cruz: 'Empower Law Enforcement To Patrol And Secure Muslim Neighborhoods' GOP presidential candidates were among the first politicians to respond to the Tuesday morning attacks in Belgium. 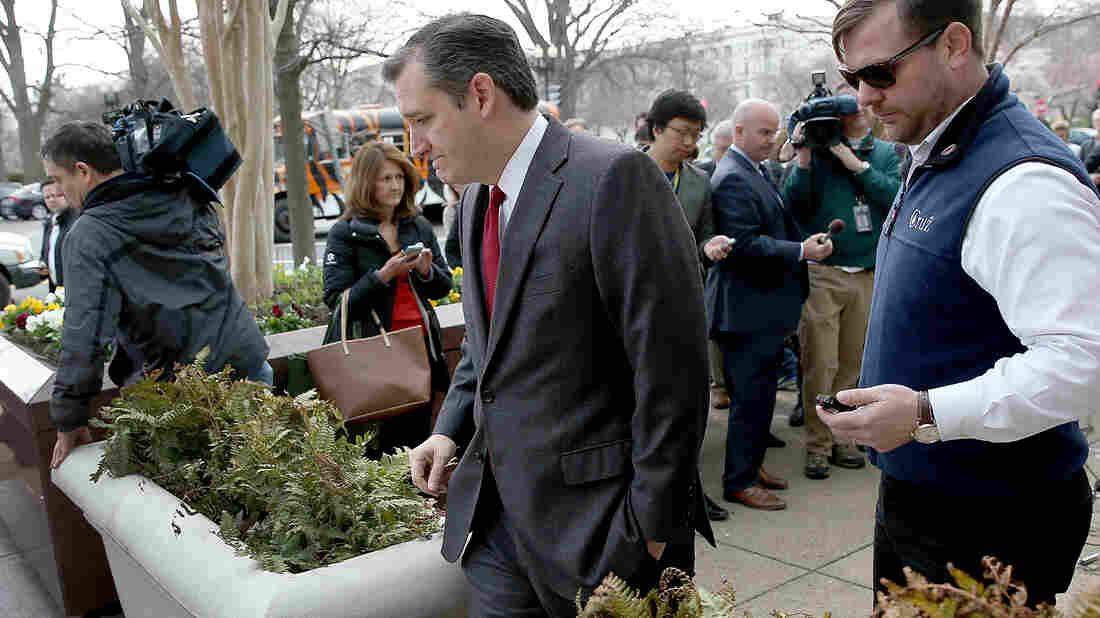 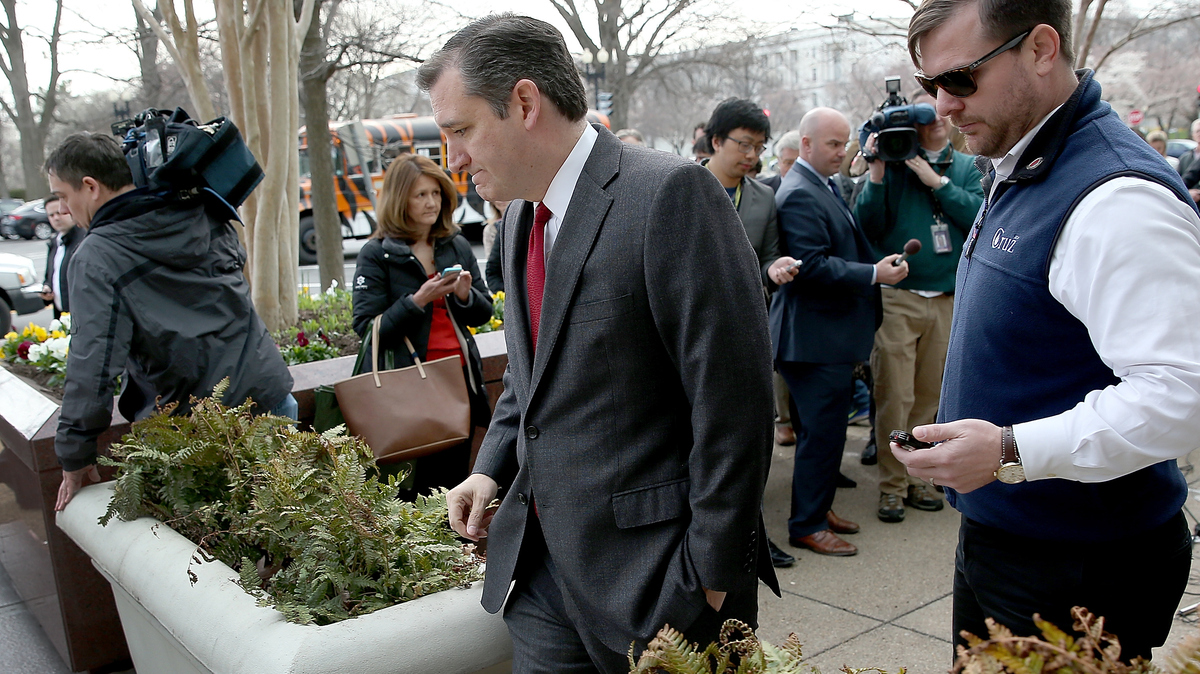 After terrorist attacks in Brussels on Tuesday morning that killed more than 30 people and wounded more than 200, American politicians took to social media and TV news programs to respond to the violence.

Several pointed to the attacks as a reason to focus America's fight against Islamic extremism.

"Our hearts break for the men and women of Brussels this morning. Make no mistake — these terror attacks are no isolated incidents. They are just the latest in a string of coordinated attacks by radical Islamic terrorists perpetrated by those who are waging war against all who do not accept their extreme strain of Islam.

Radical Islam is at war with us. For over seven years we have had a president who refuses to acknowledge this reality. And the truth is, we can never hope to defeat this evil so long as we refuse to even name it. That ends on January 20, 2017, when I am sworn in as president. We will name our enemy — radical Islamic terrorism. And we will defeat it."

We will name our enemy -- radical Islamic terrorism. And we will defeat it. https://t.co/Z7YTgUg3AA

Cruz also made a televised statement aired on Fox News, where he said, "ISIS has declared jihad on Europe and on the Unites States of America. They have declared their intention to murder as many innocents as possible."

Soon after news of the attacks broke, presidential candidate Donald Trump tweeted, "Do you all remember how beautiful and safe a place Brussels was. Not anymore, it is from a different world! U.S. must be vigilant and smart!"

Trump made the rounds on multiple morning news shows. On Fox & Friends, Trump seemed to say I told you so, telling Fox News, "I've been talking about this for a long time, and look at Brussels."

Do you all remember how beautiful and safe a place Brussels was. Not anymore, it is from a different world! U.S. must be vigilant and smart!

President Obama looks and sounds so ridiculous making his speech in Cuba, especially in the shadows of Brussels. He is being treated badly!

Trump also spoke with CBS News on Tuesday morning via phone and was asked about the attacks. "You look at what just took place in Brussels, and that's peanuts compared to what's going to happen," he told CBS. "Because we're not tough enough, and frankly, our leaders aren't smart enough. We have to have very strong borders."

He continued, "And people by the way from certain parts of the world, like Syria, without documentation, should not be allowed in our country... We have no idea who they are, where they come from. They could be ISIS-related. We can't allow that to happen."

Trump pointed to recent terrorist attacks in San Bernardino, Calif., and Paris as reasons to step up security and screening at U.S. borders. CBS anchors pointed out that many terrorists who have committed recent attacks were citizens of the countries the attacks took place in.

He continued, "We have people living in our country that want to do great harm to our country." When asked if Americans should profile their neighbors, he replied, "Everybody should watch out."

I want to express my solidarity with the people of Belgium in the aftermath of the attacks that took place in Brussels. Along with every American, I am sickened by the pictures of the carnage, by the injuries and by the loss of life.

The wave of terror that has been unleashed in Europe and elsewhere around the world are attacks against our very way of life and against the democratic values upon which our political systems have been built.

We and our allies must rededicate ourselves to these values of freedom and human rights. We must utterly reject the use of deadly acts of terror.

We must also redouble our efforts with our allies to identify, root out and destroy the perpetrators of such acts of evil. We must strengthen our alliances as our way of life and the international system that has been built on our common values since the end of the Second World War comes under challenge from these and other actors of evil.

My thoughts and prayers are with the victims of the attacks and with the people of Belgium.

Later in the morning, Kasich said President Obama "must return home immediately [from Cuba] and get to work with our allies to respond with strength against the enemies of the West."

The president must return home immediately and get to work with our allies to respond with strength against the enemies of the west.

"Terrorists have once again struck at the heart of Europe, but their campaign of hate and fear will not succeed. The people of Brussels, of Europe, and of the world will not be intimidated by these vicious killers. Today Americans stand in solidarity with our European allies. Our thoughts and prayers are with the families of those killed and wounded, and all the people of Belgium. These terrorists seek to undermine the democratic values that are the foundation of our alliance and our way of life, but they will never succeed. Today's attacks will only strengthen our resolve to stand together as allies and defeat terrorism and radical jihadism around the world."

Clinton also spoke by phone to NBC. "We've got to tighten our security. I've talked about our visa system," she said. "When I was secretary of State we often had some difficulty with our European friends because they were reluctant to impose the kinds of strict standards we were looking for. That, after Paris, has changed."

These terrorists seek to undermine the democratic values that are the foundation of our way of life. They will never succeed. -H

Seeming to respond to Trump's comments, Clinton added, "It's unrealistic to say we're going to completely shut down our borders to everyone. That would stop commerce, for example, and that's not in anybody's interests."

In a statement, the Democratic presidential candidate said, "We offer our deepest condolences to the families who lost loved ones in this barbaric attack and to the people of Brussels who were the target of another cowardly attempt to terrorize innocent civilians. We stand with our European allies to offer any necessary assistance in these difficult times."

The statement continued, "Today's attack is a brutal reminder that the international community must come together to destroy ISIS. This type of barbarism cannot be allowed to continue."

We offer our deepest condolences to the families who lost loved ones in this barbaric attack and to the people of Brussels.

The president addressed the attacks during a planned address to the Cuban people in Havana on Tuesday morning. "We will do whatever is necessary to support our friend and ally Belgium in bringing to justice those who are responsible. And this is yet another reminder that the world must unite ... in fighting against the scourge of terrorism." (More here from Obama on NPR's two-way blog)

The White House says that he has been briefed on the attacks and spoke by phone with Belgian Prime Minister Charles Michel offering condolences and assistance in investigating the attacks.

The State Department is monitoring the safety of U.S. citizens in Brussels. The Department of Justice and FBI say they are monitoring events closely and coordinating with Belgian authorities.

Speaker of the House Paul Ryan

We must confront this threat together. We must defend democracy, and defeat terror. #BrusselsAttack https://t.co/HS545JZVzt

"I want to express the condolences of the U.S. House of Representatives to the Belgian people. I know we're all watching this right now, and this scene is just so horrific.

"As our countries have always done, we must confront this threat together. We must defend democracy, and defeat terror.

"Our prayers are with Brussels, as is our solidarity."

Schiff is the ranking member of the House Intelligence Committee, and tweeted Tuesday morning that the attacks in Belgium "bear all hallmarks of ISIS-inspired or coordinated attack."

He noted that the attacks occurred despite tight security in the country since the November 2015 attacks in Paris were linked to suspects in Belgium. The prime suspect for those attacks was arrested near Brussels just a few days ago.

In a statement, Schiff said Europe is "facing a real threat from the thousands who have traveled abroad to Syria and Iraq to train with ISIS, and have returned home."

His statement continued, "In the wake of these attacks, we here in the U.S. and our allies across Europe must be on alert for possible copy-cat attackers who activate in the wake of these bombings. We do not know yet what role, if any, encrypted communications played in these attacks — but we can be sure that terrorists will continue to use what they perceive to be the most secure means to plot their attacks. That the attackers could go forward even when Brussels was under constant vigilance for just this kind of assault, shows how difficult and dangerous the threat from ISIS remains."

Schiff also said America "must go after terrorist safe havens whether in Iraq, Syria, or places like Libya."