Accessibility links
For Freemasons, Is Banning Gays Or Being Gay Un-Masonic? Freemasons are best known for their secrecy, but they are having a very public dispute — about a ban on gay members. Freemasons in Tennessee will decide this week whether to lift the ban. 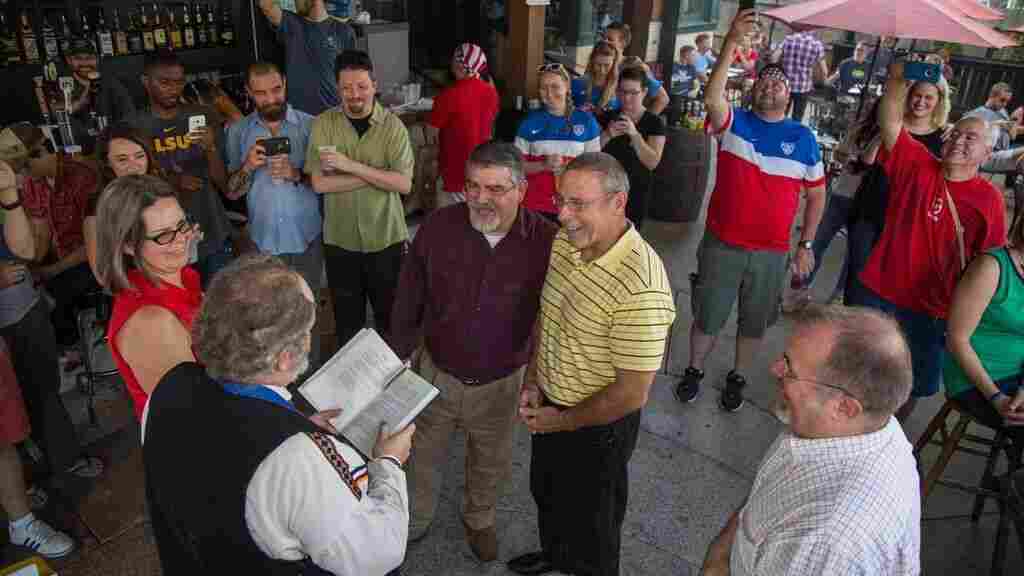 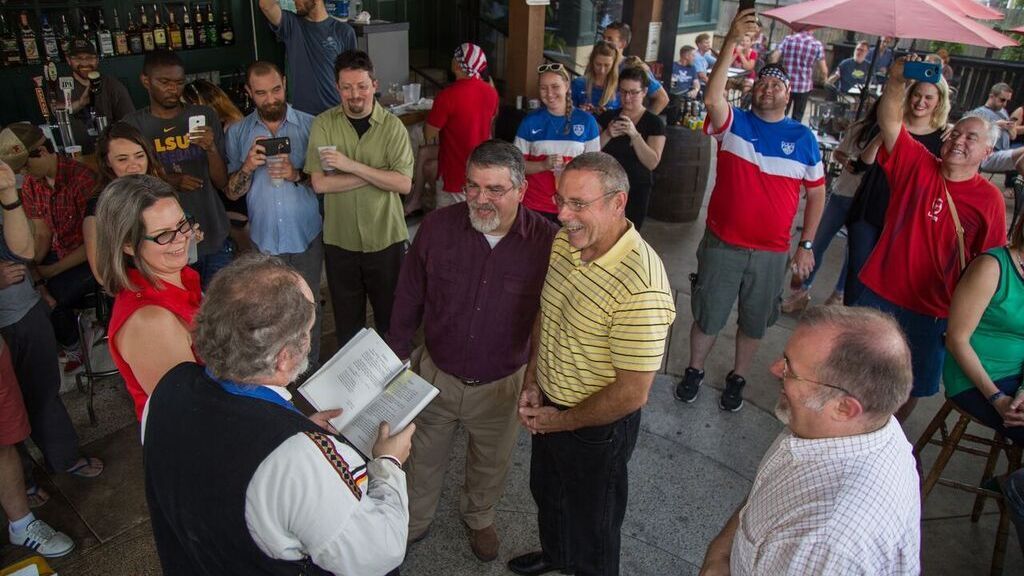 On June 26, 2015, just hours after the U.S. Supreme Court validated same-sex marriages, Dennis Clark (center left) and Mark Henderson exchanged vows in Midtown Memphis. This photo, later posted on Facebook, led to their suspension from Freemasons by the Grand Lodge of Tennessee.

The couple — Mark Henderson and Dennis Clark — say their neighbors responded within hours.

"We came home and there was a bottle of champagne in a potato salad bucket on the front porch," Henderson says.

But the response from another community, one that they've been actively involved in for years, wasn't as welcoming.

"The first letter that we got from the Grand Lodge of Tennessee was that we were being brought up on charges for un-Masonic conduct," Clark says.

Clark and Henderson are Freemasons, members of a worldwide fraternity that shares the same rites, symbols and secrets.

The organization is known for secrecy, but it's having an increasingly public dispute: For the past 30 years, the Tennessee group has banned gays (each state or jurisdiction has its own penal code). On Wednesday or Thursday, members in the state will decide whether to uphold the ban.

The Label Of Bigotry

Lodges from California to Belgium are urging Tennessee to lift the ban. They say it harms the future of the organization, which is looking to stay relevant and attract younger members.

According to the Masonic Service Association of North America, the Masonic Fraternity is the oldest fraternity for men in the world. Members practice rituals with languages and symbols from the Middle Ages — many believe that the fraternity began from that time.

The first Grand Lodge of England was founded in 1717. Freemasonry then continued to spread through Europe and the American colonies. Many prominent figures in the United States were Freemasons, including George Washington, Benjamin Franklin and even Chief Justice John Marshall.

The values the Freemasons emphasize include personal study, self-improvement and social betterment along with the Enlightenment ideals of liberty of the individual and right of all persons to worship as they choose.

Chris Sanders of the Tennessee Equality Project says religious backlash to the marriage equality decision has been prominent in the state Legislature and in private organizations, such as churches and the Freemasons.

"As same-sex marriage continues to be accepted, those who don't accept it will look for new, innovative ways to carve out little realms where they can continue to discriminate," Sanders says.

The suspension of Clark and Henderson in Tennessee inspired the Grand Lodge of Georgia to enact its own ban on gay members last fall. Chris Hodapp, author of Freemasons for Dummies, says this has stirred an international debate. As Freemasonry struggles to attract new members, lodges worry about the label of bigotry.

"When a young man hears that Masons in a state are throwing gays out, they just see that as the whole organization doing that and not being isolated to a particular area," Hodapp says.

There's no Supreme Court of Freemasonry to stop the Grand Lodges of Tennessee and Georgia. Both lodges did not respond to interview requests and restricted their members from speaking to the media.

According to various Freemason websites, the basic requirements are:

You also have to be proactive in seeking out a member or a lodge near you and contacting them. Then you'll be subjected to an investigative process, and you have to wait for the members to approve your request.

Grand Lodges of California, Washington, D.C., and the country of Belgium, among a growing list of others, have suspended relationships with Tennessee and Georgia. Glen Cook, a lawyer and Master Mason, says there is precedence for exclusionary policies.

"Some of those who argue against the actions of Georgia and Tennessee have said that we don't discriminate. Well, we do," Cook says, in terms of being an all-male fraternity that asks members to believe in a higher power.

Cook himself couldn't be a Freemason in his home state of Utah until its Grand Lodge lifted a ban on Mormons in 1984. Cook suspects that the debate in Tennessee will hinge less on sympathetic appeals and more on whether a ban goes against the founding principles of Freemasonry.

"And whether this type of restriction forms any useful purpose, and whether it distracts from our goal of elevating mankind," he says.

Over the next two days in Nashville, the Grand Lodge of Tennessee will decide which conduct is more un-Masonic — being gay or banning gays — a decision that could affect Freemasons around the world.