Accessibility links
Birth Control At The Supreme Court: Does Free Coverage Violate Religious Freedom? Religious schools and other nonprofits like the Littler Sisters of the Poor say the government's workaround for birth control still imposes a burden on their freedom. 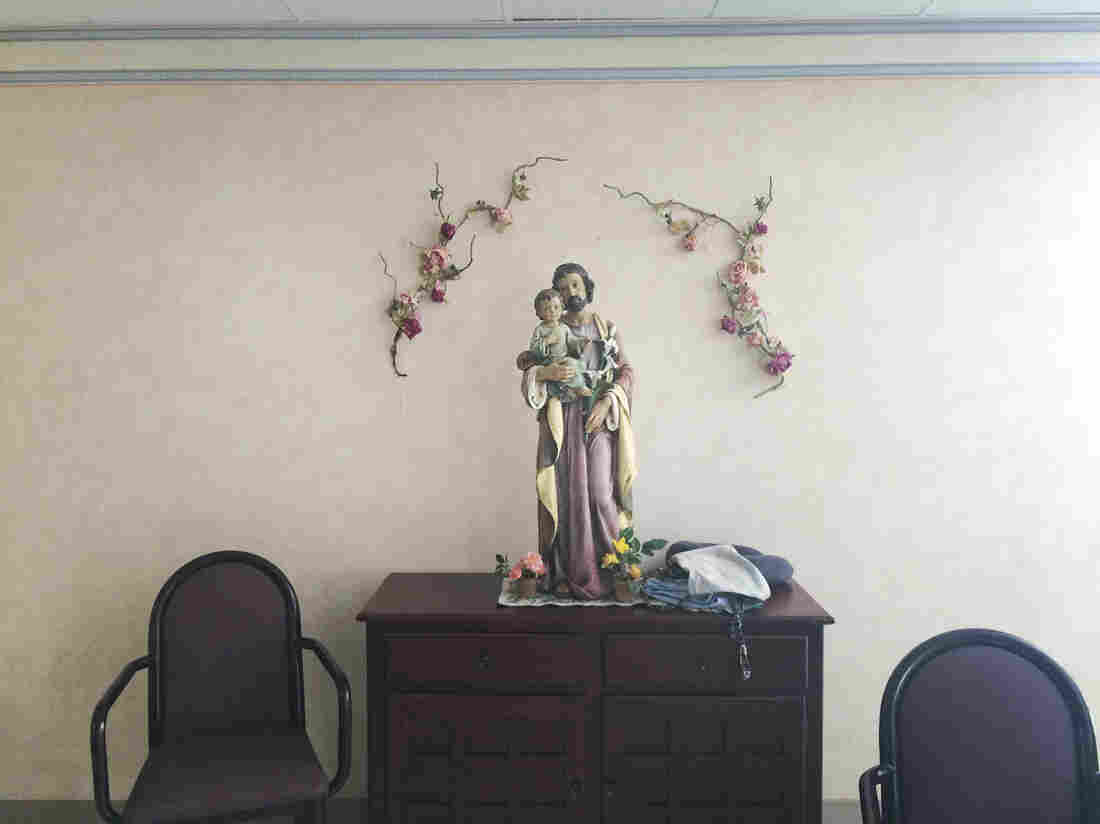 A statue of St. Joseph with baby Jesus Christ at the Little Sisters of the Poor, an order of Catholic nuns that runs homes for the elderly poor. The organization, along with several others, argues that the government's workaround to provide free birth control still burdens its free exercise of religion. Samantha Del Duca/NPR hide caption 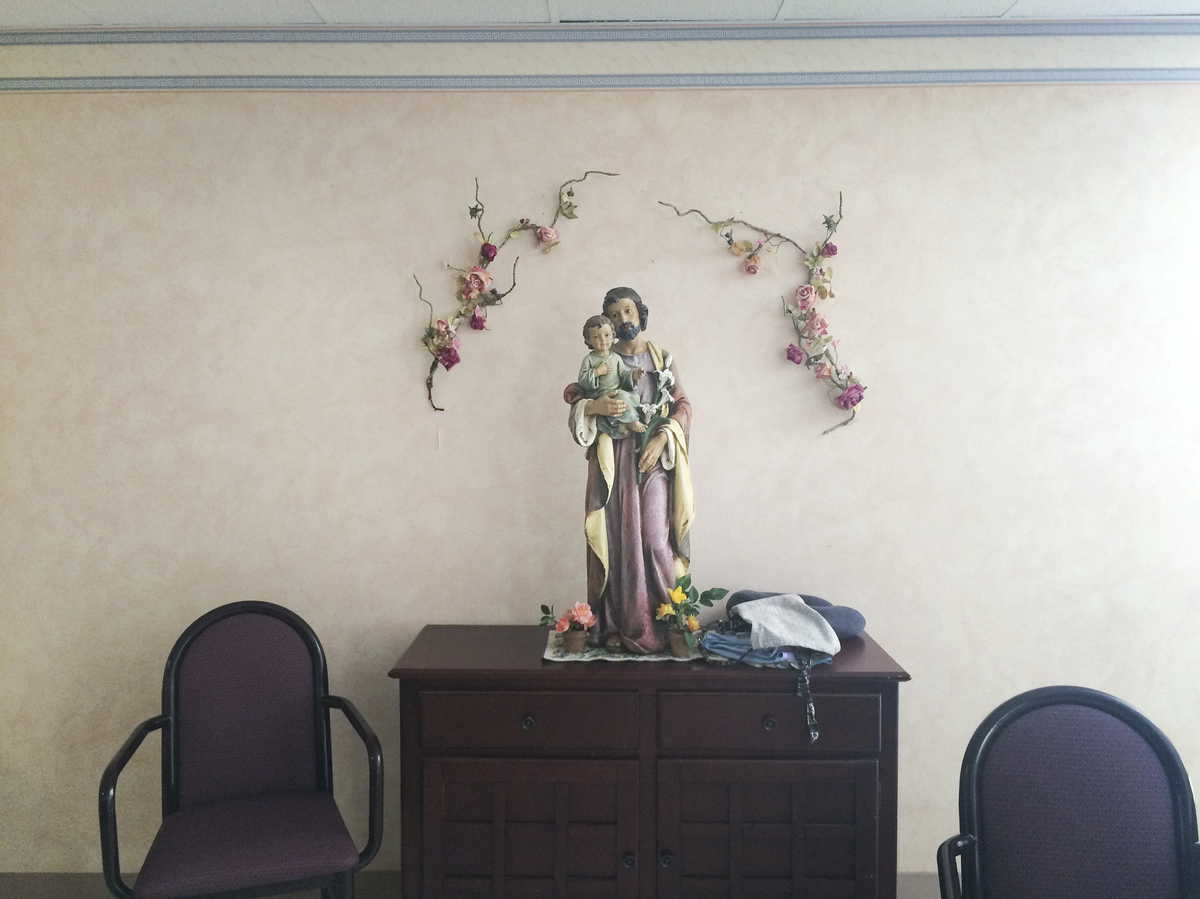 A statue of St. Joseph with baby Jesus Christ at the Little Sisters of the Poor, an order of Catholic nuns that runs homes for the elderly poor. The organization, along with several others, argues that the government's workaround to provide free birth control still burdens its free exercise of religion.

The rights of the religious and the secular clash again Wednesday at the Supreme Court, this time in the controversial context of Obamacare and birth control.

The health care law sought to equalize preventive health insurance benefits between the genders. That meant free coverage of birth control for women, with an automatic exemption for houses of worship, like churches — but not for nonprofits like religious schools and hospitals. Those nonprofits were given a workaround to accommodate their objections, but some say that accommodation still burdens their free exercise of religion.

There are cases before the court from all over the country. The plaintiffs range from large universities to small service organizations, among them the Little Sisters of the Poor, an order of Catholic nuns that runs homes for the elderly poor.

The Washington, D.C., Little Sisters home has space for about 100 residents. A new facility, it is light and airy, and the atmosphere pretty joyous.

At a recent visit, one of the nuns was playing tunes from The Sound of Music while about a dozen residents sang along. As the music changed to "When the Saints Come Marching In," resident Alberta Wright, who is over 100 years old, gave a little shimmy as she danced with one of the sisters to lots of laughter.

Though there are crucifixes everywhere, not all the residents or staff are Catholic. When it comes to providing birth control insurance coverage for the staff, the Little Sisters have a religious objection, and they believe that the workaround meant to accommodate that objection still makes them complicit in providing contraception for their employees.

The government, in contrast, views the law as a reasonable accommodation.

"Anyone who has a religious objection ... doesn't have to pay for, refer, doesn't have to organize, doesn't have to accommodate that contraception coverage for his or her employees," says former Health and Human Services Secretary Kathleen Sebelius. "What they are required to do is provide notification to the government or their insurer that they are opting out. That's it."

The government then steps in to fill the gap, and along with the insurer — for example, Blue Cross Blue Shield or a third-party administrator — makes birth control available, without charge, to employees, dependents or students who want birth control coverage.

Sister Constance Veit says she doesn't object to signing the required form or a letter.

"The religious burden is what that signifies, and the fact that the government would, you know, be inserting services that we object to into our plan, and it would still carry our name," she says.

But just a few miles from the Little Sisters home is Georgetown University, an elite Catholic institution, where many of the students, faculty, staff and their dependents are not Catholic, and they want birth control coverage. Alison Tanner, co-editor-in-chief of the Georgetown Journal of Gender and the Law, helped put together a brief in the case filed on behalf of the estimated thousands of people on her campus who are currently getting birth control under the accommodation, but would not if the Little Sisters prevail in the Supreme Court. 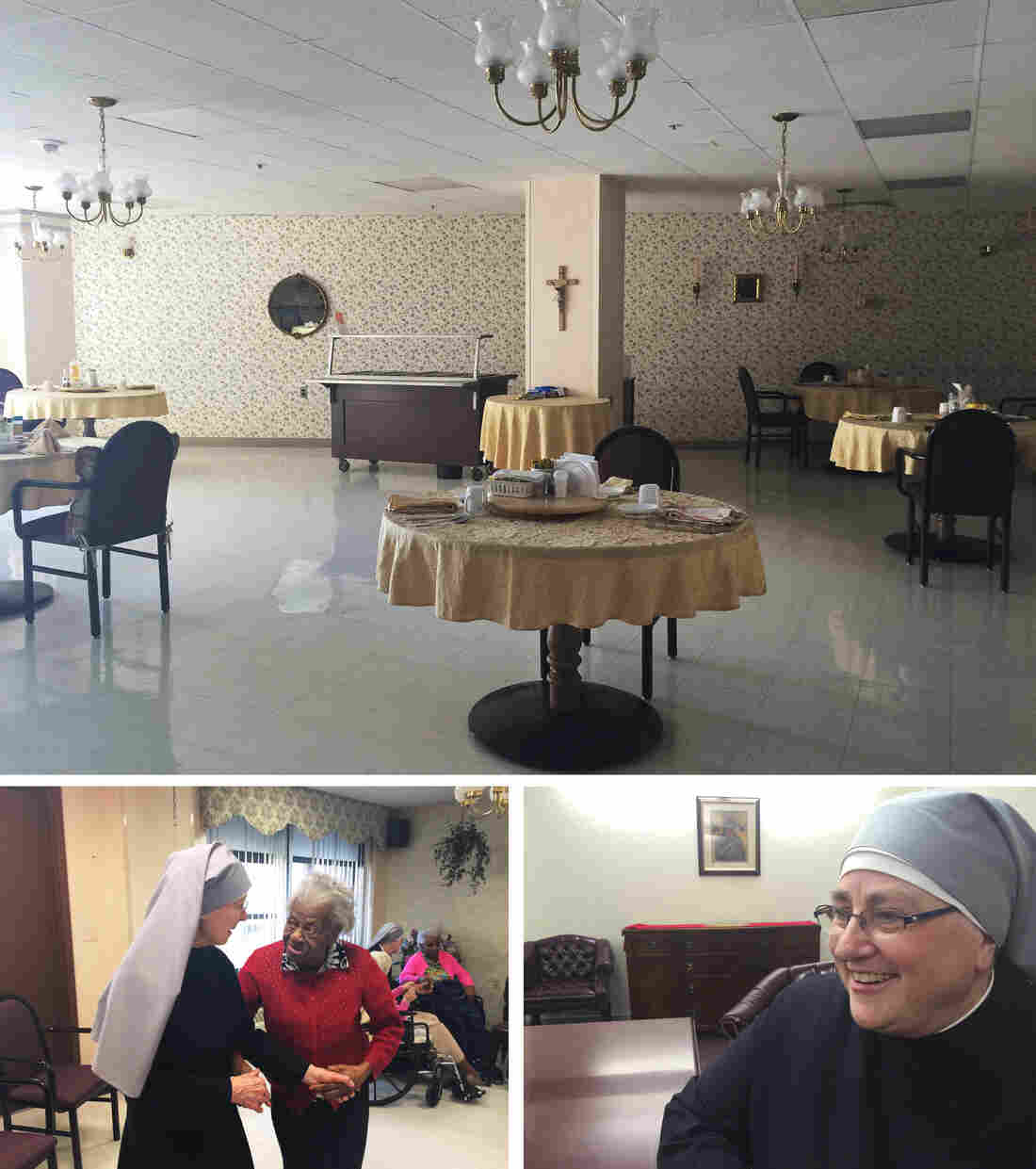 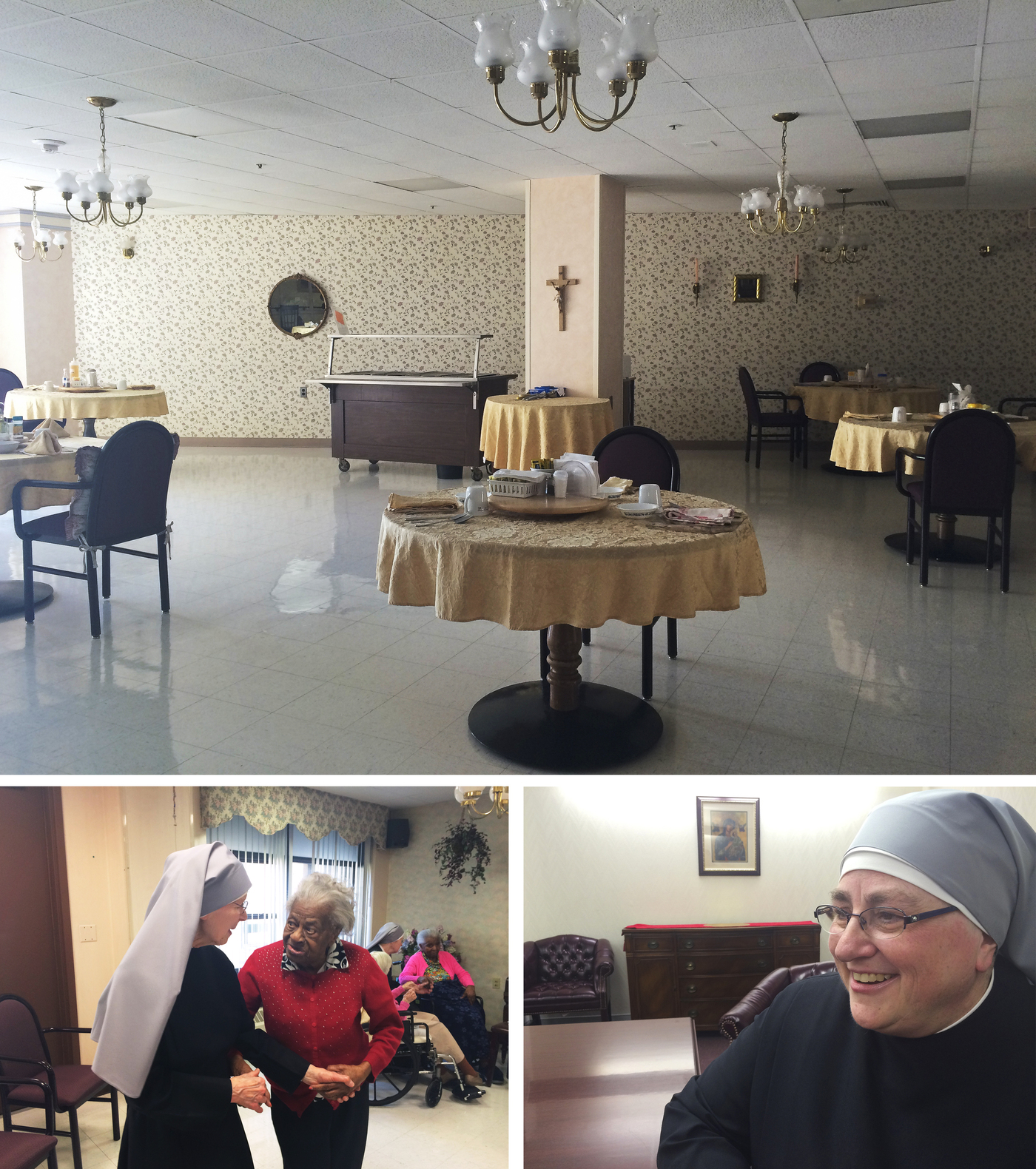 (Top) Cafeteria at a home run by the Little Sisters of the Poor in Washington, D.C. (Left) A nun dances with resident Alberta Wright. (Right) Sister Constance Veit.

Tanner notes that nationally 1.9 million students attend roughly 1,000 religiously affiliated schools, some of which object to birth control. As she sees it, requiring these institutions to opt out by notifying the government or the insurer of their objections does not impose much of a burden.

"The burden there is light," Tanner says. "The burden on the woman who will not have insurance access to contraception is heavy without some form of workaround for the religious objection."

Indeed, some 28 states impose much stricter requirements for birth control coverage. According to the Institute of Medicine, birth control is prescribed not just to avoid pregnancy but also to treat various female medical conditions — it is the most frequently taken drug for women ages 15-60. And it is expensive, $30 a month and more for pills, and as much as $1,000 for buying and having an IUD inserted.

Nobody doubts the sincerity of the various objecting religious entities, but seven of the eight appeals courts that have ruled on the workaround have said it does not impose a "substantial burden" on religious rights, that it does serve a compelling interest in providing health care, and thus does not violate the federal law known as the Religious Freedom Restoration Act.

In the Supreme Court on Wednesday, lawyer Paul Clement, representing the Little Sisters and other groups, will argue that the workaround is, in fact, a "substantial burden."

"The government itself admits that they can't provide the services unless they get this necessary information from my clients," Clement says. "When you force somebody to pay for somebody else's contraception, including forms of contraception that many religions view as abortifacients ... you are treading on religiously difficult territory."

That's not what this workaround does, replies University of Virginia law professor Douglas Laycock, who has filed a brief on behalf of the Baptist Joint Committee for Religious Liberty.

"This is the only time in 30 years of filing briefs that I've ever filed on the government's side in a free exercise case," Laycock says.

He acknowledges that "the metaphysical objections in this case may matter to the objectors religiously; but in any practical sense," he says, "this is the government's plan."

Indeed, Laycock notes, the insurer can't even put birth control coverage information in the same envelope with other information.

Those opposed to birth control argue that there are other ways to provide the insurance coverage without involving objecting institutions at all. Have a separate birth control package available on the Obamacare insurance exchanges, for instance.

But Sebelius replies that no such program exists.

"Having only women in an institution have to go sign up for some totally different plan, which doesn't exist, is not funded and would require an act of Congress to put in place, would place ... a huge burden on women to try to take advantage of what is highly recommended reproductive health services," she says.

Just two years ago, in another case, the Supreme Court seemed to suggest that the workaround created for religious nonprofits could be extended to some for-profit corporations. In this case, however, the court is being asked to eliminate the workaround altogether.

A decision in the case is expected by summer. With only eight justices on the court at the moment, it is possible that there could be a tie vote. Were that to happen, under long-standing practice, there would be no court opinion, and the lower court decisions would be automatically left in place. Since all but one of the appeals courts to rule on the issue so far have ruled in favor of the workaround, that would mean that in most — but not all — of the country, the birth control workaround would be left in place, until a full nine-justice court definitively resolves the issue at some time in the future.

In the audio of this story, as in a previous Web version, we incorrectly say that 1,000 religiously affiliated schools object to birth control. Only some of those schools do.