Accessibility links
The Many Masks Of Batman In 'Caped Crusade' Glen Weldon's book The Caped Crusade traces the evolution of Batman, and argues that his anger and obsession are only part of the character; his childhood anti-crime oath makes him a hopeful figure.

Michael Keaton's grittier Batman (left) and Adam West's more campy version (on the right) are just two of the many iterations of Bat-mania. Both images courtesy the Kobal Collection hide caption

Michael Keaton's grittier Batman (left) and Adam West's more campy version (on the right) are just two of the many iterations of Bat-mania.

Both images courtesy the Kobal Collection

This week Batman and Superman do battle on movie screens around the country in the much ballyhooed Batman vs. Superman. Superman is basically the same Superman he's always been. An all-American Golden Boy — albeit from the planet Krypton — fighting for Truth, Justice, you know the rest.

Batman, on the other hand, is a little different every time he appears on the scene. Sure, there are a few constants: the cape, the cowl, the Batmobile. But, depending on the decade, you might get the gritty growl of Michael Keaton, the straight-voiced camp of Adam West, or even the cheeky self-references of the LEGO Batman, played by Will Arnett.

And according to Glen Weldon's new book, The Caped Crusade, each iteration of Batman tells us a little bit about the culture that produced him. (We should also mention that Glen Weldon is a regular panelist on NPR's Pop Culture Happy Hour podcast, and writes for our website.) Weldon tells NPR's Audie Cornish that the very first Batman was actually a thug. "Basically, a guy who dressed up in a bat costume and would terrify his victims," he says. "He was an international man of intrigue, but he was mostly a bruiser." 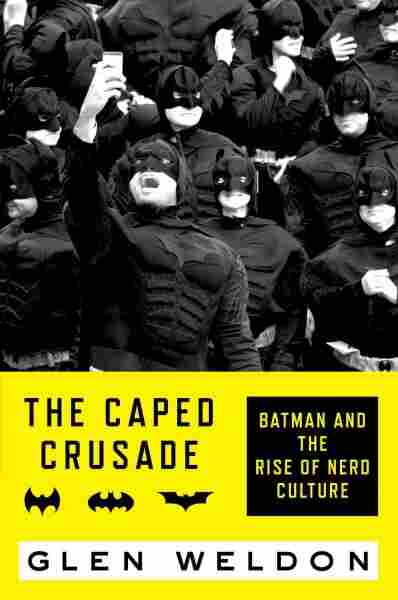 Batman and the Rise of Nerd Culture

In the '40s and '50s there was a crusade, led by a guy named Dr. Fredric Wertham, saying that comics were ruining literacy by breaking up sentences in word balloons — that was thought to be bad — they were presenting sexual imagery, violent imagery — he was kind of right about that, they were — but also that they were contributing to juvenile delinquency. He proved that by saying, look, I have all these juvenile delinquents, and they read comics. At the time, almost 95 percent of kids read comics, so that wasn't really the slam dunk he thought it was.

His crusade ... basically made a lot of the industry just go out of business, and decimated crime comics and horror comics in a big way. Superheroes hung on, but only by their white knuckles.

You gotta remember when this appeared — it was 1966. The popular shows were things like Bewitched, I Dream of Jeannie, Gilligan's Island. People wanted escapism. People wanted something that did not remind them of Vietnam, that did not remind them of political assassinations, of youth riots. They wanted something completely encased in a little hermetic bubble, and this fit the bill. This was silly — they just took the comics of the time and put them on the big screen without translating them, just put them on the big screen, but invested them with all of this gravity.

Comics, up until about 1970, were written for kids. And when the Batman television series died, the makers of the Batman comics realized they had to do something. So they said, we need to figure out how to give this character a personality, really, because up to then he'd been a cop in a cape, like a lot of other superheroes. So they decide to look back at the very beginning of Batman, where he has an origin ... and they saw this one panel, where this young boy, Bruce Wayne, decides he's going to dedicate the rest of his life to warring on all criminals. He swears an oath. This oath is a very, it's a childish notion, but that's its power, because he is not dedicated to going after the guy who killed his parents — he's dedicated to fighting capital-C Crime. And so they made Batman an obsessive.

On Batman and nerd culture

It's this oath, this idea that he will dedicate himself to the incredibly optimistic notion of 'never again' that makes him, ultimately, a creature of hope and not rage.

Batman is a great lens through which to view nerd culture; that's the whole argument of the book. The trait of nerds to insist that the grim, gritty, dark Batman is the only Batman that exists — which ignores more than 30 years of history, and does not permit something like the Batman character of the Adam West television show to exist — is just wrongheaded. Different people come to this character and bring different things to him. You can look at the Batman of Adam West, and you can look at Christian Bale's "swear to me" Batman and see that they're the same person. Not because of the Bat-ears, but because they're motivated by the same thing, which is the oath.

When I started this book, I thought I knew what I was going to get into. I had written a cultural history of Superman, where I realized that he is a flattering mirror to us; he is us as we want to be seen by the world. So I figured Batman must be the dark mirror, right? Things we don't want to admit about ourselves, like the rage we feel when we get cut off in traffic, the thirst for vengeance we feel when a fifth-grade bully takes our lunch money, just picking an example out of the air — but that's just the rage. You're looking and you're only seeing the first level. It's this oath, this idea that he will dedicate himself to the incredibly optimistic notion of "never again" that makes him, ultimately, a creature of hope and not rage.