Accessibility links
Movie Review: BORN TO BE BLUE An intriguing and partly fictionalized portrait of jazz legend Chet Baker runs on an inventive structure and a strong central performance from Ethan Hawke.

'Born To Be Blue' Finds Truth In Inventive Riffs

'Born To Be Blue' Finds Truth In Inventive Riffs 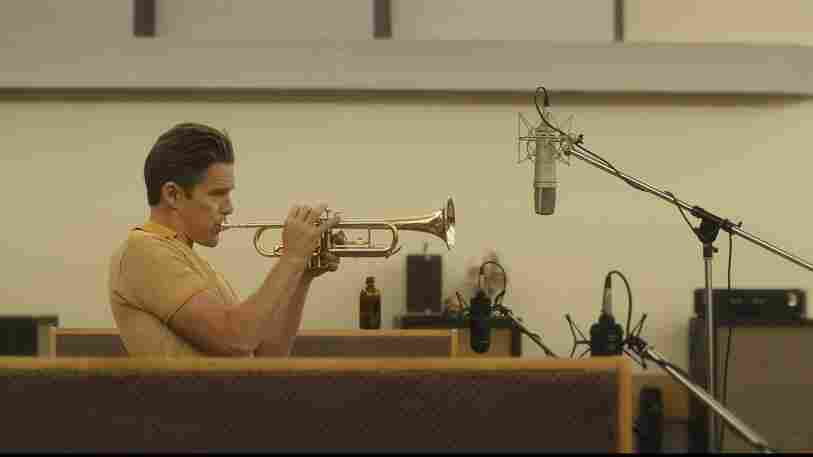 Ethan Hawke as Chet Baker in Born to Be Blue. Courtesy of IFC Films hide caption 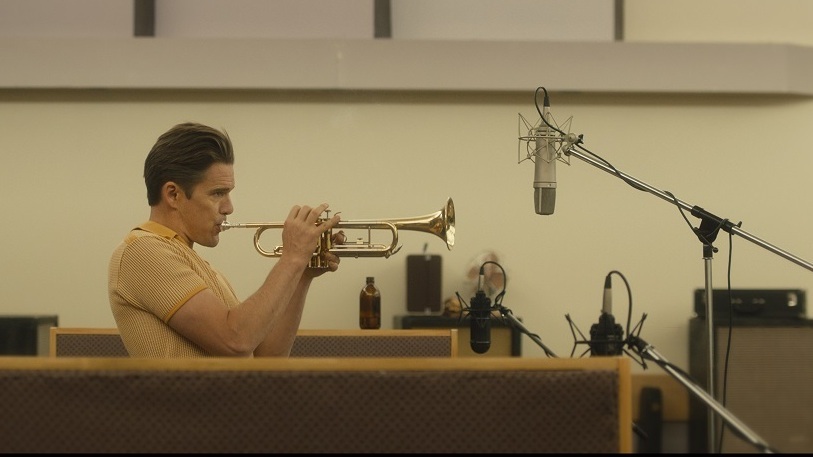 Ethan Hawke as Chet Baker in Born to Be Blue.

Now is a fine time for jazz trumpet fans to get lost at the movies. April will see the release of Don Cheadle's long-gestating Miles Davis biopic Miles Ahead, and this week we get the shaggy dog Born to be Blue, the story of Miles' contemporary Chet Baker. Both films are far looser and more experimental than your typical straight biopic, and concentrate almost exclusively on historic low points in their subjects' lives. And Blue even features brief appearances from Miles himself. But far from being a victim of redundant marketing, the Baker film is its own fascinating beast, bolstered by an inventive, reality-blurring script and a moving performance by Ethan Hawke.

It takes a moment to get our footing at the start — writer-director Robert Budreau doesn't make it easy. The film begins as Baker, on the mend from the heroin addiction that almost killed him in the mid-1960s, attempts to mount a comeback, despite a savage beating from a drug dealer that destroys his front teeth and his embouchure. All that stuff is more or less from Baker's actual life, but it's mixed in with a bold embellishment: He's approached by a Hollywood producer to play himself in a movie about his life, and promptly falls for Jane (Carmen Ejogo), the actress playing the second wife he divorced.

These two rejected figures of the '60s — the druggie has-been jazz legend and the struggling actress of color — try to support each other as they bounce between New York, Los Angeles, and Baker's prairie hometown of Yale, Oklahoma. We see some reenactments of Baker's hard-driving prime as part of the make-believe film, shot in black-and-white and with the frenetic pace of a really jamming hi-hat solo. In the present, he attempts to keep playing while deemphasizing the trumpet that made him famous, by blowing only long, simple notes and relying more on his singing voice for entire sets.

The conceit sounds like one of those "look at me, I'm a movie" gimmicks so beloved by mediocre indie filmmakers, but in practice, it's just clever enough to work. Like the "cool jazz" style Baker helped popularize, Born to be Blue is really a contrapuntal film. Budreau repeats the essential themes of his subject's early career on a different register in the movie-in-a-movie. The patient, passionate Ejogo reenacts the inner conflict every woman in Baker's life may have gone through, even as she plays that exact conflict in character. The result is a unique kind of harmony between the fact and the fiction, occasionally overwrought in the moments where Budreau focuses on petty jealousies between Baker and Jane. (The real Baker, with his handsome features, occasionally dabbled in acting, so the idea that he could play himself isn't too far-fetched.)

Twenty years ago, Hawke nearly played a younger Baker in a proposed Richard Linklater movie that never got off the ground. We should be thankful he finally got his chance here. Hawke gives the musician a rough boyishness that emphasizes both his bottomless charm and his frustrating immaturity. The fact that he does his own trumpet playing is also fitting, since this was the period in Baker's life where he was desperately struggling to regain his talents, and this makes his mediocre blows all the more painful. One moving shot depicts a tearful Baker, crumpled in the bathtub with his trumpet, pressing the instrument to his face as blood drains from his mouth. Later, Hawke nails a quivering, transcendent rendition of "I've Never Been In Love Before," singing like he is quietly emptying himself into the audience.

As Baker pulls every string to book his damaged goods in a studio session, followed by a comeback performance at influential New York jazz club Birdland, he feels once more the pull of the hard drugs that will eventually draw him back into their orbit. It may be a familiar theme, but the film nevertheless is fully honest about how closely the successes of so many jazz performers were tied to their vices. Baker concludes that without heroin, he can't play — and if he can't play, he's nothing. Emotional truths like that ring loud and clear throughout the film, amid all the fiction and the flourishes. And that kind of unexpected clarity among the noise is one of the things to love about jazz.