Accessibility links
'Batman V Superman' Review: Superheroes Adrift In A Grim Sea Of Studio Money Zack Snyder's follow-up to Man of Steel shows little inventiveness or spirit, and smells suspiciously like a studio's attempt to chase a rival, rather than a project allowed to develop creatively. 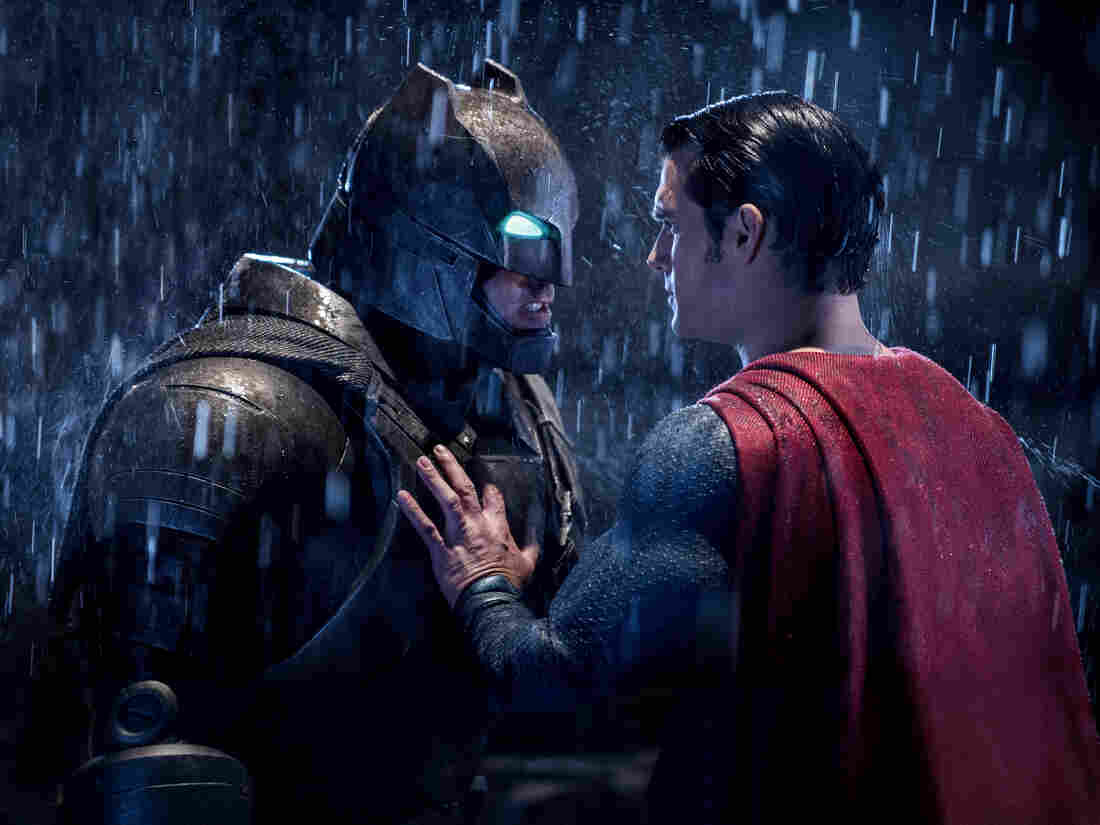 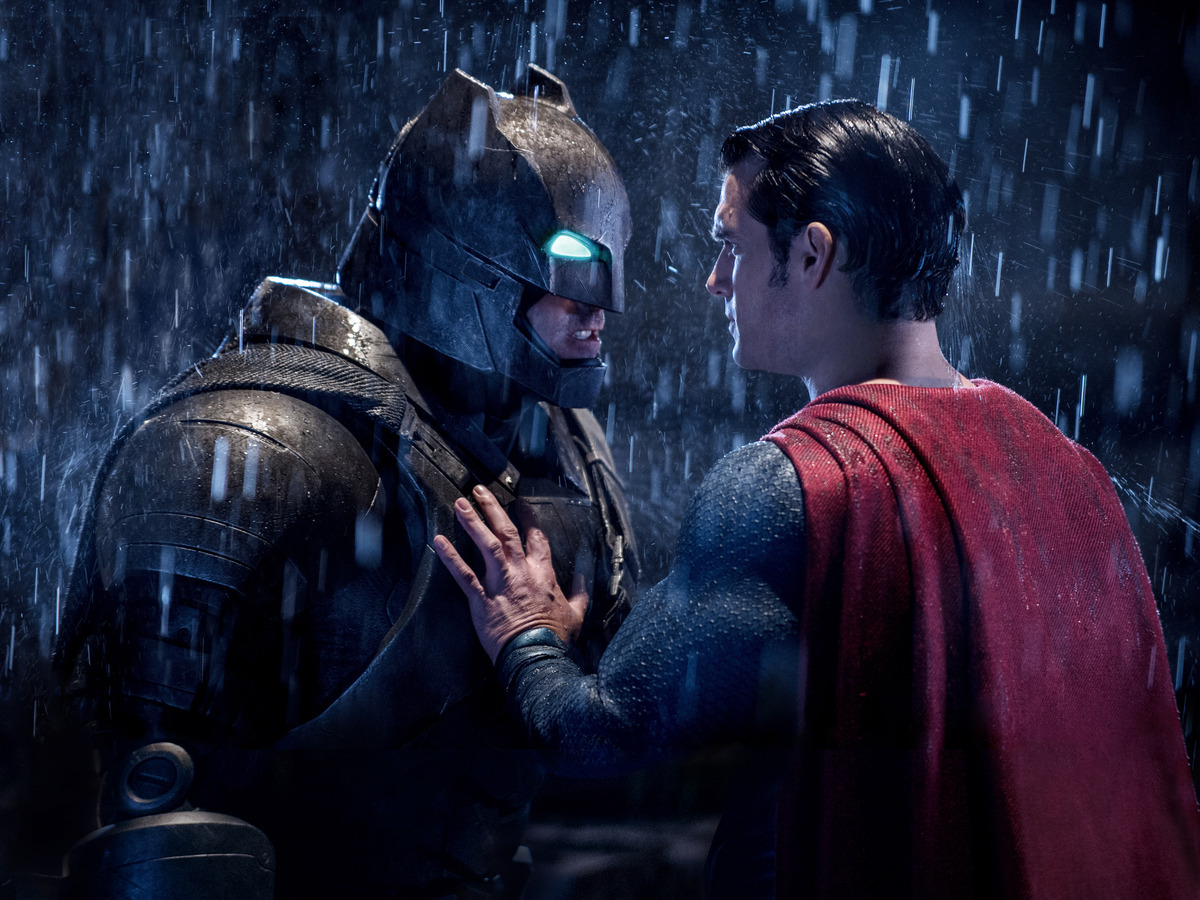 Ben Affleck as Batman and Henry Cavill as Superman in Batman v Superman: Dawn of Justice.

Comic books from several discrete decades get mashed up in Batman v Superman: Dawn of Justice, while swaths of real estate — uninhabited swaths, we're repeatedly assured — just get pulped. But no text is quoted more directly than The Dark Knight Returns, Frank Miller's influential 1986 tale of an over-the-hill Batman coming out of retirement to clean up a Gotham gone to hell. It was the greatest Batman story ever told, and it had the unforeseen side effect of draining every particle of sunlight out of superhero stories for years to come. But it hit far beyond the normal comics readership, foretelling our current era of superheroes as mainstream entertainment for grownups, and it helped publisher DC Comics briefly eclipse its chief rival, Marvel.

I bore you with this history because a generation later, DC — the home of Superman and Wonder Woman and the Elongated Man and Matter-Eater Lad — is chasing Marvel once again. DC was first to box office success by decades, scoring massive hits with Richard Donner's Superman in 1978 and Tim Burton's Batman in 1989. But the interconnected fictive universe wherein different heroes' stories overlap endlessly? Only Marvel has brought that to the movies, and only after it stopped licensing out its most popular characters (Spider-Man, the ever-shifting lineup of X-Men) and got into the biz itself. 2008's Iron Man was the test balloon. Now Marvel has a movie about The Inhumans on the way, a group of heroes (I'm guessing) that even a lapsed comic book nerd like me couldn't pick out of my Official Handbook of the Marvel Universe if the entries weren't alphabetized.

Knowing exactly nothing about it, I have to figure The Inhumans will be more fun to sit through than Batman v Superman, from Zack Snyder, the same guy who brought DC's other influential 1986 comic book to the screen in Watchmen. That film was R-rated and long and grim and dark and violent, averaging roughly one joke per 40 minutes. But it looks like Pee-wee's Big Adventure next to BvS, a ponderous, smothering, over-pixelated zeppelin crash of a movie scored by a choir that sounds like it's being drowned in lava.

This is what happens when you give a bad director a quarter-billion or so dollars while doing all you possibly can to make sure every creative decision he makes is motivated by sheer panic: Catch Marvel! Set up the next 10 movies! BvS has no room to breathe even at 151 minutes, 30 or 40 of which offer actual pleasure.

Here's the good 23 percent: Ben Affleck and Jeremy Irons have a nice rapport as Batman and butler/co-conspirator Alfred Pennyworth, now 20 years (and one dead sidekick) into the Batman's campaign of broken-kneecaps policing. (The Bat-Signal atop police headquarters suggests detente in law enforcement-vigilante relations, but a Gotham cop still shoots at Batman for some reason.) New-gal Gal Gadot makes an appealingly enigmatic Wonder Woman, if only because she's not forced to speak what should remain subtext the way everyone else is. Laurence Fishburne, returning from 2013's Snyder-directed reboot Man of Steel, gives the film a badly needed jolt of levity in his handful of scenes as Daily Planet editor Perry White. In BvS's sole inventive flourish, the chief complaint about its predecessor — Superman's failure to prevent a civilian body count in the thousands — is appropriated as Batman's motivation to take him down. The Battle of Metropolis is reprised from Bruce Wayne's point of view, and psychologically linked to the murder of his parents back in, um, 1981.

And at last we get the montage of Superman doing super deeds that Man of Steel denied us: He saves flood victims stranded atop their homes, he preserves the crew of an exploding rocket, he rescues a lady from a burning Mexico City high-rise. Instead of instantly blasting off to be the deus ex machina in another out-of-frame drama, he hangs around long enough for the Mexican crowd, many in Day of the Dead regalia, to lay hands on him. This scene looks like a Renaissance painting, and it conveys Superman's crisis of faith over whether he can actually inspire noble acts more eloquently than any of the movie's many thudding conversations on the subject. These mostly involve Amy Adams' Lois Lane or Holly Hunter's Sen. Somebody. (Wait — Finch. Sen. Finch.)

Maybe they tried to cast actors whose names sound like secret identities.

But Henry Cavill has been turned into a clay-footed Man of Steel, scrubbed of the humility and warmth he brought to his first flight. You can't blame his Kal-El for feeling hot and cold toward our kind, considering that Metropolis has erected a tacky statue in his honor at the same time he is being summoned before a Senate panel to ... explain how he saved Lois from mercenaries in the African nation of "Nairomi." Or something. Few films with "versus" in their title have ever been this hard to follow.

Still, I perked up when Superman walked into the Capitol, because I desperately wanted to hear him say something homespun and ennobling. ("It's not an 'S.' On my world it means hope," was a good line.) But writers David Goyer and Chris Terrio never give him the chance. When it comes to what exactly superheroes are supposed to do — buck up our own reserves of integrity and charity — they let Jesse Eisenberg's twitchy Lex Luthor do all the talking.

That's a major error, but not as bad as Warner Bros., DC's corporate parent, made when they decided they no longer have enough confidence in their flagship character to let this latest iteration of Superman carry another film or two before making him the Aaron Burr to Batman's Hamilton. They took away Superman's second chance — or maybe his second second chance, after 2006's mopey but underappreciated Superman Returns — and worse, entrusted this film and its already announced two Justice League follow-ups to Snyder. He is to filmmaking what artists like Rob Liefeld and Todd McFarlane are to comics: good at images, hopeless at storytelling. BvS is confusing before it gets boring, and boring before it gets bruising. But it hits all the dreary stations of the superhero cross eventually. Is it an accident the movie, originally slated for last summer, is coming out on Good Friday?

As with last year's Marvel bonanza, Avengers: Age of Ultron, there's an out-of-nowhere dream-or-prophecy interlude that we can only infer will be explained in some other flick a year or three from now. In BvS, that wacko hallucination is more intriguing than the film it interrupts.

Even the things the widely reviled Man of Steel did right — Hans Zimmer's stirring score, Alex McDowell's otherworldly production design, Cavill's warm smile in the last shot of the movie — are all buried here. And Wonder Woman's feats of strength against a generic computer-generated monster in the third act aren't nearly compensation enough for the sad fact that both of the women in Kal's life — Lois and his adopted ma, Martha Kent (Diane Lane) — get used as Super-bait and pushed around.

Once upon a time, Margot Kidder's Lois contrived to prove Clark Kent was really Superman by throwing herself off a building.

OK, it was Niagara Falls. My point stands.