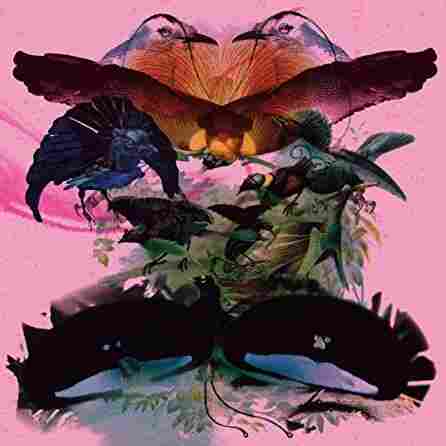 Brighton-born producer Leon Vynehall is already known for his beat-making acumen: His singles for imprints like Aus Music, ManMakeMusic and 3024 have been well-received, while his 2014 debut Music For The Uninvited made a bunch of year-end lists. His craftsmanship is such that even in a non-single track, like last year's Mario Kart ode "Midnight On Rainbow Road" (from the excellent Musik For Autobahns 2 compilation), his iridescent contribution stood out, even though it was a drum-free ambient track.

Gerd Janson, who compiled MFA2, is now releasing Vynehall's new album Rojus on his Running Back imprint. For the album's opening minutes, it feels like a continuation of "Rainbow Road" — all shimmering synths, bird calls and warm drifts. If it sounds paradisiacal, that would be because the title Rojus is the Lithuanian word for "paradise." But soon afterward, a floor tom thumps and "Saxony" springs to life, paired with skipping snares, thrums of harp and the kind of "ahhs" your dentist might elicit.

Another sigh leads into "Beau Sovereign," but the exhalation is more sensuous this time. Vynehall juggles handclaps, heaving strings and a body-quickening thump as a voice incants in your ear — "Your love / is what I want / is what I need" — and the album shifts from lush garden to amorous dance floor. The eight-minute "Blush" is anything but modest. Using a drum tone that nears "live," Vynehall uses the bass drum, a pistoning hi-hat and the incessant plink of a piano key as the foundation for a track that keeps soaring toward a peak, as exalting voices take it even higher.

It all leads to the album's pinnacle, "Kiburu's." Again, Vynehall draws on the thematic sounds that have built most of the album: voices snipped into percussive gasps, rollicking drums that swing just off the grid, and — as the track verges on the delirious — bird-call samples that swoop in to ecstatic effect. Vynehall has said that a National Geographic documentary on the mating rituals of birds of paradise led him to parallel their colorful plumage to those of club dancers and their moves. As Rojus slowly winds down to a breathless finale, it shows how a sweaty, pheromone-filled dance floor can also double as paradise.