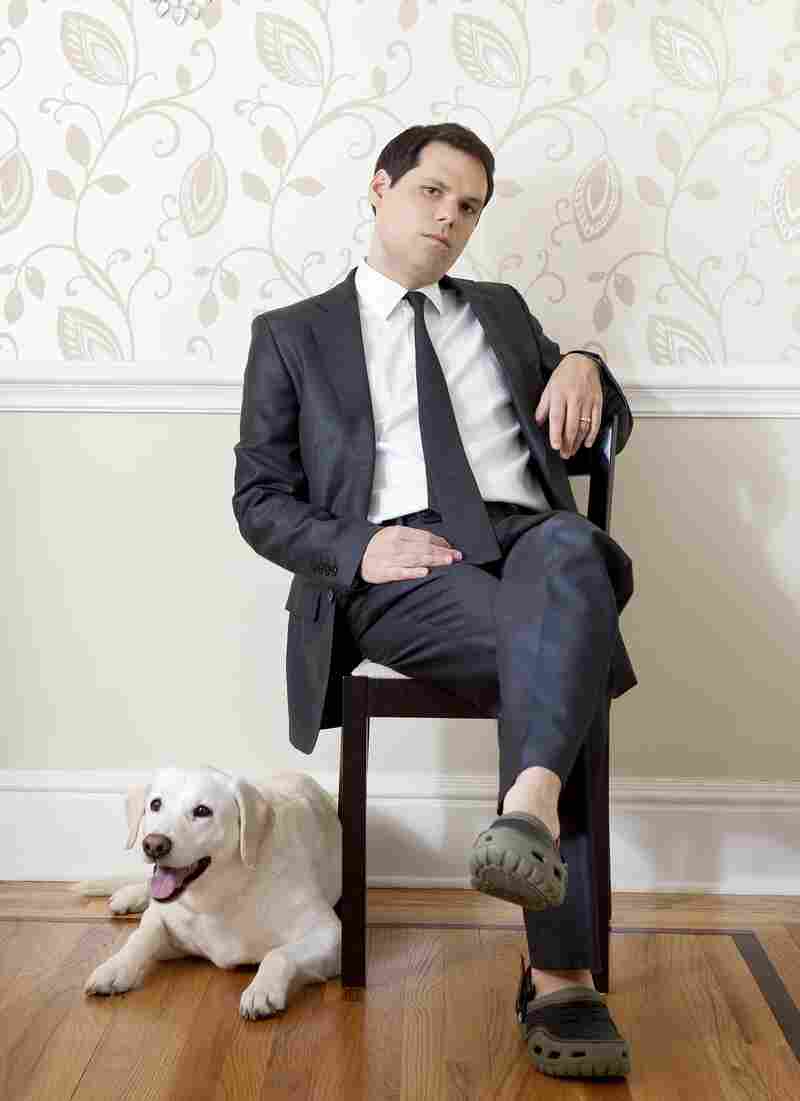 Michael Ian Black co-stars in The Jim Gaffigan Show on the TV Land network, and in Another Period on Comedy Central. Gallery Books hide caption 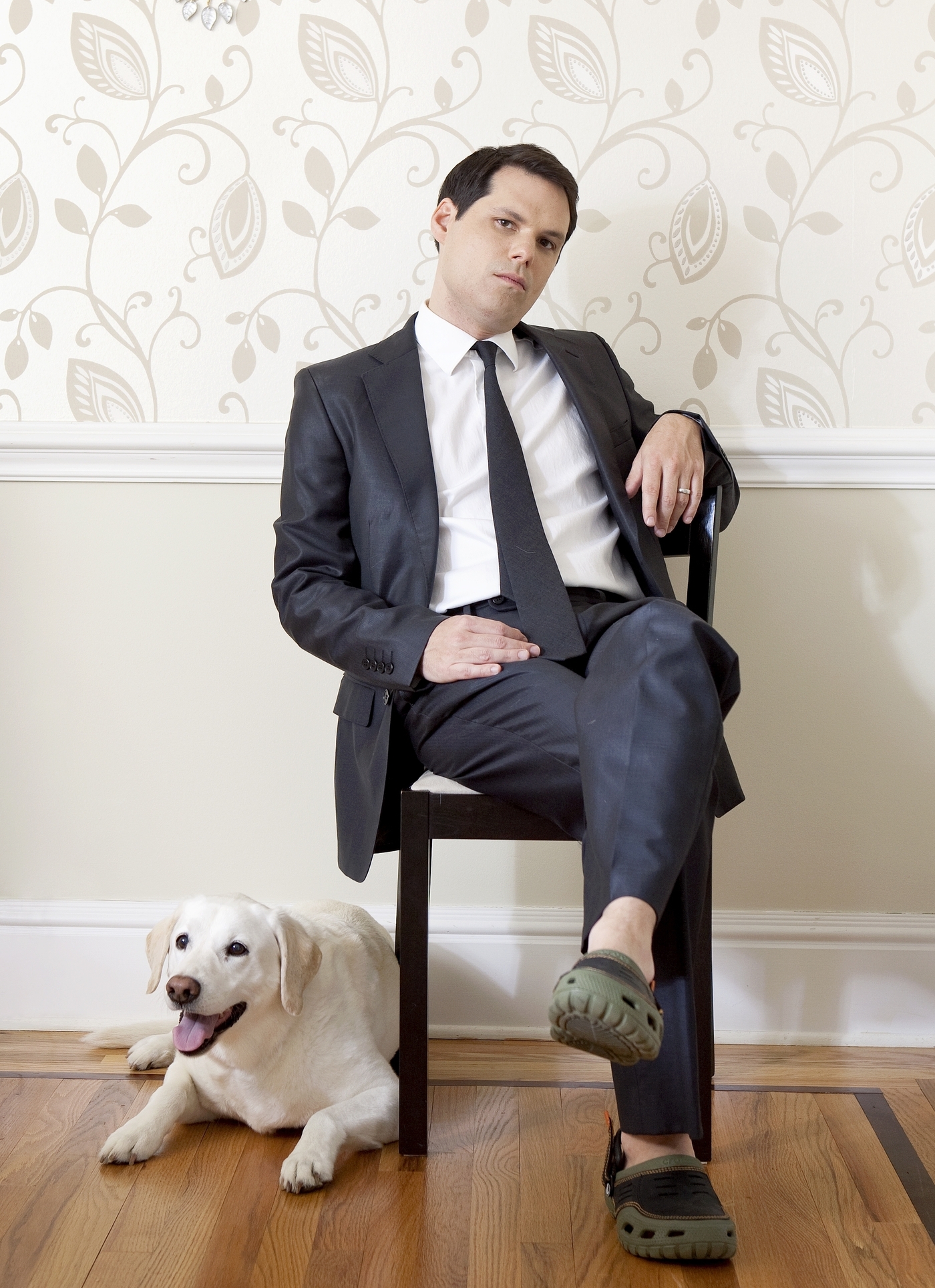 Michael Ian Black co-stars in The Jim Gaffigan Show on the TV Land network, and in Another Period on Comedy Central.

Michael Ian Black has appeared in movies and TV series for more than two decades, but he tells Fresh Air's Terry Gross that he still has a hard time looking at himself onscreen.

"When I'm acting, I always imagine myself as looking totally different than the person that appears onscreen," Black says. "And then when I see that person appearing onscreen, I'm inevitably disappointed. I'm always like, 'Oh no! Not that guy! That's not the guy at all that I had pictured.' "

Black chalks up his reaction to "male vanity," a subject he explores in depth, and with much levity, in his new memoir, Navel Gazing: True Tales of Bodies, Mostly Mine (But Also My Mom's, Which I Know Sounds Weird). He says he wanted to "lay bare" his insecurities in the book in a way that would open up a conversation about male body concerns.

Black's book focuses on aging, family and the body, subjects he started thinking about seriously after his mother got sick and he turned 40. Black notes that taking responsibility for family members who need him, including his mother and his sister, who has Down syndrome, has deepened his understanding of what it means to be a man.

"What I'm learning about masculinity as I get older is a lot of the kind of male archetypes ring true to me," he says. "The idea of the man shouldering a burden and doing it willfully, that rings true to me. I feel like it gives me purpose and it gives me optimism in a way."

On what he sees when he looks in the mirror 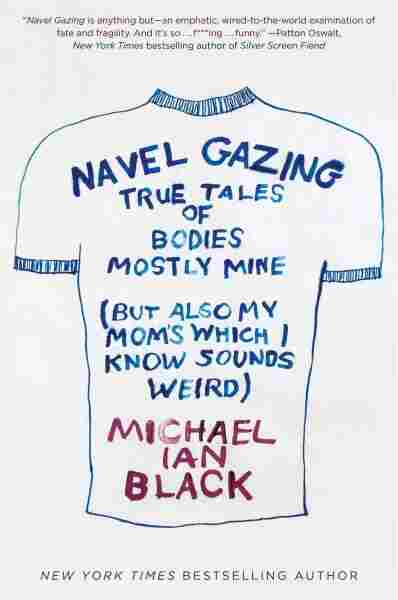 True Tales of Bodies, Mostly Mine (but Also My Mom's, Which I Know Sounds Weird)

All I see, and I think women are probably the same, all I see are the imperfections. I see that my nose runs off to the side of my face; I see that one eyebrow cocks upwards no matter what I do to try to correct it. Inevitably I'll wake up and there will be some blemish on my face that wasn't there the day before. My stomach, which continues to expand. My arms, which continue to be noodley and flaccid. Like, it's everything. So it's just a constant cataloging of all the things that are wrong, and it's not even like I feel like addressing any one of those things would solve the problem. I feel like it would just start other problems. It's unsettling.

I don't know how to make myself feel good about myself physically, other than to just sort of resign myself to "I am who I am." ... It's not something that is ever-present in my mind, but it is something that — it's a little tickle at the back of my brain that I can't ever quite scratch.

On interviewing his mother about facing death

All of the dialogue that's in the book is verbatim from interviews that I did with her for the book. ... She's been dealing with this for, like, 15 years, these illnesses and her body slowly failing her. And I guess I sort of thought, at a certain point in dealing with constant illness and bodily deterioration, that you make some accommodations with death, and she hasn't. When I asked her why she felt so terrified of dying, she said, "Because I feel like I haven't done anything with my life." And that was such a kind of heartbreaking and startling and upsetting thing to hear from one's parent. It wasn't at all the answer I expected. ...

She meant that on a kind of macro-level, in a way of like making a mark on the world or doing something creative or doing something professional that would have some lasting impact on society, and I found it upsetting to hear that she felt that way. And also, it is so at odds with how I look at my own life, because I don't feel any of those desires, even though I'm in a very public profession where I'm constantly sort of putting myself out there and affecting the culture in some tiny, tiny way. I feel no desire to leave any kind of legacy whatsoever, other than with my kids. I didn't know how to reassure her ... that being a mother and having love in her life and having a family and people who care about her is enough.

On his mother coming out in the mid-1970s

She came out as a lesbian when I was about 5, and that broke up my parents' marriage, not that it was on very firm footing to begin with. And then she entered a very long kind of abusive relationship — which is the relationship that I grew up within — with a woman I call Elaine in the book. We talked a lot about the traumas of her sexuality, and a lot of it was traumatic. Her parents forced her to undergo shock therapy when she was in her late teens ... to "un-gay" her. ... In fact, it kind of wiped her memory clean of a lot of her early life.

They started by saying that "it's totally natural and fine to be gay," and my first thought was: Had I said something that made them think that I disapproved of their relationship? Which I did, but not because of their homosexuality, but because it was just a disastrous relationship. And then over the course of the conversation it occurred to me that they were talking about me.

I was probably 13, 14, something like that, and I was mortified and infuriated and it was so presumptuous of them and crossing so many boundaries. I didn't even know how to respond. I was just sputtering with rage when they said this to me. In retrospect, I get it. I do understand why they thought I may have been gay, and the answers are because I was interested in theater and because my friends were mostly female and because, I don't know, I maybe expressed myself a certain way or spoke in a certain way.

On how he rebeled against masculinity when he was growing up

I grew up in New Jersey. My formative years were kind of the mid-'80s, and the mid-'80s in New Jersey became kind of like ground zero for American culture in general. It was sort of like where Bon Jovi came from and the big hair sound and the kind of dumb metal culture that pervaded America in that time. And there was a huge emphasis on sports in the town where I grew up in, and there was just a kind of masculine swagger that guys had. And they were expected to, I don't know, have letter jackets and be interested in cars and be interested in talking about football teams, and none of that meant anything to me.

It's a familiar story. I think a lot of boys grow up feeling that way, but I didn't have a dad in my life. My dad died when I was 12 and my parents were estranged anyway, so I didn't see him that much. And I just didn't know that I didn't have to conform to that. I sort of intuited it, and the way I rebelled was to do things that were sort of anti-masculine. I would cross my legs the way a girl crossed her legs, or I would dress in a way that didn't conform to the way the guys in my school dressed. And I surrounded myself with female friends, and all of that was an attempt to assert myself as an individual and as a kind of young man, but I didn't fully understand that at the time about myself. It all felt improvisational. It all felt like a kind of formless rebellion.

On getting cast as gay characters

I'm almost always hired to play gay. Like, it's never left, that whole thing. My first movie role was in Wet Hot American Summer, where I play a gay counselor. I've played gay in so many things. It's like with anything else, you just kind of make peace with it at a certain point. I can do that for you. I can do other things and hopefully people will see me and let me do other things, and they have thankfully, particularly in recent years. But yeah, I always get hired to play gay.

As much as the responsibilities sort of pile on top of each other as I've gotten older, I also find myself increasingly happier.

On having more responsibilities, like caring for his mother, his sister with Down syndrome and his own family

As much as the responsibilities sort of pile on top of each other as I've gotten older, I also find myself increasingly happier. And I don't know if that's just the kind of natural aging process or [if] that's a result of the anti-depressants I'm on, or what it is, but I'm happier than I've ever been and feel a sense of gratitude almost all the time when I stop to think about it, which is often actually. ... I guess I like having that on my shoulders.

On worrying about losing his house

Read an excerpt of Navel Gazing