Accessibility links
Cleveland Readies For Protests Ahead Of Potentially Volatile GOP Convention The city's police are buying riot gear and bringing in officers from other cities to prepare for a political convention that could draw protesters from across the political spectrum. 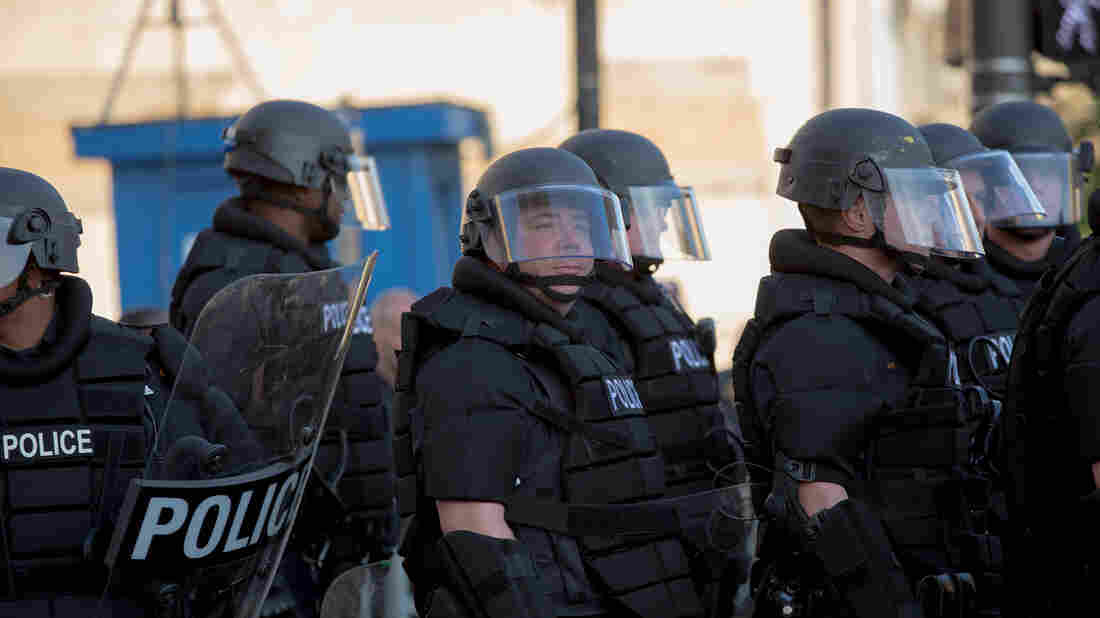 Police stand guard during demonstrations in reaction to a Cleveland police officer being acquitted of manslaughter charges on May 23, 2015, in Cleveland. Ricky Rhodes/Getty Images hide caption 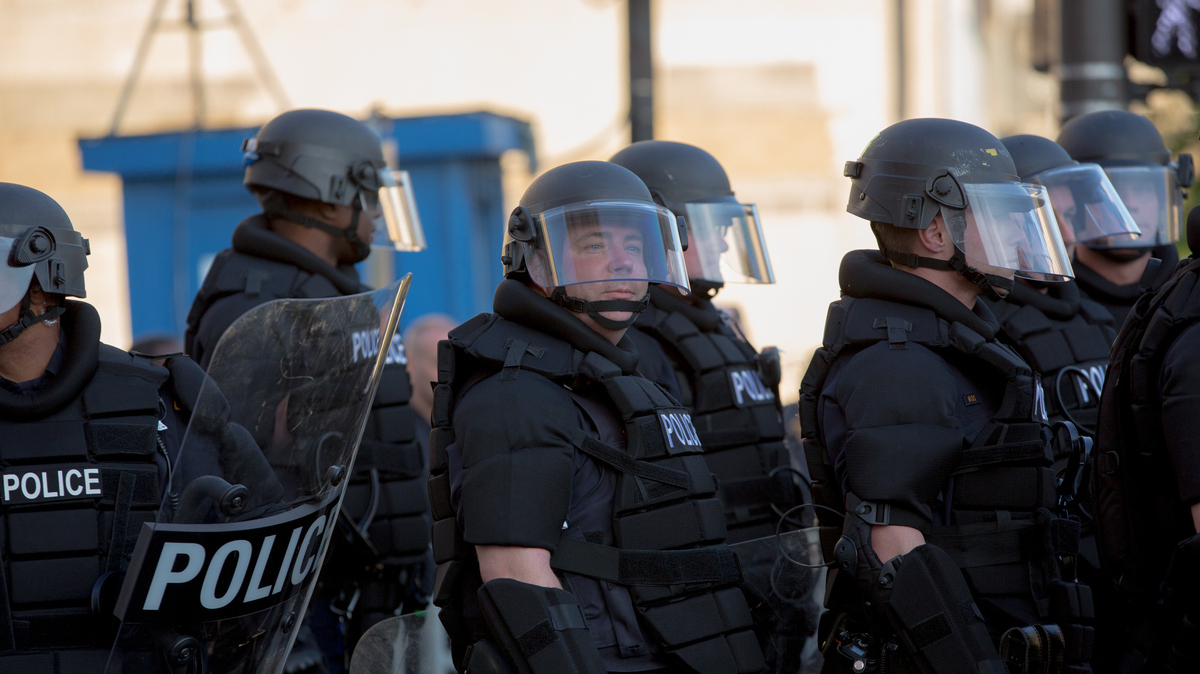 Police stand guard during demonstrations in reaction to a Cleveland police officer being acquitted of manslaughter charges on May 23, 2015, in Cleveland.

As Cleveland prepares to host the Republican National Convention in July, one question seems to be fueling more and more conversation: whether or not Donald Trump wins the nomination, will his rowdy rallies — and the accompanying protests — follow him to Cleveland?

There have been shoving matches at Trump's events, and supporters have punched protesters. Speaking on CNN recently, Trump even mentioned the possibility of riots if the nomination were taken from him in a contested convention.

Moreover, the recent bombings in Brussels have put police departments across the country on a heightened state of alert.

Cleveland officials and the Secret Service offer few details about their plans, but say they're working to ensure a safe week.

"This is going to be a secure event," Secret Service spokesman Kevin Dye said, declining to elaborate.

Cleveland plans to buy barricades, bicycles, batons and 2,000 sets of riot gear, along with other equipment.

The city and Philadelphia, which is hosting the Democratic National Convention, have each received $50 million in federal grants to cover security expenses.

Chunks of that money will pay for out-of-town police. Cleveland's 1,500-officer force will be working 12-hour shifts, and another 2,500 officers are expected here from neighboring departments and out of state, according to City Council safety committee chairman Matt Zone.

Steven Loomis, the president of the patrolmen's union, has said that it's taking too long to order and deliver the riot gear.

"You can't do the proper training until you have the proper gear to train with," Loomis said. "It's a huge, monumental job that they're asking us to do, and they need to give us all the support that they can in order for us to do it, and do it safely."

This week, a group of Cleveland civil rights activists urged the city to divulge more about its planned equipment purchases.

Jacqueline Greene, an attorney with the Ohio branch of the National Lawyers' Guild, said she and other advocates wanted "the immediate release of the entire list of equipment to be purchased for the RNC."

The police department's recent history adds to their concern. Cleveland police agreed last year to a series of reforms after a Justice Department investigation found evidence of a pattern and practice of excessive force.

Cleveland has seen numerous nonviolent protests over shootings by police, and most have ended without arrests.

But last year, after an officer was acquitted of manslaughter charges, police cornered demonstrators in a narrow street between buildings and arrested about 70 people. Many were held over the weekend, effectively shutting down the major part of the protest.

The American Civil Liberties Union of Ohio sued the city, and Cleveland police agreed to a new mass arrest procedure.

"If you're going to abuse the Constitution in that way on an easy matter," Nelson said, "then what are you going to do when things get serious, like they may get with protests around this Republican National Convention?"

'You Have To Prepare For The Worst'

"You have to prepare for the worst," Castor said. "And if you don't use that equipment, that's great. But if there's a need for it and you don't have it, that will be an issue."

Castor made sure officers were trained to de-escalate situations and says that she didn't want to send police out in full riot gear to confront protesters.

"That sends a message that there's an expectation of trouble, and that's not what we expected," she said. "We met with everyone, we set the ground rules, and we expected everybody to abide by them."

A tropical storm also likely dampened enthusiasm for big outdoor protests. In the end, there were few arrests in Tampa, Castor said.

But Castor said the temperature of this election could present Cleveland with a different set of challenges than Tampa faced.

"I believe that Cleveland is going to have a much more difficult time than we had down here in Tampa, for a number of reasons," Castor said. "But the most apparent is just the volatility in this election process."